Sherwood brought back to Spurs as Poch leaves for Argentina 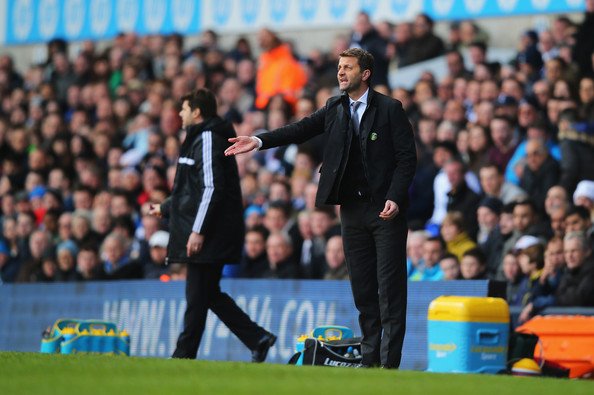 The two managers met last season during Spurs' 3-2 home win over Pochettino's Southampton - an exact replica of the scoreline that The Saints lost to Tottenham earlier that season.

Mauricio Pochettino has left Tottenham Hotspur just weeks after joining from Southampton to succeed Tim Sherwood - now the Englishman has been reinstated in his old post in the Spurs dugout.

Sherwood took over from Portuguese manager Andre Villas-Boas in December of last year following a poor run of results, and guided Spurs from 7th place, where 'AVB' left them, to 6th place to comfortably secure a spot in this season's UEFA Europa League.

He was given a contract which was to last just over one year, but left the club at the end of the season, and Pochettino was hired by chairman Daniel Levy, who was confident that the man from Argentina would be able to deliver success to the club, who many feel were weakened following the world record transfer of Gareth Bale to Real Madrid.

With the money that was made from the sale of the Welshman, Spurs invested large sums of money into new signings, but only a couple of them came good last season, while the likes of Spanish striker Roberto Soldado, who cost the club £13 million with clauses in the transfer that could see the fee rise to around £26 million only scoring six goals in 28 league appearances.

But players like Christian Eriksen and Vlad Chiricheș were well received by the Tottenham faithful, and going into this season there was a lot of optimism from supporters about the club's future.

But with Pochettino leaving for his native Argentina for unknown reasons, Sherwood was given another chance by Mr. Levy. But with this clean slate, can the 45-year-old make the expectant fans happy this season like he couldn't last year?
Login to Quote

Oz96
6 years
Good luck, I will keep an eye on this story.
Login to Quote

AlexTHFC
6 years
o.O Why Levy why

Sherwood out to impress doubters with changes imminent 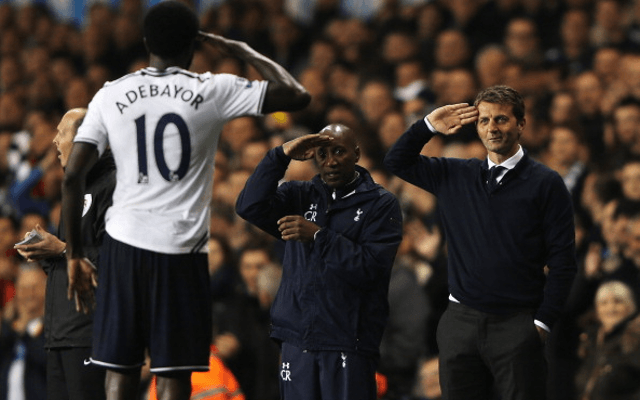 Salute: Adebayor celebrates with boss Sherwood and assistant Chris Ramsey but has now been told that he'll be leaving the club this summer.

A number of clubs have been on red alert following Tim Sherwood's confirmation that Togolese striker Emanuel Adebayor and club captain Michael Dawson will be allowed to leave the club this summer.

Adebayor had been Tottenham's top goalscorer in all competitions last season, but the 30-year-old is clearly not in Sherwood's plans for this season.

The Togo international scored 14 goals in all competitions last season, and the former Arsenal, Manchester City and Real Madrid man, whose first spell at White Hart Lane came in a loan deal from City is understood to be upset at Sherwood's decision.

He didn't have the best of relationships with previous boss Andre Villas-Boas either - the Portuguese manager told Adebayor to train with the youth squad following a dispute. 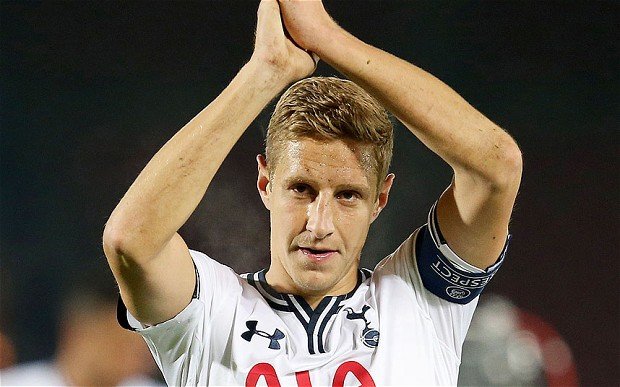 Meanwhile, long serving defender Michael Dawson will also leave the club, with many supporters reluctantly agreeing that ex-England international would be better to leave the club.

Dawson joined the club in 2005 from Nottingham Forest, and was made captain in 2012, but many fans have been noticing mistakes that the 30-year-old has been making and agree with Sherwood's decision to part with him.

"Emanuel is set to leave the club, we've heard offers from a few clubs and we're prepared to let him go for the right price. He has been a key player for us during his time at White Hart Lane and I have got to know him very well, but this club needs to take the next step this season and qualify for the Champions League, and I think we need more quality up front to do so, no disrespect to Adebayor. We've got the money to be able to seriously compete, and I don't want to be responsible for another season of disappointment."

"As for Michael, he's at the age now where complacency creeps into his game, and we're seeing the effects of that from time to time. He has been a great servant at the club and it will be sad to see him go, but he'll understand that we need to head in the right direction and to do that we need to make cuts."
Login to Quote

AlexTHFC
6 years
Praise you, Tim. Praise you very much.
Login to Quote


Sherwood out to impress doubters with changes imminent


What doubters, he is a living Spurs legend


Tottenham Hotspur will be without England winger Andros Townsend for the opening three months of the 2014/2015 season after he tore his hamstring in the club's 2-0 loss to Mexican side Cruz Azul in pre-season.

Townsend was unable to carry on after pulling up during a sprint in the second half as Tottenham crashed to their first loss since Tim Sherwood's return to the club. 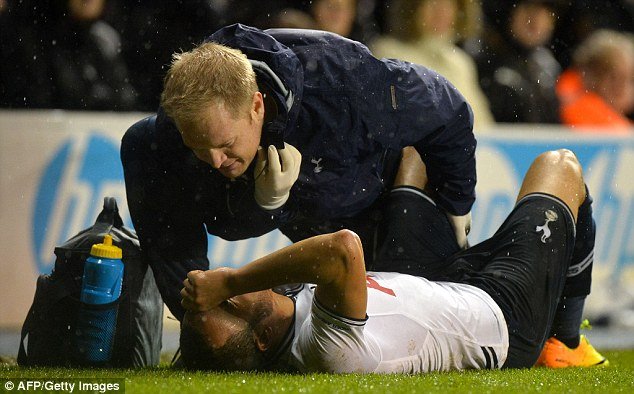 Sherwood has confirmed that Townsend is likely to miss at least three months of the new Barclays Premier League season, adding that head physiotherapist Wayne Diesel advised him to avoid playing the winger until he is "100% fit" in case the injury is aggravated.

"We're disappointed that Andros will miss the first few months because there's going to be some tough games that would have been made a lot easier with Andros fully fit." told Sherwood.

"We'll see how we go in the rest of pre-season, but if he is a big loss for us, then I'm going to have to pull out of some very important and exciting transfers that I think the fans would have been very happy with."

Spurs kick off the season against Stoke City at White Hart Lane, but Townsend could miss games against the likes of Chelsea, Liverpool, Manchester United and Manchester City.
Login to Quote 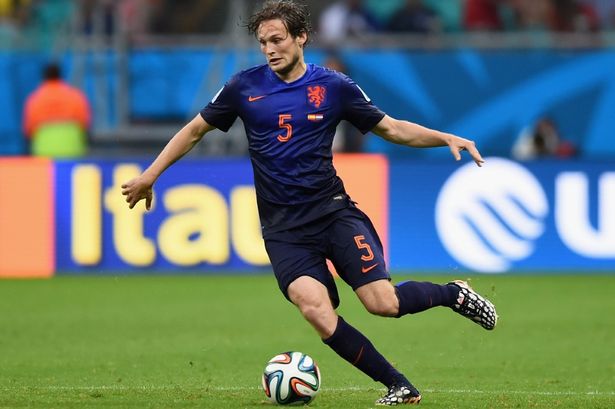 Tottenham Hotspur have stopped new Manchester United manager Louis van Gaal from reuniting with Daley Blind, who he worked with at both Ajax and at international level with Holland.

Blind, who is a defensive midfielder, joins from Ajax for a fee of £12 million, with Manchester United missing out on the chance to bring the highly rated player to Old Trafford.

The 24-year-old started his career as a left back, but was successfully trained to play as a defensive midfielder by none other than van Gaal.

The Holland international, who is the son of former Netherlands and Ajax defender Danny Blind, starred for his country at the 2014 World Cup in Brazil, where his side finished in third place, beating the host nation 3-0 in the third place playoff. Blind scored his first goal at international level in that match, but also assisted Robin Van Persie superbly in Oranje's World Cup opener.

Sherwood is likely to play him alongside Brazilian midfielder Sandro. Blind was reportedly a target of Spanish giants Barcelona, but no bid was made from them or Manchester United. Van Gaal has refused to comment on his failure to capture Blind.
Login to Quote

Ducksworthh
6 years
Great signing, especially for that kind of money. If you keep up this kind of result for upcoming deals the future is very bright for Tottenham.
Login to Quote

Adebayor and Dawson sold by Spurs as reshaping continues 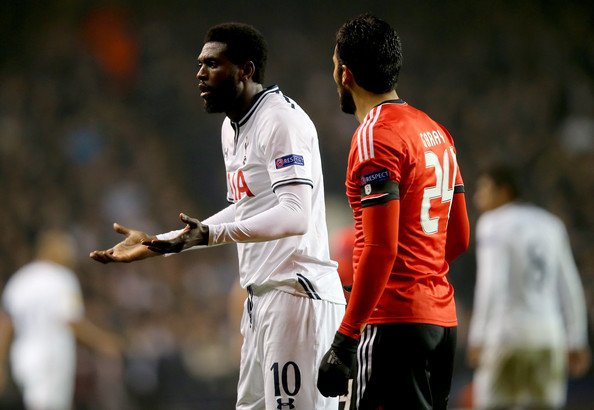 Adebayor has signed for S.L. Benfica, who knocked Spurs out of the UEFA Europa League last season, and now the Togolese striker has joined the victorious side for £11 million.

Manager Tim Sherwood announced earlier this week that both Adebayor and Dawson would leave the club during the summer transfer window, and he has delivered on those promises.

Adebayor, 30, was Spurs' top goalscorer in all competitions last season, hitting fourteen into the back of the net, but Sherwood told Sky Sports earlier last week that Tottenham needed to be braver in the transfer market, adding that the club needed to strike deals for quality players in order to compete for a Champions League spot next season.

Benfica are looking to add to their squad following a mass exodus in the summer, selling ten players and loaning several more out, including Lazar Markovic's £20 million move to Liverpool. 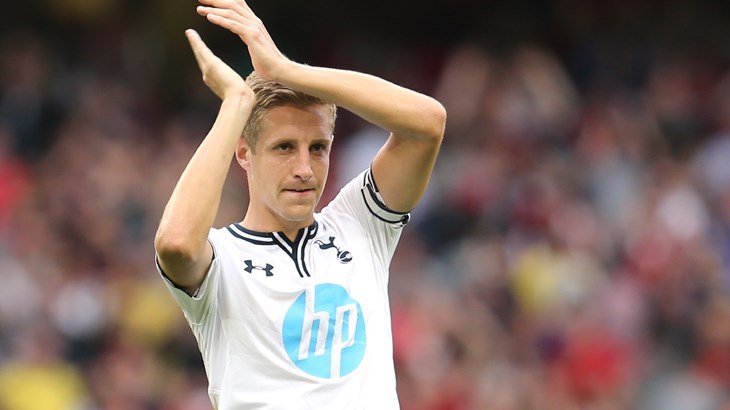 Club captain Michael Dawson, 29, has also left the club after nine years at White Hart Lane. He joined from Nottingham Forest in 2005 and played in over 200 league games for the club, but was offered out to Premier League and Championship clubs, with Southampton taking them up on the chance to sign the former England defender.

Southampton also hold an interest in Spurs centre back Younes Kaboul, but may well withdraw that interest following the signing of Dawson.

New manager Ronald Koeman has already signed the likes of Graziano Pellè and Dušan Tadić, and have now added Dawson to their team for a fee of just under £6 million.

It has been reported that Spurs sold Dawson to Southampton to build a good relationship with the club to make their pursuit of French midfielder Morgan Schneiderlin easier.

Oz96
6 years
A really great prices for Adebayor and Dawson, also I like the signing of Blind because I rate him too. Looking forward for next signings!
Login to Quote

Joe
6 years
Blind is brilliant! Some nice sales as well!
Login to Quote

Spurs finally get their man after weeks of chasing 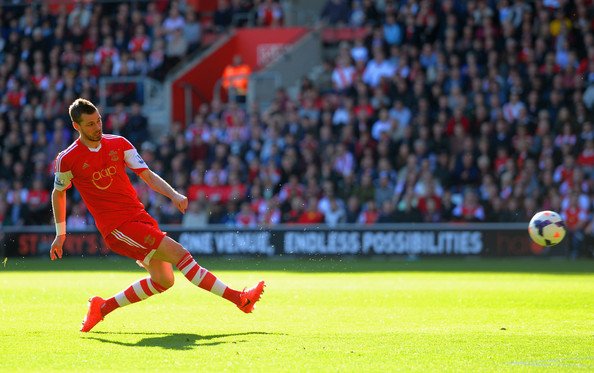 After negotiating with Southampton for almost a month, stretching back to when Mauricio Pochettino began his (very) short spell at White Hart Lane, Tottenham have finally wrapped up a deal to bring French midfielder Morgan Schneiderlin to London.

Schneiderlin featured in France's 0-0 draw with Ecuador in the FIFA World Cup in Brazil earlier this summer, but Tottenham held an interest in the player due to his performances for Southampton during the 2013-2014 season.

Initially it was Pochettino who wanted to reunite with the Frenchman, clearly impressed by what he saw of Schneiderlin while he was managing Southampton, but following the Argentinian boss' departure, it was unclear whether Tim Sherwood would continue to pursue him.

On Tuesday, it was announced that Spurs captain Michael Dawson had left the club to sign for Ronald Koeman's Southampton (for a fee believed to be in the region of £5.75 million), in what many tabloids called the first step in the signing of Schneiderlin.

Two days later, Southampton announced that they had accepted two bids for the midfielder, who joined from Strasbourg. Tottenham would compete with Monaco for the signing of Schneiderlin.

Monaco are understood to have had a bid of £11 million accepted, while Spurs paid a lower price of £8.5 million, but clauses in Schneiderlin's contract could see the fee rise to around £10 million.

Tottenham were able to bring Southampton down from the initial asking price of £30 million earlier in the summer, and now the Frenchman will join up with the rest of the squad at Enfield Training Centre in preparation for the new season.

Schneiderlin becomes the latest player to leave Southampton this summer, with four moving elsewhere earlier in the transfer window.

Koeman has been working hard to bring in replacements and has signed the likes of Graziano Pellè , Dušan Tadić and Jô already.
Login to Quote

Xander
6 years
Looks like Schniderlin is set to be a good signing, he should flourish at Tottenham and have an even better season. Hopefully you can get him to play well.
Login to Quote

Joe
6 years
Schneiderlin will be a great signing!
Login to Quote

You are reading "The Legacy of Tim Sherwood".