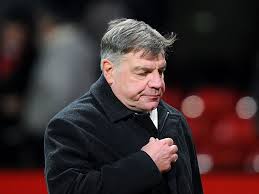 West Ham United has announced that Sam Alladryce has resigned from the managerial role at the London club. The West Ham United owners David Gold and David Sullivan as arranged a press conference this afternoon. We assume they will explain why 'Fat Sam' has stepped down and there plans for a new manager.

'Fat Sam' hasn't been in the fans best books for the last year as they want to play 'attractive football' that Allardyce couldn't provide to the club. Allardyce one dimensional tactics were just clear the ball to ex-Liverpool striker Andy Carrolls head. When Carroll was injured which was a large majority of last season the Hammers looked simply lost.

Sam Allardyce led the club to the Barclays Premier League after the play-off final win against Blackpool at Wembley Satdium. He also kept them up two seasons which kept he fans happy. The fans began to become comfortable in the top flight and wanted to play better quality football and better value for money transfers. When Allardyce was asked to provide these demands, he ignored them. The fans sent various threatening and abusive mail to the manager.

On a west ham fansite Jack Smith commented 'Yes! Great move by Allardyce, he is finally giving our club a chance to progress. I'd love to see a former player take charge.' Liam Harris also commented 'Thanks for the promotion and keeping us up but we need to progress and that wouldn't of happen if you stayed.'

David Gold 'accidentally' favourited a tweet suggesting that Allardyce is getting the sack, could this be the reason he left? We shall find out in the next couple of hours, stay tuned for the latest!

Ziechael
6 years
A promising start for sure, keep it up and i'll do my best to create a banner for you that does it justice

If not, it'll definitely help, anything else just ask in chat... someone will be sure to help out

David Gold - Welcome everyone to the press conference. As you know Sam Allardyce resigned earlier today and Me and David are here to release our statement. We are willing to answer most questions

David Sullivan - Sam Allardyce has resigned from our club, West Ham United, as he thought us and the fans have been 'disrespectful and harsh' to him after all he's done for the club. This did make me and David giggle. Me and David gave him certain philosophies and he simply didn't agree and refused them.

TalkSport - Mr Allardyce has allegedly asked to release a statement this evening, How do you think he will react?

David Gold - I think I'm speaking for both of us here, we don't give a flying monkeys what that lying fat git has to say, we need to focus on the future and not the past.

Sky Sports - Fans have been asking for a former player or a club legend, do you think that is possible?

David Sullivan - It is a possibility. We have spoke to several previous players and hope to bring one in by next week as we need to strenghten the squad for this season

BBC Sport - This looks like it could be a promising season for your club. Thank you for answering our questions

David Sullivan - It's fine, we will meet again when we unveil our new manager.

The owners of the club thats in all English football news seems to have a replacement ready and should have a contract signed by the end of the week. Our reports say Paulo Di Canio or Dean Ashton.
Login to Quote 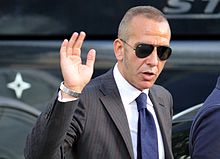 West Ham United has appointed former player Paulo Di Canio. This is Di Canio's second spell at club after getting 48 goals in 118 appearences during 1999-2003. He has replaced Sam Allardyce after 'Fat Sam' Resigned last week. The fans are excited with the prospect of a previous player taking over the managerial rains.

Di Canio started his senior football career as Lazio where he played as a youth. He then moved on loan to Ternana. Three years later he joined Juventus. He then had a short one year spell at Napoli before moving to AC Milan. A couple of years later he swithed from Italy to the British isles as he joined the Scotting club Celtic. A year went by and he was playying for Sheffield Wednesday. After that he joined West Ham where he made the most appearences than he did for any other team. He meade 118 appearences and scoring 48 for the Hammers. He then moved to Charlton for a year before moving back to Italy.

In 2011 he announced he will be taking his first managerial role and that was League 1 side Swindon, he was there for two years after making a very controversial exit. He then moved to struggling Premier League side Sunderland where he made very intense training rules. He didnt even last a year... He is hoping for a much better time in the Barclays Premier League especially with his favorite team.

Di Canio will have a decent squad for this season with players such as Check Kouyate, Mark Noble, Enner Valencia and Mohammed Diame. Diame has a reclease claus in his contract and has interest by many teams such as Paris Sait German, Sevilla, Hull and Arsenal but can Di Canio keep them off?

Fans have got what they wanted as it seems, here is Kyle Jackson on a West Ham fansite 'YES! We got a former player just what we needed, someone who cares for the club. Come on Paulo we need you!' also there was another comment from George Davis 'This sounds like a good appointment but with his controversial history? Just keep calm Paulo and you'll do fine... Hopefully'

That is it for now, But we will be back later with Di Canio's first press conference as West Ham Manager.
Login to Quote

Arriving at training and first thoughts 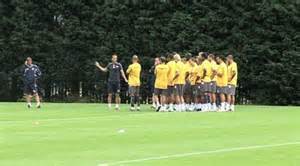 Players training when I arrived

I arrived a the training ground at Chadwell Heath and as soon as I got David Gold took me into is office and arranged a meeting, we spoke about money and where I expect the club to be after thirty eight league matches. After some convincing I managed to get David to give us £10 million transfer budget which is very handy. After out chat he brought Neil McDonald in who is my Assistant Mananager and he seemed to have some wits about him and will continue to occupy the role. He then sent me the squad list with details in like there recommended ability, age and bestrole etc. 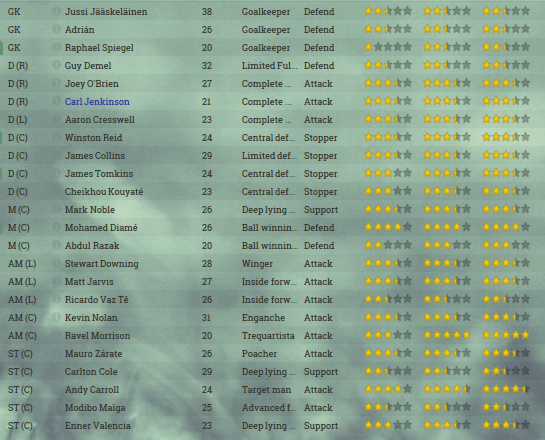 After studying it there are several players I don't need or simply do not want. Also I have begun my hunt for a goalkeeper and will hope to unveil him to the players and fans by next week. Modido Maiga and Kevin Nolan will be leaving as soon as they can as they have much better players ahead of them and don't have the quality we need especially with their wages so high. I will also will try with all my power to keep Mohammed Diame as he is a club favorite and his one of the clubs key players.

I will also be sending scouts around Scandinavia and parts of Europe for cheap quality players for the standard of the Premier League. I already have a few players in mind from the Norweigan leagues and Austrian.

The club also seems to be good financially stable for the next year as the board game a diagram the projected balance till next year. Hopefully we can keep them that way after the summer spending. Hopefully we can get some cup runs and a high position in the league.

The Key Players for us this season are

I will be rotating our squad to see our best options through the eight friendlys we play. We start with FC Midtjylland in Denmark and finish with Boreham Wood away also. We also play teams such a Olmpique Marseiie, Sporting Lisbon and AA Gent.

Five out, one in


Paulo Di Canio has only been in charge for ten days but has already came alive in the transfer market. The training ground in Chadwell Heath is obviously going to be busy this summer but could it be busier than we thought?

The first to leave was the young Portuguese attacking midfielder Ricardo Vaz Te. He has been released from the club after he taking up a big chunk of wages without being in Di Canio's plans to play at all this season. He signed in 2011 from Barnsley when West Ham was in the Championship, since then he has made 42 appearences scoring 15 goals.

The next to leave was Malian striker Modibo Maiga. He has been released also and we guess for the same reasons as Vaz Te. He is simply not good enough for 20k a week especially for the top flight. He joined in 2012 from FC Shochaux-Montbe for £5.75m, He played 17 games and scored 2 for the London club.

The third to leave was veteran Finnish goalkeeper Jussi Jaaskelainen. He was also released. West Ham United were paying 20k a week and was also not good enough. He was 2nd goalkeeper before the clubs new signing who we will unveil shortly. Jussi joined West Ham when they were in the Championship and played 38 games for thhe club.

The fourth to leave was the English attacking midfielder Kevin Nolan. Queens Park Rangers signed him for 250k He was not a starting player in the centre of midfield and all he would be doing is burning 50k per week of the wage budget. He joined West Ham when they were in the championship from Newcastle for a fee of £3m. He played 80 games for the club scoring 23 goals.

The fifth to leave Ivorian right back Guy Demel.FC Nantes signed him for £250k. He was third choice right back for the club and like the other four, he was using wages that could be spent better. He joined for a free transfer in the championship and has played 41 games for the club.

Thats all from the West Ham front at the moment stayed tune for more. Also Paulo Di Canio, Mohammed Diame and David Gold will be at a press conference very soon.
Login to Quote

David Gold - Welcome everyone, We have arranged this press conference to unveil our new manager Paulo Di Canio. We are very happy to have the former player in charge as weed someone who wants to make the club do well

Mohammed Diame - I am speaking for the whole team tonight as we are all excited to work under Paulo, We have someone who is disciplined and has more than two tactics ready unlike Mr Allardyce.

Press -Paulo are you ready to put your previous tough time in the Premiership with Sunderland behind you?

Paulo Di Canio - Of course. This is a new team and new circumstances. My aim is to have West Ham midtable or top half of the table. Firstly I need to carry on in the transfer market, I have brought in three more players since Guillermo Ochoa and I will anounce them shortly.

Press - Can you give us any information of the three players?

Press - We can't wait to see who they are!

David Gold - That is all for today as we need to finish the dealings and get ready for the league start against Arsenal.
Login to Quote


Mario Zarate scored six goals in six games and made three assists. He also have an avverage rating of 7.70.
Login to Quote

You are reading "West Ham United: Keeping The Hammers Happy".