"Well, Alan, you've probably heard through the grapevine that a couple of the lads have been taking knocks recently in training…"

"Yes, that's right. I've instructed the coaches to reduce the workload a little bit and maybe to dial down the intensity, we want to impress in this league but not at the cost of all our players." *Wry Chuckle*

"A good idea for sure, but maybe too little to late, as you know, I'm due to submit my report on the overall health of the squad but thought it best to come and talk to you myself first."

"On that, why do you use the fax machine rather than e-mail?"

"I don't hold with computers mate, you know that. Besides there is something satisfying about a hard copy, makes it more official like."

"Fair enough, so anyway, your report?"

"Well you know about Wayne, he came off after the last game complaining about his leg…"

"Turns out he's pulled his hamstring pretty bad, I reckon he'll be ok with rest but I wouldn't expect to see him back at full fitness any time before the end of next month."

"Oh great, and he'd just found his form as well!"

"Er, yes, and there was an incident in last nights under 21's match. You remember, of course, that we had to substitute the Ox in the second half after he went down funny from that attempted header?"

"Yeah, a precaution, we didn't want him to make any twinge worse."

"Too little too late I'm afraid. Turns out he's sprained his ankle, I'd put my house on it being at least five weeks before he's back again."

"Oh for crying out loud. First Kieran, then Wayne and now Alex…"

"PHIL?! What the hell's wrong with Phil?"

"Don't shoot the messenger Alan but he twisted his ankle in training just now which is why I thought I'd come tell you in person."

"It's early days yet but I'd reckon three weeks at best… sorry."

"It's ok David, thanks for letting me know, I guess I've got some plans to change for the coming weeks then." *Ironic Chuckle* "This just keeps getting better doesn't it."

"Tell me about it, we'll need to hire more staff at this rate!"

"Staff? We'll need some bloody players first! Do me a favour, can you get the kit man to check the studs on the guys boots? Every time I had lower leg injuries it was because of the wrong studs, it's a long shot I know but we've got to stop all these sodding injuries and soon!!"

"Consider it done, I'd best be getting back to the treatment room." Did you just create your own newspaper headline? I'm in awe, bravo. Encore.
1
Login to Quote

Ziechael
6 years
The 510 Series/Icarus - Thanks guys

I'm hoping my graphics are the key to making this story stand out more. That one required finding the back page of a newspaper from the right time period and a clever bit of editing

Capital One Cup - Fourth Round


Hi, and welcome to Wembley. You join us here today for the Capital One Cup fourth round match between England FC and Tottenham Hotspur. So far the turn out for England's Wembley matches has been less than impressive and with only a quarter of the stadium full today it's looking like the FA's plans to utilise the national stadium for all England FC's cup games was ill advised. However, a good win against Man City last time out has increased Alan Shearer's managerial credentials and surely success today can only peak the interests of more and more of the neutrals out there looking for a club to follow.

England have opted for a standard 442 today and have given first place starts to Adam La Fondre up front alongside Daniel Sturridge, Jordan Rush and young up and comer starts on the left of midfield with Lampard and Gerrard holding the middle of the park and Henderson out on the right. Luke Shaw, Stephen Caulker, Chris Smalling and Kyle Walker form the back four in front of Jack Butland between the sticks. An interesting mix of young and old, match fit and untested players, the next ninety minutes will be sure to separate the men from the boys.

Spurs have adopted a 451 for today with Soldado alone upfront. He has Sigurdsson, Holtby and Lamela close behind him for support and they, in turn, are backed up by Dembélé and Sandro. With Rose, Vertonghen, Dawson and Naughton under the watchful eye of Hugo Lloris one thing is certain, this will be a tough side to break down.

After overcoming the mighty Manchester City could this be a step to far for the newly formed England FC side?

With a place in the Quarter-Finals beckoning I think we can expect to see some great football out there today.

After absorbing a bit of early pressure from the 'home' side, Spurs hit back with an amazing counter. A great ball forward from a Sigurdsson clearance fell nicely to Soldado who wasted no time in covering the majority of the pitch with a mazy run. Walker managed to get a leg in to stop him before he could reach the box but a well timed slide immediately after by an ever present Sigurdsson put Soldado back in action. Pushing into the box he slid the ball through for Holtby who rifled it into the top right hand corner past a desperately reaching Butland. Jack never really had a chance to stop that one! 1-0 Spurs. It only took England FC five minutes to reply, a poor Spurs corner allows Jordan Henderson to run free and supply Daniel Sturridge with the ball midway into the opponents half. There is still a lot to do and Sturridge rounds three defenders before cutting back and slotting the ball past the out of position Lloris. 1-1. 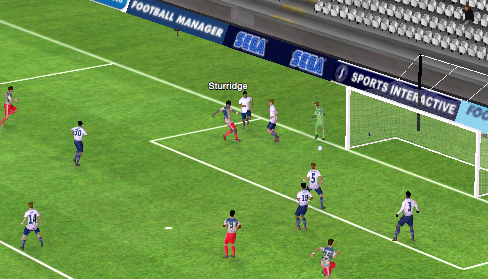 The rest of the half passed without much event. Both teams seem cagey, unwilling to allow their opponents an advantage in this close affair.

It doesn't take Spurs long to stake a claim in the second half. A beautiful period of passing play results in a looping cross from Naughton. Sigurdsson leaps high into the air at the back post and lobs Butland with a superbly cushioned header to the far side of the goal. 2-1 Spurs. Spurs are really starting to dominate this match now. Whatever was said at half time has had an immediate effect. Lamela, put through and running free could only drill the ball into Butland's chest at the end. Continuing their domination Spurs capitalised on a free kick just outside the England FC box. A sweetly struck strike by man of the moment Gylfi Sigurdsson could only be parried into the back of the net by Butland. 3-1 Spurs. The England defence is in tatters now, a poor goal kick allows Tottenham to come straight back at the dazed looking back four. Glyfi, on the form shown today, couldn't miss from 12 yards out and powers the ball into the back of the net. 4-1 Spurs, the rout is on.

Nothing is going right for England in this second half. Alan Shearer stands on the side lines scratching his head while the players look to him for any kind of guidance on how to stop this rampage. Lampard gives the ball away in the Spurs half and within two passes Lamela is cutting inside to pass the ball past Butland. 5-1 Spurs and the England FC fans are already starting to leave the stadium. A rare period of cohesive play by the England FC midfield lead to a conciliatory goal for Sturridge, rising up to nod the ball over the advancing Spurs keeper. Way too little and way to late. 5-2 Spurs. It could have been worse some will say. Defoe was allowed to turn near the edge of the box and rattle off a shot with more power than aim. Fortunately for Butland the ball sailed past the outside of the post and not into the back of the net, Jack has been back there all too often today.

And that was that. England FC dumped out of the Capital One cup by Spurs. While most pegged the match as a close one it was certainly unexpected that the gulf would be so large by the final whistle. A thoroughly deserved win for Tottenham sees them safely into the quarters while Alan Shearer and his boys will have to head back north licking their wounds and wondering how they got it so wrong! Ziechael
6 years
MrJK - I aim to please... and it's nice to see you back commenting on stories instead of bashing yours out

Ziechael
6 years
As much as i was enjoying this save FM15 has come at a good time. This one has reached the january window for me and has become unplayable as FM isn't built to handle central contracts meaning that most of my short term contracted players are wanting to leave... and i can't stop them!

So it is with a heavy heart but a clear conscience that i abandon this tale so early on, i fully believe that this experiment could have worked and worked well though.

Check out my new FM15 story:
http://www.fmscout.com/q-13533-A-Flawed-Genius.html?n=last#bottom
Login to Quote