Hey everybody. For my first FM15 story, I wanted a club in the top tier and a club that has a good youth system, so I went with West Ham United. A club which is even called The Academy of Football, so we’re good on the “good youth system” part. Also, West Ham’s starting team is one that really appeals to me, with players such as Diafra Sakho and Enner Valencia. Well, let’s kick off the story:

West Ham give Big Sam the Benefit of the Doubt LONDON – After much debate between West Ham’s board members, the club has decided to give manager Sam Allardyce one last chance. Last season The Hammers finished in a reasonably good 13th position, but they were relegation zone for a big part of the season. This led to many fans wanting the 60-year-old out, but the board held confidence, claiming that firing the manager would lead to more consternation around the club.

Their decision to let Allardyce finish the season worked out for the better, and Allardyce kept The Hammers up. Despite keeping the club up, long talks were held over the future of the former Bolton manager, because certain board members didn’t believe he was the right man to take the club forward, mostly down to his style of football: he mainly employed a long-ball system, with almost no ground passes. But, the majority eventually decided to vote in favour of Allardyce, meaning he will get at least one more season to prove himself.

Allardyce was presented at Boleyn Ground at the start of the 2011/2012 season, after getting the sack at Blackburn in 2010. West Ham had just got relegated to the Championship, and it was Allardyce’s task to take them straight back to the top tier. He succeeded, but his style of football was questioned by fans, who said that the team played unattractive football. In the next two years, Allardyce kept the club up, but again there were “Big Sam Out” banners, mostly because of bad results and an ancient style of football. After a 0-0 draw at Stamford Bridge, Chelsea manager Mourinho said that West Ham plays “19th-century football”. Still, Allardyce kept his job, and even won four consecutive games after the draw against Chelsea, getting him the April Manager of the Month award. Due to this good spell in April, the club finished on a high: 13th.

The manager claimed that he had high hopes for the new season: “I can assure you we’re going to make some great signings, and we won’t let go of many big names. With our new attacking manager Teddy Sheringham, there will be a lot more goals and better football, I can assure you that. I’m looking forward to training this team again and preparing for the new season.” With these words Allardyce has set the standard high for himself, as the fans will now really be expecting something else than the kick-and-rush football from the last two seasons.
Login to Quote

Joe
8 years
Nice start mate, I;m sure this will be good!
Login to Quote

marry me.
Login to Quote

Tallery
8 years
Good luck mate, I will be there to support you in such a difficult job

PS. Marry me, not him
Login to Quote

Zed
8 years
We can also move to a country where polygamy is allowed and I can marry you both!
Ps: there'll be a graphic in the next update

Jack
8 years
I like this start and I want more, give me more
Login to Quote

Justice
8 years
I know this will be a hit, good luck!

I will be up for that, and yay a Zed graphic!
Login to Quote

Allardyce keeps his word and brings in three attackers 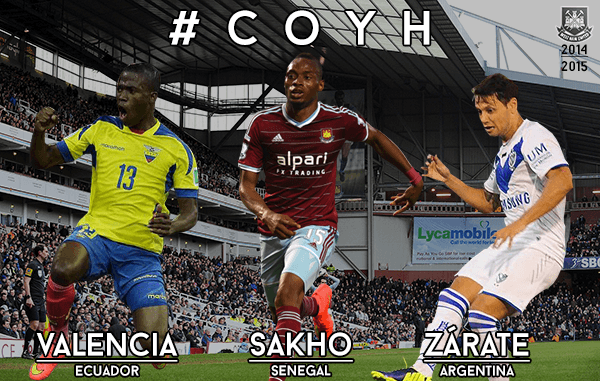 Enner Valencia – Pachuca
The biggest signing of these three is the one of Ecuadorian striker Enner Valencia. Before the World Cup, almost nobody heard of this 24-year-old striker, but after making a great impression in Brazil, many clubs suddenly went after him, and Valencia eventually chose West Ham as his first destination in Europe. The Hammers were prepared to pay the hefty asking price by Mexican side Pachuca: fifteen million. His value obviously rose because of the World Cup, but also due to the good form he enjoyed before the World Cup: he scored 23 goals in 27 games for Pachuca. Valencia began his professional career at Ecuadorian top flight team Emelec, where he scored a mere 23 goals in 117 games.

Upon his arrival at Boleyn Ground, there were many fans outside the stadium, and Valencia appeared to be really enjoying his first days in Europe: “I’m over the moon to join this great club, and it’s always been my dream to play in such a big league. I’m thankful to West Ham, but mostly to the people back in South America: the Ecuador manager, and of course the managers at all my former clubs.” Sam Allardyce also was very pleased with his big signing, and he remarked: “I promised attacking players, and there are many more to be presented!”

Diafra Sakho – FC Metz
And indeed, as Big Sam said, more attackers joined the London outfit: next in line was Ligue 2 starlet Diafra Sakho, who scored an impressive 20 goals in 27 games, after not being renowned for his goalscoring abilties in the seasons before. So, Allardyce is taking a risk with him, because who knows: last season might have been an exception for an otherwise low-scoring striker. The Senegalese striker cost West Ham five million, bringing the club total to twenty million for only two players. But, as the saying goes: risks are there for the taking, and Sakho could take the Premier League by storm.

Sakho was presented a couple of days after Valencia, and almost as many fans turned up for his first day at the club. The striker’s first words in front of the English press were the usual words: “I’m happy to join this club, and I believe that we can surprise a few this year, as the manager has put together a decent squad. I’m positive that I will add something to the squad, and I’ll try my best to score many goals for the club. COYH!”

Mauro Zárate – Vélez Sarsfield
The last of three attackers joining West Ham was Mauro Zárate. Once dubbed a very big talent, the now 27-year-old ultimately made the wrong choices in his career, for example his choice to join Qatar outfit Al-Sadd, a move that appears to be more about the money than the actual club. Al-Sadd decided to loan out their star player to Birmingham City, then managed by current West Ham manager Allardyce, and after a fairly good spell at Birmingham, Al-Sadd loaned him about again, to Lazio. The Italian outfit eventually decided to buy him for around 20 million pounds, but eventually ended up letting him go back to the club where he made his professional debut: Vélez Sarsfield.

Allardyce was very happy with his three new attackers: “I’m very glad we’ve been able to get in three attackers, I really hope the fans are happy about our attacking line now, and I think that we’ll see lots more goals this season from, hopefully, all three of these players. I can promise you, there will also be signings for our midfield and defense, but currently, this is all that I can reveal.”

Joe
8 years
Nice three signings! Will do well I'm sure!

A nice 'Zed' graphic as well!
Login to Quote