Aaron
5 years
Great start man! What better way to end the festive season by entering the play off spots. Well...Maybe entering the automatic promotion spots but none of that matters right now because you've started brilliantly! Well done

2014-10-28 15:47#197576 AaronHJFT96 : Great start man! What better way to end the festive season by entering the play off spots. Well...Maybe entering the automatic promotion spots but none of that matters right now because you've started brilliantly! Well done

It has been a very positive start and it definitely puts us within a chance of getting promotion! Automatic promotion may be one step too far but you never know. Long may the positive results continue.
Login to Quote

Every single game this month went as expected apart from one, which was the 3-3 draw with Bristol Rovers. A new feature appears to be the offer of extra time in the FA Trophy, which is not something I have heard of being done before. Then again, I have never followed the FA Trophy so it could be the done thing nowadays. I decided to accept the offer of extra time the first time around and it seemed to be a good job too as four goals were scored, two by each team, in extra time. It was a great game to watch with both teams really going for the vital winning goal, but to no avail. Surprisingly we were made favourites for the replay after our impressive performance in the first tie. However, we didn’t turn up to the game but instead lost out to a twenty-third minute own goal by our right back Zak Mills who just got his feet all tangled up. It was a shame as a cup run would have given some of the unused players a good run out but the positive is that we get to focus on the league, which has continued to go very well.

The game against Harrogate was disappointing but the standout performance has to be the one against Guiseley which saw the Boston United legend that is Marc Newsham score his first hat trick of the season. He is just unstoppable and is putting in some outstanding performances despite not having the best attributes, which annoyingly are not increasing as games go on. I have managed to convince the board to put some more money into the wage budget which has allowed me to encourage Newsham to sign a new contract. It is unfortunately only for one more year but the extra wage incentive should persuade him to stick around for the long term and sign another deal in the future. Newsham is really going to be the difference whether we manage to maintain this play-off potential or whether we have a dip in form towards the latter stages of the season.


Player of the Month – Marc Newsham

The story is actually behind the save. I am already into my second season

Ipswich Knights
5 years
wow man how do u play just commentary or do u watch the matches? cause thats quick haha
Login to Quote

Jamesg237
5 years
Ipswich Knights:I have been using the 3D match engine. Although as I am now looking into streaming my matches, I will be using the 2D classic mode with 3D replays of the goals. I have just played quite a few hours already, and remember, I started a fair few games into the season as I didn't have a job ingame.

Josh_MU:That'll teach them for not giving me more time on FM14!
Login to Quote

They are a definite possibility which I think is a good return for my first season!
Login to Quote

pompeyblue
5 years
You're doing a good job here James, keep it up and a play-off position is in sight!

Thanks very much. I am confident the lads can keep up the good run of form and make sure we get at least a play-off spot.

Thanks very much. I hope we achieve promotion as I will see it as a big success in my first season with Boston United.
Login to Quote

This month, apart from the Colwyn Bay and Guiseley games, was always going to be our toughest test so far this season. Hyde, Bradford PA and Harrogate have all been performing well this season with them all battling against each other and us for the automatic promotion and play-off spots. It was going to be the month where we had the opportunity to show what we are made of as a club and that we are in this battle for the long term. The game against Hyde was as poor as the score; it was a drab match from start to finish with neither team looking like they want to push forward for the win.

The game against Colwyn Bay was seen as a good opportunity to rest a few of the first team players, which worked in our favour. The refreshed players came in and put in a good stint resulting in six different players getting on the score sheet. The only nervy moment was when Marc Newsham had to be replaced due to injury; thankfully it was just a bit of a knock and the substitution became precautionary as he didn’t miss any games for the rest of the month. The game against Bradford PA was a frustrating one as we played against a Bradford team that played with ten men for the last 40 minutes of the game but we failed to capitalise. Our right back Zak Mills then got himself sent off which all but ended our chance of pushing forward to grab a winner. A very disappointing result. 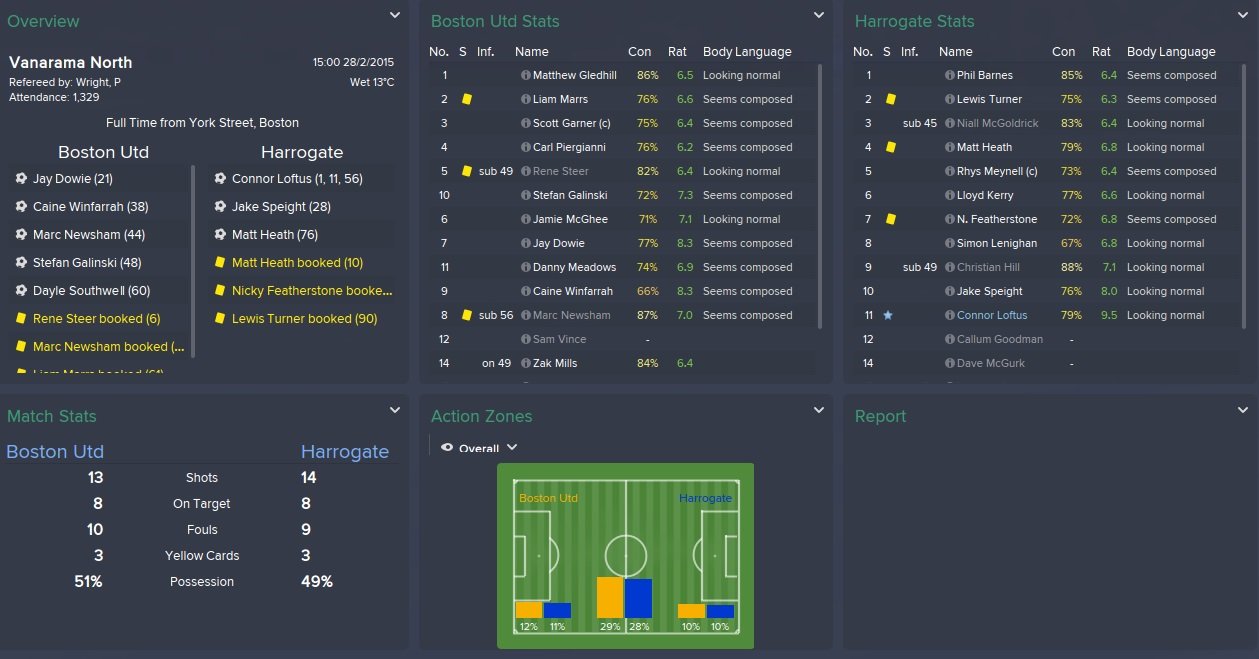 Amazingly, the 5-5 draw against Harrogate was the fairest result as both sides performed admirably on the attack but atrociously when defending. Both sets of defenders were shocking and our defence was undone by the brilliance of Connor Loftus who has been Harrogate’s main threat and has scored 23 goals in 32 games in all competitions. I have to admit that I didn’t respond to the threat he posed but instead just focused on getting ourselves back into the game. Newsham was a big letdown that game when he should have been copying Loftus’ performance but instead was substituted part way through the second half. The replacement strikers are simply not good enough. I have signed two (Lewis Chambers and Jordan McLeod) to add some depth but they are appalling. This results in pressure being on Newsham’s shoulders and we simply don’t do well when he doesn’t play up to his normal high standards. The midfield and attacking areas will need to be improved in terms of quality instead of depth as we already have that. I will be looking to Chambers and McLeod to step up to the mark, especially if Newsham suffers an injury.


Player of the Month – Stefan Galinski

Neal
5 years
What a goal friendly month after that first drab match! Still doing quite well in the league, though, promotion looking a certainty