Neal
7 years
Bit of an up and down month, but you're doing quite well in the table!

Jamesg237
7 years
pompeyblue:I do hope the results get better. It has been inconsistent so far but we do have the quality to change our fortunes.

Justice:Really? I think it has been ok; maybe I am expecting too much?

Neal:I think up and down is the best way of describing it. We will need to get onto some sort of winning streak if we are going to maintain our league position.
Login to Quote 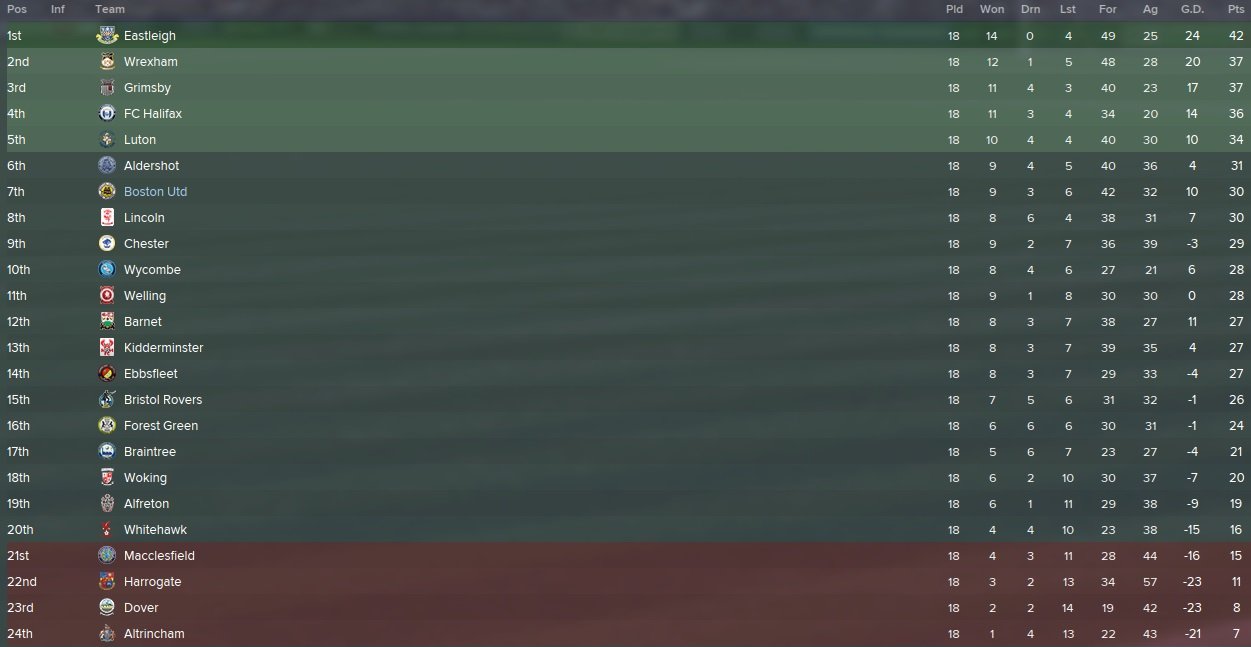 Unfortunately for you the reader, there is very little to say about this month as it all went according to plan apart from the disastrous performance against Welling United, which I would prefer to forget about rather than discuss. 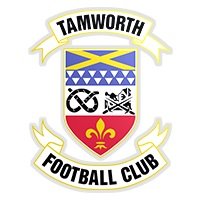 On a personal level I have been invited to be interviewed for the job at Tamworth. Tamworth currently sit 15th in the Vanarama Conference North after a poor start to the season. They have played fifteen games and only won four, while drawing five and losing six. Tamworth are only four points above the team at the top of the relegation zone, Hednesford Town. As a club, they have won a similar number of competitions compared to my current club Boston United but unfortunately for them, they were relegated from the division I currently play in last season.

I have to admit that I was quite flattered that they felt I might be the person to get them into the a stronger position in the league and potentially help them like I have Boston United and get them back into the Vanarama Conference. Unfortunately I am rather enjoying my stint with The Pilgrims and at the moment, I have the intention to stay with the club for the long term; especially as the play-offs look a possibility at present. I have therefore rejected the offer of an interview, which I had hoped would get me back on the good side of the board after I requested yet more funds to sign extra staff, which was declined. I had flirted with the decision whether to leak this to the press but I could only see that ending in disaster.

What this interview offer has done as made me do something I rarely do, which is to look towards the future. I am still much undecided as to whether I want to stay at Boston United long term or seek employment elsewhere. I do think this decision can’t be made until the end of the season and we find out if I have achieved the expectations set of me. Just as a reminder, the expectations are to battle against relegation which we are well and truly doing. Once the season is over I will evaluate any options available to me, wait and see if Boston offer me a new contract which is more than a year and make the decision which will keep this save interesting to me and possibly add some drama for you the reader to enjoy.


Player of the Month – Dayle Southwell

Neal
7 years
Excellent month! I agree with your decision to stay with Boston, at least until the end of the year. Personally I wouldn't accept a job offer unless it was a pretty reasonable upgrade, which Tamworth were not.
Login to Quote

2014-11-07 00:11#198585 Neal : Excellent month! I agree with your decision to stay with Boston, at least until the end of the year. Personally I wouldn't accept a job offer unless it was a pretty reasonable upgrade, which Tamworth were not.

I think it was our best month so far and showed that we can compete at this level! I can see myself at the club for another season or two. I want to try and get the club into a sustainable position where they can at least stay at Conference level and not be dragged back down.
Login to Quote

I have faith in you Boston!
Login to Quote

I have faith in you Boston!

We are indeed very close to our end goal but it is still going to be very difficult as we have to come up against some good teams towards the end of the season. There is still a lot of hard work ahead!
Login to Quote 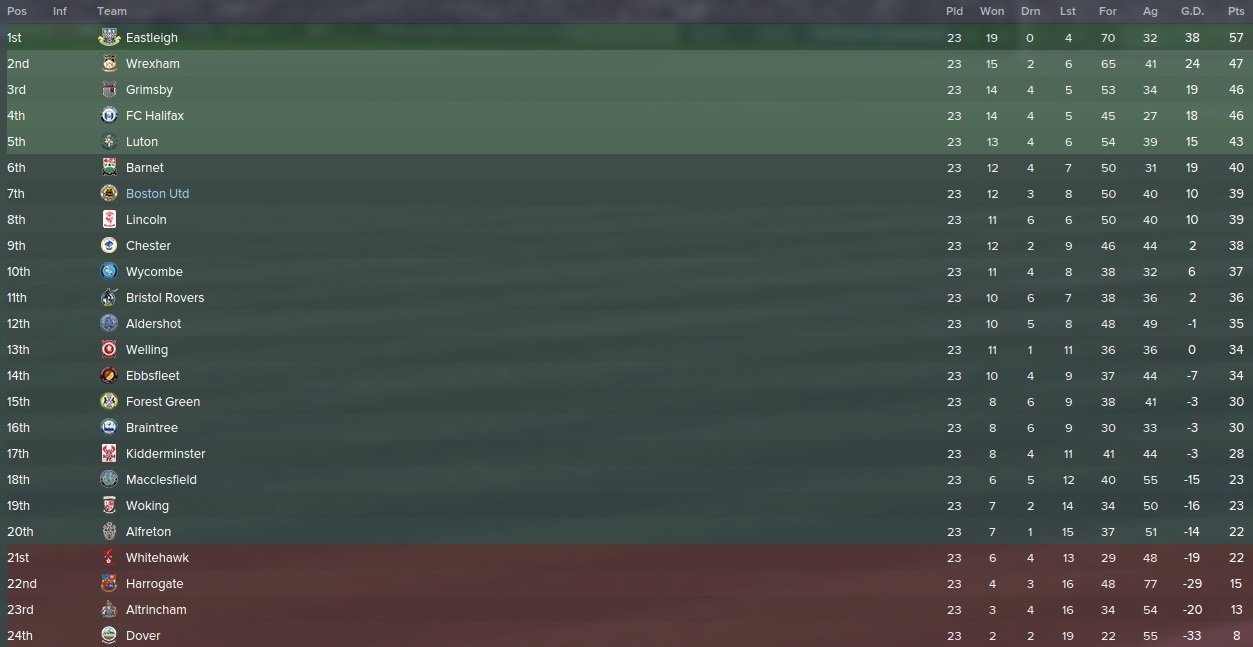 The game against Luton Town went as expected. It was always going to be a tough trip to Kenilworth Road as they have done really so far this season and currently occupy the final play-off spot that I have set my eye on. We didn’t turn up and just didn’t perform to the standard that I know we are capable of. Luton fully deserved the win and seemed to be staking a claim on the play-off spot and sent a message to us chasers that they wouldn’t be giving it up.

The game against Whitby Town had the potential to be a match that could have gone against us. Admittedly I underestimated them and they put up a good battle against us; that was until Matthew Waters got sent off in the twelfth minute meaning that my side could run out comfortable victors. The next round pits us against Leamington Spa who if you remember, we hammered them on the final day of last season. However, if the road ended against them I wouldn’t mind too much seen as I am not a big fan of domestic cup competitions. If I had the choice between the final play-off spot and the potential of a big team coming to our ground in the third round then I would choose the play-off spot hands down. Our sole focus needs to be the league and creating a sustainable club that can perform comfortably in this league for a couple more seasons.

The rest of the month went according to plan with Dayle Southwell putting in some great performances and taking his goal tally higher and higher. My preferred formation at the moment is 4-1-4-1 which means Southwell is playing as the lone striker, meaning that there is a lot of pressure on him to perform and grab us some goals. Caine Winfarrah and Kaine Felix, who has now stopped moaning about lack of game time, have put in some good performances and been a part of most of our goals this month. All in all, the outlook is looking very positive for Boston United with us beating the sides that we should be beating and putting up a good fight against the stronger teams who are fighting for the automatic promotion spots.


Player of the Month – Matthew Gledhill

MichaelBBack
7 years
Congratulations on your success so far, to be so high in the table at that stage of the season is fantastic, and if things continue then you really could be looking at a play-off spot and who knows, maybe a second promotion in as many seasons!

I'm glad you didn't consider the Tamworth job. You seem to be building something at Boston, and appear to have got to grips with the players very well, it'd be a shame to move on from all that so soon, as I feel the club clearly has potential with you at the helm (as we can see from looking at the table).

Just wanted to say, as well, that I've really enjoyed reading your story so far, keep up the great work. Come on you Pilgrims!
Login to Quote

2014-11-07 17:02#198658 MichaelBBack : Congratulations on your success so far, to be so high in the table at that stage of the season is fantastic, and if things continue then you really could be looking at a play-off spot and who knows, maybe a second promotion in as many seasons!

I'm glad you didn't consider the Tamworth job. You seem to be building something at Boston, and appear to have got to grips with the players very well, it'd be a shame to move on from all that so soon, as I feel the club clearly has potential with you at the helm (as we can see from looking at the table).

Just wanted to say, as well, that I've really enjoyed reading your story so far, keep up the great work. Come on you Pilgrims!

I do hope that promotion will come our way in the next season but it is going to be very difficult. The Tamworth job wasn't worth taking as they are in a worse position than I am with Boston United.

I'm glad you're enjoying the story and thanks for the kind words!
Login to Quote

We are within touching distance but there is still a long way to go. Congrats on posting the 100th reply on the story. My stories tend to get more views than comments so I am made up that it has already hit a hundred and I am only into my second season. Thanks everyone.
Login to Quote

December: What to do next? 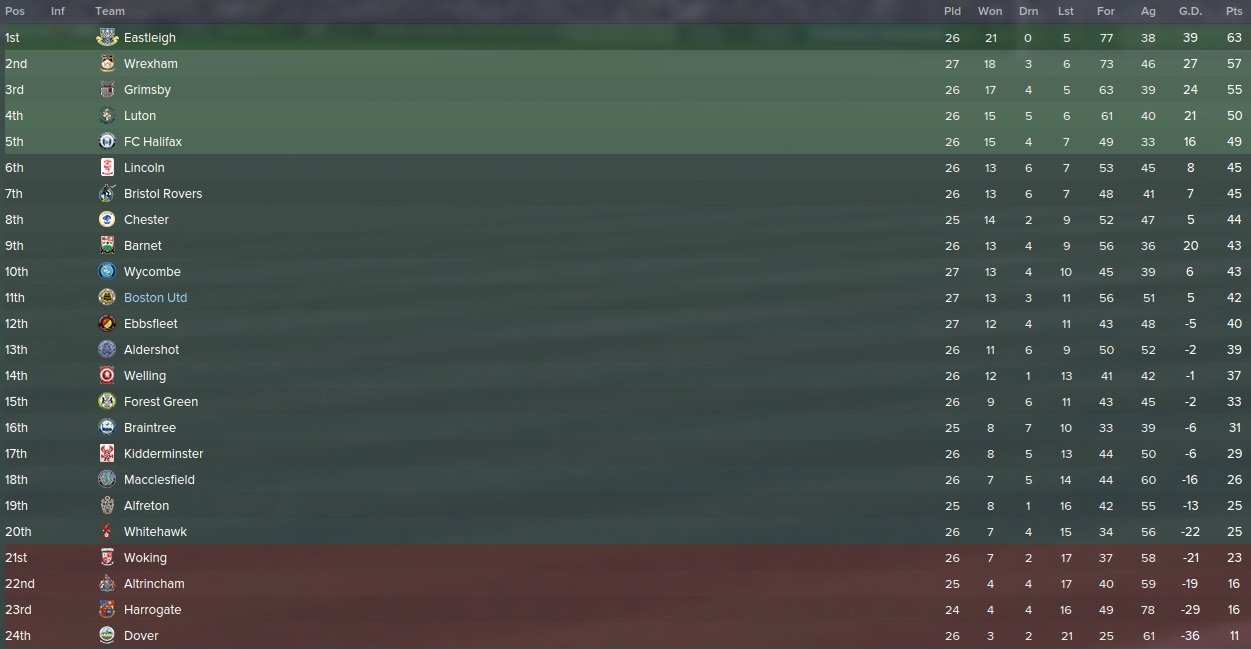 A huge part of me didn’t actually want to write this update; just erase it from memory and come up with some cock and bull explanation for you all as to why I happened to miss out the November update. However, I have decided to be the bigger man and not let the disappointment take over me. I rarely get so involved in a game that my emotions start to change; if things don’t go my way I tend to brush them off and remember that it is just a game and to get over it. Is it just a game? It certainly didn’t feel like a game as I sat there watching my side get hammered for the majority of the month; even against Leamington Spa who you may remember my side destroying on the final day of last season. I actually found myself getting extremely wound up that every decision went against us, that my defenders didn’t turn up to the games and that Dayle Southwell and Marc Newsham did a better job of nearly putting the ball in our goal instead of the oppositions.

No matter what I did to improve the situation, the players seemed to throw it back in my face and I do fear that I am starting to lose the dressing room. This could possibly be as a result of my high expectations, when haven’t met has meant the players have had a rollicking. This has severely damaged the morale of the players and now me, looking like a fool, has to try and pick them up for the next couple of games which we are more than capable of winning. Although, I did think we could beat Leamington Spa!

Despite results really not going our way this month, we are still over achieving in terms of league position and some of our performances so far this season. The board of directors are still seeing me as “untouchable” in regards to my job security but this could very quickly change for the worse if results don’t pick up. The next two games, against Altrincham and Kidderminister Harries respectively, will give a clear indication as to whether we are going to slip any further down the league table. I am still confident of meeting expectations but this is football and anything could happen.
Login to Quote

Walter
7 years
Ouch, that is a tough month. You shouldn't set such high expectations as you're already exceeding them imo

hopefully you can turn it around, I'm sure you will.
Login to Quote

hopefully you can turn it around, I'm sure you will.

It was an awful month and I just couldn't wait for it to be cover. The expectations I think need to be high but then the small positives need to be focused on more!
Login to Quote