Neal
5 years
Well, I honestly think you ought to be able to get him permanently if you get promoted, but another loan is definitely a clear option. Excellent work on your MOTM award, and wow, those wins are just incredible! Keep up the winning

Verdinho
5 years
Top notch month, James! A future deal for Aarons should happen for you. He'll be 22 next season and his stats don't suggest a team like Newcastle will start him many times, which is good news, because he's clearly been a great addition to your side. Congrats on winning Manager of the Month too

Jamesg237
5 years
Denzy:I am hoping it doesn't too as he would be such a good signing for us and a great player for the future.

Neal:Thanks for the congrats on the award; it was deserved! Haha. Aarons on a permanent deal will be a priority at the end of the season no matter how it finishes.

pompeyblue:He is unstoppable but we cannot solely rely on him. Hopefully others will contribute some goals and assists.

P-KIDDY:Thank you. He won't get into a Premiership side for a few more seasons but hopefully we can help him develop and he will choose to stick around on a permanent deal.
Login to Quote

MisterLister
5 years
Keep it up mate you have a great chance to win a league or a double title who knows...

I do hope we have a positive end to the season. I will get an update posted shortly to get everyone up to speed!
Login to Quote 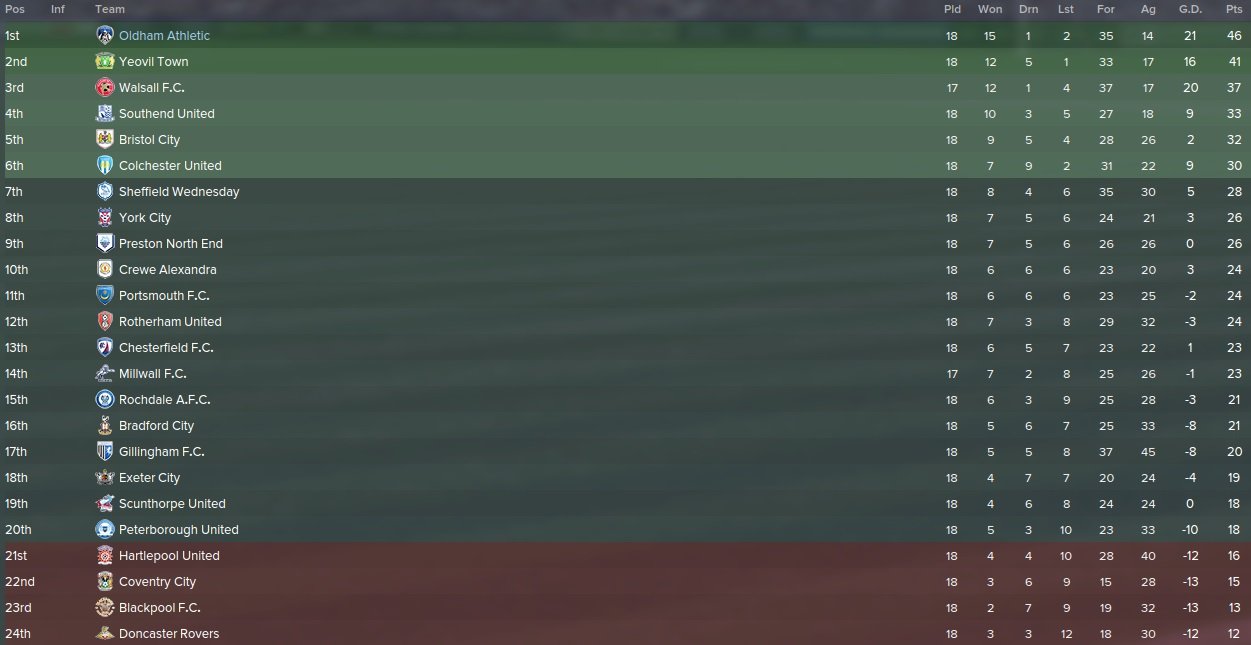 The most pleasing aspect of this month’ results are the fact we have managed to score more than two goals in a game. Recently we haven’t been as prolific in front of goal as I would have liked us to be, which is a shame seen as we have a lot of good striking options. Rolando Aarons has been scoring goals and with Dominic Poleon, David Goodwillie and Jerome Sinclair back from injury it isn’t like we aren’t lacking of players who can put the ball in the back of the net. However, this month appears to have been a bit different with us managing to score eight goals within two games. Yes the five goals against Bristol Rovers are against a lower league team but it is still an accomplishment. Goodwillie managed to get on the score sheet as did Poleon, Brooks (with two goals) and Mills/ The great thing about this match was that Jerome Sinclair was able to be rested whereas Aarons was able to be brought on for a brief run out towards the end of the game. Annoyingly I forgot to swap my keepers around so Daniel Ward sat out a game that he could have performed comfortably in. I did however pay him back for my mistake by putting him in goal against Crewe.

We had lost earlier in the season to Crewe so we were seeking a bit of revenge, especially as a win would see us progress into the semi final of the Johnstone’s Paint Trophy; which in an earlier update, I shared my determination to win. With the game being of importance to us as a club I played a strong side with Rolando Aarons, Dominic Poleon, Jerome Sinclair and Reuben Noble-Lazarus all starting. I do prefer to give players who have not featured much in the league a run out in domestic cup games but this game was too important for us to slip up. We won the game comfortably with us progressing to a difficult semi final tie against Bradford City next month.

There was an extra incentive for the lads this month which was to break out first record. We have now broken the record for the longest unbeaten run with it now stretching to fifteen games in all competitions. The secret behind this? There isn’t one really but there is little rotation with only a couple of players being swapped each game, players are being praised for their performances and the same two formations are being used. I certainly won’t be changing this approach as it is working a treat at the minute. Why fix something that definitely isn’t broken?


Player of the Month – Dominic Poleon

Neal
5 years
Really solid month, excellent to see everyone getting in on the goals. Between Poleon, Sinclair, Goodwillie, Aarons, and Noble-Lazarus, you've got a helluva good attack!
Login to Quote

It is definitely a strike force to be reckoned with in this league. Lets' hope that the defence stays strong if these lads are going to put the effort in to get the goals.

Thank you. Long may it continue.
Login to Quote

MisterLister
5 years
Jamesg237 when will be next update? Can't wait to see how things went in next month XD
Login to Quote I have to say, on reflection, we have delivered our fans a good number of performances in the Christmas period to make sure they went into the New Year confident that their club would gain promotion come the end of the season. The month got off to a very good start with us carrying on our good run of form in the league with a win against Scunthorpe United. This was followed by progressing to the coveted third round of the FA Cup after a below par performance against Northampton Town. We were solid defensively but we didn’t show the difference in quality at the other end of the pitch. However, we did make up for this by putting in a much improved performance against Bradford City in the Johnstone’s Paint Trophy. This is the domestic cup competition which I have set my eyes on winning. The final has pitted us against a difficult Barnsley side with it being played over two legs. I am quietly confident of our chances despite the first leg being away.

The next game is one that I wish to forget. Yeovil Town showed why they are vying for the play-off spots and it gave an indication that they certainly haven’t given up the fight for the automatic spots that us and Walsall have occupied for a while now. The other loss didn’t do Bristol City’s chances of a play-off spot any harm with a very impressive two nil win against us. Both Yeovil and Bristol were deserving of their wins and it was an important six point’s loss. Simply beating the clubs around us will give the lads a boost of confidence that we can perform against the clubs in and around us in the league and come away with all three points on offer.

What I worry about when looking to the future, which could involve a promotion, is that the likes of Duane Holmes, despite him having an amazing first season with us, won’t be up to the standard to play in the Championship. I am confident that if with us having Championship status we will be able to look to the loan market and get in quality players; however, that really isn’t fair on the players who have got us there. With the poor training facilities on offer, the players’ attributes are only increasing by playing in games. This means the majority of the players’ attributes aren’t going up like I would have hoped, surely resulting in them not being good enough for the next step up. However, one thing we do have is team spirit and that can go a long way to gaining success against the odds.


Player of the Month – Duane Holmes

No1VillaFan
5 years
Awesome updates as usual, your top and staying ther eI think, for me this is still the best story on the site
Login to Quote

RD17
5 years
hope the 3rd round draw works out in your favour!
Login to Quote

Neal
5 years
That 4-1 reverse against Yeovil and being shut out by Bristol are the obvious shocks, but the wins are still flowing nicely.
Login to Quote