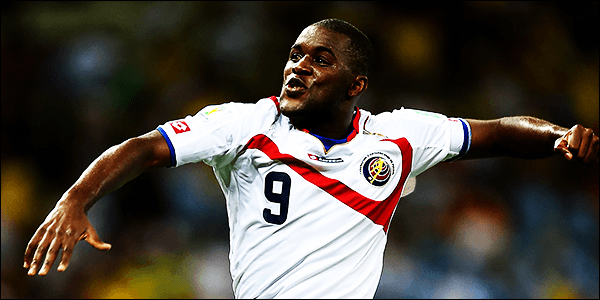 After A.C. Milan's impressive start to the season, Il Rossoneri wants to show that they are not going to stop here.

After our 4-1 win against Juventus, A.C. Milan has always won their games by only one goal margin. It happened against Udinese, Sassuolo and Empoli, but then it stopped. For the first time this season A.C. Milan haven't won - and drew 1-1 with Cesena.
Milan's manager Or Dabool has changed his formation to a wide 4-2-3-1 instead of the narrow 4-3-1-2. That worked wonderful and in the next 2 games Milan has won 7-2 and 6-1.
In those 2 matches the most efficient player was Joel Campbell. The Costa-Rican has finally scored and netted a hat-trick in the 7-2 win alongside an assist. In the 6-1 he scored once, but managed to assist twice. 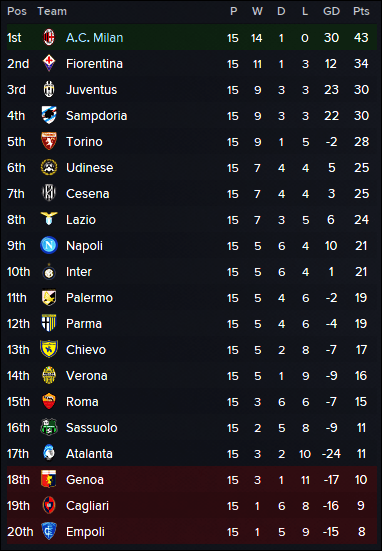 It is now January and A.C. Milan will try to keep up the good performances in 2015. The Italian club has also announced the signing of LOSC Lille's right-back Sébastien Corchia for £10.5 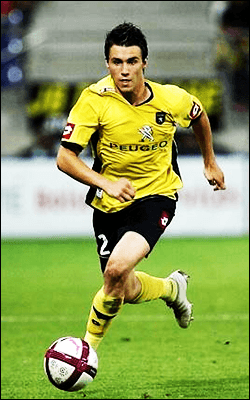 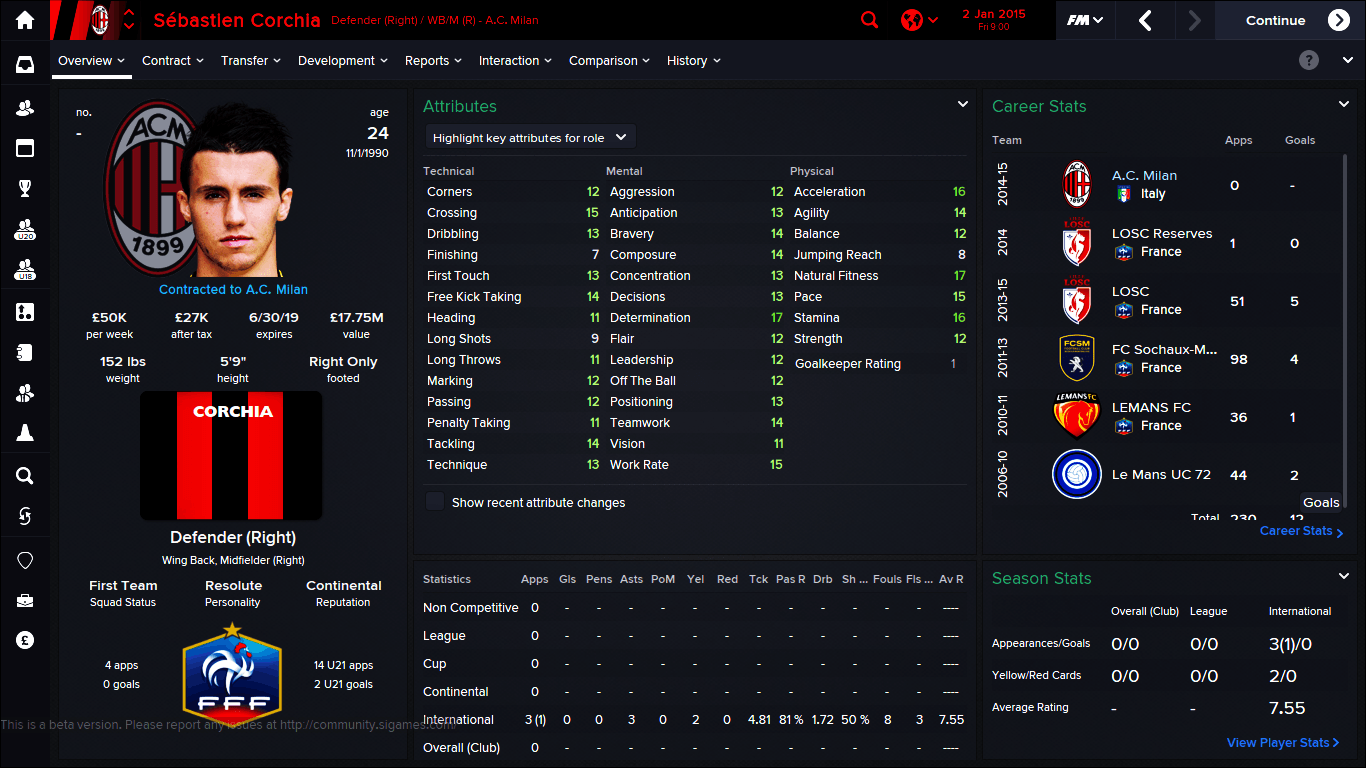 Jamesg237
5 years
What a thumping result against Chievo! Storming the league and that point lead will do you some favours incase of a drop in form. Keep it up!
Login to Quote

TonkaWolves115
5 years
Great results mate, your destroying the Serie A at the minute, title favourites already!
Login to Quote

Icarus
5 years
You're on your way to win your first scudetto, no way Juve or Fiore will catch up now.
Login to Quote

Zed
5 years
Wow, what a start! Great couple of transfers as well, Corchia has turned out to be a good right0back for me a couple of times already!
Login to Quote


A.C. Milan is in terrific form so far at the Serie A so far this season, leading from the 1st position. But as always, not everything can go up to the plan.
Speaking to the media, Milan's Spanish goalkeeper Diego Lopez has confirmed that he wants out of the Italian club. When asked he said that he loves the club, but he is just struggling to play away from Spain.

A.C. Milan's manager Or Dabool has already ended the speculations: "As things are, Lopez is still a Milan player. The club has offered him a leave of absence to travel back to Spain and try to keep himself together. We want the best for him, as well as for the club. If after the time in Spain he will understand that Milan is not his home, we will release him."

These news will probably hurt a lot of Milan's supporters. So far this season Lopez has been one of the most important players on the pitch, stopping some must-score situations. The man that will move back to the first team will be Christian Abbiati, but the difference in abilities is clear to everyone. How will this effect Milan's rest of the season?


http://oi62.tinypic.com/2u8xtv5.jpg
Abbiati. Will he manage to replace Diego Lopez?

Justice
5 years
Superb form in the league and a fantastic signing in Corchia! It's a shame López wants out, but you will survive! 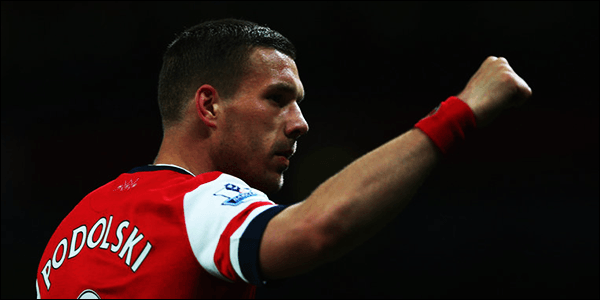 It is January's transfer window and the Serie A teams are trying to arm themselves up for the rest of the season. A.C. Milan has already confirmed the signing of right-back Sebastian Corchia for £10.5M from Lille, but the want to arm themselves a little bit more.
Following Stephan El Shaarawy's 2 months setback, A.C. Milan has announce the loan in of Arsenal's German player - Lukas Podolski.

Podolski is set to move on loan to the Italian squad until the end of this season. He is unsettled at Arsenal and wanted out, but Milan wants to see how will he play in Black&Red before signing him permanently. Podolski is the 3rd Gunner in the Rosenneri's squad, joining Mathiue Flamini and on-fire Joel Campbell.

Now A.C. Milan are set for the rest of the season, hoping to keep the 1st place to themselves.
Login to Quote

Icarus
5 years
Wow who would have thought Milan would have enough reputation to lure Podolski to their club haha, nice signing but doesn't he clash with Menez? same type of player 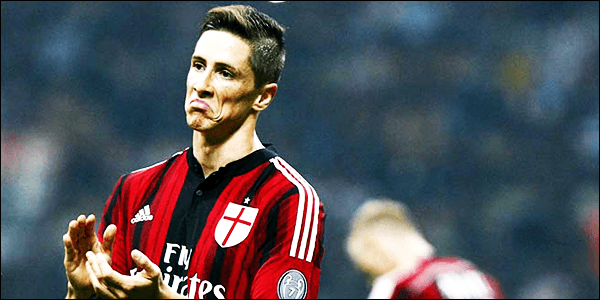 After a fine start to the season, A.C. Milan are hoping to continue their impressive run-of-form at the start of 2015. Here are the list of fixtures:

Although recording their first defeat of the season against Napoli, Milan looks like they are keen on winning the Serie A title this season. Aside from the lose and a draw against Torino, Milan has won all of their other matches. That includes games against Inter, Juventus, Roma and Fiorentina

At the Italian Cup Milan have progressed to the Semi-Final after knocking out both Palermo and Juventus. 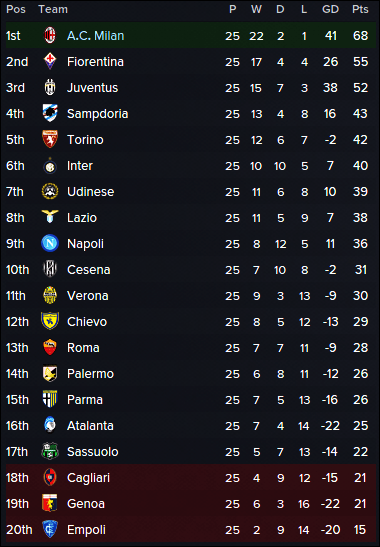 The Rosseneri are holding strong to the 1st position, and they will try to keep it that way until the rest of the season.
Milan's next game is the away Semi-Final of the Italian Cup against Fiorentina. If Milan will progress to the final they will face either Roma or Sampdoria
Login to Quote

Justice
5 years
That is a fantastic run of form, the league is your's for sure!
Login to Quote

Jamesg237
5 years
The league title already has your name on it. Keep up the good run of form and you could win it by one heck of a distance!
Login to Quote

Red Devil
5 years
well, that's a nice form, you clearly deserve to win the title and i'm sure you will !
Login to Quote 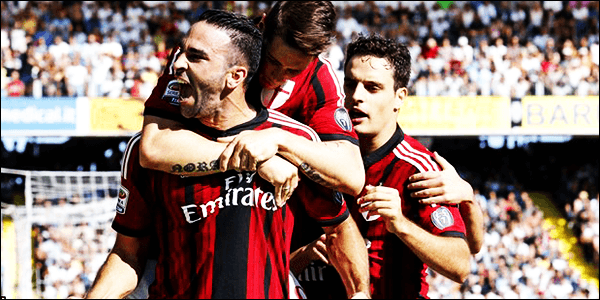 Wow! What a season it was for Il Rossoneri. It all started with the appointment of young manager Or Dabool at the start of the season. Now, the season has ended and A.C. Milan has earned what they have been dreaming about - winning the Scudetto.
A.C. Milan has finished 1st at the Serie A with no less than 94 points!

Also, Milan has finished their season with a massive clash against Roma at the Italian Cup Final and won 3-0 to do the double!

Or Dabool, Serie A manager of the year, has interviewed and said:
"I did absolutely nothing compared to my players. They are the real heroes of this story. Each time, when things seemed lost, they have proved their worth! FORZA MILAN!" 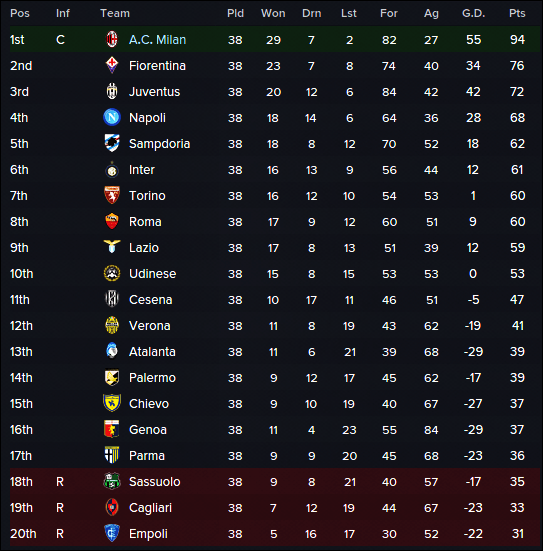 Now the real challenge for Dabool is to retain the good things of this season, while improving even more in order to compete at the UEFA Champions League next season. Will they be able to impress in the biggest stage of Europe?
Login to Quote

No1VillaFan
5 years
WOW Parma almost got relegated! you have done well though good luck next season
Login to Quote