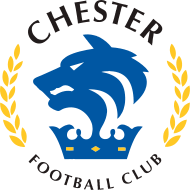 Hello and welcome to my Chester FC story about how I guide the club into the upper echalons of football.

It will be hard and it will be tough but I aim to guide this club back into the football league and then go from there.

The club was saved from relegation last season so I thought it would be a good team to build up and make a footballing superpower.

Chester Football Club is a supporter-owned football club named after the English city of Chester, but which actually plays in Wales by virtue of its home ground, the Deva Stadium being over the border. The club was founded in 2010 following the winding-up of Chester City F.C. The club, which plays its home games at the Deva Stadium, began its inaugural season in the Northern Premier League Division One North following a successful appeal to the FA against their initial placement in the Northwest Counties League.

In the club's first three seasons it was the successive league champions of the NPL Division One North (2010–11), the NPL Premier Division (2011–12), and the Conference North (2012–13). Although Chester F.C. finished in the relegation zone in its first season in the Conference Premier (2013–14), the club earned a reprieve after Hereford United was expelled for financial problems.

.Gain promotion into the football league
.Get to the highest league position in the clubs history
.Reach the Premier League
.Build a new stadium
.Become a club legend
.Have a player from my team break the clubs appearance and goal scoring record
.Get into a European Competition
.Win the Premier League
.Win the FA CUP/League Cup
.Win the Champions League
.Become the best team in the world
Login to Quote

Official Tiza
8 years
Loving the ambition! Looking forward to this story very much!
1
Login to Quote

Tallery
8 years
Good luck, hopefully this can become one of the many great LLM stories we have on FMScout


Thanks mate cant wait to get started

Thanks. I hope so too

FM-LD
8 years
I didn't realise you were back on FMScout. Welcome back Matt! Good luck!
Login to Quote

Jamesg237
8 years
Those are some high ambitions but with dedication I am sure you can achieve them all. Good luck and I will definitely be following with keen interest.
Login to Quote

You are reading "The Chester Mission".