Denzy
7 years
Good luck with this mate, should be a fun save
Login to Quote

AS4
7 years
Wow!
Really nice signing in Mastour! I am honestly a bit surprised that he signed for Sassuolo

Good luck with this. Knock 'em off

The Sassuolo manager has today told press he is 'ready' for the Serie A season to begin. In a interview earlier today with the likes of Sky Italia and many other radio stations and TV Broadcasters, the 22 year old said, "We have shown a lot of confidence in pre-season and training and I believe we have what it takes to get a top 10 finish this year."


Pinnell was also asked about former captain and midfielder, Francesco Magnanelli, who is unhappy at the club after he was sacked of the captaincy at the club and has shared a few negatives with the press recently about the Englishman. He said, "To be honest, he can get the f*ck out of this club, he is giving the club a bad reputation and we want no selfish, two-faced players here at Sassuolo. So yeah he can leave this club and for any clubs wanting this lad, £2M and he's yours."

Sassuolo have had a mixtured pre-season with wins to German sides Unterhachting and Mannheim, however they loss to another German side, Halle. Finally they drew to Serie D side, Guilianova. They then face Serie B darkhorse, Spezia in the Italian Cup in the 3rd qualifying round of the Italian Cup. 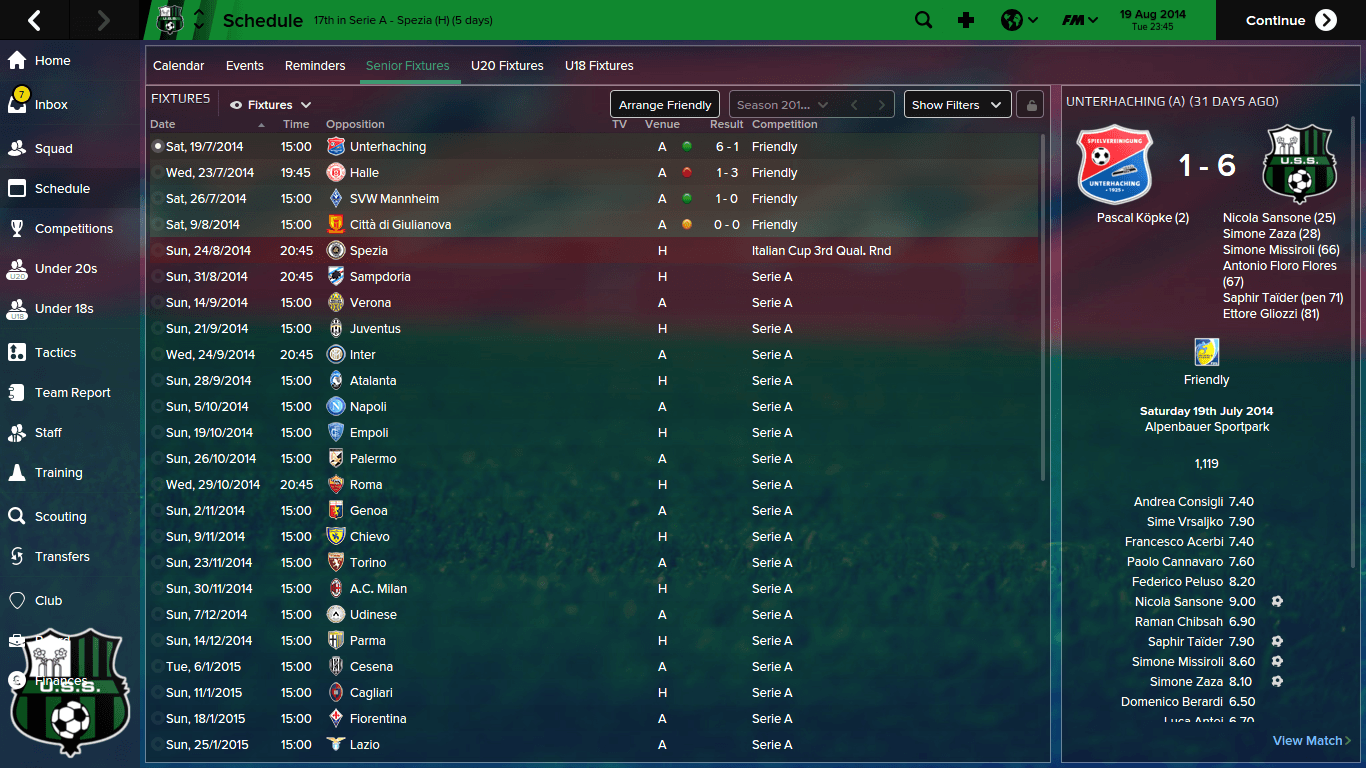 Denzy
7 years
Good luck in the Season, Not an easy start at all! Juventus, Inter, Atalanta and Napoli Damn.
Login to Quote

OwenFWTFC
7 years
Sorry for not reply on past comments, but thanks for the support. I will be more active in feedback now.

Denzy - Thanks, I will need it!
Login to Quote

Today was the day, the cup game. The day began and I was drawing out the tactic I had in mind for the players. After several snacks, throwing paper into the bin shots and twirling of pencils, I came to the conclusion of a 4-2-2-2, with 2 center midfielders and attacking midfielders, just behind the two strikers. Here is my tactic and the team I chose for the game and just to point out, Berardi DID feature in the game, however for future note I pointed out he is suspended for the first 3 games of the Serie A season. 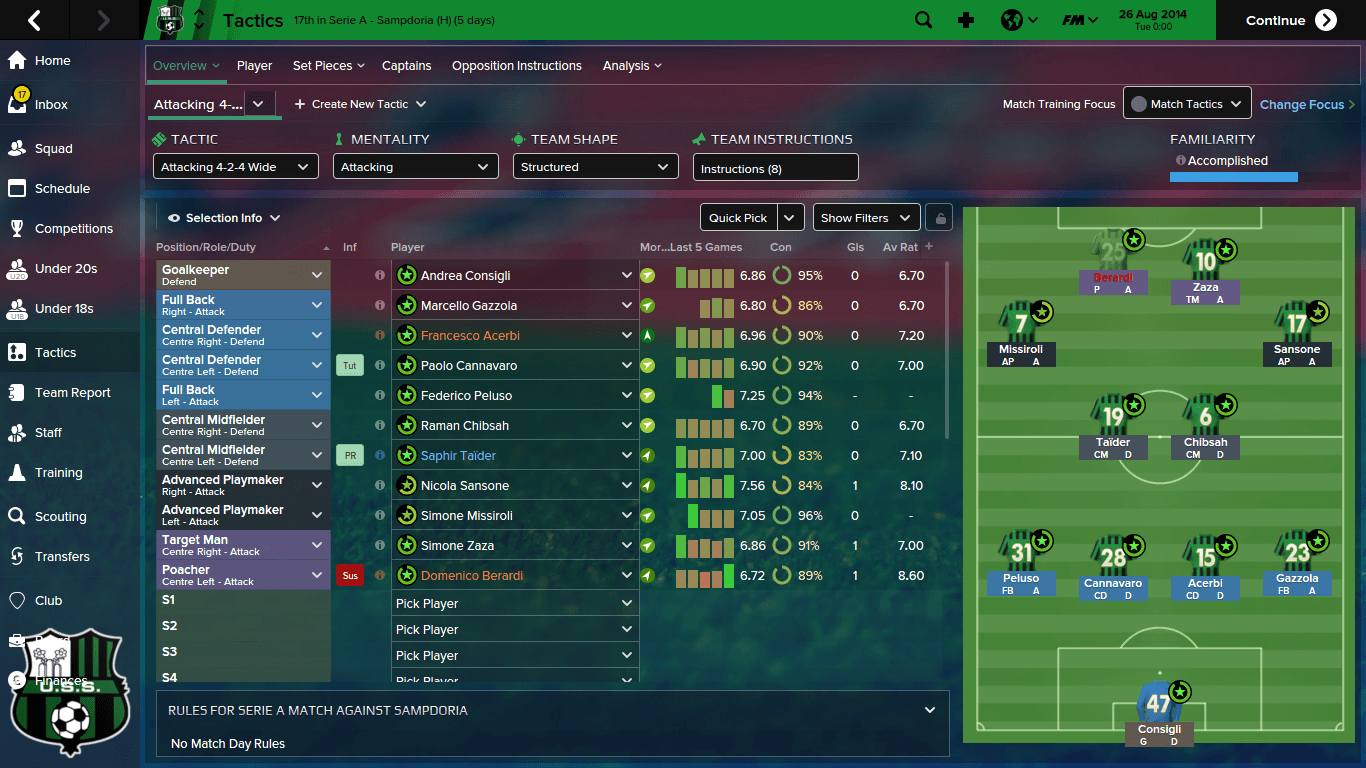 The players arrived for the game and got changed, I told them the team and everyone was happy. We all had a light lunch and then we relaxed ahead of the game. Some listened to a bit of music, some meditation and some had a little banter with the other lads. It was nice seeing the team in good spirit before the game. Then it was time.

Standing on the touchline ahead of the cup match against Spezia was something special for me. I could finally do something I wanted to do, something I lived for. As the whistle blew, I bellowed, "C'mon Sassuolo!" I was ready, the players were ready and the fans were ready. The game was on and as soon as it started I could see the determination in the players eyes, they wanted to prove a point to me, to say that they should be picked week in week out. We looked sharp as soon as the game started and just 8 minutes in, Simone Zaza slotted a fantastic through ball for the young Italian, Nicola Sansone who comfortably poked the ball into the bottom right hand corner. From then Spezia had no chance, goals from Berardi and the man who made the first goal, Zaza, really killed the game off at half-time, as we went in Sassuolo 3-0 Spezia.

When the lads came in for half time, I said, "Brilliant keep it up, don't rest as Spezia have proven they can come back if teams rest, so ensure we keep this cushion, well done lads and keep showing the Sassuolo passion"

The team talked worked too, although Spezia did pull one back, we held on and won comfortably, we were all over them and were very unlucky not to score 2 even 3 more in the second half. I told the lads I was proud of them and we progress to the next round with our heads held high and go into the Serie A season full of confidence! Bring on the big boys!
Login to Quote

Tallery
7 years
Great detail and great tactic, 4-4-2 always works for me on FM15
Login to Quote