I have decided to do two stories at once. Along with my RB Leipzig story I will also be doing a PSV Eindhoven story, this one will be more of a mainstreamed story and will hopefully update this one quicker and release the updates as I make them unlike my RB story where I am spacing out the updates. The goal of this story is to get PSV to the top and have a Dutch team finally win the Champions League once again. I hope you guys enjoy, follow and comment on this story as much as you have on my other two stories.

Philips Sport Vereniging ,abbreviated as PSV and internationally known as PSV Eindhoven is a sports club from Eindhoven, Netherlands. It is best known for its professional football department, currently playing in the Eredivisie, and is one of the country's "big three" clubs who have dominated Dutch football (and who are the only three clubs that have never been relegated from the top division.

The club was founded in 1913 as a team for Philips employees. PSV’s history contains two golden eras revolving around the UEFA Cup victory in 1978 and the 1987–88 European Cup victory as part of the continental treble in 1988. The team has won the Eredivisie 21 times, the domestic cup nine times and the Johan Cruijff Shield nine times. Currently, PSV is 28th on the UEFA club coefficients ranking. Throughout the years, PSV established itself as a stepping stone for future world class players like Ruud Gullit, Romário, Ronaldo, Ruud van Nistelrooy and Arjen Robben.

Since its foundation, it has played in the Philips Stadion and has upheld its club colours (red and white). Its elaborate connection with Philips can be witnessed in its sponsoring, shared technology and board member ties. Fans have named themselves 'boeren' (Dutch for either peasants or farmers), taking pride in Eindhoven's status of being a provincial city and their Brabantian heritage.

No1SwansFan
6 years
Good luck mate! Signed Memphis Depay as part of my Inter story, and he's been outstanding! Keep hold of him at all costs haha

Cocu Out, van Nistelrooy In As New PSV Manager 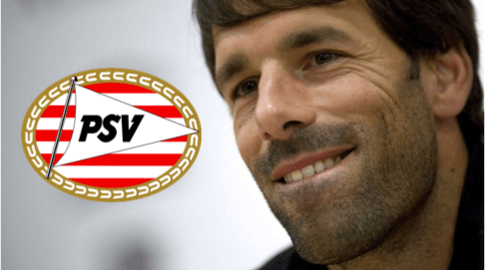 PSV Eindhoven have fired manager Phillip Cocu has head coach of the club today. Cocu was with the club for only one season, it was a disappointing season finishing fourth in the Eredivisie, outside of the Champions League spot with a very strong team that many though would've had at least finishing second with an outside chance at the title. The club have immediately hired form Dutch Assistant Manager and club legend striker Ruud van Nistelrooy. Van Nistelrooy played for PSV from 1998-2001 before a blockbuster deal to Manchester United and later Real Madrid. He also made 70 caps for Dutch National Team scoring 35 goals in his time with the National Team. As an assistant manager at this years World Cup helping the Neitherlands have a very solid showing by finishing third by beating host national Brazil in the Third Place Game.

At the press conference today van Nistelrooy said "I am very happy to stand in front of you today as the new manager of PSV, it is an honor to come back to the club that really got my career started and was the reason why I had such a good career is thanks to this club and my development when I was here. My goal is to bring this club back to the glory days of the late 80's and hopefully getting us on top of Europe once again, not just for PSV but to do it for the country of Netherlands because it has been far too long since a Dutch side has won the Champions League and the people of this great country deserve that."

Haynesy96
6 years
No1SwansFan:Thanks, ya that will be key to my long term success down the road, hopefully I can keep him for a long time.
Login to Quote 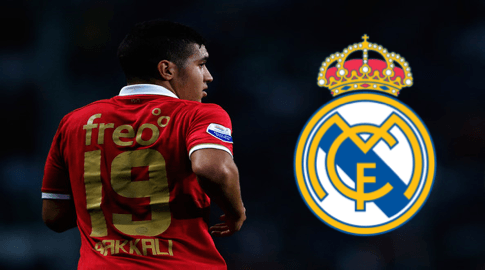 Contract rebel Zakaria Bakkali has got his move away from Eindhoven with a switch to Real Madrid for $6.25 million. Van Nistelrooy did not want to sell the young Belgian wonderkid and with his contract expiring next summer and Bakkali refusing to sign an extension RVN had no choice but to sell him while he still could get money for him, so the result is a move to Real Madrid even though 12 other clubs made offers on Bakkali it was Real Madrid who won his signature.

After a fantastic World Cup, Memphis Depay has drawn interest from all across Europe drawing interest from Manchester United, Manchester City, Atletico Madrid and Bayern Munich as well. Van Nistelrooy has said that he does not expect the Dutch International to leave as he has told him he will be loyal to the club for the time being and wants to see where the club goes in the upcoming seasons and then will reevaluated a move to a European powerhouse.

PSV have been rumored to being interested in Aston Villa midfielder Leondro Bacuna, the 22 year old Dutch midfielder would be available for around $10 million and could be an influential player for the Boeren this season if they do decide to sign him.

PSV have also terminated the loan deal of Andres Guadrado from Valencia as they already have Memphis Depay on the left wing and they decided they were spending too much money on him based on the role he will play throughout the season.

Other PSV players are drawing interest from Premier League teams including Willems, Wijnaldum, Narsingh and 17 year old Kenneth Paal. PSV are expected to keep all of these players as they seen them as key players for the upcoming season and there would need to be a fantastic bid to draw one of these players away from the Dutch club.

Tallery
6 years
Good luck. PSV have tonnes of top talent, and it will be interesting to see if you can keep them and topple Ajax
Login to Quote

It is that time of the year again, the start of the Eredivisie and we are here to preview the upcoming season for PSV Eindhoven. PSV are brought in a new manager Ruud van Nistelrooy to help right the ship at PSV after a disappointing 2013/2014 campaign saw PSV finish fourth, that is tied for their worst finish in well over 30 years. The media have predicted them to finish 2nd behind Ajax. The only major signing for PSV this years Dutch striker Luuk de Jong from Gladbach for a fee of $5.5 million. They let go of Zakaria Bakkali due to his contract which was expiring and refusing to sign a new one they decided to let him go to Real Madrid. Important players for the team this year are Depay, Wijlnaldum and Narsigh who have all attracted interest from European clubs throughout the summer but for the time being PSV have been able to hold onto all of them as they will all be key pieces of the puzzle to success for PSV this season.

Haynesy96
6 years
Jonte, Tallery: Thanks guys! I was able to hold onto the guys I was hoping for, I knew Bakkali was going to leave so I didn't have much hope for that.
Login to Quote

PSV dominated the entire first leg defeating Scottish side Motherwell 4-0 on the back of four goals from PSV's best player Memphis Depay, Narsingh, Hijemark and Willems all had assists on the day. Jeroen Zoet made all four saves needed to secure victory for Boeren on the day.

A game that was played save by PSV saw them go through into the next round with a 1-1 draw at Fir Park. Wijnaldum opened up the scoring in the 48th minute then shortly after Josh Law from Motherwall equalized in the 54th to get the draw for the hosts. PSV will take on Hungarian side Ferencvaros in the Europa League Playoff Round, first game is in Eindhoven before PSV will travel to Hungary for the second leg.

walkinshaw
6 years
Good luck taking down Ajax mate, PSV have a good first team so try and get those titles b4 those killer Ajax youth come along

Haynesy96
6 years
walkinshaw: Thanks, I'm hoping eventually I can have the better youth academy then Ajax but we will see.
Login to Quote

PSV managed a bore 1-0 victory over Swizz side Vaduz in the first leg of the Europa League Playoff. Deeply put the visitors up just after halftime with a brilliant chip over the keeper and a red card by Hofstetter of Vaduz sealed the fate of the Swiss side in the first leg but PSV were unable to capitalize on the red card for the rest of the match.

PSV locked themselves into a spot in the Europa League Group Stage with a 4-1 win over Vaduz with a 5-1 aggregate win over the Swiss club. PSV got goals from four different goal scorers (Rekik, Depay, Locadia, Wijnaldum) en route to victory. Rekik lead the way with his solid defending and also scoring the opening goal for Boeren. PSV will most likely be a one seed for the group draw tomorrow.

It was a great start to the season for PSV as they have won all five of their first games to start the Eredivisie. PSV was led by Player of the Month Memphis Depay who had three goals and a couple assists in the Eredivisie this month. PSV had an inspired performance against Heerenveen, they were down 2-0 early and 2-1 in the 85th minute and two goals in the late minutes from Jurgen Locadia led the Boeren to victory on the day.
POTM: Memphis Depay - 3 Goals, 2 Assists, 7.4 Rating (Eredivisie) 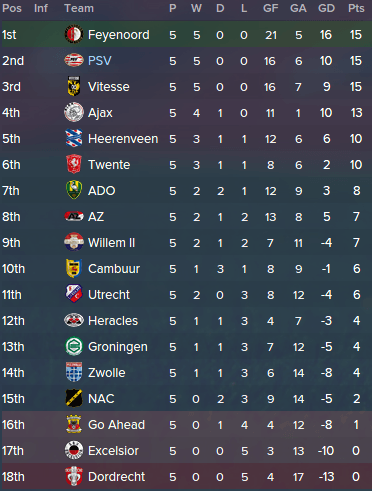 PSV have been drawn with Ukrainian side Dnipro, Switzerland side Zurich and Bulgarian side Litex. This is a fairly easy group for PSV, qualification for the knock rounds should be easy but Dnipro may pose a threat for top seed in the group but only time will tell.
Login to Quote

You are reading "PSV Eindhoven - The Dutch Revival".