Welcome to FM Chairman Game 2015. If you would like in, pc me or pm me and we will sort something out if we can.

Chairmans and Sides with Budgets 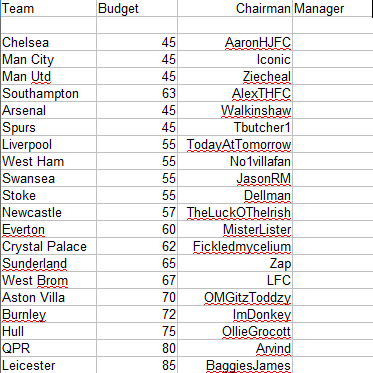 I have been generous with the transfer budgets, I expect a PM everytime a deal is made, you must include the side you have signed them from and the value of the transfer so I can keep a eye on the budgets to make sure your not overspending.


You are allowed 5 foreign transfers, 5 lower league transfers and ONE freebie transfer (I will post a list of the top freebie transfers with 12 hours of the window to go. These will be on a first come, first serve basis). All offers must be £3m over the value of that said player.

You May put a press release up about buying the club at the start if you would like to and you may post about signings ONCE they have been confirmed at the end of the transfer window.

You may also change your manager for free at the start of the game. If more than one chairman wants the same manager, there will be a bidding war that would come out of your transfer budget.

Any awards (World Player Of The Year and Balon D'Or)

Have fun and happy Transfer Window
1
Login to Quote

Dwells5
6 years
I got a message saying I was in charge of Aston villa??
Login to Quote

Fickledmycelium
6 years
I may have a surprise appointment

Today, Crystal Palace have announced the loan signing of Andy Caroll, with Dwight Gayle heading to West Ham as the backup.


"We are delighted to announce this signing, thanks to the people who worked on this, they were a pleasure" Chairman Fickled has reportedly said.
Login to Quote

SimichC
6 years
Denis Stracqualursi for me!
Login to Quote

Update, Please put what manager you would like in the thread, if you do not then i will expect that you want the same manager thanks, they can not be in the premier league already thanks

Ziechael
6 years
Due to interest from various parties Man U have listed Carrick and Rojo as being open to offers.
Login to Quote