mpejkrm
5 years
Hello everyone. Some of you might remember me from my World Cup Challenge that I worked on last year on FM14. School has hampered my FM time this year, but I am close to done, the workload has softened and I wanted to start another FM story. So in the theme of international management (which I much prefer to club teams), I have decided to start another World Cup Challenge. This time I will simply be trying to win the World Cup with every North American team. It is most likely impossible but I want to take a stab at it. I have already started and will be transferring over a couple of posts from another website. I hope you all enjoy. Please comment whenever with any suggestions or tips.

mpejkrm
5 years
We begin our journey in...

The DR is a baseball nation, we all know that. Can we break through and reach the World Cup one day?

Changes from the initial squad Scheduled friendly with Canada on 10.8.14 has been cancelled due to the CC.
Login to Quote 
Results
All matches were Caribbean Cub matches played at neutral sites in Cuba.

All matches were Caribbean Cub matches played at neutral sites in Cuba.

Pretty rough finish but a semifinal appearance was a great result.

Friendlies likely for a while. We didn't qualify for the Gold Cup so mostly friendlies until WC Quals open (I think in 2016).
Login to Quote

mpejkrm
5 years
OK I am all caught up now. Continuing this today.

Victor Santiago (Aged 34) and Miguel Cabral (33) were both aging members of the squad who decided to call it quits. Luis Corporan (17) was a very promising midfielder who retired due to an inability to find a club. Kevin Almosny Rossiter and Mora Rodriguez were also in the same boat, but neither were key members of the squad.

The preliminary round of the 2018 WCQ for the North American region (CONCACAF) have been drawn. Each of these teams advances into the first round, another two-legged tie. 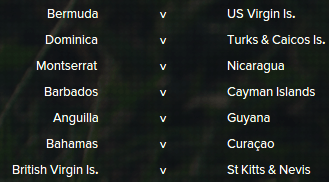 No need to add anyone since we already deep at striker and it's just a friendly. Mariano will be back in the next squad.

Heartbreaking result as we fall on a free kick following a foul in the 75th minute. Cayeton Bonnin scored his first goal for the senior squad. 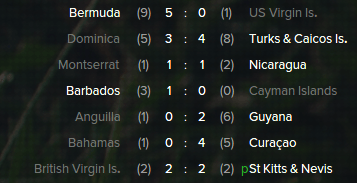 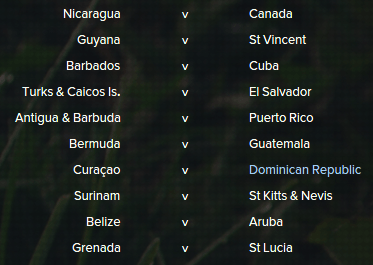 We get a very difficult draw with Curacao, possibly the best team to come out of the preliminary round. The first leg is scheduled for September 5 in Curacao with the return trip at home on September 9.

We are back in action in June with two home friendlies: St. Kitts and Nevis and Guatemala.
Login to Quote

To my surprise, we were included in the draw for the 2015 Gold Cup. Maybe I am not fully understanding of how the field selection works, but we are in. The DR has never qualified for the Gold Cup before, so this is a huge step forward in our international stature. Here are the groups: 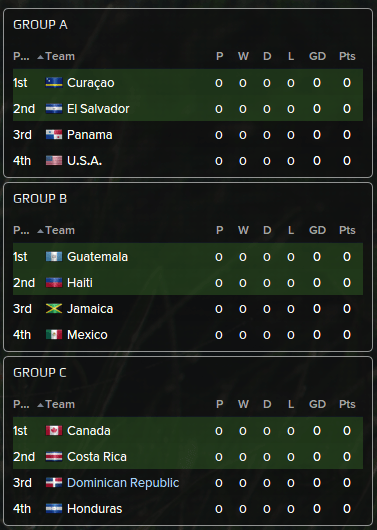 We have a very difficult group. The goal here is just to stay competitive. If we win, great, if we lose, it's alright. We are playing mainly for pride here.

I believe you do have a few youths in the RM cantera, you can do it, vamos!
1
Login to Quote

I believe you do have a few youths in the RM cantera, you can do it, vamos!

Thanks mate. This will be a challenge but we are off to a nice start already.
Login to Quote

We got a nice result against St. Kitts & Nevis, although I do think we should have beaten them by more. However the result against Guatemala was disappointing, they aren't really that much better of a side than us and to get shut out at home is bad.

Next up is the Gold Cup next month.
Login to Quote

Dominican Republic boss Mitch Collins has announced his 22 man squad for the 2015 Gold Cup in the United States next week. There are no major surprises. However, Collins has elected to use a 22 man squad due to a number of injuries. "We don't feel any of the U20s are quite yet ready to contribute at the senior level. We are comfortable in depth that we feel we can roll with 22 men."

19:00: PREPARATIONS UNDERWAY FOR FINAL GAME OF MATCHDAY THREE
10 of the 12 nations participating in this year's Gold Cup have already played their first match of the tournament. The first set of matches concludes here at Ford Field in Detroit as Canada take on the Dominican Republic under the lights. The Canadians are playing in their ninth consecutive Gold Cup and are looking for their third title, with the last coming in 2000 and the other in 1985. This is the first Gold Cup for the Dominicans, and the first Gold Cup for young boss Mitch Collins.

19:15: TEAMS NEARLY READY FOR KICKOFF
Both Canada and the Dominican Republic are looking for a win to take the lead in Group C after Costa Rica and Honduras fought to a 2 - 2 draw earlier today. Upwards of 13,000 fans are expected to be attendance today at Ford Field, which can hold 20,000 spectators for football matches. Tonight's referee is Harrison Potts. The American will be refereeing his first match of the season.

19:20: BETTING LINES FINALIZED
Sky Bet have finalized tonight's betting lines. Canada are listed as favorites at 4-6 odds, while the Dominican Republic are underdogs at 7-2 odds. A draw is favored at 9-4 odds.

19:30: LINEUPS ANNOUNCED
Both Canada and the Dominican Republic have confirmed their lineups for tonight's match 30 minutes prior to kickoff.


20:00 KICKOFF Canada 0 - 0 Dominican Republic
And we're off from Detroit! Canada take the ball first to open the match.

20:07 CHANCE Canada 0 - 0 Dominican Republic
Oh so close for Canada! Teibert's cross connects with the head of Ricketts but his header hits the crossbar and bounces out! Heinz Barmettler clears past the touchline and the Dominicans catch a lucky break.

Potts hands out his first yellow card of the match as he books Acosta following a hard tackle from behind on Piette.

The Canadians strike first! Teibert's free kick is picked up by Kajgo just outside of the six-yard box, but it is deflected by Bonnin right into the leg of Ethan Finlay who easily slots it home in the bottom left corner for his first international goal.

20:43 CHANCE Canada 1 - 0 Dominican Republic
The Dominicans nearly strike back! Martinez's long ball connects with Mariano and he goes one-on-one with the keeper, but his shot is saved after a diving stop! Acevedo attempted a cross following a rebound but the Canadians thwart the attack.

Just before halftime the Dominicans see one of their most crucial players go down. Jonathan Faña takes a hard hit to legs and is forced to come off. Edu Marcel comes on to replace him.

20:45 HALF TIME Canada 1 - 0 Dominican Republic
Halftime from Detroit, where Canada holds a 1 - 0 advantage over the Dominican Republic after Ethan Finlay's close range shot in the 36th minute. The Dominicans have just seen one of their top players, Jonathan Faña, leave to injury. Can they overcome it and dominate the second half?

And just out of halftime Harrison Potts hands out his second yellow card of the match. This time it will be on Cesar Ledesma who tackled Teibert hard and brought him down near the touchline.

Not even a minute later, Potts hands out another card, but this time it's to the other side! Edu Marcel is tripped by Ledgerwood trying to dribble through the defense and it taken down hard. Canada gets their first booking of the match.

21:12 SUBSTITUTION Canada 1 - 0 Dominican Republic
Canada will bring some fresh legs on to try and add another goal to their tally. Lucas Cavallini and Will Johnson come on, replacing goalscorer Ethan Finlay and Tosaint Ricketts.

21:15 CHANCE Canada 1 - 0 Dominican Republic
Another close chance for the Dominicans! Ledesma's cross is played perfectly into the foot of Espinal but his close range shot is saved easily by Borjan.

Just 20 minutes after his first booking, Cesar Ledesma is sent off! His hard tackle from behind on Cavallini was not tolerated and Harrison Potts had no issue sending the Dominicans down to ten men! It will be a challenge for Mitch Collins' side now!

The Dominicans have done the unthinkable! With ten men they have come back to tie the match! Marcel's free kick is saved by Borjan as he dives to his right, but Bonnin picks up on the rebound and fires it across the net before Borjan has a chance to get up off his knees!

Scenes at Ford Field! Mariano's perfectly placed pass to Edipo who was just onside in the box and he shoots it past the keeper into the upper left corner and the Dominicans take the lead!

21:45 FULL TIME Canada 1 - 2 Dominican Republic
Harrison Potts blows the whistle for full time and the Dominicans have picked up a HUGE win here in Detroit! They take the three points to move the top of Group C!

You are reading "The North American Challenge".