Icarus
5 years
took a while for the first win to arrive, but it's early days yet and you can still aim for a playoff spot I think - these graphics look legit btw

Bashy345
5 years
Doing not so bad not so good only first steps.
Keep it up, your graphics look amazing though
Login to Quote

Michael Duberry: 'I'd hoped for a better start' 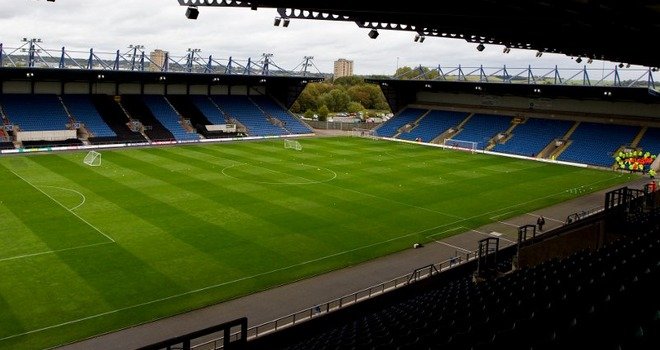 Oxford United boss Michael Duberry has told Sky Sports that he is disappointed with the start he and his new team have made to the 2014-2015 season.

The U's recorded just one win last month, narrowly edging past Dagenham and Redbridge with a 1-0 scoreline, and lost three games in all competitions. Although it is early days in Duberry's career as a manager, he was clearly disappointed in the results during the interview.

"Michael has been a bit unlucky I think in some of the games he's played. But you can't afford to be unlucky in football. Michael's team didn't really show any of the passion he talked about in pre-season in their run of games last month, and to me, an avid follower of the club, that's disappointing."

But Duberry has hit back at Simpson's claims that he and his team lack passion.

"I think it's a silly statement to make to be honest with you. This is my first job in management and I'm trying my utmost to bring a positive style of play to the team. Inevitably, it's going to take a while for the team to adjust to the way I want to play, but we do need to start getting results sooner rather than later. I don't think Paul has helped the situation at all really. What are we, five games into the season? It's early days and I thoroughly believe that we can change our fortunes.

I had hoped for a better start, but it hasn't happened and we've got some work to do. I've got full faith in my abilities and the ability of the team we have here and the fans needn't listen to Paul. There's nothing to worry about here, I assure you."
Login to Quote

Bashy345
5 years
Unlucky man, not the best start a bit early things will get better
Login to Quote

Matt Green: It's good to be back 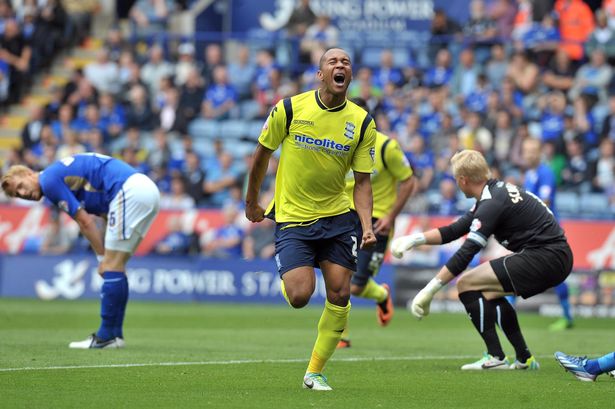 Green celebrates his only Birmingham City goal to date against Leicester. He is expected to be released by the Championship side when his contract expires at the end of this season.

Matt Green has spoken of his delight at being back at Oxford United. The 27-year-old striker helped his side to get back into the Football League back in 2010 and new boss and former U's player Michael Duberry decided to bring Green back on loan, along with a number of other temporary signings.

Green has wasted no time in getting back into the swing of things at The Kassam Stadium, scoring two goals in his first month back at his former side including a goal against former employers Mansfield Town.

Green didn't celebrate his goal against The Stags, who he was sold to by Oxford United in 2012. He went on to make 97 appearances in total for the team, scoring 57 times.

These impressive performances earned him his move to Championship side Birmingham City but a long term injury plagued his career at the Midlands club and he never really made the cut.

Birmingham are expected to release the player from his £400 per week contract in the summer, and Oxford United could well be interested in bringing him back to The Kassam full time, but Duberry is yet to make a comment on these rumours.

"It just feels great to be back here. The Oxford fans are so appreciative and it just feels so relaxing to play for the club. I really hope I can net a few more goals along the way this season and hopefully impress the coaching team here enough to maybe earn a place back here next year."
Login to Quote

Icarus
5 years
Greens quality, you did the right thing bringing him back to the club 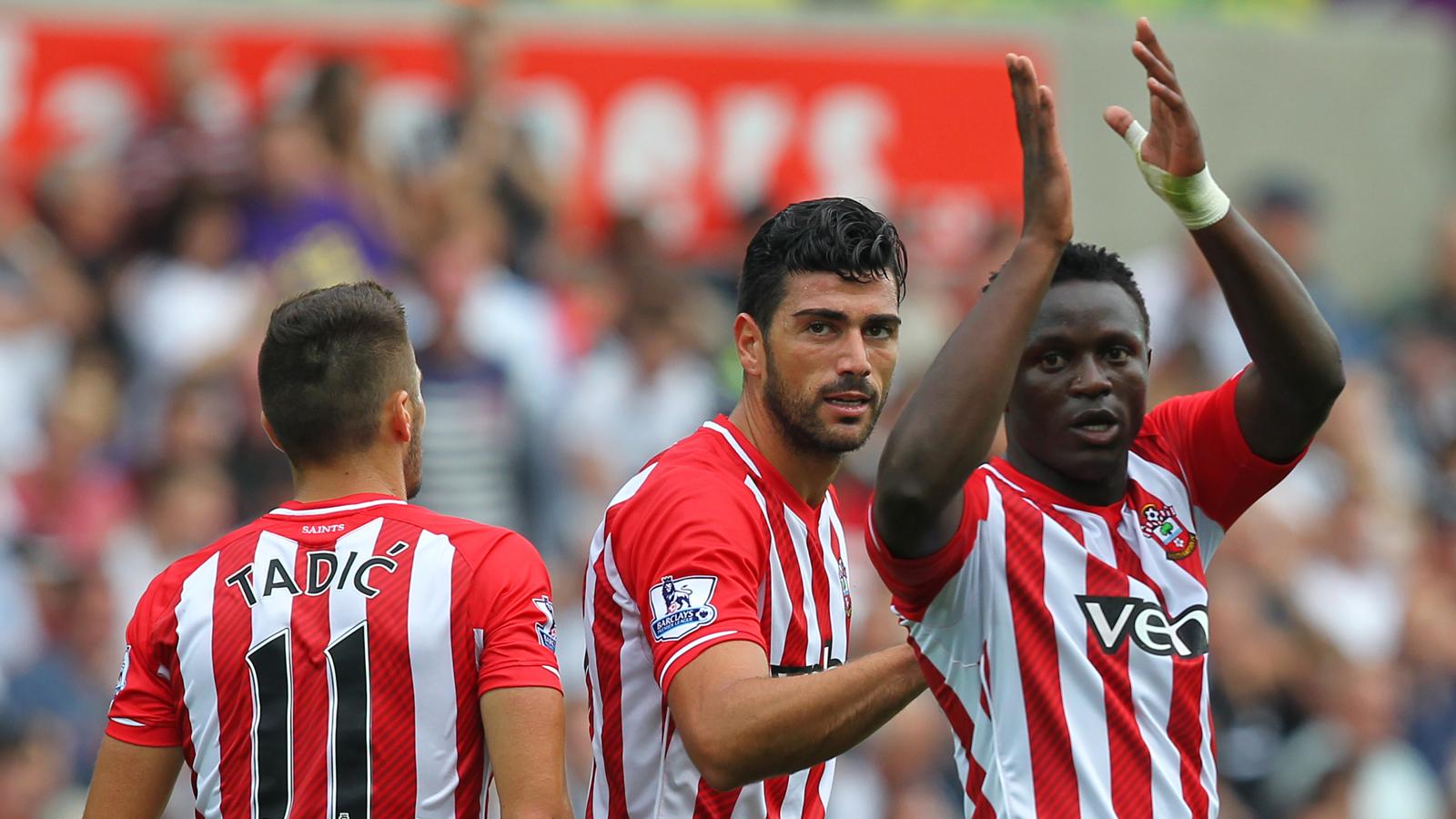 Southampton are pleased to announced a deal has been reached between club owner Katharina Liebherr and Oxford United owners Darryl Eales and Mark Ashton which will see the two teams partner up for the foreseeable future.

Benefits of the partnership will include greater relations with lower league teams, and young players will also get the chance to go out and impress on loan at The Kassam Stadium, home to Oxford United. More about that soon.

Southampton will pay Sky Bet League 2 side United £40,000 per year in order to help them out financially. This is a very small fee for our club to be paying, so finances here are still in great shape.

The two teams will also hold an annual friendly match in which we will be able to give our youngsters a run out against our new partners.

We pride ourselves on our fantastic youth setup here on the South Coast and we feel match experience is vital for the development of young players. That is not always possible here as we strive to keep up good results and please our fans, and so this partnership allows us to help our youth players develop.

And that's exactly what we've used it for, right from the outset. We can announce that Jake Hesketh, our promising 18-year-old attacking midfielder has joined Michael Duberry's U's until December, with Oxford having the opportunity to extend the loan in January.

Jake has been with the club since the age of eight, and hopes to have a bright career at St Mary's. Hesketh grew up as a Manchester United supporter and has been capped at U19 level by the English national side. 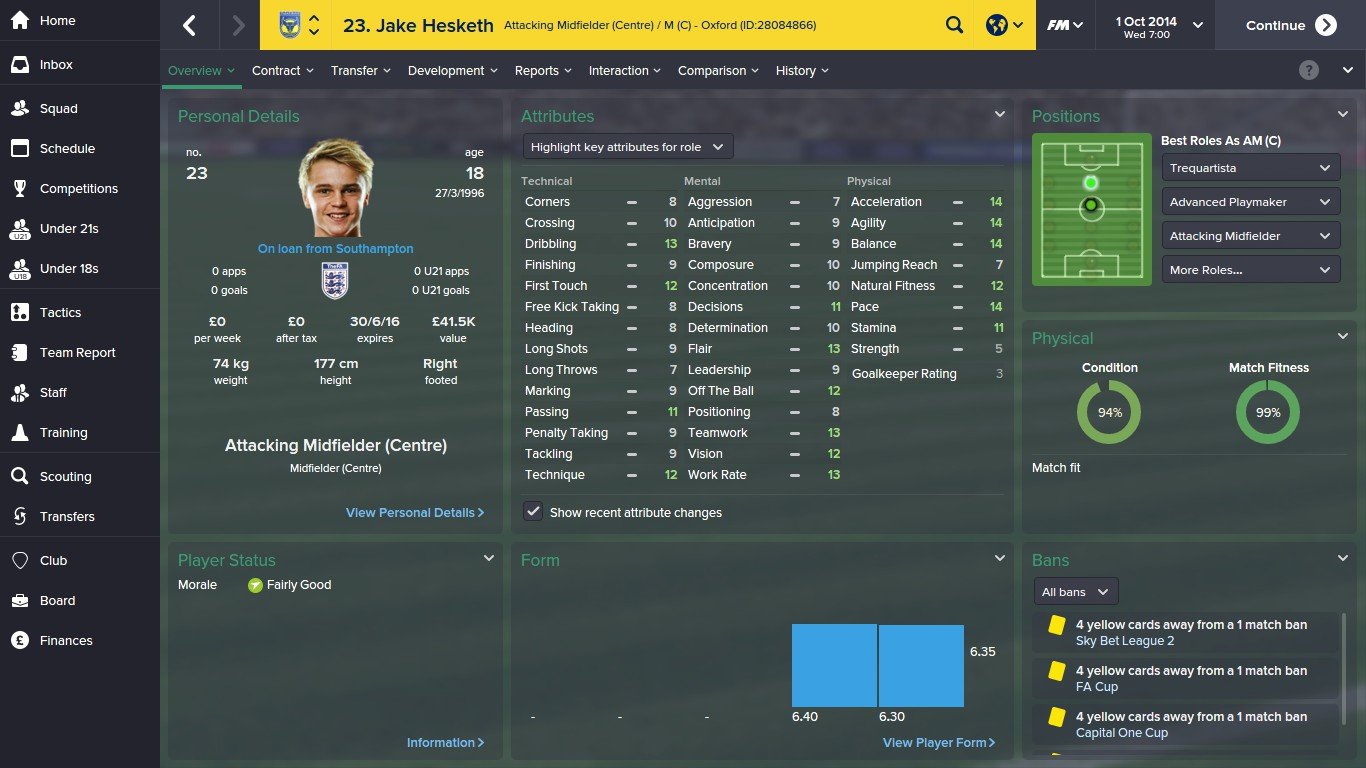 Icarus
5 years
Get Prowse on loan. I heard theres a kid called Manè that's not too shabby either, look him up.

pompeyblue
5 years
I can't believe this... 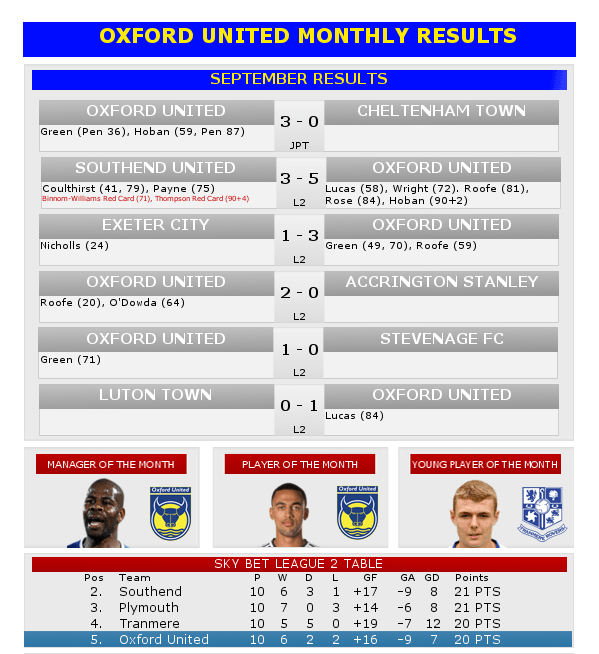 pompeyblue
5 years • Edited
What a month! Gotta say, Kemar Roofe is raising the roof in L2...
Login to Quote

Jer
5 years
Seems like you adjusted your tactic, fantastic month! Nice to see you linked with Soton as they have great youngsters and regens in the future

Icarus
5 years
Unbeaten! and tied with 4th in the table, wow you really are making a massive u-turn in your season