President Bernie O'Connell is proud to announce that 30 year old Kevin O'Leary has been hired to take the reins after the sudden resignation of Tommy Dunne a few weeks ago. O'Connell was quoted in saying," I feel like Kevin would be a great fit for the club and I know he is ready to come back into the sport." O'Leary has been away from the sport for the past two year.

The 30 year old was born on 11 November 1983 in Ennis Co Clare. During his youth he would play for local club Ennis Town. After that he would join us for the next few year until moving to Shamrock Rovers where he spent the rest of his playing career. O'Leary joins us after spending the last year in France teaching English as a second language.

In a brief interview O'Leary had these things to say. "I am looking forward to this season with Galway and I hope the supporters have our backs as we attempt to get promoted to the premiership." The 30 year old will have some room in the transfer window this summer to add whoever is needed for the club to grow. In addition to his arrival Galway United has created a partnership with his youth side of Ennis Town.

"I look forward to working with Coach O'Leary. We have already meet and I feel his goals are very achievable this season."- Captain Paul Sinnott.

Fans you have an opportunity this upcoming Friday night as we host our annual open house and meet and greet. Coach O'leary is looking forward to meeting you all. Admission is free and there will be food available for purchase as well as extended hours and %25 off all items at the team store for that night only.

The tribesmen start their inaugural SSE AIRTRICITY LEAGUE of IRELAND 2014/15 campaign with four friendlies starting 21 June, below is the preseason schedule. Also between the friendlies and season is the first round of the new PADDY POWER FAI CHALLENGE CUP on 27 June against TBD. Finally the season kicks off on 9 August as we will be hosting Cabinteelyl at 800pm local time. Thanks man!! I thought Galway was a great choice as they basically came back from the dead.
Login to Quote Head Coach Kevin O'Leary is pleased to announce the signing of striker Guillermo Torres Garcia. The 18 year old has joined the club on a free transfer. Previously Torres Garcia was a member of English club Bolton where he started his career. In his two seasons with the Trotters he failed to make a single appearance for the senior team.

"I am very happy to announce that I am signing with Galway United " said the 18 year old Spaniard on Twitter.

"I feel that Guillermo might be a key part to this team for the upcoming season but we will see."-said Kevin O'Leary. Later on O'Leary noted that Guillermo has no guaranteed starting spot with the senior squad and will have to earn his place especially since he is only 18.

His contract runs until the end of the 2015/16 season.
Login to Quote

Feliks
4 years
Best of luck with this mate!
Login to Quote

No1VillaFan He should easily dominate Ireland
Login to Quote

Kevin O'Leary has just completed his first preseason with the first team and from how the players reacted during it that everything was successful. During the past four weeks the team jelled together and each day the teams communication grew stronger and stronger.

"I feel that Coach O'Leary did an amazing job this preseason. I honestly had my doubts that he was going to be able to coach us but he has proved us wrong. This season will be very enjoyable."- Stephen Walsh.

During the training camp that lasted between 18 June and 29 June the team developed many new strategies and worked on their formation. "So as I did not pay attention to the sport for the past few years I have been out of the loop on tactics. One of my friends sent me a link explaining what Carlo Ancelotti uses at Real Madrid and I was very impressed and after watching some film."- Kevin O'Leary Below we have an example on how this tactic will work. 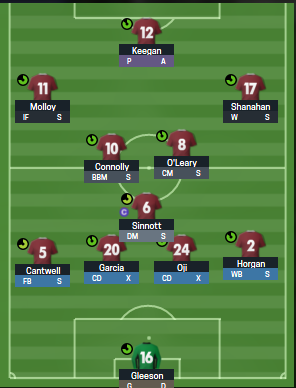 In the four matches that the first team played in they gained a respectable 1-2-0 record between 25 June and 7 July. In each of the four matches the squads were rotated so that the coaching staff could get a taste to see who could be in the starting XI. With this preseason the club faced three Premiership clubs and went 0-2. Despite the disappointing score line against the two premiership clubs they played real hard to get respectable defeats with both scorelines being at 2-1.

On the roster front during training camp O'Leary signed two more players this transfer window. The first is Defender John Sullivan who joined the club on a free transfer. The 23 year old previously played for Shelbourne and is expected to compete for a starting position. Finally the club has signed 17 year old Japanese defender Hideo Nakamura from partner club Sanfrecce Hiroshima for an undisclosed amount. Hideo will join us at the end of the season.

Here is the Current Roster as of 13 July 2014. Just to remind everyone it is not final until 1 September.

Finally the LEAGUE of IRELAND has announced the first round draw of the inaugural PADDY POWER FAI CHALLENGE CUP. We will be facing Burren Utd of League One. The match will be played on 26 July at 3pm. We will be hosting them and tickets are available for €15 and will be available at the box office in Eamonn Deacy Park.
Login to Quote

Iconic
4 years
Your writing is incredible my friend, keep this up and you will be a shoe in for SoTM! Love the detail at the start and the presentation also is brilliant, pretty good Pre season as well. I can't wait for more!

Thanks for the kind words. I am glad you are enjoying it.
Login to Quote

A Delightful Day of First for
Galway United It was a day of first for Airtricity Championship side Galway United, on their first match in the first ever FAI Challenge Cup. It managed by a first time coach who saw his first two signings score their first goals for the club.

Facing the League One side of Burren United Galway were the heavy favourite coming into the match and boy did they ever deliver. It quickly became apparent that the home side would dominate the match and that the visitors were in for a long day. It all started as new singing John Sullivan delivered a well time strike in the 13th minute.

After Sullivan's goal things would quickly fall apart for Burren as Galway scored two more goals. First it was midfielder David O'Leary who scored a well placed shot in the 20th minute. Then two minutes later the 18 year old Spaniard Guillermo Torres Garcia would score on his debut. To close out the first half Alex Bryne would increase the lead to 4-0 in the 40'.

A few minutes before the half a penalty would be turned down and the ref wouldn't take any protest by the home side. "I still can't believe Mr.Sutton clearly missed the fact it was a penalty. He needs to go back to ref school" said head coach Kevin O'Leary.

Luckily for Burren the penalty did not occur and at the half Galway were up 4-0. During the second half nothing really happened as both sides were trying to score as best as they could. There would be no goal until the dying seconds of the match when American Jake Keegan would score his first goal for Galway with seconds to go.

Next up the Tribesmen will hosting fellow Championship side U.C.D. The match will take place on 20 August and will be played at Eamonn Deacy Park. U.C.D. defeated Whitehall by a score of 4-0 in their first round match. Louis O.
4 years
"It was a day of first for Airtricity Championship side Galway United. On their first match in the first ever FAI Challenge Cup managed by a first time coach in his match won by his first signing scoring his first professional goal. "

2015-06-13 10:45#214694 Louis O. : "It was a day of first for Airtricity Championship side Galway United. On their first match in the first ever FAI Challenge Cup managed by a first time coach in his match won by his first signing scoring his first professional goal. "