A not so good meeting After our very disappointing draw against Cherry orchard I was on my way home until our chairman Bernie O'Connell stopped me from leaving the building. It was really late and I did not want to be bothered as I am already in a bad mood. He tells me to get my ass over to his office ASAP or he would fire me on the spot. Oh shit what did I wrong I keep thinking to myself. Yeah October has been bad but..
I quickly enter his office and he tells me to sit down and shut up.

BO: "I don't want to hear any bullshit O'Leary only speak when I say so!"
KO:(To myself I am like Jesus Christ man calm down and hesitantly I say) "Yes Sir"
BO:"We (the board, members of the Co-Op and fans) are very angry about this result. What the hell happened? How do you draw the worst team in the League?"
KO:(I really don't know what to say so like an idiot I say)" It was just a bad day and these things happen."
BO:"No excuses Kevin, we expect winning and promotion and currently in 5th you need to get your head out of your ass if you want to continue coaching here."
KO:"The next few days of practice will be very intense and we need to focus on improvement. I know I let the fans down and I feel bad."
BO:"Feel bad?? What are you 12?? You might have cost us fans as I made this a fan day."
KO:"Look I understand I fucked up this month just please help me in January."
BO:"What do you mean help me?"
KO:"Honestly this team sucks and I want some funds for better players."
BO:"Are you seriously telling me how to run this club?"
KO:(Oh crap I'm dead)"Not at all" he cuts me off mid sentence.
BO:"You are on a short leash fella now get the fuck out of here before I toss your ass out of here for good."


I quietly and quickly get up to leave. My god that was bad. I can't believe that I am about to get fired if I continue to screw up. Soccer is not a fun sport to be around when you are losing. Now I see why i left a few years back. I don't think I will be able to sleep and I contemplate going to the local pub.
Login to Quote

Trials and tribulations could be the best way to sum up the month of October for the club. In all competitions the team went a disappointing 1-3-1. The only win would come in the Challenge Cup Semi Finals. Coach O'Leary was not available for comment this month.

As everyone knows the club will be going to the final of the FAI Challenge Cup next year to face Waterford. It was a great day for the club despite having to finish close to the end of extra time. In other news we have been drawn in the 4th round of the FAI Cup. We will be facing either Burren United once again or Greystones.

League play was dismal to say the least. The team did earn a single victory having to go 0-3-1
The club is currently sitting in fourth place 7 points from first place Waterford United. Currently the team is in 5th place with a nine point gap to Waterford United. "It is starting to get very frustrating here and i do not know what needs to change but it needs to happen fast."- Paul Sinnott.

The biggest positive from the month is that 17 year old Attacking Midfielder Jason Lordan made his debut against Cherry orchard. Despite not getting on the score line he had a pretty good day and it is expected that he will be on the bench as this season continues.

In loan player news Shane McCarthy will be returning from loan at the end of the year. Could we see a blooming partnership of McCarthy and Lordan in the later part of the year?

Finally Ennis Town's striker Michael Whelan will be joining the club on New Year's Day on a free transfer. The 23 year old has been a monster for Ennis Town scoring 13 goals all season.

This is going to sound like a broken record but Keegan is the man of the month for the third straight month. The only bright spot of the month Keegan scored a total of two goals leading the team that month. His most important goal came as the game winner in the cup semi final against Wexford. Great job Jake!

Hopefully November will be a better month. It all starts with a trip to Cobh Ramblers and ends with a match against Wexford. The Fourth Round of the FAI Cup's date and time is still to be determined. 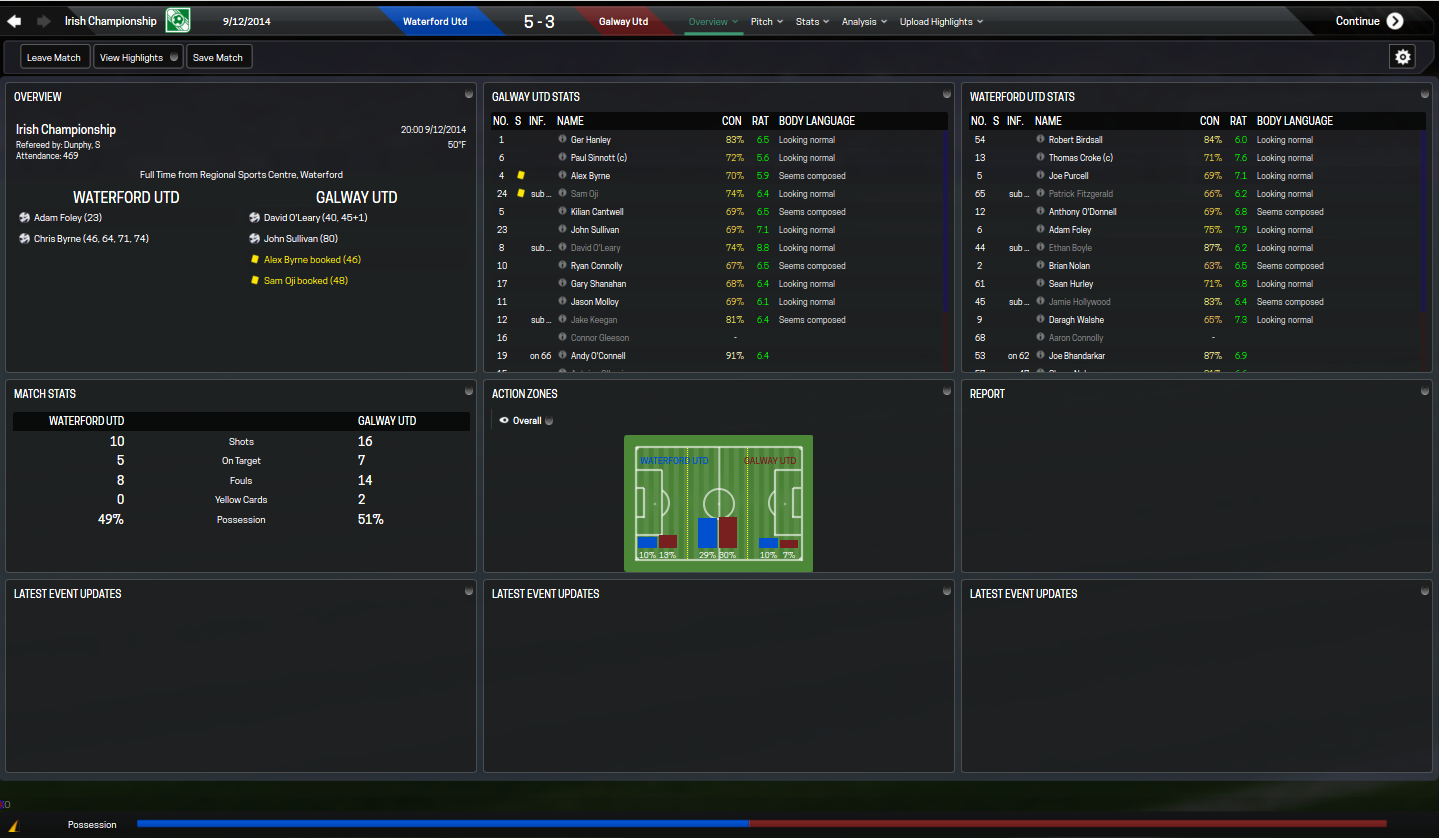 AlexTHFC
5 years
That chairman seems like a right arsehole lol.

This looks interesting, and your presentation is amazing! Keep up the good work! Shame about the poor results, but the only way is up!

This looks interesting, and your presentation is amazing! Keep up the good work! Shame about the poor results, but the only way is up!

That's what you get for being in a fan ran club haha. I am thinking this is my best writing and formats since I joined in 2013.
Login to Quote

Cappy13
5 years
Chairman seems a bit of a dick

At least you progressed in the cup
Login to Quote

No1VillaFan
5 years
I agree with the chairman being a arsehole, however, if you won matches............. haha great updates as usual man and well done for getting to the final
Login to Quote

MJK46
5 years
Cappy13 and No1VillaFan Yeah the guy is pretty bipolar. Some how after I turned things around in November (you will see soon) he gave me a two year extension. Also I hope I win this club because I think that's the only silverware I will be getting all season.
Login to Quote

November was the month everyone was waiting for as the team was able to pull a string of positive results. During this run the club went 4-1-0 and are now climbing back to the top. "I had a meeting with our president Bernie O'Connell and he pretty much set me straight. I was able to use his talk we had and turn it into a positive."-Kevin O'Leary. The month included victories over the top two teams in the league.

The FAI Cup was drawn favorably for us having to face Greystones of League 1 at home. The team dominated them and were able to pull off a very enjoyable 3-1 victory. For the 5th round we will be hosting Longford of the Premiership. The match is set for a 4 February kickoff at 7:30 PM.

The team easily rebounded this month in league play by winning three out of the four matches. The only blemish was a scoreless draw at Cobh Ramblers. The highlight matches came at the later part of the month as the team faced both the first and second place team. In the match against Waterford we were able to shut them out. For the Wexford result we battled to a 2-1 victory.

We have a new Player of the month and this time it goes to Midfielder David O'Leary. David showed an amazing work effort this month controlling the tempo for both offensive and defensive plays all month long. In the shutout against Waterford David was able to score a goal. Congratulations!

The Christmas season is here and that means a lot of activity for the club. Some of the highlights include the annual holiday food, toys and clothing drives. We will be excepting donations until 23 December at closing time. In league play the month will be extremely short with three matches. It all starts on 7 December as we host Shelbourne and the final home match of 2014 will take place on 21 December as we host Cabinteely. Club offices will be closed from Christmas Eve Until New Year's Eve. 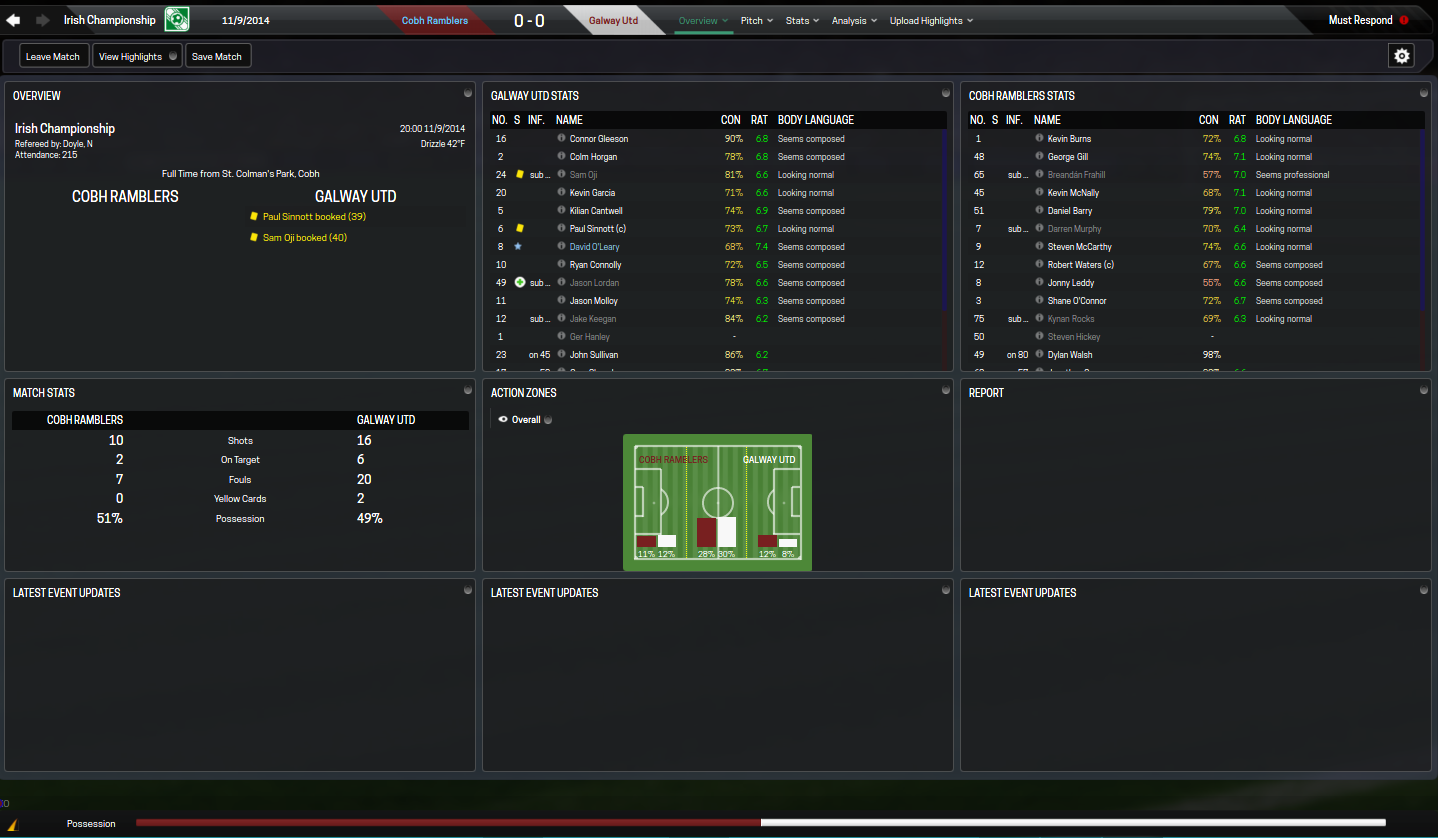 Jer
5 years
Come on, pick those results! From what I can read, the chairman is a right dick!
Login to Quote

December was a short month match wise for the club as they competed in three matches. It was a December to remember as the team continued their winning streak. In the three matches the club scored a total of two goals while shutting out all three opponents.

Despite only scoring only two goals all month the team was able to capitalize on their new found fortunes by going 2-1-0. There were really no major highlights other than a goal by 17 year old AM Jason Lordan who scored his first league goal against Finn Harps. At the end of 2014 we are now in third place trailing leaders Waterford by four points.

Jason Lordan gets the December Player of the Month award for his first ever league goal. Congrats Jason and we look forward to seeing more goals from you. Jason's goal was also the only one scored by the team in the month.

January is slated to become a very busy month for the club. The team will be facing five clubs all in league play and will not return home until the middle of the month. January also means it is the start of the Winter Transfer Window.

We all hope all fans have a very Merry Christmas and a Happy and Healthy New Year! MJK46
5 years
Starting tomorrow I won't be around much for about a week as I will be out of town so don't panic when you see there hasn't been an update. I might have time to post one or two all week but that's about it.
Login to Quote

TheLuckOfTheIrish
5 years
After being away for a while I've finally had a chance to catch up on this story, and its turning into a good one! However, its even better to see Waterford flying ahead at the top of the league, considering they're the team I support back home where I'm from in Ireland. Good Luck with the story anyways.
Login to Quote

Feliks
5 years
I like how you use spoilers, very effective
Login to Quote