Cesena have announced that they have completed the transfer of Spanish U19 captain, Jesus Vallejo, from Zaragoza. The young centre-back was under intense speculation of moving away from Zaragoza as both A.C. Milan and Atletico had bids accepted by the Spanish club. However, it was Cesena who got to sign their man as they stole the march ahead of two of the biggest clubs in the world.

It was a rare scenario in which a youngster accepts to a lower club in order to succeed and not be loaned out, which has been the case here with Jesus Vallejo. The youngster had a release clause of £1,100,000 million in which all three clubs activated and were in constant contact with Vallejo's agent and the man himself. It is widely believed that Vallejo's agent along with Bisoli, were the ultimate factors that led to the 18 year-old moving to Cesena, rejecting moves from other talented managers like Simeone and Prandelli, from Atletico and Milan respectively. 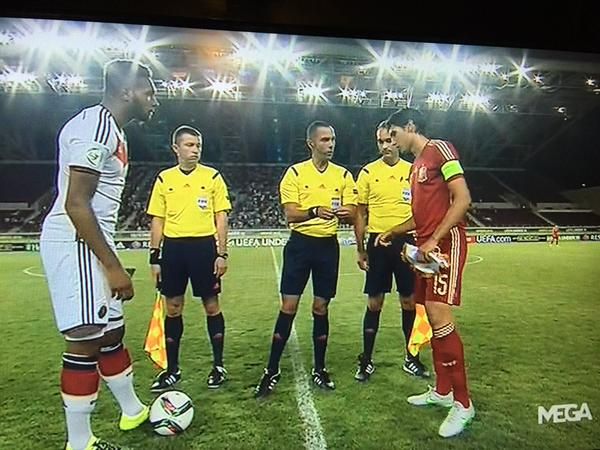 The young centre-back leading the U19 Spain team

They youngster will earn around £280,000 per year prior to bonus, although it is stipulated in his contract that his wage will increase once he reaches a number of league games, something he is expected to do by the end of the season. Cesena, under legal obligation revealed that Vallejo's release clause was £10,750,000 something that the player insisted in putting in his contract, something that might back-fire the club in the future.
Login to Quote

Keep up the good work!
Login to Quote

Jer
7 years
@Tango: Thank you, he has great potential and should slot in right the first XI!
Login to Quote


Following a disappointing end to January, Bisoli had to face the likes of Palermo, Napoli, Udinese and Sassuolo in the Serie A, whilst facing Roma in the Coppa Italia quarter-final. walkinshaw
7 years
You've had some great results to start and overall a very productive month.
Login to Quote

Thayre991
7 years
I don't know much about Italian football but I know enough to know Cesena weren't too good a side. So for you to have done this in your first season is quite good. Keep it up.

mo_123
7 years
Some good results especially the one against Roma.
Login to Quote

Jer
7 years
@Walkinshaw: It was a decent month, yes

@Feliks: It was a last minute goal, too!
@Thayre: Season isn't done yet mate.
@Mo: Thank you, that has been the highlight of the month, definitely.
Login to Quote


Following their heroics against Roma in the Coppa Italia, Cesena fans have been anxiously waiting to see their heroes play at the Dino Manuzzi this month in their first semi-final leg, as they bid to go ahead into the final. Bisoli will also lead his troops against Sampdoria, Hellas Verona, Lazio and Torino. 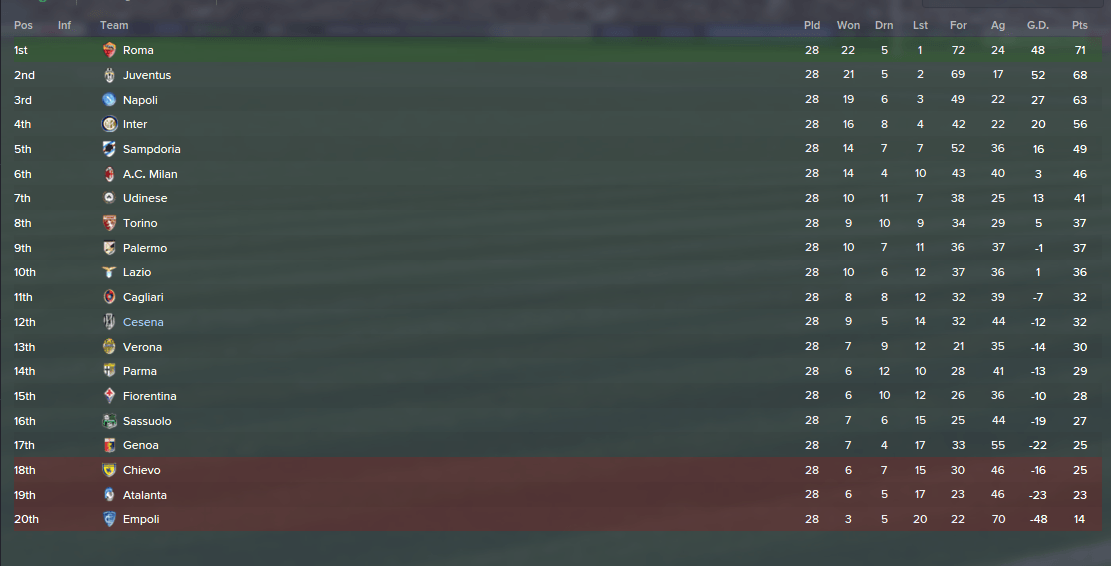 Welshy
7 years
You're looking a lot more comfortable at the moment, great result at Napoli too!
Login to Quote

Jack
7 years
Some classy performances, 4-1 against Sampdoria is good going!
Login to Quote

Jer
7 years
@Welshy: Indeed, the players are getting used to playing into my tactics, even if it's kind of late into the season

@Jack: They thrashed us 5-0 last time out, so I called on the players to do the same :)
Login to Quote


Cesena have announced the signings of eight youth candidates, whom all had been on trial. This has proven to be a great year for the inductees as 50% of the youngsters were given youth contracts until 2017. All of these players have impressed Bisoli who attended the match, in their 2-1 win against the U18 side, something that will have disappointed Bisoli as these players only had a few days of training, whilst the U18 are in the last-stretch of the season.

Marco Pacini is the latest talented striker to come out of the club's youth academy, joining the likes of Tomassini and Moncini.

All of these players are expected to pen the same deal, of £10,000 a year as all of them are thought in the same level of talent. In addition to this, they are all expected to slot into as reinforcements to the U18 squad, and within time, be able to make the jump into the U20 side, and into the main squad.

Marin Pusic is thought to be the crown-jewel of the intake this year, along with Marco Pacini

P.S.: If you want the rest of the players ss, don't be afraid and ask.
Login to Quote

Bisoli: Vallejo injury can cost us


Pierpaolo Bisoli, on his way to the training ground, heard the news that new-signing Jesus Vallejo had been injured on international duty as he captained Spain U19 against Czech Republic's own U19's. The youngster is highly regarded at Dino Manuzzi, and had been playing consistently ever since his arrival from Zaragoza during deadline day. He displaced loanee Massimo Volta to form a solid partnership with Luka Krajnc, and even had registered two goals showing his understanding with his new team-mates. Now, with the last matches coming in for Cesena, they will be unable to count the young Spanish centre-back for those games, including the crucial and first ever Coppa Italia.

As the reporters swarmed Bisoli, one let out the news about Vallejo, to Bisoli responding,&amp;quot;It's ridiculous. We bought him for the first-team, where he has been playing and it's a massive blow for the team not to have him available. Spain have a great depth of talent pouring in their U19, and Luis de la Fuente should not have called him up, as he knows we are playing our last matches of the season. Totally unacceptable.

It is unknown to how Luis de la Fuente will take the news of Bisoli blasting his methods.
Login to Quote