Hey guys! Hope you're all having a wonderful christmas! I've been away for a long time away from Fmscout, and I've decided I should try my hand once again at story writing. I've been over in the United States playing college soccer so now I'm back in Ireland I've got a bit to time to dabble with.
I've been testing out fm16 with quiet a few teams, and to be honest I find it very difficult, especially with teams that would battle it out for relegation in the premier league. However with myself writing a story on my save, I hope it will inspire my results and help me enjoy the save even more!

I'm going to do a save with Aston Villa, who obviously have been struggling immensely this season and will more than likely go down. They have a very young team and I'm guessing not a great budget so we'll see how I can do. I will be continuing as Remi Garde, so stay tuned and enjoy! Griffo
5 years
Another Aston Villa story on here, I am looking forward to it!
Login to Quote

Man0war
5 years
As a Villa fan myself, I'm looking forward to seeing how this pans out. Please answer the prayers of all of us fans and use Kozak as much as you can.
Login to Quote Remi Garde has insisted that Aston Villa's current squad is strong enough to survive in the Premier League, and has ruled out any kind of transfer activity from the club.

Remi Garde met the press today for the first time since being appointed Aston Villa manager, and was alongside chairman Randy Lerner. The former Lyon boss was Villa's first choice manager, and he hopes to repay the confidence the club has shown in him.

It's an honour for me to manage such a big team like Aston Villa. I'd like to thank Randy (Lerner) for his confidence in me. I hope I can give the fans what they deserve, and that is Aston Villa succeeding again both in the league and cup competitions

Aston Villa struggled very much so last season, finishing 17th, just 3 points above the relegation zone. They conceded a large amount of goals and were the leagues second lowest scorers. However Remi Garde is confident that these same players can succeed this season, and sees no need for any transfer activity.

"I think I have the give the players a chance. I have to fill them with confidence. It would look very bad for me to come in, without seeing them train and then try to replace them with other players. I believe we have a young squad filled with talent, it's only a matter of time before we click and succeed"

Aston Villa face a daunting start to their league campaign, with their first three games coming against Chelsea, Manchester City and then Liverpool
Login to Quote Eden Hazard opens the scoring for the champions

Chelsea were quick to fire out of the blocks, with Eden Hazard finding the back of the net with just 5 minutes on the clock. Remi Garde opted to counter Chelsea's attacking threats by playing 5 at the back, but the Belgian maestro easily skipped past Micah Richards before slotting the ball calmly low past a helpless Brad Guzan.

Villa were on the back foot from the get go and lone striker Andre Ayew was starved of any service in the early stages. Chelesea doubled their lead on 34 minutes when a clumsy challenge by Lescott on Hazard gave the Belgian a chance from the penalty spot. He once again slotted it away with ease.

The second half saw Jose Mourinho instruct his side to keep the ball, as Chelsea controlled possession while Villa haplessly ran trying to get a touch of the ball. Willian finished the rout with a magnificant curling effort on 75 minutes, much to the appreciation of the home support.

The defeat crushes some of the optimism the Villa fans had with Remi Garde's appointment, with more tough times ahead as the Villians host Manchester City next before travelling to Anfield to face Liverpool.
Login to Quote 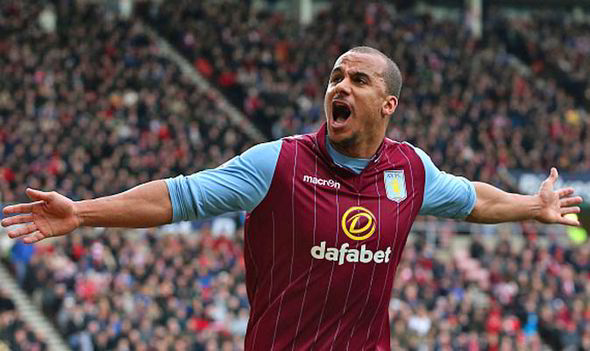 Aston Villa fans will be leaving Villa Park thinking what may have been after throwing away a 2-0 lead to Manchester city this evening. After a 3-0 drubbing at Stamford Bridge, Remi Garde must have been looking for a reaction from his players. Whatever he said must certainly have left it's mark as Gabby Agbonlahor beat the offside trap and slotted past Joe Hart within the first minute.

Villa park was rocking and the home side were looking comfortable, passing well in the midfield. Remi Garde had changed to a more traditional 4-4-2 for this game, and it seemed to be working a treat.

The villa fans couldn't believe their eyes when Jack Grealish's freekick was met with the head of Agbonlahor, out of the reach of the outstretched Hart and into the back of the net.

However the two goal cushion did not last until half time as a David Silva corner caused havoc in the Villians penalty area, before Vincent Kompany scrambled the ball over the line to reduce the deficit in half.

The second half was a cagey affair, as City looked for the equalizer, they began playing in a more direct manor. The introduction of Raheem Sterling showed the intent of the City boss, as they began to push forward.

The resulting pressure did eventually show as a fantastic piece of vision from Pablo Zabaleta who cut the ball back to the edge of the penalty area, where Fernandinho hit a first time strike perfectly into the top corner. The citizens had pulled the game back from the death on the 79th minute, and that's how it'd finish.

Remi Garde must be happy with the improvement in performance, but will be worried about his side throwing away a two goal lead. On the other hand, Manchester City will be looking into what happened today, with today's performance not going to worry any of their title challengers at the top.
Login to Quote

Nick_H
5 years
Extremely good result, though it must be heart-breaking being 2-0 up to City to then be pegged back, positives are that the confidence will be high after a point to them I guess!
Login to Quote

No1VillaFan
5 years
awesome!!! I will follow, i love a good villa story

http://www.fmscout.com/q-15325-Villa-From-The-Dumps-To-Brink-Of-Greatness.html this is my villa story also, hope u like it
Login to Quote

FormIsntAll
5 years
Good luck with the save, and good job on the writing so far.
Login to Quote

Griffo
5 years
Decent start all things considering, will be interesting to see how you go against the smaller sides.
Login to Quote

DeanByrne1995
5 years
@Nick_H - Yeah it was a good result but a very frustrating one all the same!

@NO1VillaFan - I'll definitely be following your story mate, it's a quality one!

@Griffo - Hoping we can push on!
Login to Quote Liverpool, who were coming off the back of a 1-0 win at Sunderland were expected to continue Remi Garde's streak without a win as the Reds entertained Villa at Anfield. The atmosphere was quiet subdued before kickoff, with the the main talking point that former Villa striker Christian Benteke would start against his former employers.

It was Benteke that would have the best chance of the opening 45 minutes, a clever reverse pass by Jordan Henderson found the Belgian behind Aston Villa's defence, however he could not take full advantage, scuffing his shot into the side netting, much to the delight of the travelling fans.

It took until the 58th minute before Villa registered any attack of note, with a long ball played by Alan Hutton finding substitute Jordan Ayew. The Ghanaian taking the ball down on his chest before turning Martin Skrtel and eventually firing just over.

The Villians were defending resolutely, but there was nothing they could do to stop a moment of magic on 80 minutes. Phillipe Coutinho picked up the ball just inside the villa half, before deciding to go alone. Villa defenders were more focused on the potential passes as the Brazilian danced past several tackles before curling a beautiful effort into the corner of the net.

Villa had one or two half chances but the full time whistle sounded with the Kop cheering for Jurgen Klopp once again. Liverpool look to continue their recent form when they travel to White Hart Lane next week, while struggling Aston Villa will look to bounce back with a home encounter against Sunderland
Login to Quote

Capital One Cup Round 1 Draw Aston Villa will travel to Deepdale for the first round

Aston Villa will face Championship Preston in the first round of the Captial One Cup.

Remi Garde's men will face a tough task, with Preston so far impressing in the Championship lying in 5th position. It may be seen as rest bite from Premier League action as Aston Villa have so far only managed 1 point in their first 3 games under their new French manager.

A cup run is what all fans dream of, and Aston Villa experienced that last season, losing out to Arsenal in the FA Cup final. Expectations for both clubs in the Capital One Cup will be to surpass this round at least, however for Remi Garde he will want to secure his first win as Villa boss to ease any early pressure that may be around the corner.
Login to Quote

You are reading "Remi Garde - The Villian".