Jamie Carragher was told if he was beaten by Chelsea he would be sacked, Jamie had other ideas in a 2-1 win with Wilfred Bony grabbing both goals, Jamie's £10 Million signing payed off but unfortunately he was injured late on in the game and would miss the game against Watford. Liverpool fought and fought on that day but couldnt score, with Ings up top as Sturridge and Bony both out injured the reds suffered a 2-0 loss.

Bony was back for the cup tie agasint Sunderland where he grabbed another goal along with Coutinho to help Liverpool secure a place in the F.A Cup semi finales where they will meet stoke at Wembley.
Liverpool then took two draws against City and Everton Barbosa coming of the bench to rescue a point for the red half of Merseyside.Barbosa then started the next game agasint Villa and grabbed two more goals helping secure all 3 points at Anfield.
Login to Quote

Liverpool started off this run of games very poor with a 4-0 hammering by Tottenham, Liverpool where all over the place and couldnt keep the ball under control.Daniel Sturridge returned for the next game after his 3rd injury of the season he scored 2 along with a goal from Coutinho Liverpool secured all 3 points.

Sturridge will now go on too miss the rest of the season with another knee injury.and Liverpool looked like they could do with out it as they failed to find the net once again in a 1-0 loss to an early Jay Rodriguez goal for Southampton.

The last game of the run would be hosted at Wembley between Liverpool and Stoke to decide who would be returning to face Southampton in the finale. Stoke have been in this situation before where they played Bolton Wanderers and gave them a 5-0 smashing being 4-0 up at Half Time. Liverpool have won a trophy at Wembley before beating Cardiff 3-2 on penalty's and it looked like this tie was heading there aswell after Danny Ings fired Liverpool ahead in 2 minutes, Joselu made it 1-1. Roberto Firmino made it 2-1 with a well struck shot from the edge of the area before Bojan then equalised once again. The match was pretty even all the way through. 72 minutes in to the game Bonys replacement Barbosa led a Liverpool attack playing a lovely one-two with Ings, Barbosa was clean through but couldnt hit the target. The game went to extra time and was on the way to penalties put with 5 minuets left on the clock Barbosa looked for Ings in the box with a brilliant ball but the ball was cleared as far as Moreno on the edge of there area with a thunderous volley he made it 3-2 and put Liverpool in the final.
Login to Quote


END OF THE SEASON

The last 3 games of the season could of gone better for Liverpool only picking up 4 points from a possible 9.
They started with a 0-0 draw against Norwich once again struggling to find the back of the net with out Sturridge.
It got worse for Liverpool when they went away to Leicester and where beaten 1-0 by a bullet head from Robert Huth. Things picked up for Liverpool on the last day of the season as they beat Bournemouth 2-0 with goals from Firmino and Can.

Daniel Sturridge has been given the all clear to play in todays game at Wembley between Liverpool and Southampton, Ryan Shawcross is cup tied and Adam Lallana and Bony out injured so this is how Liverpool will line up. Southampton who finished in 16th just 7 points clear will hope to get one over on Liverpool as they did just over a month ago in a 1-0 win Jay Rodriquez getting the goal he starts today on the wing. 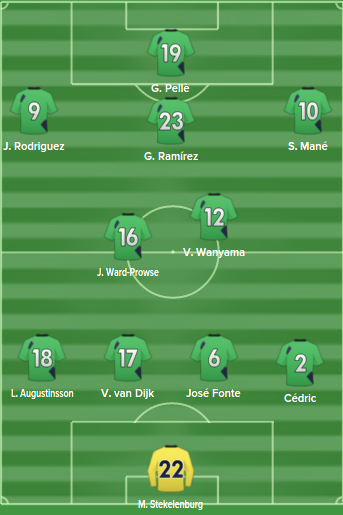 Southampton dominate the early stages of play with some great passing movement between them but 20 minutes in and they haven't had a single shot on target.

Mane takes the ball past Moreno and whips in a beautiful ball to Pelle who gets there... straight in to the hands of Mignolet. Mignolet with a long ball upfield Ings heads it down to Christante who plays out wide to Moreno great run down the line and whips it in over everyone and to Clyne, Clyne back in DANNY INGS... brought down its a penalty to Liverpool.

Firmino steps up he looks confident...FIRMINO...

great save and and the ball Iis cleared what a chance to make it 1-0 but Firmino just couldnt produce.

Emre Can with the ball now lofts it over the top to Ings header down to Firmino who slots it through to the run of STURRIDGE... its 1-0 what a goal for Liverpool brilliant build up play and the finale ball through to Sturridge was weighted and placed perfectly.

The second half begins with Liverpool on top since that Sturridge goal they have been on fire and they have another chance here with Sturridge leading the line beats his man and plays a ball across to Ings on the edge of the area DANNY INGS... off the bar so unlucky for Ings there.

70 minutes in now and still no sign off another goal to come with Sturridge on the ball... he looses the ball and Southampton break with Mane great run down the wing across comes Skrtel what a tackle, Skrtel finds Can turns and beats Wanyama plays across to Ings... ball over the Southampton defence, Sturridge gets there... STURRIDGE... 2-0 Liverpool what a goal! and with 15 minuets to go.

Last 5 minutes now and still 2-0 Liverpool, Southampton on the attack, Mane ball in Tadic gets there and 2-1 but surly that is it, the cup must be Liverpools!

Today Liverpool chairman Thomas Werner has announced that he has offered current manager Jamie Carragher a new contract and that the contract has been signed. He has stated that Jamie is happy at Liverpool and wants to keep working at the club.

Werner has also announced there has been alot of money pumped in to Liverpool to help Jamie succeed,
£5million of the money has been spent on new training facilities and more money has been placed in Liverpool's youth recruitment.

Werner has stated that all though Liverpool did not qualify for Champions they have faith in Jamie to take them there this season.
Login to Quote

Liverpool have started to pump alot of money in to there youth squads, after they have paid money to upgrade there facilities they have signed 3 new staff members to help coach the youth.

Joe Cole was the 1st to be added to the new coaching team, Cole has endured a fantastic playing career making 430 appearances, his career started at West Ham before Cole moved to Chelsea along with Frank Lampard, Cole then moved on to play for Liverpool for 2 seasons he spent the last few years of his career dotting around clubs.

Kolo Toure has hung up his boots and joined the new coaching team another player who endured a successful English career starting off at Arsenal before moving to Manchester City for £14 million where he stayed for 4 seasons before moving to Liverpool on a free. Kolo Toure has made 339 League appearances altogether for all 3 clubs scoring 11 goals.

David Dunn joined next, Dunne spent most of his career at Blackburn but has had spells at Birmingham and finished up at Oldham before joining Liverpool coaching team. He made 395 appearances altogether scoring 61 goals.
Login to Quote

Liverpool have today confirmed there stadium expansion is complete. Anfield was built in 1884, the stadium now has a capacity of 54,000 the stadium expansion was announced shortly after Liverpool won the 2015 F.A Cup against Southampton.Liverpool who have applied on a few occasions for planning permission have finally had it granted.
Login to Quote