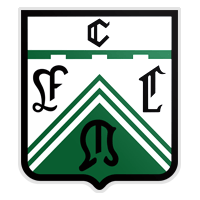 In the middle of Argentina, a club has hired a manager. People don't really care - except in scatters of Buenos Aires, where fans of the club Ferro have been a bit sceptical about the appointment of new manager Lewie Roberts. He's a Welsh manager from Cardiff, whose track history is leading Liverpool to consistent success...

Ferrow are currently 3rd with just over half a season gone. They are on 44 points, with 1st and 2nd on 45 points, and 4th on 39 points. In this league, the winner of the league goes up, and 2nd - 5th goes into a playoff to go up. Relegation is based on Average Points, not position, and Ferro are currently 12th out of 22 in there 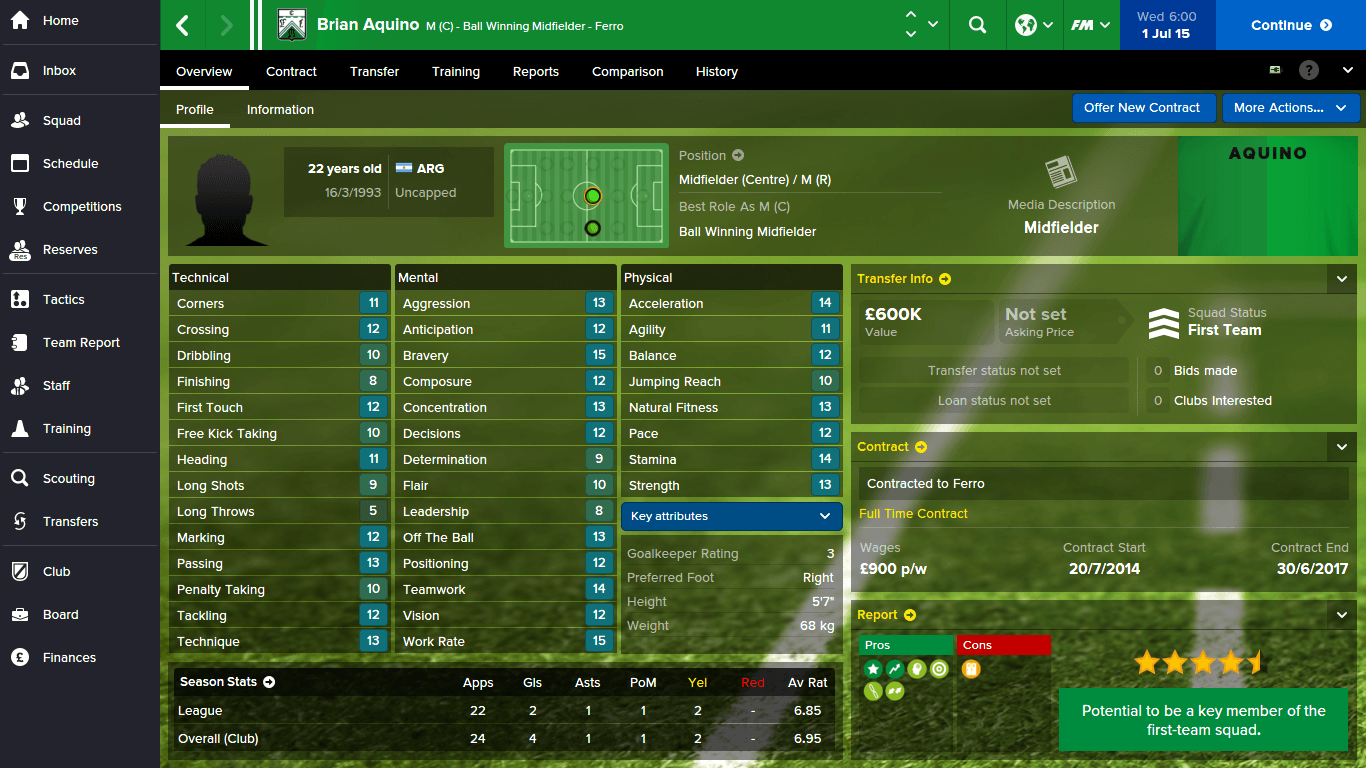 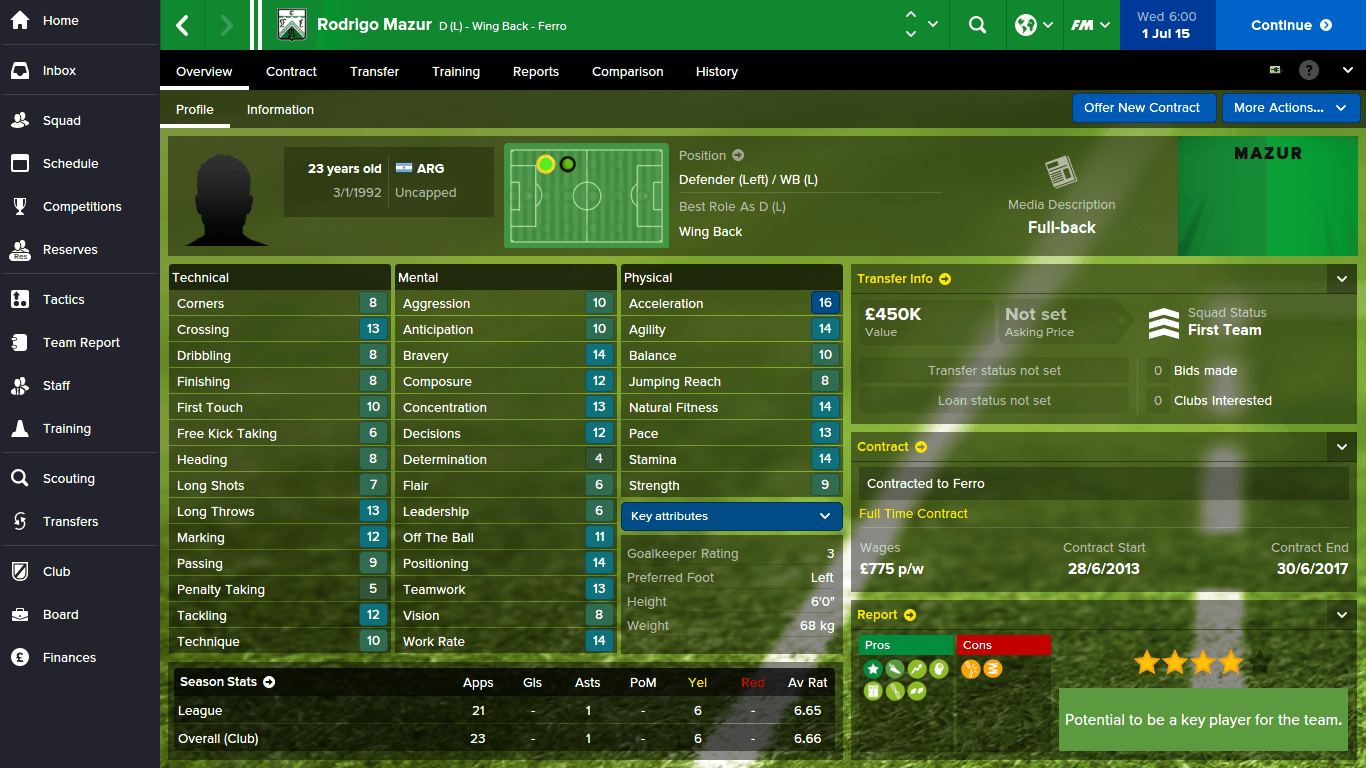 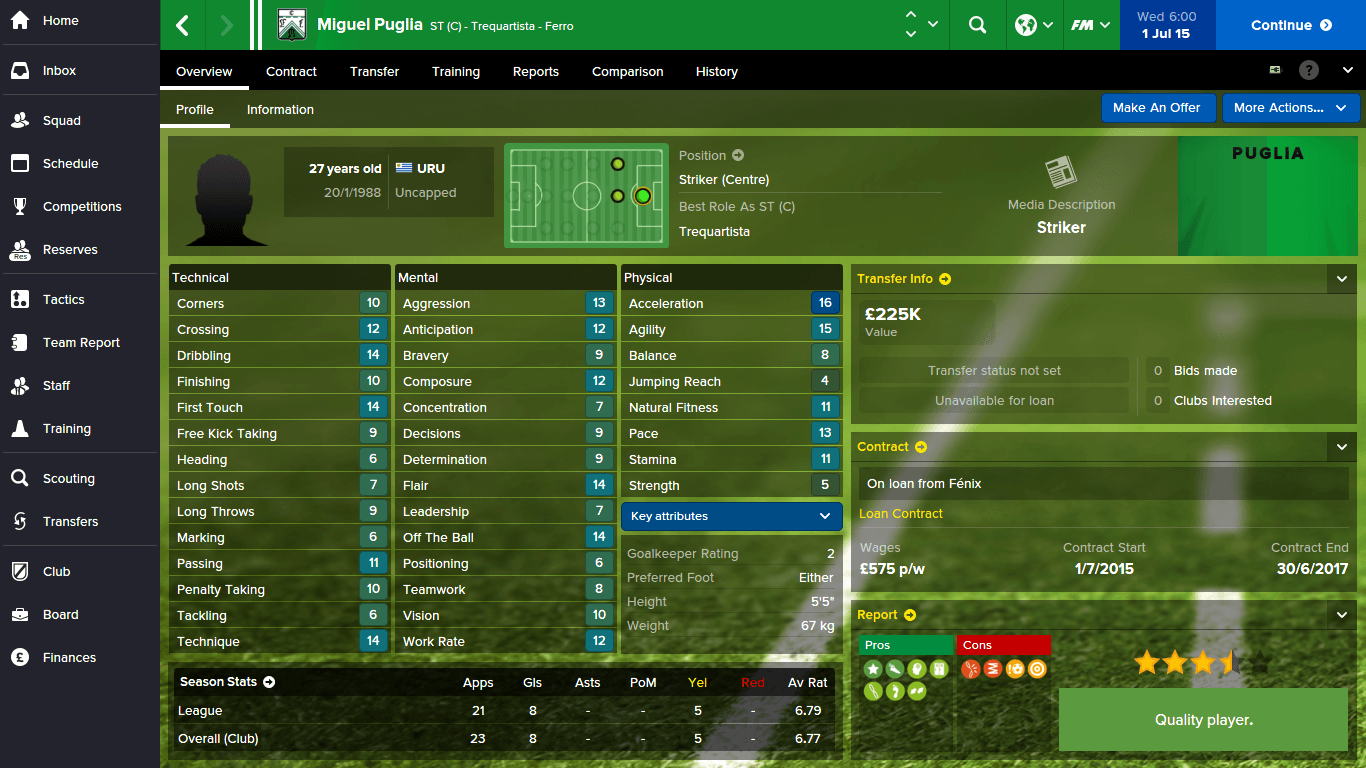 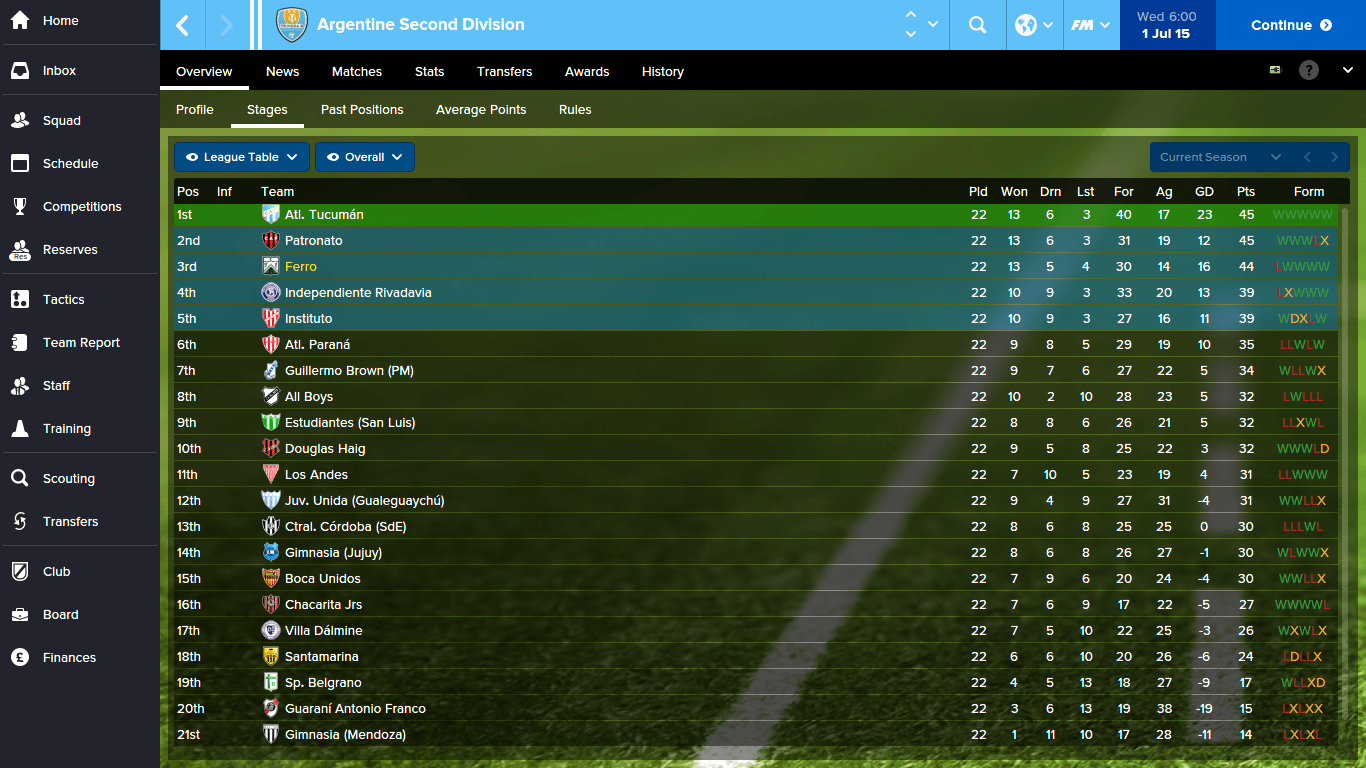 lewie100
5 years
Justice + InfraRed + OlleM13: Thanks guys! This is actually my 1st ever save managing this low in the depths of football, so I hope this turns out decent...
Login to Quote 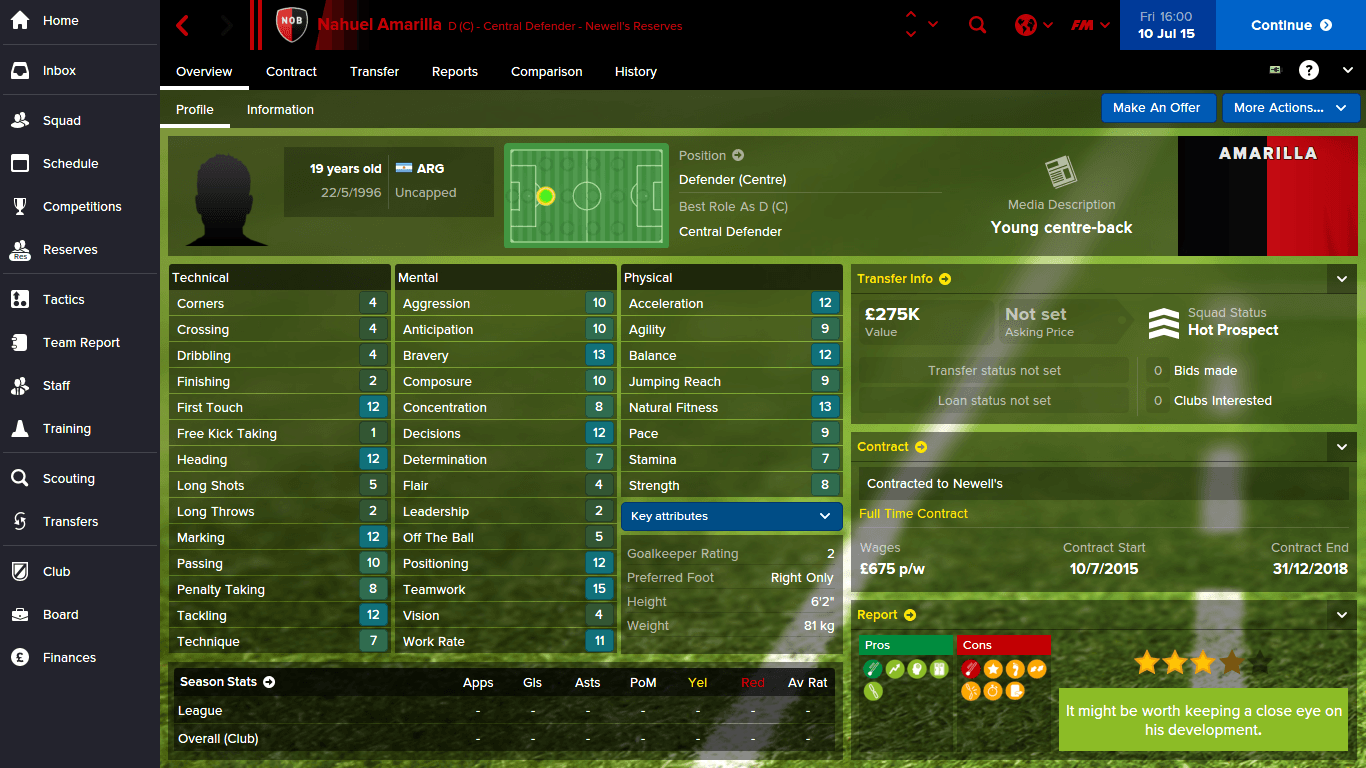 Quite gutted to see this guy go, he had decent potential (3.5*) but to get a reasonable amount for an 6th choice CB ATM (£66k) is very good I'd like to think.
Login to Quote

This was a bit of a poor month, with a very disappointing start, but it got better at the end when I recorded my 1st victory!

A look ahead at August

A busy month as we compete in 5 league games and a Copa Argentina 7th Round clash with fellow 2nd Division side Ctral. Córtoba (SdE) 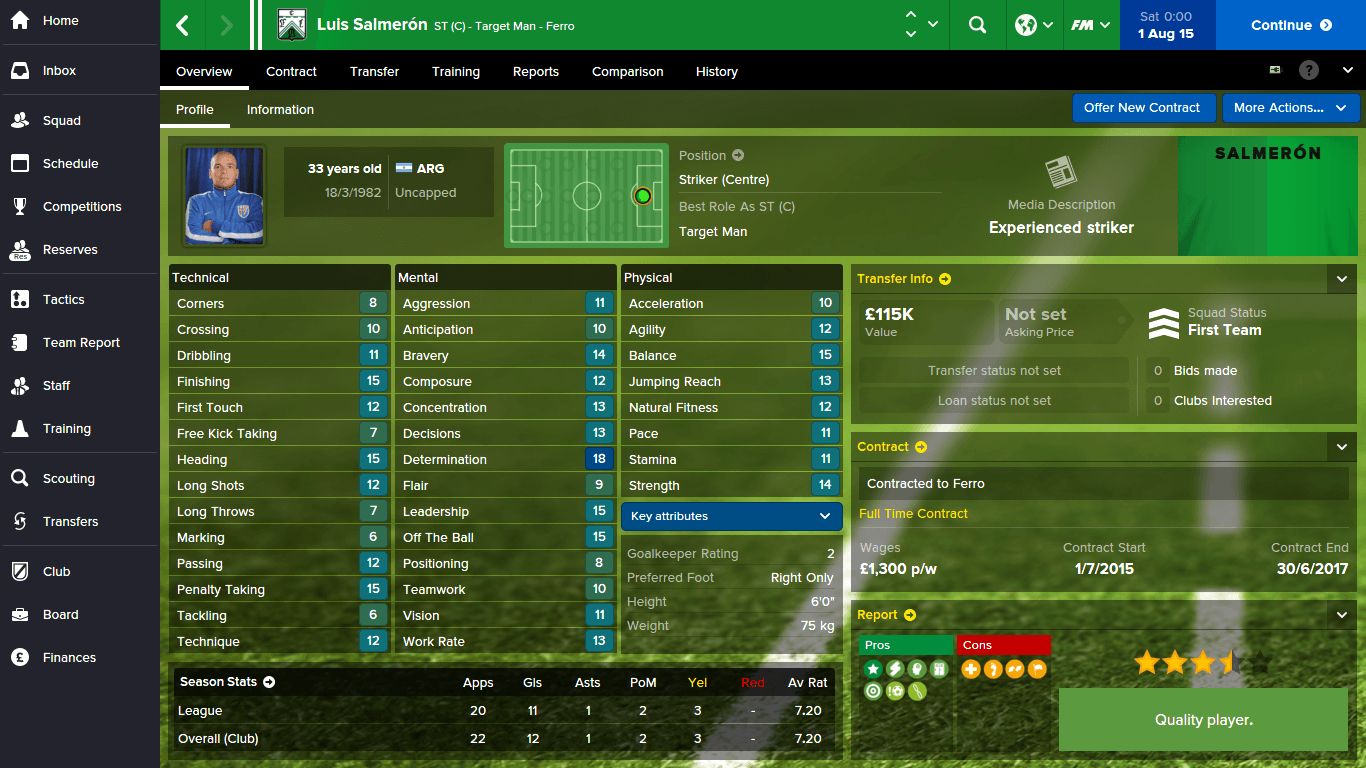 The Pepe lookalike has been decent, scoring 2 goals in what has been a disappointing month. 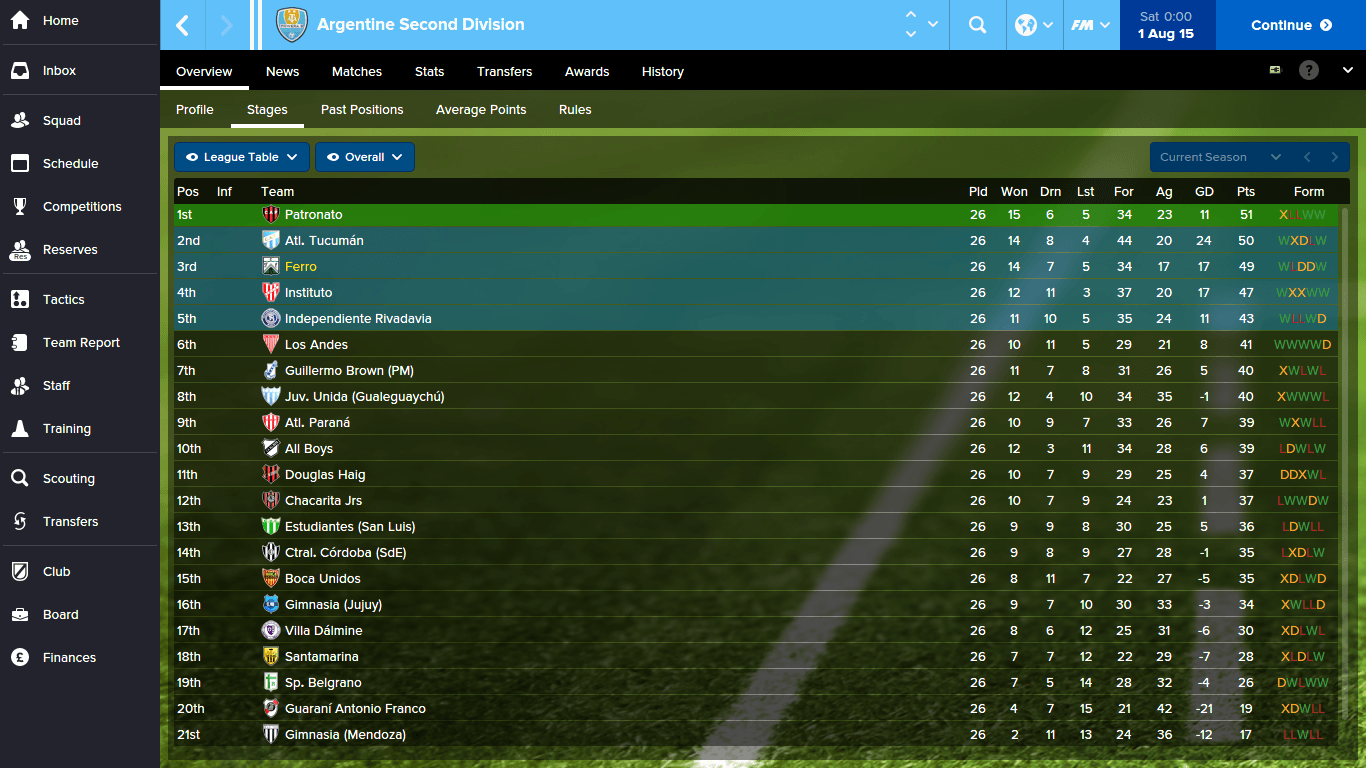 Live For FM
5 years
great start man.. and like the skin

C.J.Lippo
5 years
Well, at least you got your first win! Onto bigger & better things...... Hopefully

lewie100
5 years
Justice: Indeed there is! 16 games to prove our title hopes, though we're only expected to get Playoffs, and that's my target.

SooruSooru: Thanks! The skin is the FM Touch Retro skin.

C.J. Lippo: Yeah, I hope I can move to better things!
Login to Quote 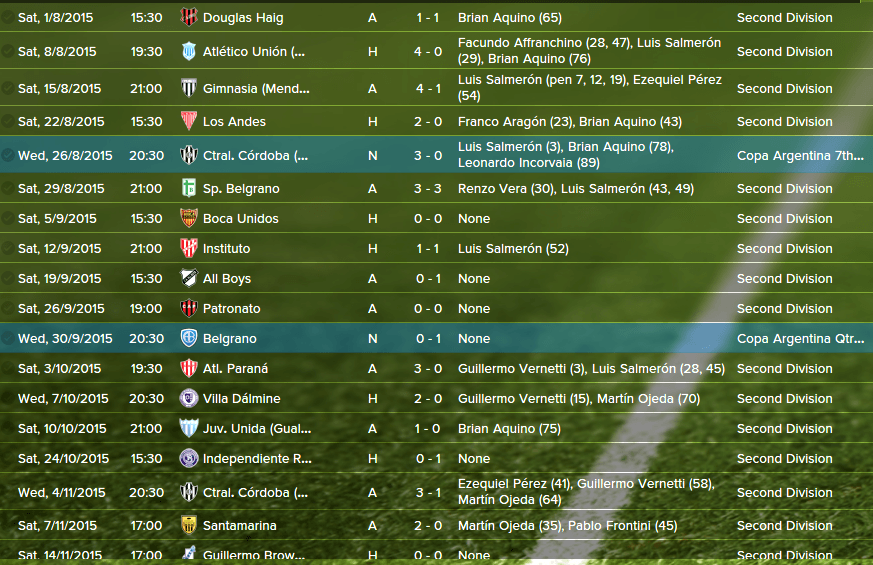 This league was tough, I have to admit. Dropped points everywhere, but did we fall down the table? No! We actually went up to 2nd! That is a surprise, even to me.

WE DID IT! WE ARE GOING UP WITH THE BIG BOYS! A pretty tight Semi Final saw us come out 2-1 winners on Agg. The final was different. We got badly beaten 3-1 in the 1st leg, I thought we had no chance. But then, our team put up the performance of the season to smash Gimnasia (Jujuy) 4-0!

We managed to make it to the Quarter Finals, where we lost to a penalty from the losing finalists Belgrano. We were only expected to reach the 6th round, so to reach the Quarters is unexpected! 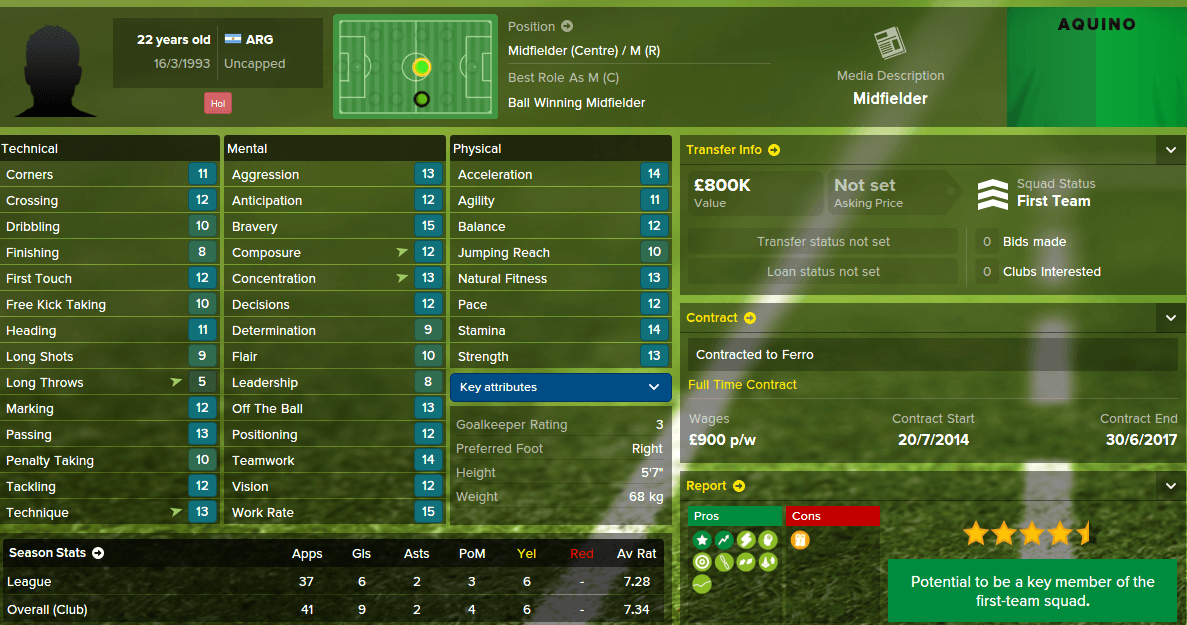 This guy was very promising, starring in a CM role and becoming a first teamer. With the potential to grow into a great player, he will hopefully either stay with us, or move on with big-money rewards for us.
Login to Quote

YazanBlueLions
5 years
Great Update. And you smashed them in the second leg.
Hopefully you can qualify to the Copa Libertados
Login to Quote 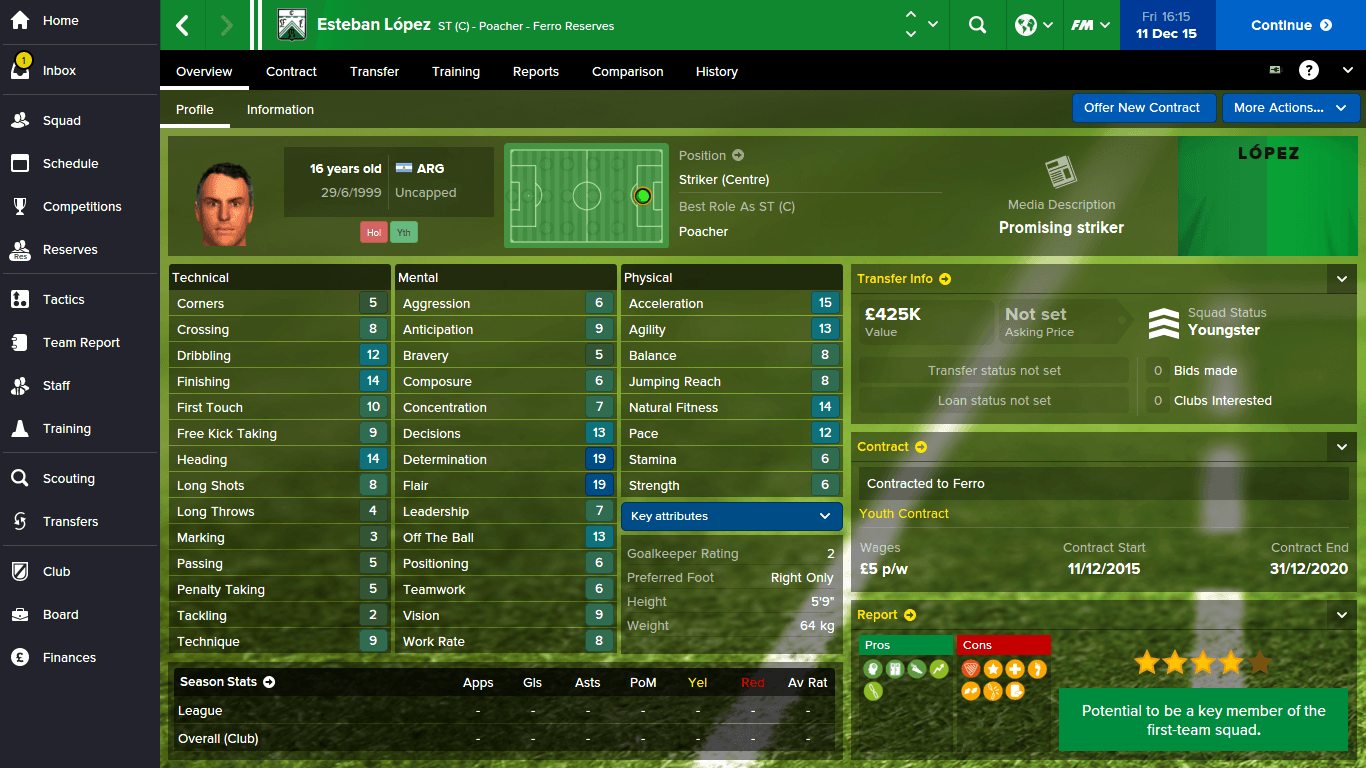 This kid is the future of Argentina. Incredible determination, a tendency to show off and the fact that he can already compete with lower 2nd Division teams is brilliant! The future, trust me. 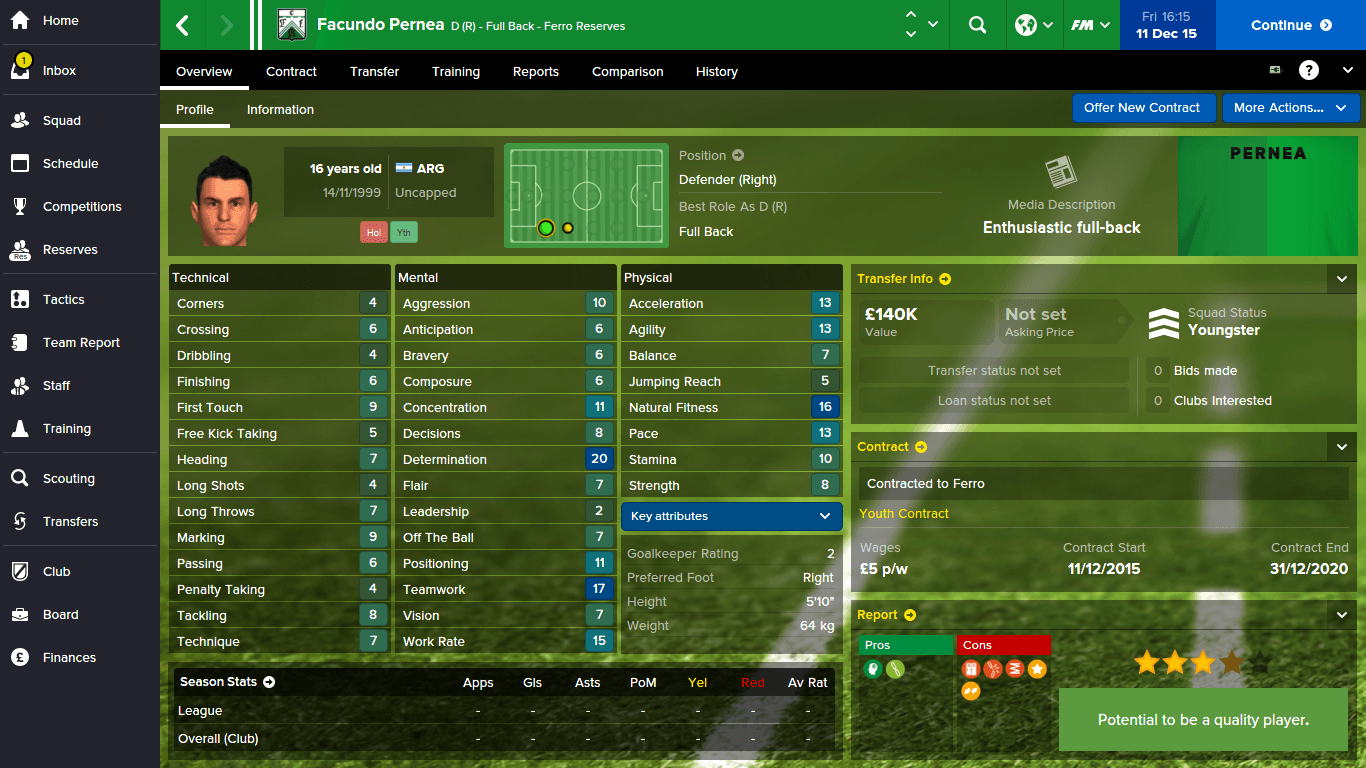 A RB who is the most determined professional I have seen! He wants to shine so bad, he'd give anything to do it, and he will supply his team-mates well with his teamwork, and the fact that he has some very good natural fitness is great! 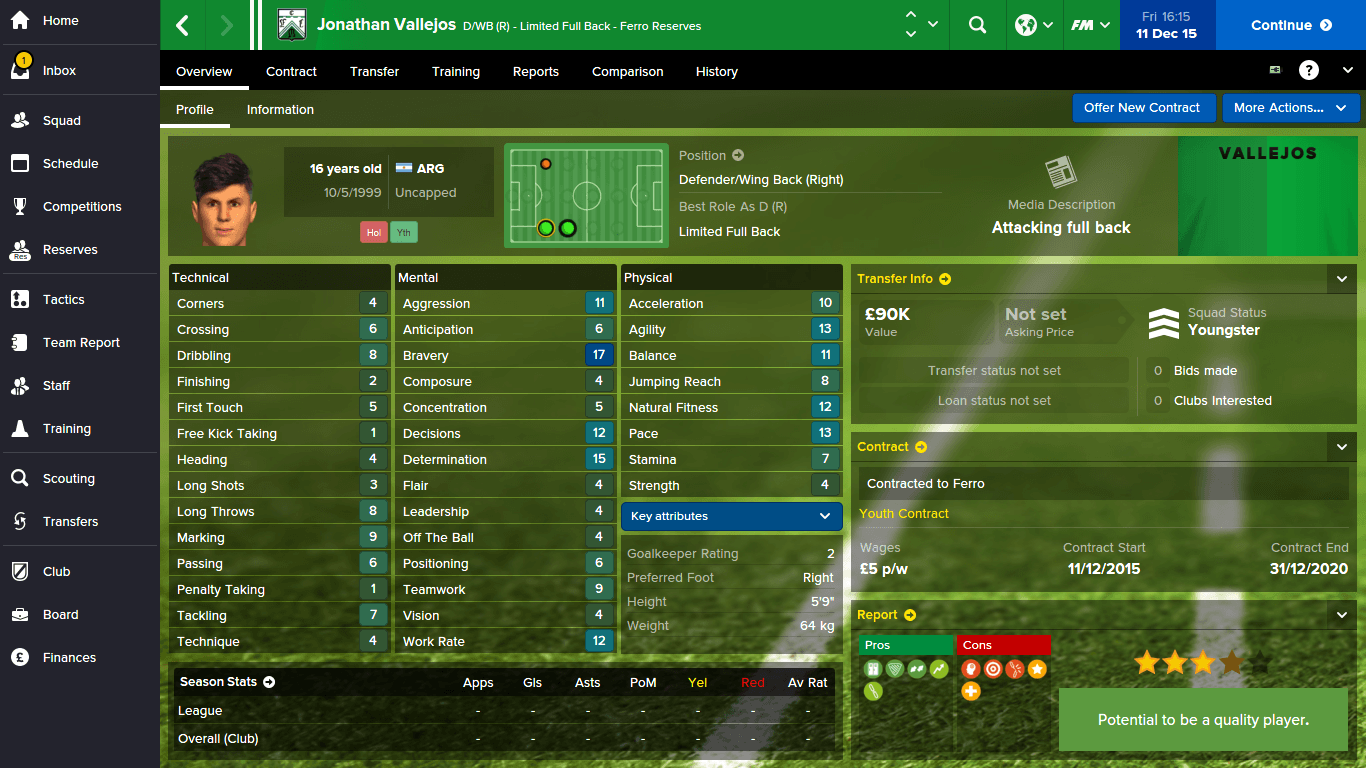 Another good RB? Preferably would have wanted another position. This guy is slightly worse than Vallejos, but he will stand in the way of anything due to his bravery.
Login to Quote

You are reading "To The Edge And Back - A Pentagon Challenge".