MJK46
4 years
Keep up the work, Europe will be calling soon
Login to Quote

My steam just randomly closed down, closing FM with it. When I loaded back up, it had been placed between the 2 Libertadores games, so I will delete the last update and put it here.

Loss on Pens is devastating, a huge blow this is. GAH.
Login to Quote

ScottT
4 years
Unlucky, though Pachuca are no push over, so you can be happy with getting to a shootout I suppose!
Login to Quote

Griffo
4 years
I really like your squad reviews, great stuff!
Login to Quote

Justice
4 years
Unlucky to lose out on penalties, hopefully you can make up for it in other competitions!
Login to Quote

I am really considering leaving now. No form in the league, out of the Cup and the Libertadores, I fear we may be going backwards. Only problem is that I wouldn't get a job as good as this IMO. Decisions, decisions...

Any pics you would like, just ask! Also, a huge thanks to whoever nominated me for SotM! A pleasure and surprise to be nominated at all! Good luck to the others, but I'm going for this. 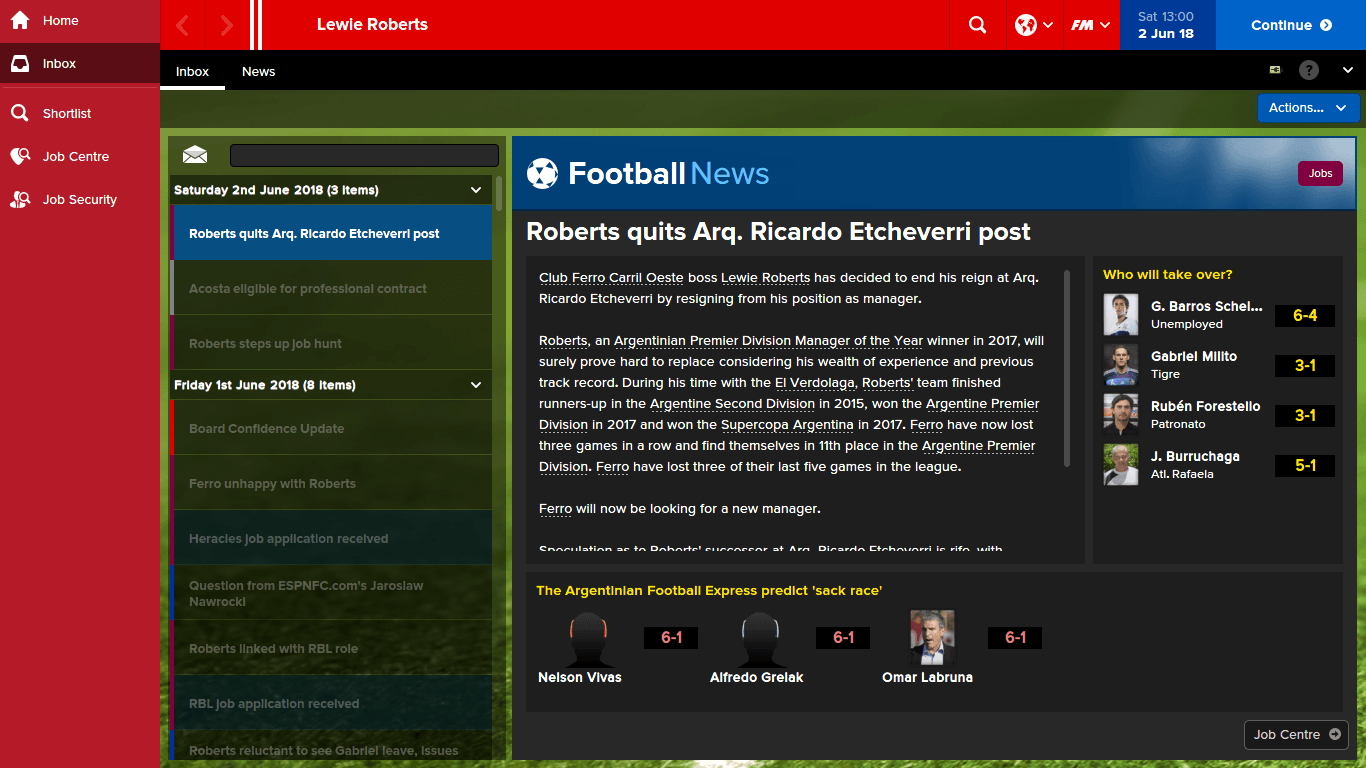 I've quit. I saw job opportunities which were better, and I felt compo may have been a big difference. If you read carefully, you can see the jobs I went for.

Justice
4 years
On for bigger and better things, you certainly left Ferro in a better place!
Login to Quote

ScottT
4 years
The legacy is over, hopefully you can land one of the jobs you went for as it would be a real upgrade.
Login to Quote

lewie100
4 years
Thanks a lot everyone! Comments mean a lot for me, and your support keeps me going! When the SotM poll ends, it would have been 1 month to the day I started this.

Where Next for Lewie?


When Lewie resigned from the Ferro job, rumors had started to accumulate about where next he was to go. One of the favourites was RB Leipzig. The Bundesliga team just about got relegated by just Goal Difference, but the board saw fit to sack manager Stale Solbakken anyway. Their key players include Mexican international Raúl Jiménez and Senegal player Moussa Konaté. Lewie has a great chance of going there, since they would suit his management style very well. Odds back him at 7/4.

Another team could be Heracles. In what was a pretty shocking sacking, Heracles only just lost out to FC Groningen by 2 points, then lost the playoff to go down. After only coming up the season before, the sacking came as a bit of a shock. Their best player is 26 year old CM/CAM Thomas Bruns. Lewie would probably see this as a step down, but has actually gone for the job, so his odds have gone way down to 5/1.

What would be seen as a shock, is if Lewie took the Jaguares job. They look set to name their manager, but Lewie's name could be mixed in. Jaguares have been very poor recently, coming below 10th 4 times in 4 seasons. Their key player is Mexican CB Arturo Ortiz. Odds on Lewie getting that job is 11/1.

Lastly, we have English club Norwich. Lewie hasn't even gone for this job at all, so you can see why we don't rate him. Norwich finished 19th in the BPL, thus costing Dean Smith his job. Their key player is former England U21 CB Jake Cooper. Lewie hasn't gone for the job, thus it could mean that he isn't interested in it. That's why he's only 19/1 for the job.

Who would you go for? Where will Lewie end up next?
Login to Quote

You are reading "To The Edge And Back - A Pentagon Challenge".