http://e0.365dm.com/13/12/16-9/20/Manchester-United-v-Newcastle-David-Moyes_3048006.jpg
The 2013/14 season was one that Manchester United fans will want to put behind them. Sir Alex Ferguson had ended his era, having turned the Red Devils from sleeping giants into one of the most reputable clubs in the world. Two Champions League trophies, 13 Premier League titles and countless other club and personal accolades for the Scottish master, the greatest manager of all time.

His Scottish replacement, David Moyes, didn't fare as well.
http://cdn.caughtoffside.com/wp-content/uploads/2014/04/Leighton-Baines-Everton.jpg
A 2-0 loss to Moyes' former club Everton was the final nail in the coffin, and the once-reputable manager was dismissed from his role. With 4 games left, the club instated player-coach Ryan Giggs as the interim player-manager and the team under the United legend picked up 7 points in the final 4 games. It wasn't enough to make continental qualification, and they finished in 7th. It was their worst finish in 24 years. The 2013/14 Premier League table
Questions were immediately asked. What went wrong? Perhaps the board and fans of Manchester United did not quite realise just how much of an impact the departure of Sir Alex Ferguson would make. A lot of players, such as Shinji Kagawa and Robin Van Persie, had joined on the premise of Ferguso being their manager. And although David Moyes was an undoubtedly good manager, after a great spell at Everton, the wound of Ferguson's retirement ran deep. The United board needed a replacement, and drastically. A season without European qualification could not be allowed again. There needed to be a new dynasty.
Login to Quote

YazanBlueLions
6 years
A Man Utd story, can't wait for the next update
Login to Quote

You should really be able to do well quite early with this challenge, the squad is much better (in FM) than people give it credit for and I think with the right tactic.. a title in the first season is not unrealistic
Login to Quote

http://static.standard.co.uk/s3fs-public/thumbnails/image/2014/04/26/19/Ryan%20Giggs.jpg
Hello, and welcome to my FM15 Manchester United story. This post will be the link for you with the rest of the story, and you can navigate to the hubs of Season 1, 2 and 3. Obviously, for the time being, the hubs are not active but the links will be activated as they are created. Please enjoy what I hope will be a very enjoyable story. 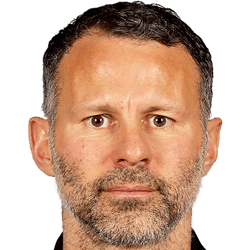 Ryan Giggs is a Manchester United legend, arguably their best player of all time, and holds the record for most games played in a Red Devil shirt. He was interim player-manager at the end of the 2013/14 season, and in this story, the United board chose to stick with him and give him the task of creating the next dynasty at the club.

*Images will link to season hubs as they are created

As I am currently a season and a half into the save, the story's structure will be like this:

The 2014/15 season is one of Manchester United's most important ever, coming off their worst season in 24 years. Newly appointed manager Ryan Giggs was tasked with getting United back where they had been for the past 23 years - the top four. Success in the FA Cup would also be important, but the League Cup was, as usual, just a bonus tournament. Success in the league is most important of all.

This hub will also act as the sole update of the season. 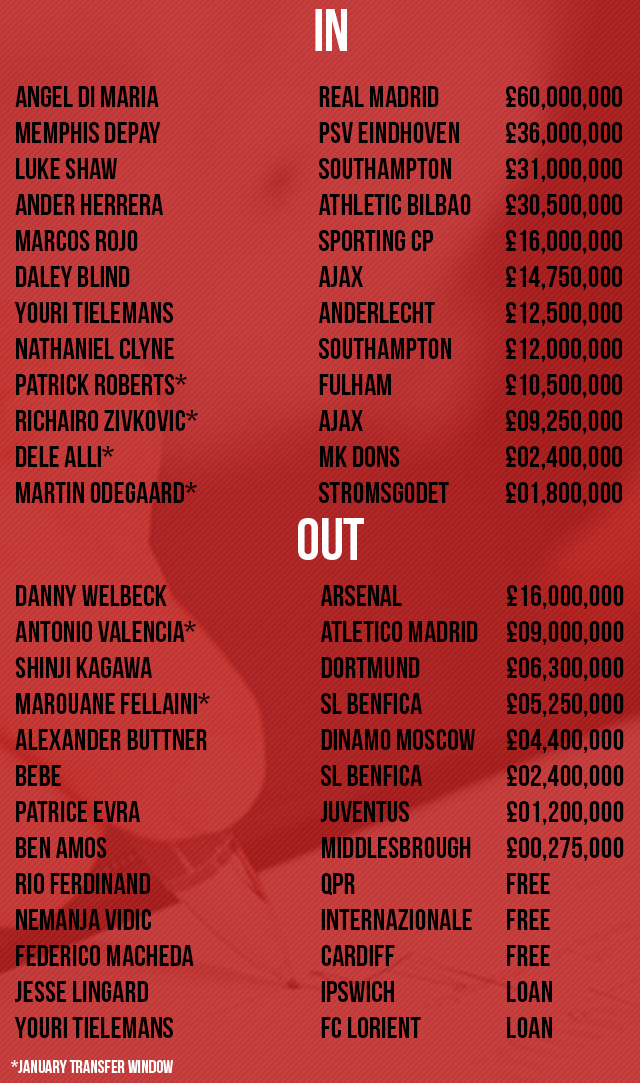 It was an extremely active transfer window for Manchester United, with plenty of players moving in and out of the club. Huge amounts of money were spent on incoming stars, with the marquee purchase of Angel Di Maria for £60,000,000 standing above the rest. Giggs took a big risk by paying £36,000,000 for promising PSV winger Memphis Depay, and there were huge deals for Luke Shaw (£31m) and Ander Herrera (£30m) as well. Defensive reinforcements came in the shape of Marcos Rojo, Nathaniel Clyne and Daley Bind, costing just over £40,000,000 between the three of them, and the final deal in the summer window was for the future, with United picking up the hugely promising Youri Tielemans for £12,000,000. In the January transfer window, Giggs focused completely on youth, signing 4 teenagers for a total price of approximately £25,000,000 - Patrick Roberts, Richairo Zivkovic, Dele Alli and Martin Odegaard.

To make room for all the new signings, there were some outgoing players as well. Danny Welbeck commanded the highest fee, leaving to Arsenal for £16,000,000, whilst Marouane Fellaini and Antonio Valencia left in the January transfer window, in multi-million pound deals, to Benfica and Atletico Madrid respectively. Shinji Kagawa returned to Borussia Dortmund, Alex Buttner was offloaded to Dinamo Moscow and it was an end of an era when United announced that Patrice Evra, Rio Ferdinand and Nemanja Vidic would all be leaving the club in one way or another. Failed youth prospects Ben Amos and Bebe also left the club whilst hot prospects Jesse Lingard and Youri Tielemans were loaned out of the club. 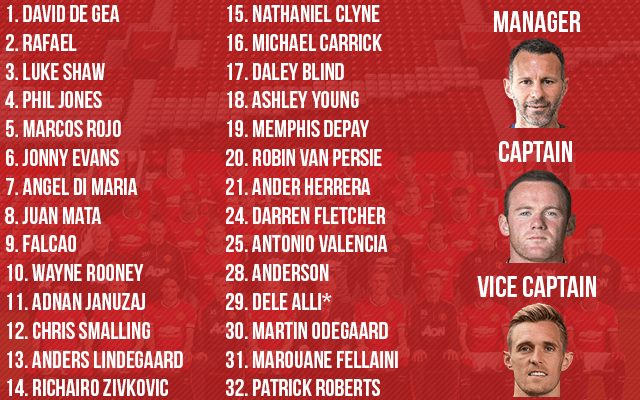 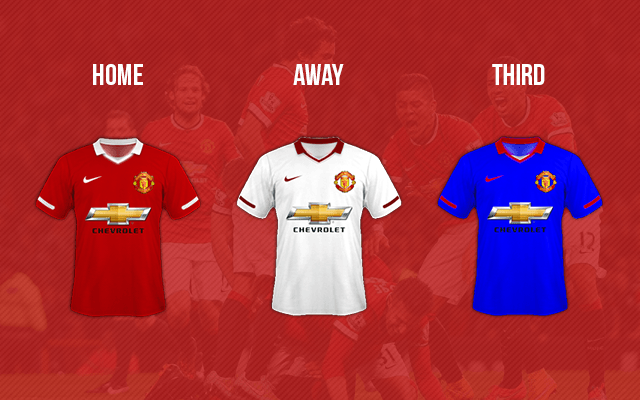 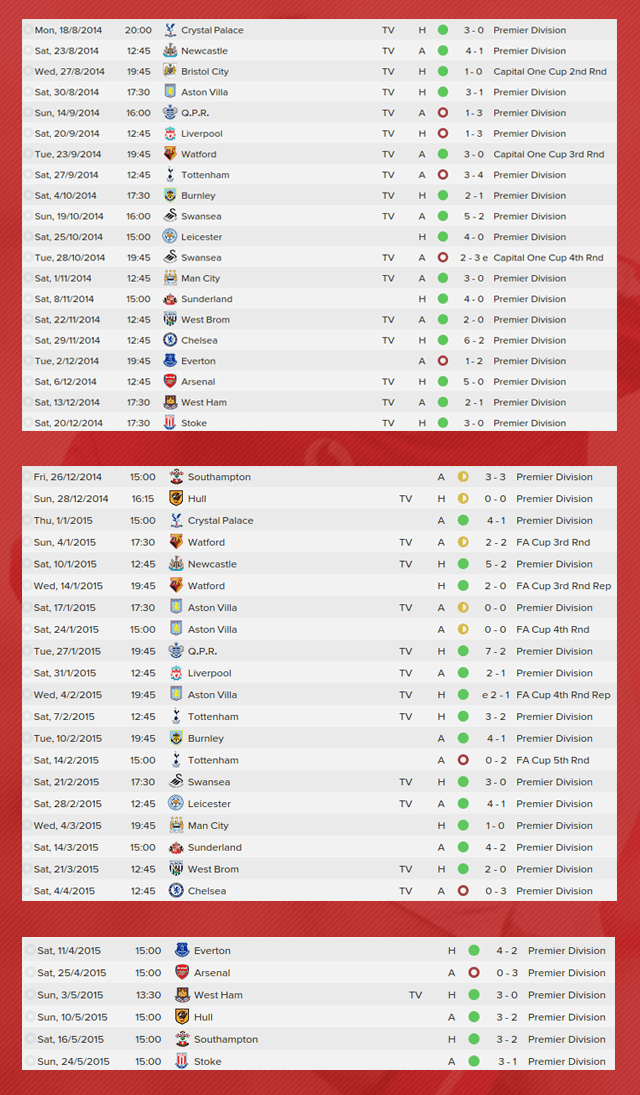 It was an extremely impressive season from Manchester United, and led by Ryan Giggs they swept the best clubs away with ease. Some of the best performances included a 6-2 demolition of Chelsea at home, including a Wayne Rooney hat trick, a 5-0 win over Arsenal where all the goals came in the first 27 minutes, a 7-2 annihilation of QPR and winning both Manchester Derbies, 3-0 away and 1-0 home. United won their last 4 games of the season to finish strongly, but was it enough to win the league? 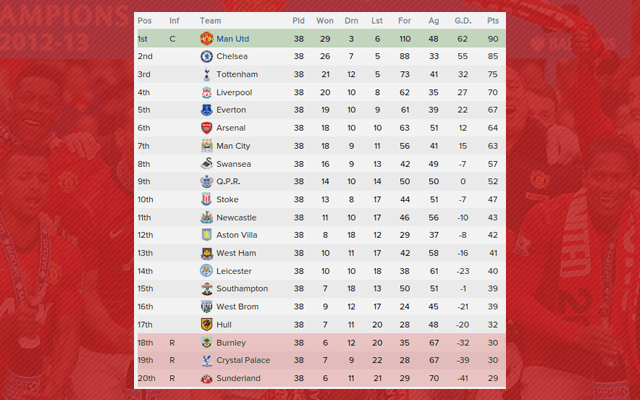 It was! Ryan Giggs engineered one of the best turnarounds in Manchester United memory, taking them from 7th to a triumphant league title. Chasing Chelsea for the vast majority of the season, they dropped 3 points against the Blues and Arsenal late in the season but the league leaders stumbled as well, and wins in the last four games of the season saw them blitz into a 5 point lead come the end of the season. What a performance!
Login to Quote

mgriffin2012
6 years
Some really exciting transfers in there mate! Looking forward to this!
Login to Quote

Griffo
6 years
I knew you would kill it, now bring on the real challenge... Europe!
Login to Quote

Live For FM
6 years
Man United won a title.... never seen that happen before in some time

ScottT
6 years
Something United fans would love to see in real life!
Login to Quote

You are reading "[FM15] Manchester United - The Next Dynasty".