C.J.Lippo
6 years
Hello all & welcome to my 3rd, & final, story for FM16, Russian to the top?
For this story we will be following the exploits of my eastern European alter ego, Kristoph Menchinov, who you can read more about via his Wikipedia page above. It is admittedly a little sparse at the moment but I'll be padding it out a little as Kristoph's career develops.

For those wondering, this will be a journeyman career, very much inspired by the likes of MJK's "Kevin Gauthier" story & Justice's "Christian Schafer" career. Just to name a couple. In which I will start unemployed & attempt to build a career for myself.

As a point of difference between those stories & this, I have decided to take a completely "hands off" approach to this save. That is; I will be responsible for very little else other then tactics, training & man management. Making it a test of "Pure management" ability.

All other decisions, from player & staff recruitment to player sales & contract renewals, will be handled by my D.o.f., Chairman or some other staff member, depending on what is required.

The reason I've decided to take this approach is basically to add an extra challenge to proceedings & make the save a little more realistic.

You see, while it is fun to spend hours scouting the world, finding hidden gems that will give your team the edge over all others, I do feel it does (& has, at least for me) detract from the long term enjoyment of a save, as you inevitably end up with a side brimming with talent that, in normal circumstances, would be far in advance of what you would expect from said club.

I hope by taking these steps, that I will be able to add an extra layer of interest to the save as well as be forced to explore different tactical approaches, many of which I would never normally consider when I can personally recruit to a specific formation/approach.

Anyway, I think this has gone on long enough. I hope you all enjoy & that I can finally find a save I can truly sink my teeth into. Lets do this!

Jack
6 years
Delighted to have another one of your stories again! Great start so far

Griffo
6 years
Journeyman saves seem to be on the comeback, best of luck!
Login to Quote

ScottT
6 years
Looking forward to this mate as the previous stories have been great!
1
Login to Quote


As with anyone who had found themselves unemployed & in need of a pay check, my first task was to work out what jobs would actually be available to me.

Unfortunately, to my knowledge, there was no newspaper I could buy or website I could visit that would give me an idea of what was on offer, so I had to turn to Viktor Lovinskiy, the agent who had handled me throughout my playing days.

Within a matter of hours, Viktor had made contact with the necessary parties & thrown together a list of managerial vacancies from across the globe, which he sent to me via email, along with a reminder that 15% of anything I earnt was to be his. Bloody leech!

Thankfully, I was perhaps better prepared than most for this day.

It was apparent to me quite early on that football was not going to make me rich & famous. I was handy, at best. Definitely not a super star. Definitely not elite. I could make a living from football but not enough to secure my future beyond my playing days.

It was with this in mind that I insisted upon a player/coaching role on my return to the club that had given me my start, Zenit St. Petersburg. The role gave me invaluable experience on the training ground, access to genuine footballing minds & the luxury to study for some qualifications before my days on the field had come to an end. The club that had given me my start as a player, had now given me a start in my new life & for that, I’d be forever grateful.

As I studied the list of prospective employers, the scale of the task at hand soon become apparent. I didn’t fancy my chances of landing a job abroad, my reputation was unlikely to reach that far. I was prepared, yes, but no more prepared than numerous other people whose name would carry more sway then mine ever would in these places. This realisation left me with just the one option Russian first division club, Baikal Irkutsk.

Baikal had only last season been promoted to the first division, & had since found themselves without a manager after their former leader was poached by a larger club. They were long odds to survive, had limited resources & a playing squad ill prepared for the challenges that lie ahead.

In all, it didn’t make for good reading, which is why I was so excited. Surely I would be a chance here? I mean, I don’t imagine a lot of people lining up to take that job. Right?

I quickly whipped myself up a resume & within minutes was all set to take the plunge. 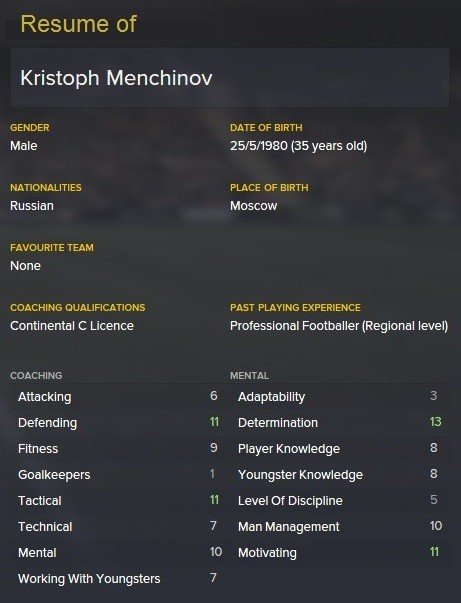 As my mouse hovered over the send button I stopped to think. Irkutsk was almost 6000 kilometres away from my home in St. Petersburg. At a rough calculation, a 75 hour drive! Just attending an interview could be problematic for someone with my limited resources, let alone having to relocate such a distance should I get the job!

I was having second thoughts, serious ones.

As always though, my mind turned to my savings account. How long could I survive before I’d have to find a real job? 6 months? 12? That would be pushing it.

There are only so many of these jobs to go around after all. If I pass on this one, who knows when the next might pop up? My mind was made up. With all the conviction I could muster, I hit send & It was done. Now came the hard part, the wait.

Well, we are in Russia. Home to organised crime & Vodka, who knows what might happen!


I didn't sleep very well that night. I tried everything from counting sheep to vodka. It was no use.

There were too many questions, too many unknowns.

I played out various scenario's in my head & asked myself a ridiculous number of what if's.

What if I didn't get the job? What if I did? What would the interview be like? Would I even get one? You get the picture.

Eventually, exhausted, my brain shut itself off & I was able to get some rest. Not much, but enough.

I was woken at 6.23 by the sound of my phone. It was Victor. I had myself an interview.

I was too tired to be excited. Last I checked the clock, it was 4.15, I figured I was awake another half hour after that.

The time went by quite quickly. I in no way felt ready when we finally sat down to talk but before I knew it the interview was over.

No questions about why they should hire me over someone else. Not a mention of my inexperience. The only questions asked seemed to be whether I'd be happy to do this or happy to work with that. Of course, the answer was always yes.

In truth, I think they were desperate. An opinion that was confirmed, just hours later, as Viktor informed me a contract had been offered.

I didn't even look at it. I'd take it, there was no discussion. I was off to Irkutsk! I didn't know whether to laugh or cry!

Feliks
6 years
Off to Irkutsk, as you do.
1
Login to Quote