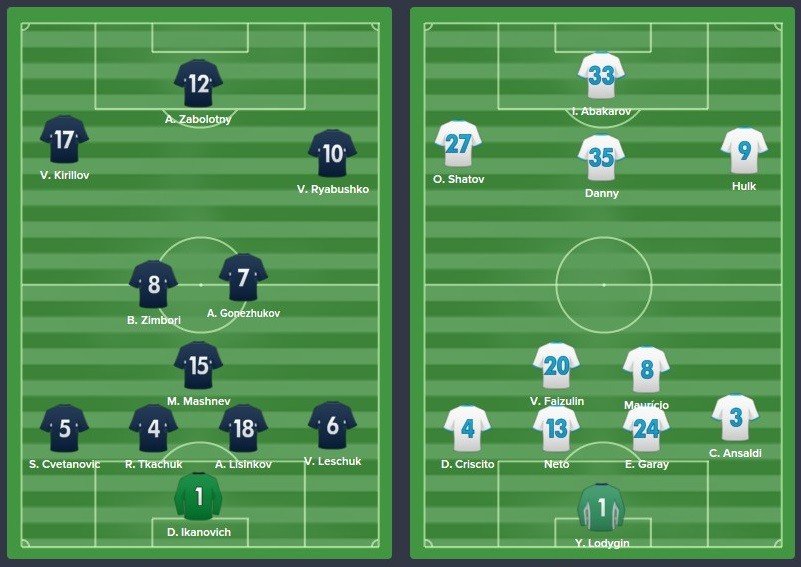 HULK SMASH!!!!! We always knew this game was going to be difficult for us & if we harboured any hope that Zenit would underestimate us, that hope was soon dismissed when the lineups were announced. The champions where at near full strength!

Still, we managed to hold them out for the opening 20 without too many problems but when Hulk pounced on Shatov's saved effort our task become even harder.

To our credit, we kept our heads up & on 35 minutes drew level through Anton Zabolotny & for the briefest of moments I thought we had an upset in us. That hope was quickly extinguished as Hulk added his second before laying a 3rd on to send us to the break trailing 3-1.

Zenit seemed to start the second sluggishly as we enjoyed our best spell of the game, but we failed to make it count on the scoreboard & when Hulk got his second assist, the game was all but over.

4-1 it finishes with Brazilian, Hulk, pulling all the strings, bagging 2 goals & 2 assists on the night.


Goddammit!!! It seems I have missed uploading the months results so I'll just leave this here & update the rest of the month a little later. Apologies.

A truly horrendous set of results heading into our cup tie with Zenit. It seems the guys heads were elsewhere as we went 5 games without a win, including that game.

Thankfully, we bounced back with a couple of wins at the end of the month to save September becoming a complete write off. 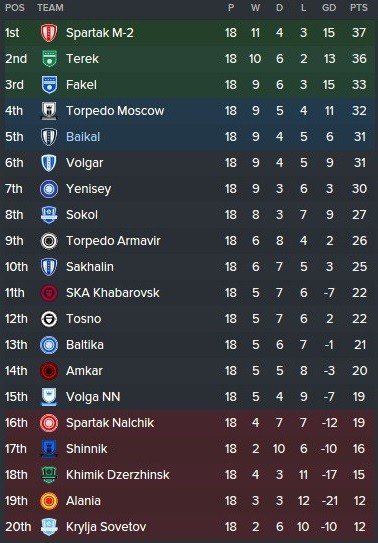 So, despite losing some ground, things could definitely have been much worse. We slip to 5th, still in the playoff spots, which isn't the disaster it could have been.

Spartak 2 take over at the top, closely followed by Terek, while Fakel's early season form seems to have taken a dip as well. At the other end, a surprisingly woeful Amkar are still battling to fend of relegation! 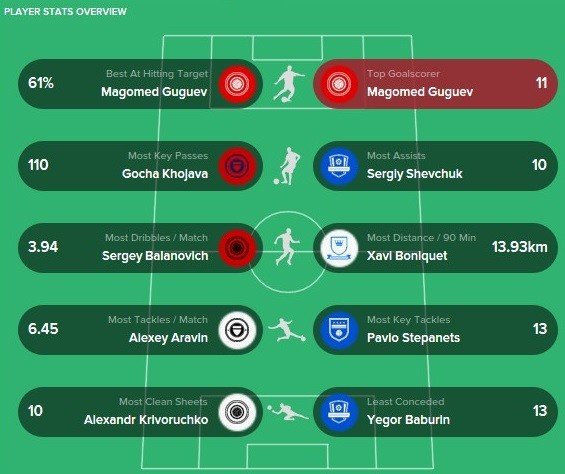 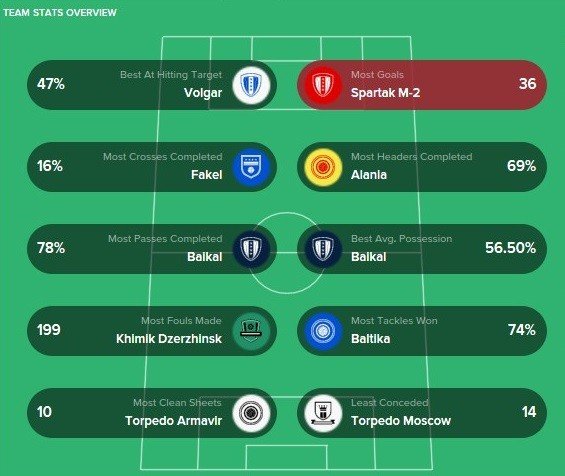 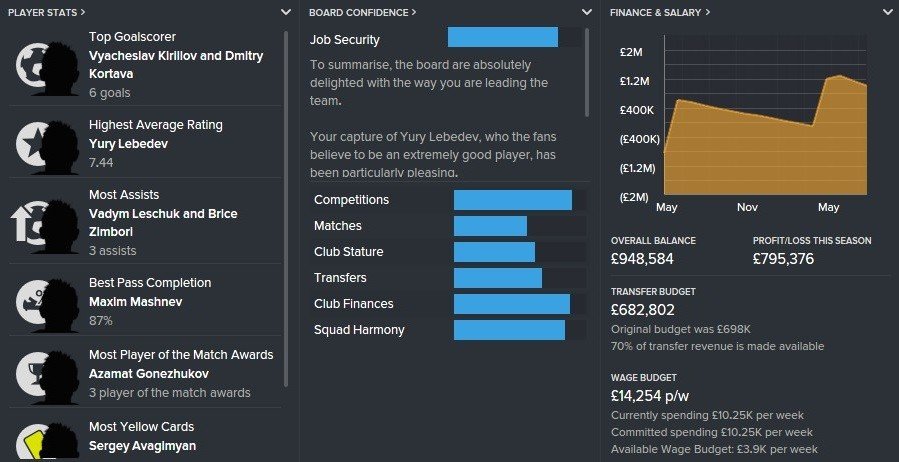 New signing, Yury Lebedev, seems to have settled magnificently topping our average rating charts & resigning Vadym Leschuk to the role of spectator, while we continue to dominate the leagues possession stats & have also taken over top spot in the passes completed category. 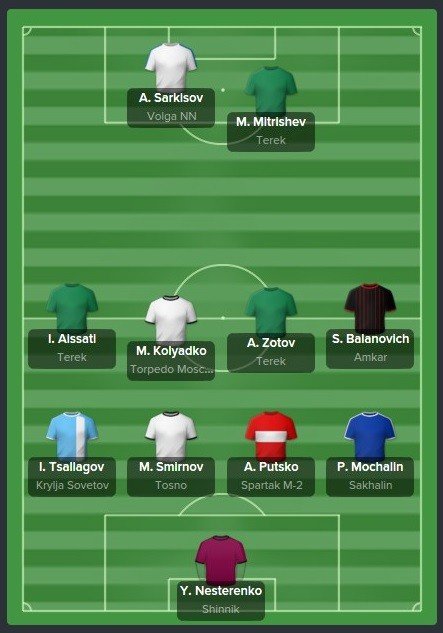 Unsurprisingly we miss out on all counts here, moving on.

2 for 2 on convincing the board to improve our facilities, this time sacrificing a contract renewal in the process. Its nice to see the board so willing to improve the club as a whole rather then piddling funds away on less important matters.

5 matches in October including a match up with top of the table, Spartak 2. I can only hope that the side that won our last 2 games decides to show up rather then the side that lost our previous 5.

It was around this time last year, if I remember correctly, that our form began to drop off & our promotion challenge fell away. Lets hope a repeat is not on the cards this year!

mgriffin2012
6 years
Not the best of months but you're still in with a chance of getting a promotion spot!
Login to Quote

Justice
6 years
A tough month but you're still well in the hunt.... A few wins next month will surely turn things around!
Login to Quote

MJK46
6 years
Tough month. Hopefully you can bounce back
Login to Quote

ninjaskill
6 years
Not a great month but, at least it had a decent ending
Login to Quote 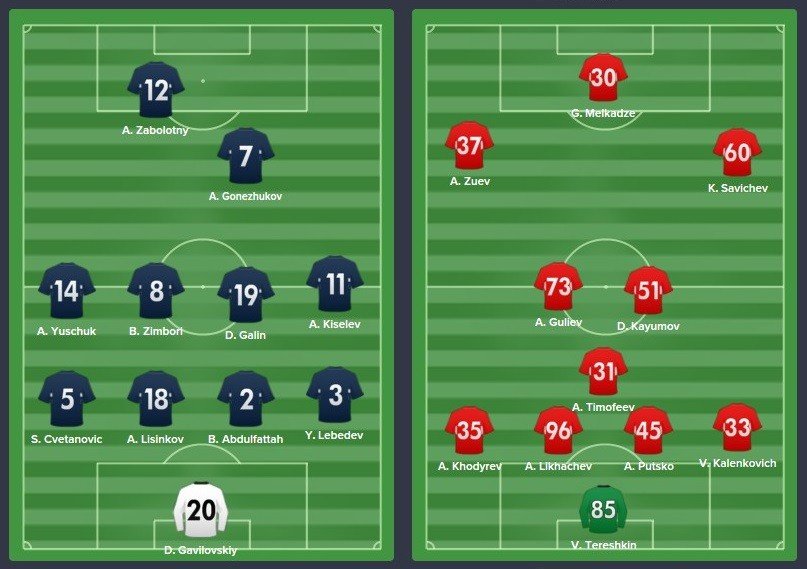 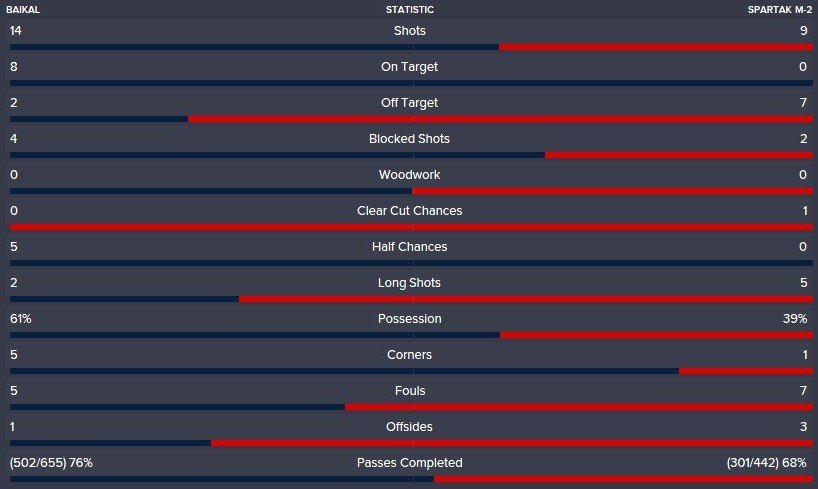 Welcome, ladies & gentleman, to the Anton Zabolotny show! The newly arrived striker, who up until this month, had been a periphery figure, single handedly won us this match with a combination of individual brilliance & lethal finishing.

2 goals from the big man, inside the opening 15 minutes, put us in a commanding position before his 78th minute free kick dribbled in off the post to kill off the Spartak resistance.

A 3-0 win in a game where we failed to create a single clear cut chance an indication of just how good the 24 year old was &, not to give anything away, but this wasn't his first hat-trick for the month!

An impressive return to form in October, highlighted by 6 goals in our final 2 matches by Anton Zabolotny, that proves we wont be going down without a fight this year. A loss at home to Volgar the only blemish on an otherwise outstanding month of performances. 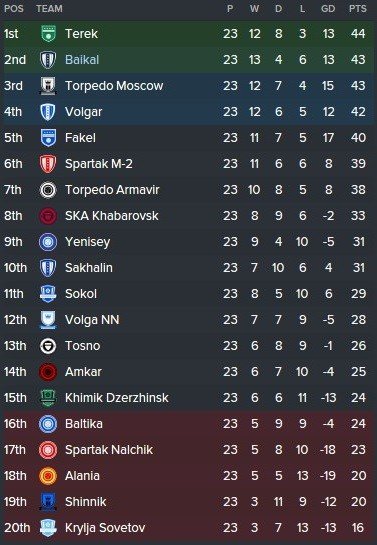 We rocket up to 2nd place, courtesy of our head to head record with Torpedo Moscow, whose record is reminiscent of our own run, following promotion last year.

Terek sit top by a solitary point but appear to be the bench mark this year, proving very difficult to beat. Not much change here, although Zabolotny shoots to the top of our scoring charts with 7 of his 8 goals coming this month. He really has been in lethal form. 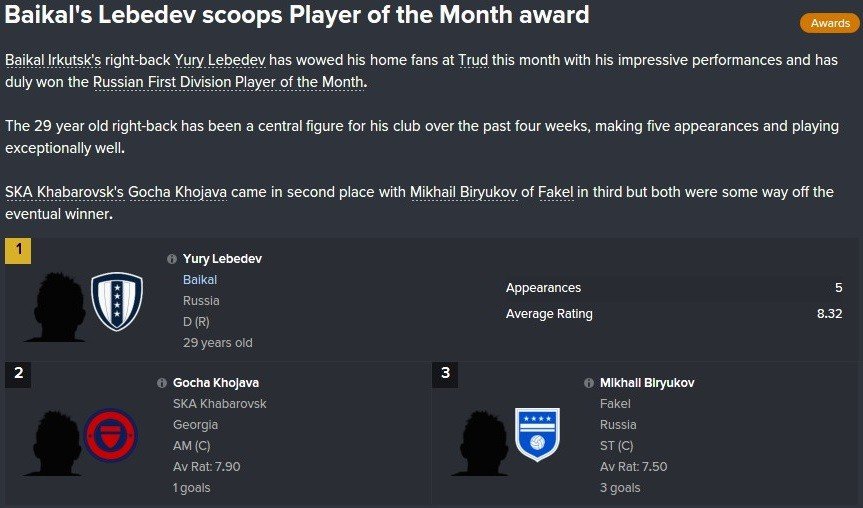 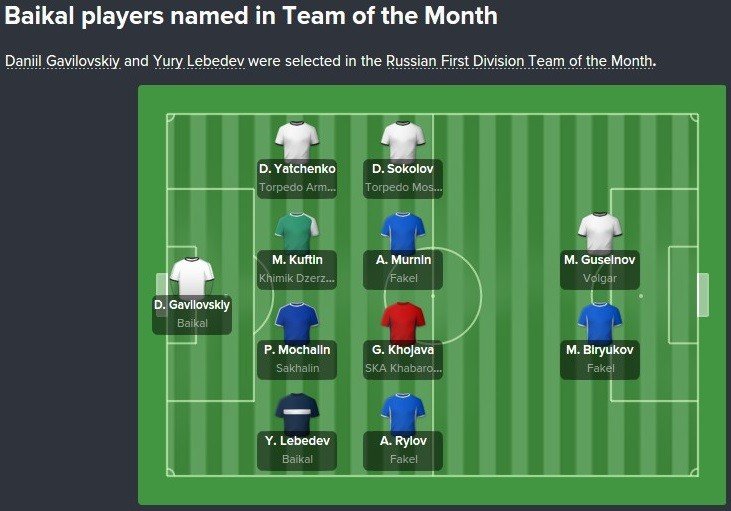 All I can say here is that there must of been some inspired performances by the strikers ho kept Zabolotny out of the team of the month, but on the other hand, its great to see another new face, Yury Lebedev, recognised for his fantastic performances with the player of the month award.

Our final month of competition before the winter break is a bit less hectic then what came before. At this stage last year, we faulted. That cant happen again this time around.

Given our recent form, I want to send a message this month with at least 3 wins & put ourselves in pole position for automatic promotion. Wish me luck!

Griffo
6 years
Geeeez it is tight at the top, gonna have to maintain good form here!
Login to Quote

mgriffin2012
6 years
Really tight at the top mate but you're proving yourself capable of going the distance!
Login to Quote

ninjaskill
6 years
Very close at the top, hopefully Zabolotny can keep his form up for you
Login to Quote

BeanyUnited
6 years
Only just caught up with all of this story and must say that I am enjoying it very much, keep up the good work!
Login to Quote

C.J.Lippo
6 years
Griffo, MG, Ninja - Cheers guys, we are definitely going to have to fight for every last point if we are to challenge, that's for sure.

Beany - Thanks mate, glad you're enjoying it. Always nice to hear from a new commenter 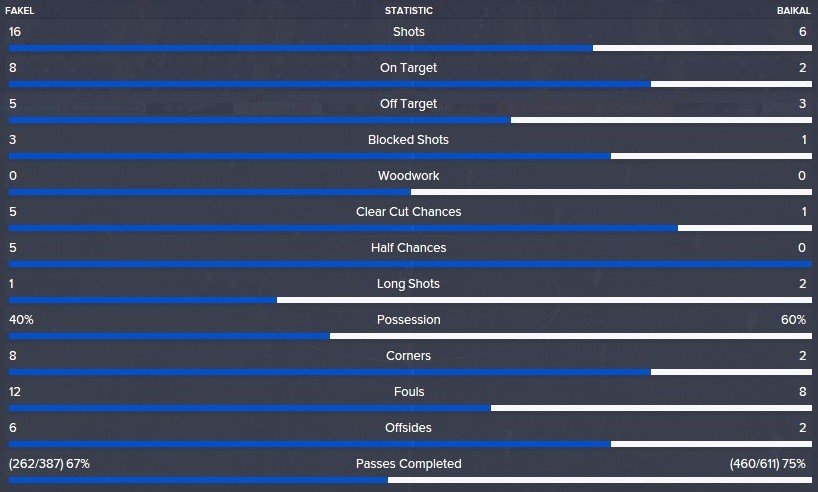 This was arguably the most important game of the month for us with Fakel amongst a number of teams fighting for those promotion places. A loss here would seriously hurt our chances to that end.

We started magnificently with Azamat Gonezhukov netting, having been played in by a nice through ball from Vitaliy Ryabushko, in just the 3rd minute. Fakel though are a determined side & hit straight back following a delightful string of one touch passing that would have unlocked any defence.

From there, there only appeared to be one winner, as we seriously struggled to cope with Fakel's high octane, Leicester-esque, direct style of play.

On the other hand, to continue the EPL analogy, we looked more like Van Gaal's United, all the ball in the world & no idea what to do with it!

Fakel's fullbacks ran riot & their forwards movement off the ball was brilliant. Our defenders looked lost & only a man of the match performance from keeper, David Ikanovich, spared their blushes. A string of impressive saves from the 27 year old meaning, despite being soundly outplayed, we get away with a vital point here. All hail Ikanovich!

The optimist in me says we went unbeaten & that's a good effort, the pessimist thinks we perhaps should have done much better. The truth probably lies somewhere in between. Its not the disaster that befell us this time last year but its not exactly a string of results that says back us for promotion either. 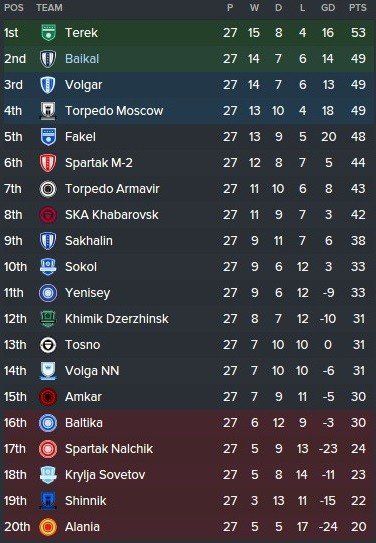 At the top, Terek have built a 4 point lead & are looking like the only side truly capable of guaranteeing themselves automatic promotion although, there is obviously still plenty of football left to play. 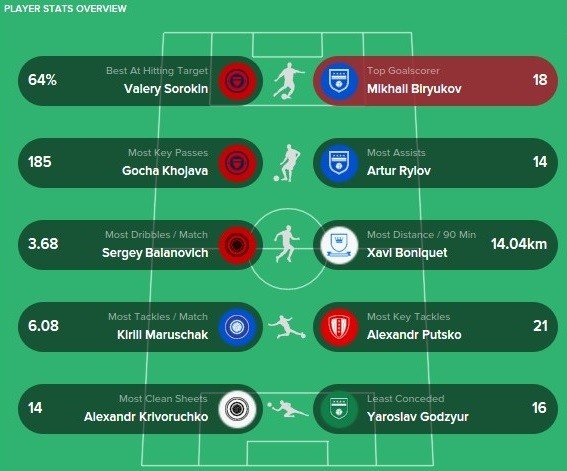 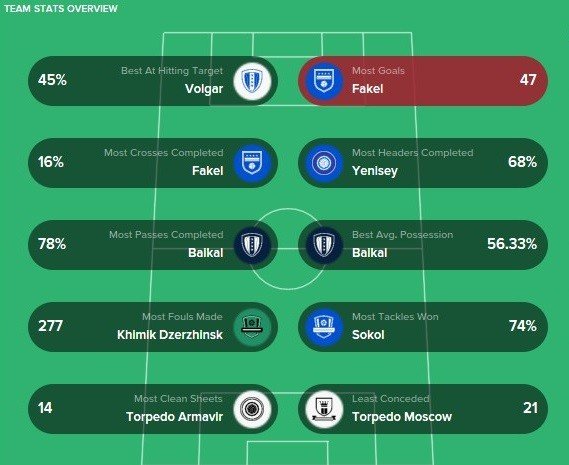 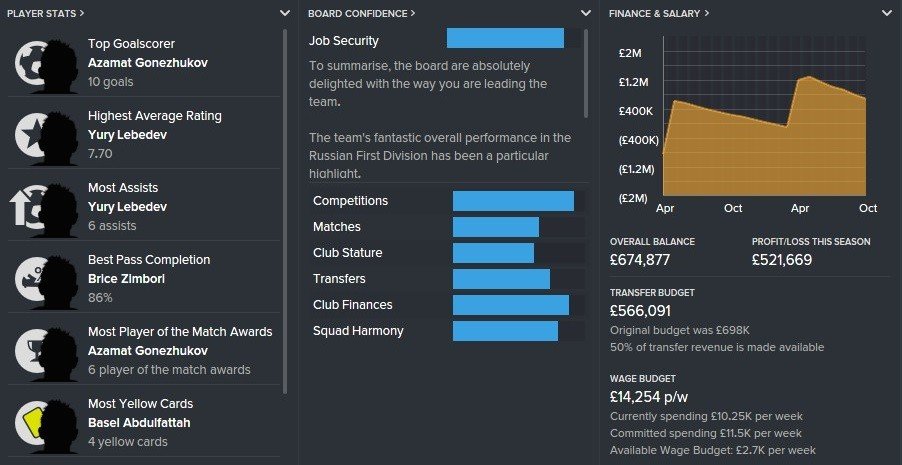 Would anyone mind terribly if I stopped putting these in? Probably not, but you can bet as soon as I do, something interesting happens & I'd have to show it anyway. As you were! 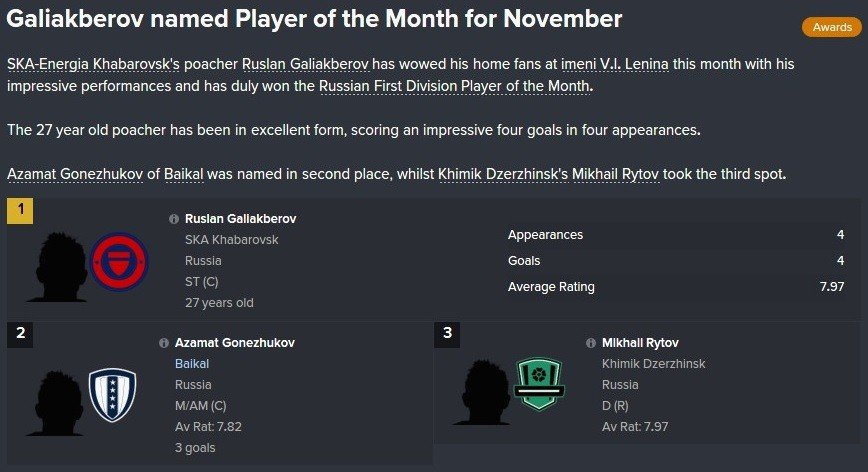 That man again, Azamat Gonezhukov, finishes 2nd in the player of the month voting & books another spot in the team of the month. I'm really running out of ways to describe just how great he has been since my arrival, just a marvellous player, full stop!

Just in time for the winter break, I complete my latest coaching qualifications. Hopefully what I've learnt will help the side better compete for the remainder of the season & perhaps even propel us into the Premier Division!

A 3 month break now to prepare for the final assault on our push for promotion. With my contract again up for renewal at years end, our results in the final 2 & a half months of competition could decide much more then where the side will be playing next year.

In saying that though, I do feel as though we are building a good thing here in Irkutsk & that wont be easy to walkaway from. The winter break not only a chance to recharge for the final push but also a chance personally to take stock & decide where my future lies.

Soze
6 years
Still super tight at the top! Bet you're kicking yourself over those draws.
1
Login to Quote