Fair to say I have enjoyed a successful start to life in China. With little to no clue about what to expect from most sides, I sent the side out to attack, regardless of our opposition, & it seems we caught many of them by surprise. 4 wins from 4 matches, 11 goals for, 4 against, a stunning way to introduce myself to the Tianjin fans! 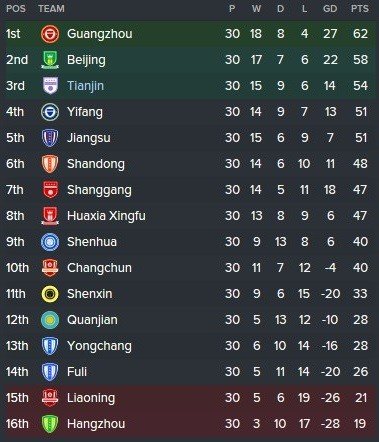 The answer to your question Mgriffin? Yes, we did do something amazing & qualify for the champions league! Fredy Montero was absolutely on fire, bagging 7 goals in 4 matches as we cruised into Asia premier competition. Unfortunately. he is demanding a move to a bigger club but on that form, Ive no intention of letting him leave!

I only include this as it is the first time in my career that I haver taken home such an accolade. Hoorah for me! 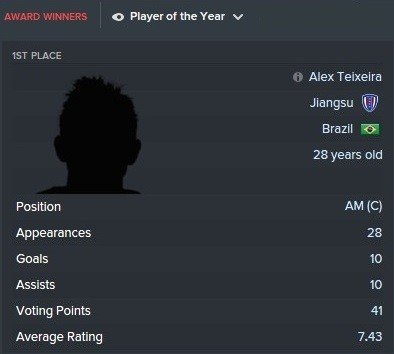 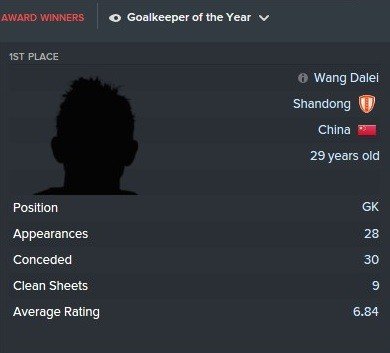 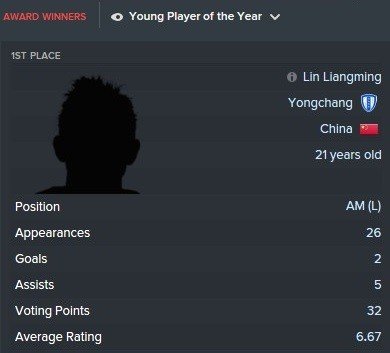 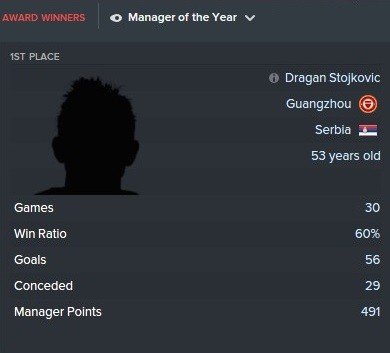 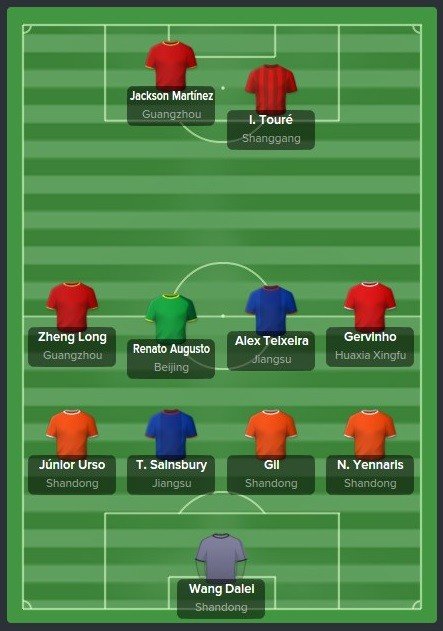 Not a lot of good news personally in the end of year awards however it does appear that the league has hung onto the majority of the big names we all know & love. Obviously I'm going to have a challenge on my hands repeating the success we've achieved this year.

This was always going to be of great interest to me. Unlike its European counterpart, the Asian Champions League isn't the financial windfall you might expect, in fact, I believe I remember reading an article that suggested, for the majority of clubs that participate, it ends up costing them money, rather then winning them any. That makes financial backing from the board even more important & despite these numbers being a substantial improvement on anything I received at Baikal, it appears our owners aren't as well off as many in the Chinese league.

Oh well, we wont be competing for any of Europe's big names. In order to improve we'll have to be clever. It just so happens, I have a plan in mind. More on that later though.

ninjaskill
4 years
Nice start to life, rivalry win in the Champions League a manager of the monthI expect big things for next year
Login to Quote

swanny8589
4 years
only just seen this story and im loving the move to china,

good luck though
Login to Quote

Griffo
4 years
Well .. impressive Lip, now bugger off back to Russia haha all the best in the season ahead mate
1
Login to Quote

Nice little piece of news following the end of the season. We had previously only been allowed scouting within Asia, so to be upgraded to worldwide was a massive help even though my plans for this window had already been all but finalised. Still, it'll be a big help moving forward. 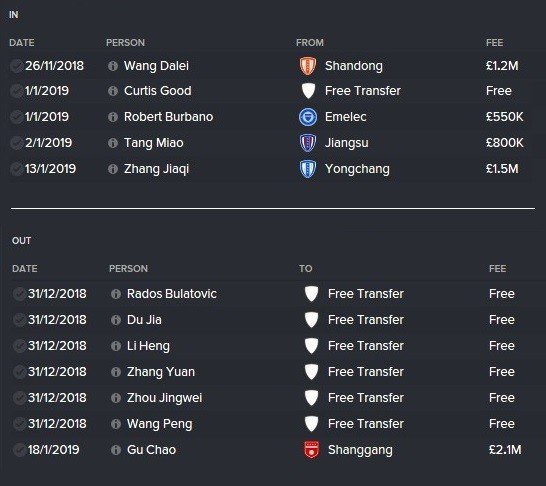 Following the announcement of the budgets I'd have to work with, I formulated a plan that involved raiding the national side for as much talent as I could afford rather then attempting to land a big name foreign player.

In all I'm fairly happy with what we've done, although we did miss out on a few targets. Anyway, lets not dwell in the past, here's who we bought in.

Given the restrictions on signing foreign goalkeepers, landing a top notch keeper was always going to be of high importance & I'm pleased to say, we've got the best of the best in Wang Dalai.

Not only is he the national teams number 1, he is also the current holder of the keeper of the year award. A great pick up at 1.3M.

On a side note, this deal was also part of one of the greatest "only in FM" moments Ive recently had. Having landed the best keeper in China for 1.3M, I proceeded to sell my former 1st choice, an uncapped hack named Gu Chao, for 2.1M. Obviously, I was quite proud of my dealing, however it lasted all but one click of the continue button as my new keeper was immediately injured on international duty & would miss almost the entire pre season. Only in FM!

I figure every good team needs an Aussie on board & the signature of former Newcastle defender, Curtis Good, brings our tally up to 3. Some might say that's toomany, but can you ever really have enough Aussies? Yeah, you probably can. I'd like to sell the other 2 but it seems no one else shares my enthusiasm for Australian footballers. Go figure!

Crafty little Ecuadorian who has become one of my favorite FM bargains. With a price tag of just 550K he could be the signing of the season, assuming he adjusts to life in China relatively quickly. Definitely one to watch!

Wasn't my first choice right back but still a Chinese international who could be very handy with his pace & crossing ability. I like my fullbacks to get forward as often as possible, so he should fit in well.

Again, not my first choice but still an international & an improvement on what we have. Looks solid defensively, is strong & has a high work rate. Think a Chinese Mile Jedinak!

So, there they are. Our new additions. Will it be enough to maintain a challenge both domestically as well as in Asia? I don't know. For that we'll just have to wait & see but I am liking the balance of our side, at least on paper.

Quite a busy schedule as I look to get our new guys settled in as soon as possible. Its a task that will be made harder with our Chinese internationals away until the day before our Champions League qualifier against a yet to be decided opponent.

In any case, we'll do our best to get by &, with a bit of luck, manage to build some momentum before the new season. That's the plan anyway, although I can already tell I'm going to have to manage our internationals carefully. As always, wish me luck.

Bit of a shortened pre season in the end as our qualification for the group stages of the ACL means our final few games become surplus to requirements.

As far as results went, they were very hit & miss with our Chinese internationals only playing our ACL qualifier before being rested for the beginning of the campaign.Still, I have been impressed by a couple of the young guys that have come in, so its not a complete write off.

Bit of a tough draw here with Japanese side, Osaka, Korean side Jeonbuk & mighty Australians side, The Central Coast Mariners. It'll be hard but I think we can qualify from this group. Possibly in 2nd behind Jeonbuk? We'll wait & see I guess. 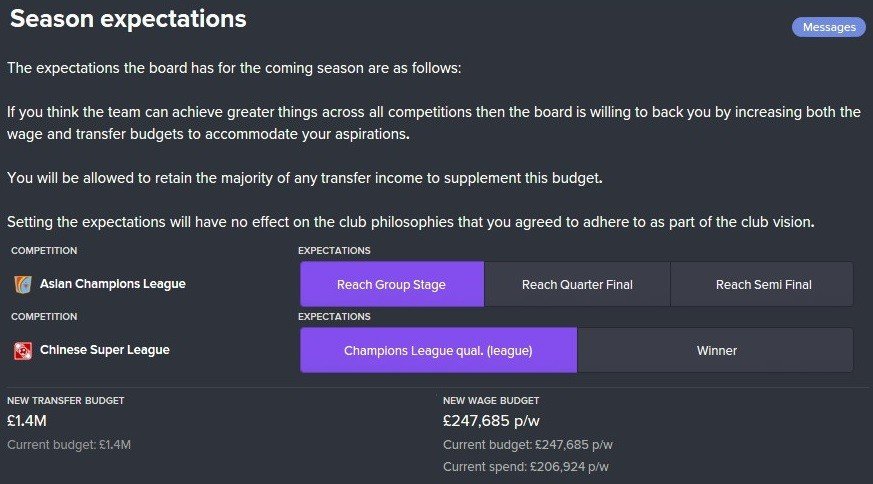 So, we've already met our ACL expectations by defeating Sriwijaya in qualifying. So that takes a bit of the pressure off there.

In the league, we are expected to again qualify for the ACL which means at least a 3rd placed finish. Quietly confident there.

The bookies seem to think, with a bit of luck, we could mount a title challenge & after browsing through the comparison screens, I tend to agree. We may lack a bit of individual brilliance when compared to some other sides but it would appear we have an experienced, well rounded squad with few genuine weaknesses, which should hold us in good sted. Here's how we stack up. 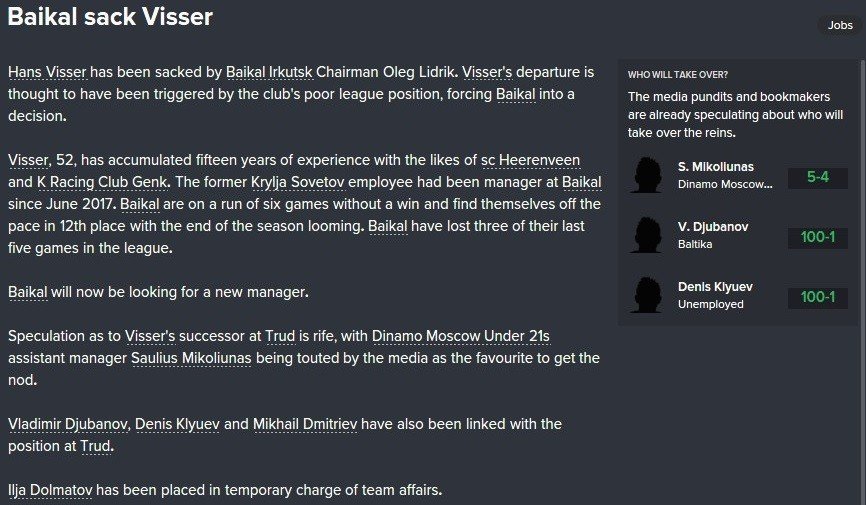 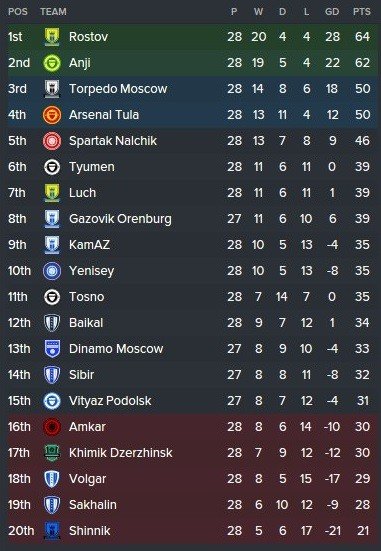 So, as expected, its been a struggle for Baikal after dropping out of the Premier Division. Sitting in 12th place having been expected to challenge for promotion was never going to be good enough & my former assistant pays the price by being sacked. Tough times in Irkutsk!

An extremely hectic start to our campaign with 3 ACL group matches combined with 4 league games. You'll also notice another North China Derby in there as well. Should be very interesting!

In all, I'd like to put ourselves in a strong position in the ACL, with at least 6 points & also position ourselves towards the top of the league table. It wont be easy, especially with games coming thick & fast, but that's what we'll aim for. As always, wish me luck.

ninjaskill
4 years
Decent looking window. Unlucky for your old assistant though, you got a job for him again?
Login to Quote

mgriffin2012
4 years
Some good signings in there mate and a good draw in the Champions League! Can't wait to see how well you fare in China and hopefully Jiangsu and Guanghzhou have something coming for them!
Login to Quote

So, after several failed attempts at uploading a match of the month, Ive given up on it until I work out WTF is going on.

The month began with our first 2 ACL group matches & after a first up win against Japanese side, Osaka, we were thoroughly beaten by South Koreans, Jeonbuk Motors.

Our league campaign began with a disappointing draw to Meizhou, before keeping my 100% win record in the North China derby alive by beating Beijing 1-0. That was followed by another disappointing draw, this time against Quanjian, before hitting rock bottom by getting beat by Australian side, Central Coast Mariners.

To close the month, we did bounce back by beating Changchun but in all, its been a very frustrating beginning to the season. 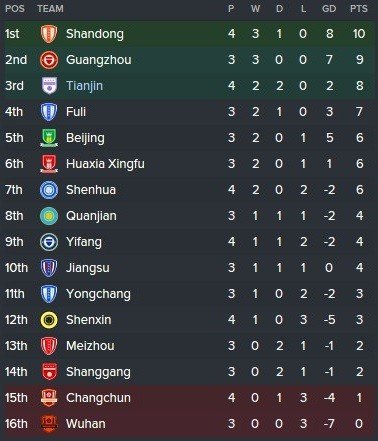 Things don't look too bad here until you realise that the majority of sides have a game in hand on us. By the time those sides catch up, we could be sitting as low as7th place, which seems a little more deserving considering our less then impressive start.

So, after just 3 games, we find ourselves on the precipice of elimination with one more loss almost guaranteeing our exit. Not at all what I'd hoped for from our first month of competition. We will take some consolation in the fact that 2 of our 3 remaining matches will be played at home but with so little room for error, even that wont make our lives that much more comfortable. 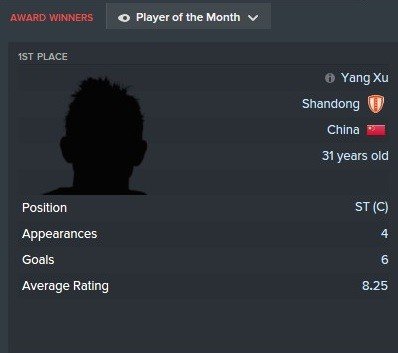 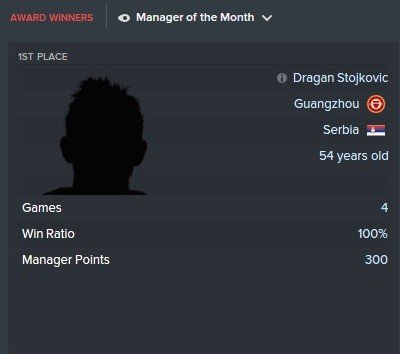 6 matches in April beginning with a trip to league leaders, Shandong. That match will be followed, just 4 days later, by our must win ACL game against Osaka. I will most definitely have to manage the squad carefully for those games.

We then have 2 league games which should be reasonably comfortable before just a 3 day gap to our return match with Jeonbuk.

To be honest, if we are still a chance of progressing in the ACL by May, I'll most likely be content. We must show signs of improvement in the league as well however, so its going to take maximum effort by our entire squad, not just 1 or 2 players. As always, wish me luck!

Griffo
4 years
Reasonable start, the loss against the Central Coast Mariners certainly comes as a shock!
Login to Quote

BeanyUnited
4 years
Fairly reasonable start mate especially in a new league etc, I for one always take a few months in game time to adapt so you are off to a good start in my eyes!

ninjaskill
4 years
Decent start just have to press on a bit. Also how is losing to a team made up of players all from the greatest footballing nation on earth a bad thing