Ryman South side Carshalton Athletic FC have gone bust after failing to pay long lasting debts that have been run up over a number of years under various chairmen. All players and staff have been made redundant and the club has been relieved of its place in the Ryman South which is the 8th tier of English football. It is unclear if the league will downsize to 23 teams or whether the space Carshalton AFC have left will be filled by another club.

Club Set for 5 Promotions Without Kicking a Ball

Ashford District Football League side New Romney FC are set for a dramatic rise up to the Ryman South after their chairman Will Johnstone proposed that New Romney FC should take now extinct Carshalton Athletics place in the league. If the proposal is granted, Johnstone has promised to build a new ground to meet league requirements and to jump from amateur to semi-professional. New Romney were only re-founded in 2014 after the senior side dissolved in 2008 and have since only had youth teams competing.
Login to Quote

New Romney FC have been granted a place in the 2015/16 Ryman South season after Carshalton Athletic went bust a week ago. New Romney were only re-founded in 2014 and played amateur football last year. Chairman Will Johnstone said that he would turn the club semi-pro if they were allowed into the league and confirmed today that a new stadium was in-line for the club if the council allows it. It is a clean slate for the club as all players are deemed not suitable for league football. The club are looking for a new manager expect to name the new boss in the next couple of weeks ahead of the new season.


What lies ahead for New Romney FC?

New Romney is a town of just under 7,000 people and the nearest professional team is Gillingham FC. However, there are semi-pro clubs such as Hythe Town and Folkestone Invicta just a matter of miles away.

The New Romney Sports & Social Club will be used as the clubs training ground as it was bought from the council in the wake of the clubs plans to go semi-pro.

Will Johnstone the chairman of New Romney has said that the new ground is welcomed by the council and the new stadium should be ready for the summer of 2017. He said the club will play home games at Reachfields, which is used by now divisional rivals, Hythe Town. No pictures or plans have been released of the new stadium yet. 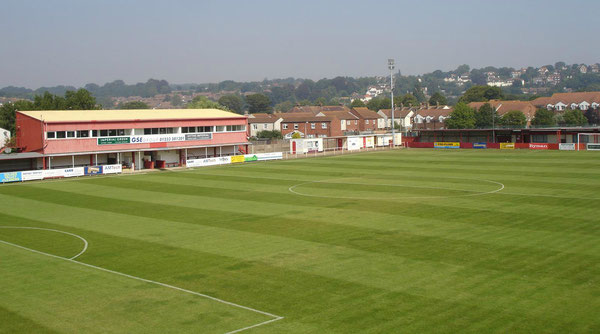 Above: Reachfields Stadium, where NRFC will play home games alongside Hythe for the next two years
Login to Quote

8 years minimum! Lets hope so though!
Login to Quote

We would like to thank Edu for his time and dedication in his short time at the club and wish him all the best in his new role.

Edu Rubio has been appointed as the new manager of New Romney Football Club after leaving his dual-role at MK Dons. Rubio has a history of working at small and large clubs at youth level, his new role is his first time managing a senior side.

Edu Rubio’s (above left) career started at Valencia in 2001 where he was the head coach of the Mestalla youth team. He then became Head of Youth Development at 5th tier side CF Cracks in Spain just outside of Valencia. He then moved to England to Milton Keynes where he joined MK Dons as U13’s coach, later leaving to work with the English FA to help with youth setups across the country. Chelsea was his next destination where he combined with Brendan Rodgers coaching the Under 18’s and reserve teams. He then volunteered to work at the Nike Academy where he was a coach for two years before leaving for MK Dons again to work as the Head of Academy coaching.

The well-known Spanish football writer congratulated Rubio on his new role on Twitter. Balague also works in non-league football as a director at lowly Biggleswade United.
Login to Quote

You are reading "We Came From Non-League!".