mgriffin2012
4 years
Into the next round! Momentum going into the latter rounds will be needed!
Login to Quote Celtic's 19 year old left back Kieran Tierney has reportedly been subject to multiple bids from some of the Premier League's biggest clubs, including Manchester City and Tottenham. Celtic have reportedly rejected all bids and it is thought that Brendan Rodgers now has an unhappy player on the books.

A number of clubs are rumoured to have made a bid of £2 million but they have all been turned down with Celtic holding out for £10 million for the talented youngster. Tierney broke through last season at Celtic Park, making 33 appearances for the first team, and his new manager Brendan Rodgers wants the youngster to stay at the club and fight for a place.

Brendan Rodgers:"Kieran is a fantastic talent and I admired him from away last season. I want him to stay here and fight for a place, because if he went to the Premier League, he'd be playing in the reserves or out on loan anyway. I think, after last season, he needs to continue his momentum."


Manchester City, Tottenham, Arsenal, Liverpool and Manchester United are all still pursuing the one-time Scotland international, and whether or not he can be persuaded to stay is yet to be seen.
Login to Quote

Griffo
4 years
Always tough to hold onto players in a lower ranked league, best of luck!
Login to Quote

mgriffin2012
4 years
Really hope you can keep hold of him! Has the potential to be a fantastic player!
Login to Quote Celtic have announced the signings of Harry and John Souttar on permanent and loan deals respectively.

17 year old Harry and 20 year old John played for Dundee United together last season but split ways momentarily with John signing for Hearts of Midlothian in January of this year.

But with the news of his brother signing with Celtic, the talented and versatile midfielder expressed a desire to join him under Brendan Rodgers and the two clubs agreed on a loan deal, with a future fee believed to be around £1,000,000.

John made 35 out of a possible 38 appearances in the Premiership last season for Dundee United and Hearts, with Harry making two appearances and choosing not to follow his brother out of the club. Celtic agreed a £350,000 fee for the towering centre back, beating out interest from Stoke, Rangers and Crystal Palace, and fortunately for them managed to attract his talented brother in the process.

The two players' style of play varies widely, and there is a noticeable physical difference. At 204 centimetres, Harry Souttar is the tallest professional player in Scotland and possesses a considerable leap as well. Despite lacking technical skill, he is a very solid and reliable defender. John can also play as a centre back but is more suited up the ground, possessing a keen eye for the pass and a strong technique, as well as being willing to challenge for the ball despite being a full 6 inches shorter than his brother. One problem that has arisen with the elder Souttar however is his work rate, but new manager Brendan Rodgers says he's keen to work with the pair nonetheless.

Brendan Rodgers:"The Souttar brothers are two of the most promising youngsters in Scotland. We had our eyes on both of them but didn't really expect Hearts to give John up after just signing him, but when we agreed to sign Harry, we managed to agree to a deal with Hearts to bring his brother in too. I'd like to thank Robbie Neilson for keeping the interests of the player at heart."


Harry and John are both expected to turn out for the Celtic Under-21 side for the time being although there is a possibility of first team call-ups for both.
Login to Quote

Xander
4 years
Good stuff Feliks. Lots of signings so far and seem to be setting up Celtic for a long run. Keep it up
Login to Quote

mgriffin2012
4 years
Very good signings, hope they can hit the ground running for you!
Login to Quote

Yet another hat trick from Celtic's striker Leigh Griffiths has seen them defeat Northern Irish outfit Crusaders FC a comfortable 6-0 in Belfast in the 3rd Qualifying Round of the Champions League. The six goal lead heading into the leg at Celtic Park has all but secured the Bhoys transition to the Playoff stage.

Griffiths scored his first in the 9th minute, hitting a fine volley from just outside the 6 yard box from a Garbutt cross. Garbutt himself added the second, storming into the box and collecting a deflected cross before stepping around Crusaders' Kenneth Mitchell and hitting it flow and hard into the bottom right corner. Celtic made it 3-0 by half time with a flowing counter attack in the 38th minute culminating in an easy finish for Griffiths.
http://e2.365dm.com/15/08/16-9/20/leigh-griffiths-celtic-dundee-united_3340610.jpg

In-form striker Leigh Griffiths had 2 goals to half time
Experienced signing Kolo Toure added the fourth goal, heading it over the Crusaders keeper from a well taken Commons free kick. As has happened previously, the Celtic attacking drive slowed down but they still managed to provide a spark and score 2 more goals in the last 10 minutes. Commons assisted another, this time from a corner, and again it was a centre back who converted, this time Erik Sviatchenko. In the 87th minute, Commons' free kick cannoned off the crossbar and Leigh Griffiths snuck past his marker to tap in his third, and his side's sixth.

"Again, we didn't have a lot of pressure on ourselves but we managed to put it beyond doubt anyway. Leigh and Kris combined beautifully today, which was a real joy to see, and when you have both centre backs scoring you know the team has character."
Login to Quote

walkinshaw
4 years
I've never seen the two but hopefully they do well for you bud, also a nice demolition of Crusaders. It's always good to beat the neighbours 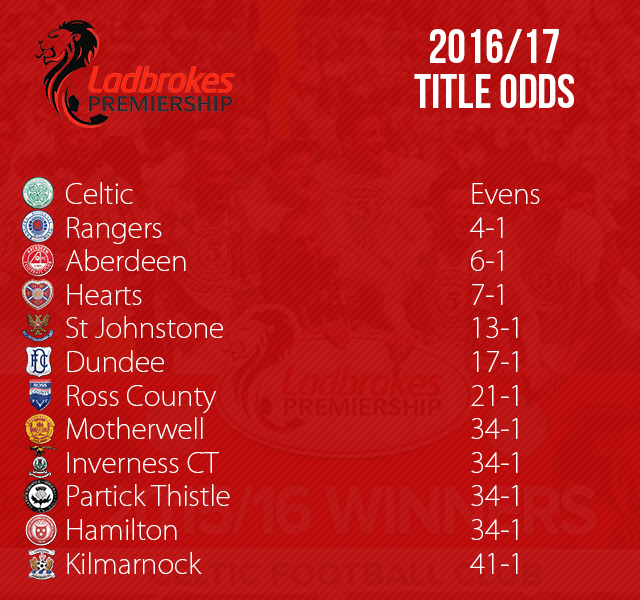 The title odds for the 2016/17 Ladbrokes Premiership season have been released with just 2 days to go until kickoff, and it is no surprise to see Celtic sitting comfortably on top in the bookies' eyes. The Glasgow-based side has odds of 2-1 to take out the title for the 6th consecutive occasion, but this season have sterner competition with the return of Rangers.

At odds of 4-1, the other half of the Old Firm are surprisingly second favourite for the title despite this being their first season back in the top flight since 2011/12. With Europa League spots up for grabs in 2nd and 3rd position, their biggest competitors will be Aberdeen (6-1 odds) and Heart of Midlothian (7-1).

In the middle of the pack, with an outside chance of making the Europa League, are St Johnstone (13-1), Dundee (17-1) and Ross County (21-1). Behind them are 4 clubs all looking to squeeze out of the lower half of the competition when it splits, and avoid relegation - Motherwell, Inverness CT, Partick Thistle and Hamilton, all with odds of 34-1, and then the relegation favourites are Kilmarnock with title odds of 41-1.
Login to Quote