Hi guys, I am going to be starting a story with Sampdoria, this is my first attempt at writing a story on here however I have been reading some of the brilliant stories on here for years.
I chose Sampdoria as they had a top team in the Late 80s/Early 90s and I want to bring them back up to that level of being a Top European and then hopefully exceed those achievements aswell.

I will be writing the story in a News report style with some interview type elements
I will begin my story as if Vincenzo Montella has just left as he did back in July rather than after Marco Giampolo who has just taken over in real life. i will be using an updated database that has the new transfers upto the 10th August and all the promotions/relegations from the big leagues.

You will see my choice of manager in my next posts.
Feedback is very much appreciated.

Thanks for taking the time to read and Enjoy!

AC Milan have appointed Sampdoria manager Vincenzo Montella as their new boss on a two-year contract.

The 42-year-old former Italy striker replaces Cristian Brocchi at the San Siro after the Rossoneri decided to make another change in the dugout.
Brocchi only took over from Sinisa Mihajlovic in April but failed to turn around Milan's fortunes as they slumped to a seventh-place finish in Serie A.

Montella managed to guide Sampdoria away from the relegation zone last season and will make his move to Milan official next month.

In a Suprise appointment Sampdoria have appointed disgraced former player Francesco Flachi as their new manager on a One Year Contract.

On 21 September 2006, Flachi was suspended for two months by the Italian Football Federation as investigations concluded he and teammate Moris Carrozzieri were gathering information for gamblers in Italian football. Their club received a €20,000 fine.
Trace amounts of cocaine were found in Flachi's system in a random test after a 0–2 away loss against to F.C. Internazionale Milano on 28 January 2007. On 31 May, he was suspended for 16 months and, later, the ban was increased to two years. As a result, his contract with Sampdoria was canceled.

What made the appointment even more suprising is the fact Flachi has no previous experience in management however sources say he has obtained a Continental A Licence.

The reason behind the appointment may have been the sheer passion that Flachi could bring in the Sampdoria dressing room that has been lacking for years.

Newly appointed Sampdoria Manager Francesco Flachi has offered Liverpool striker Mario Balotelli the chance to “relaunch” his career at the Serie A outfit.

The Reds are looking to off-load the Italy international, who is back training at Melwood following his disappointing season-long loan at AC Milan.

Finding a club for Balotelli has proved problematic but under Flachi Sampdoria are open to the idea of taking on the controversial frontman and reinvigorating his career to heights it was once touted to reach.

“Just like myself Balotelli is Balotelli’s worst enemy,I feel like Mario needs us just as much as we need a player of Mario's quality.” Flachi said."

Balotelli may need to take a slight cut from £125,000 wage if he was to join the Blucerchiati but many pundits are saying that this is the best option for Balotelli if he wants to progress his career.

Balotelli has spoken about the prospect of staying at Liverpool but there is little chance of him forcing his way into Jurgen Klopp’s plans with Sadio Mane, Daniel Sturridge, Divock Origi and Danny Ings all ahead of him in the pecking order and with this potential Sampdoria move Mario may be back in Italy in no time.
Login to Quote 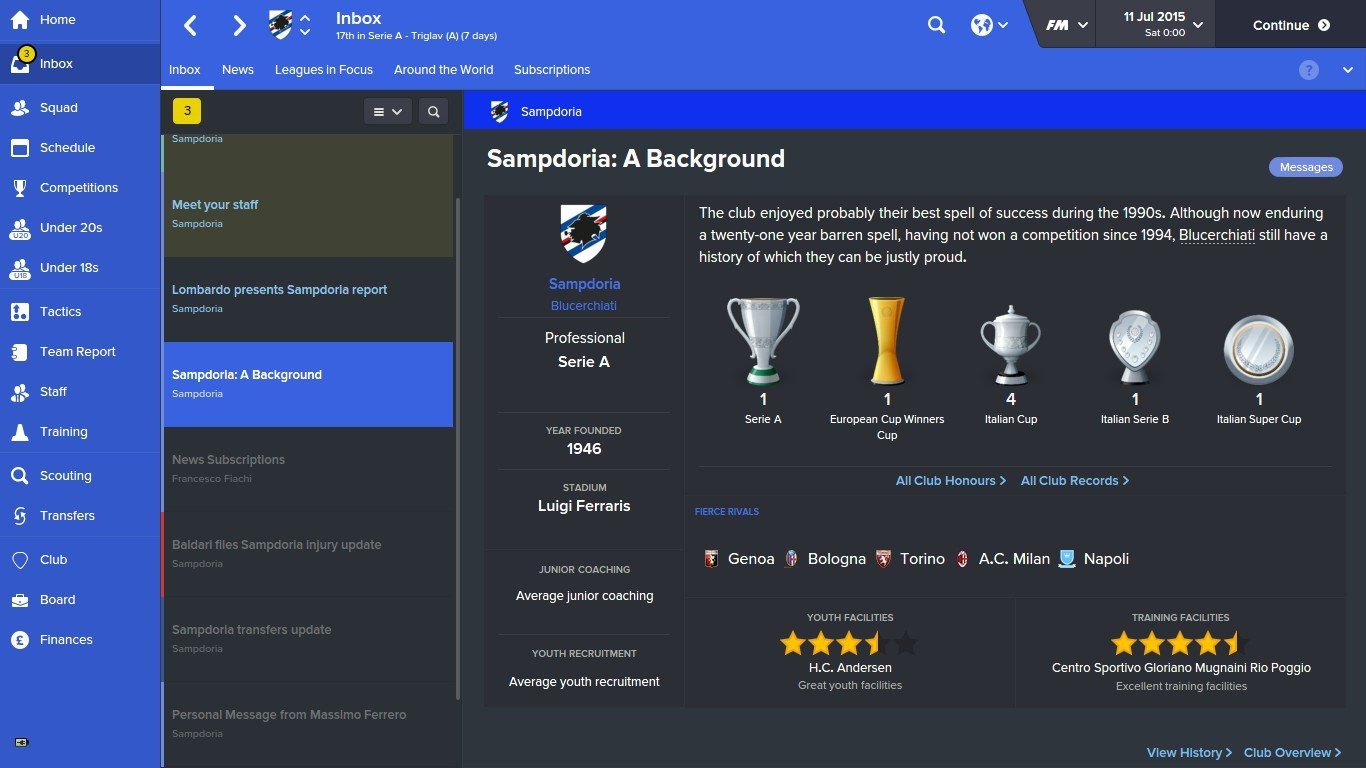 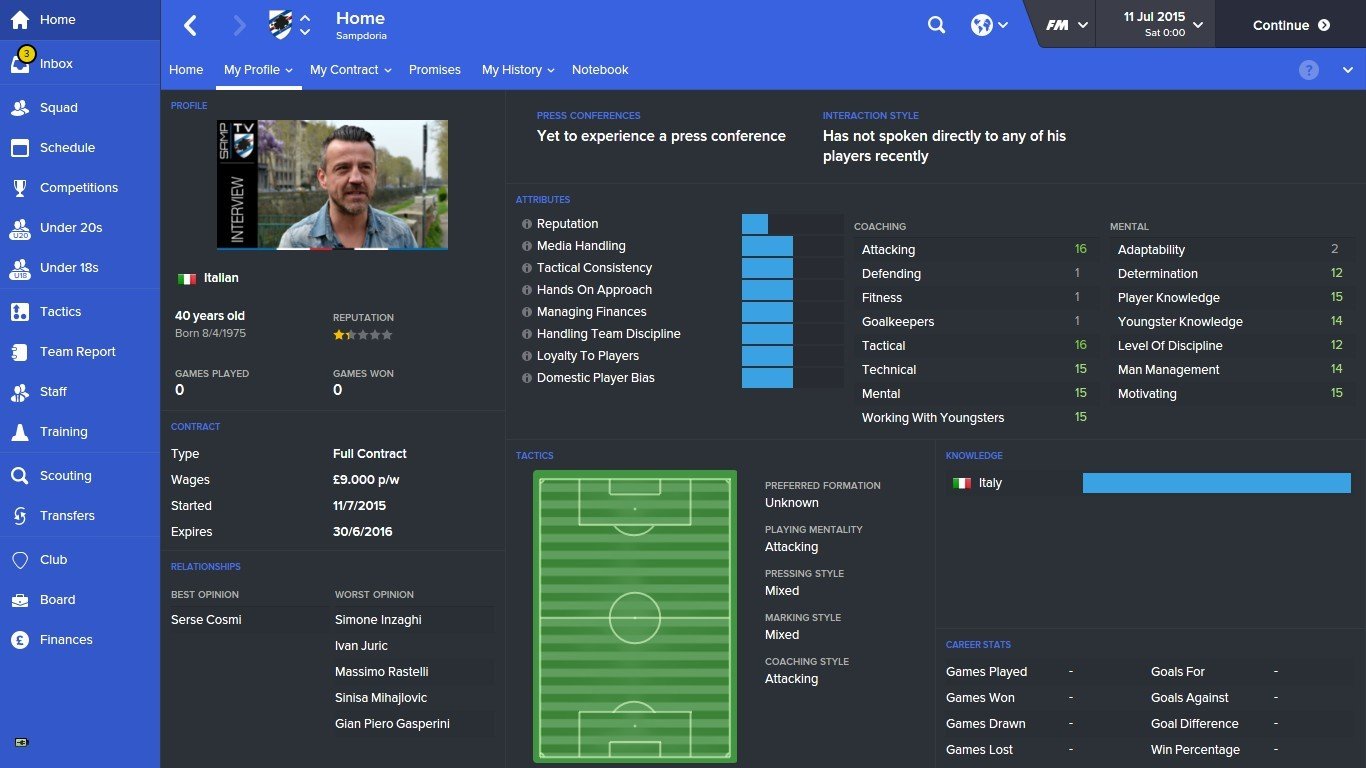 (open in a new tab for clearer viewing)
Login to Quote 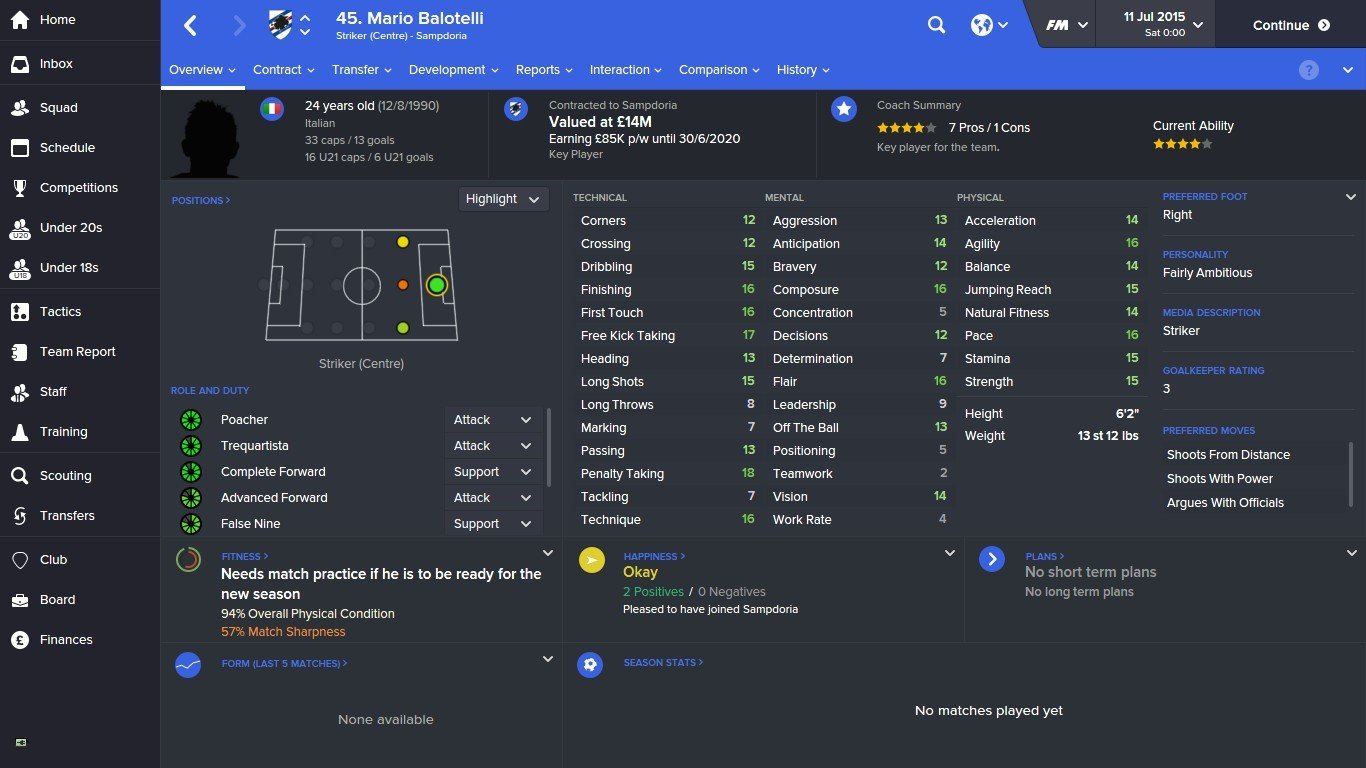 The Italy international, 24, has joined the 4 time Scudetto winning side in an apparent £5M Deal.

"I feel like someone who has put the first part of his career to one side. Played and lived like a boy," he said."I haven't forgotten how to play football. I am no longer a kid. I've wasted too many chances."

"Flachi was very convincing he said i would be the spearhead of the project he had in mind for Sampdoria moving forwards and now with this move I hope to improve my game physically, technically and mentally. Forza Sampdoria"

He scored only one Premier League goal for Liverpool after a £16m move from Milan in August 2014.

walkinshaw
4 years
Good luck with Balotelli mate, I have him at Lazio and he has been useless lol.
1
Login to Quote

thfc fm
4 years
Lol, put him in for the story purposes and thought it would be interesting to see how plays and develops in the team. Hopefully I get some better luck with him, would'nt bank on it though.

Sampdoria have appointed club legend Attilio Lombardo as their new assistant manager. This appointment comes only a day after the appointment of another legend Francesco Fiachi as Manager.

Lombardo made 201 appearences scoring 31 goals in his first spell as winger for the Blucerchiati playing Sampdoria's golden age between 1989-1995 where he won a Serie A, 2 Coppa Italia's, a Supercoppa Italiana and a Uefa Cup Winners Cup. He also got runner up medals in 2 Super Coppa Italiana's, a Coppa Italia and Uefa Champions League.
This is much better then Flachi did at Sampdoria as he only managed a Serie B during his time. Lombardo also managed Sampdoria reserves between 2002-2006 and has been assistant manager at Schalke, Galatasaray and Man City in the last 5 years

They did briefly play together for the 2001-02 in Lombardo's second spell which just lasted the season he made 34 appearances scoring 4 goals.

The appointment was made by chairman Massimo Ferrero. 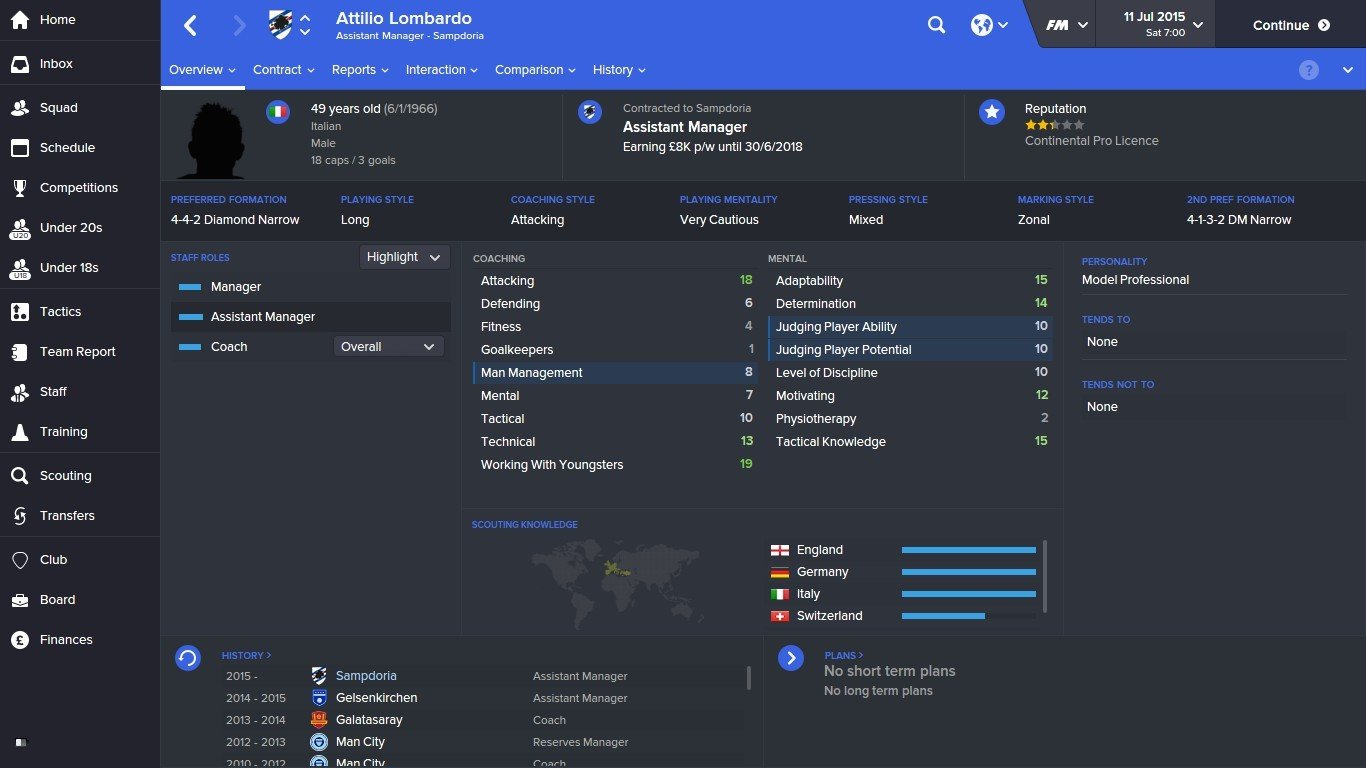 mgriffin2012
4 years
Good luck mate, I like Sampdoria have sold me a few good players but hopefully you can take them forwards!
1
Login to Quote

ScottT
4 years
Looking forward to seeing how this goes.
1
Login to Quote

ninjaskill
4 years
Good luck with Sampdoria, hopefully Balotelli can come up big for you. Cheap fee for him
1
Login to Quote

thfc fm
4 years
Thanks for the support! Updates later today
Login to Quote

YazanBluesLions2
4 years
Good luck with this save, and hope Balotelli returns to his good old days with your management!
1
Login to Quote

You are reading "Rise of the Blucerchiati".