Madsen is coming back from 6 months retirement

After 6 months in retirement at age 35, Oliver Madsen has made a comeback to football. Madsen signed for Oxford United in April to help them get promotion to League 1. At the end of the season Madsen had some health problems and decided to retire. Now that the doctors have helped him and Madsen is clearly healthy and happy now, he decided to get back to football as soon as possible.

We asked Madsen how it was to get back to management again. He answered '' It is great to be back. I have really missed it. Now i just need to find myself a new team. ''

Sources have told us that there is interest in Madsen. Aston Villa, Norwich and Blackpool have apparently contacted Madsen.

Where will Madsen go?

C.J.Lippo
3 years
Nice start mate, good luck where ever you end up!
Login to Quote

Zak: Thanks, and you will see alot more

Madsen signs for Blackpool FC on a 1-year contract


Madsen who just came back from retirement, has already found his club, and it looks good for his reputation.

Blackpool FC have confirmed that former Oxford United manager Oliver Madsen will replace Gary Bowyer as manager, having signed a one-year contract with the League 2 side.

A statement made by the club this afternoon said: “Blackpool Football Club is happy to announce the appointment of Oliver Madsen as its new First-Team Manager.

The 35 year-old, who has agreed a one-year contract with the pool, takes charge ahead of the first team’s return to training soon

The Blackpool FC chairman has said that he is happy that Madsen said yes to the job and hope he can get the team back on track after their horrendous past 3-4 seasons.

In the 10/11 season Blackpool got promoted to the Premier League for the first time. Since there they have just gone downhill. And in the 15/16 season Blackpool FC got relegated from the League 1, which means they will be in League 2 in the 16/17 season.
Login to Quote

MJK46
3 years
Damn dude that is going to be a challenge for your first job. Good luck
Login to Quote


A bit about Blackpool FC:

Blackpool Football Club is a professional association football club based in the seaside town of Blackpool, Lancashire, England. For the 2016–17 season, they are competing in League Two, the fourth tier of English football. Founded in 1887, Blackpool's home ground has been Bloomfield Road since 1901. Their main nickname is the Seasiders, but they are also called the 'Pool and the Tangerines, the latter in reference to the colour of their home kit, which is often referred to as orange.

Blackpool's most notable achievement is winning the 1953 FA Cup Final, the so-called "Matthews Final", in which they beat Bolton Wanderers 4-3, overturning a 1-3 deficit in the closing stages of the game.

In their first-ever Premier League match, Blackpool defeated Wigan Athletic 4-0 at the DW Stadium. On 27 January 2011, the Premier League fined Blackpool £25,000 for fielding what they believed to be a weakened team against Aston Villa on 10 November. Ian Holloway, who initially threatened to resign if punishment was dealt, had made ten changes to the team for the fixture. The club had fourteen days to appeal the decision,but chose not to.

So as you can see, Blackpool FC needs a lift. On 5 years they have been from being a Premier League side to being a League 2 side, which is pretty damn bad.
Login to Quote

MJK46
3 years
Nice background on the club man!!! Can you get them to the Premier League within 5 years??
Login to Quote

mgriffin2012
3 years
Great start man! Welcome back, am looking forward to this one!
Login to Quote

Oliver Madsen starts his first full season in charge of Blackpool FC away to Taastrup FC in a friendly.

Win Promotion: I believe that expectation is fair and to be fair, i HAVE to get promotion to even be happy about our season. We dont have a good squad for someone who just got relegated to League 2, but we will work on it. I'm saying only 4 losses in a whole season. 4 LOSSES!.

Reach Third Round: I never have many expectations to the FA Cup, as we will enter it late on the season, and i want to focus more on the league and possibly the EFL Cup

Reach First Round: We will definitely do that, unless we come against a really good team. I wanna win the EFL Cup, i repeat. I wanna win it! My primary objectives is the league and this cup, because its simply a fast tournament in the start of the season, which is good for our squad.
Login to Quote

In all seriousness, good luck mate take them back to the glory days of the Premier League.
Login to Quote

mgriffin2012
3 years
Think your Blackpool squad is more than capable of achieving its aims!
Login to Quote

OlleM13
3 years
Squad ratings and opinion on the squad 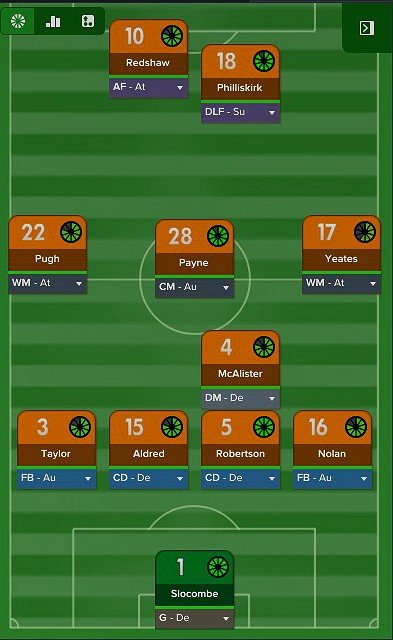 I think we need a starting goalkeeper, those 2 we have now, are good as backup.. But not more than that.

We have nice quality on the center back position. Also nice backups, no need for anything there.

Many players on this position too. Have one quality Left back, and an ok backup. So it wont be one of my most important positions to sign people on.

A position we need to be better on. We have a good backup if we just get one quality defensive mid.

Again, need one quality Right Mid... Many players who can play that position, but no quality ones...

Probably our best position quality and depth wise. Wont touch that position at all.

As said many times before, just need one quality player and it will be fine.

Could buy one striker, but wont be mad if we dont. 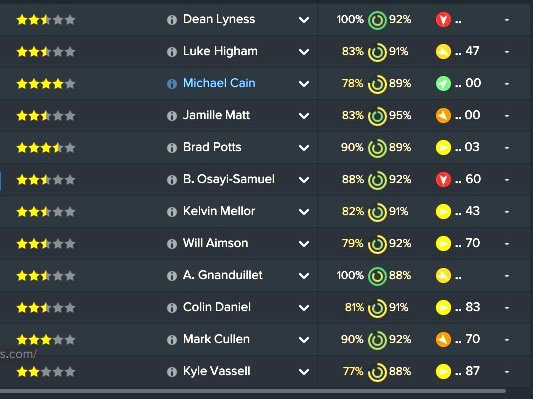 Decent reserves... I cant complain, and it will be even better when i get some signings up.

We have an alright squad... Wont say the best but of course i will get some signings on and hopefully we will do good in the season :)
Login to Quote

You are reading "Oliver Madsen: The Comeback".