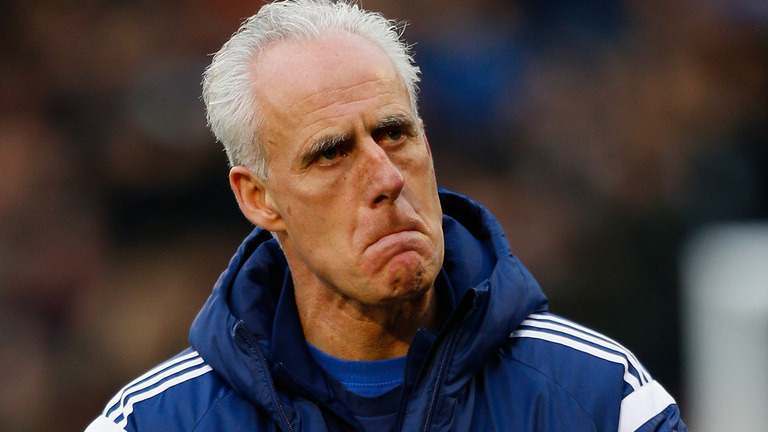 "The club would like to place on record its sincere thanks to Mick for all his efforts during his long stay at the club and wish him well in the future."

"Terry Connor will take over as acting manager until the club appoints a new manager. There will be no further comment from the club at this stage."

Former Crystal Palace man Alan Pardew is understood to be favourite in replacing Mick McCarthy, although many bookmakers are backing ex England boss Roy Hodgson to take the hot seat at Portman Road. However the future of Mick McCarthy is unknown at this present time.
Login to Quote

MJK46
5 years
Good luck man!!! I will be reading this!
Login to Quote 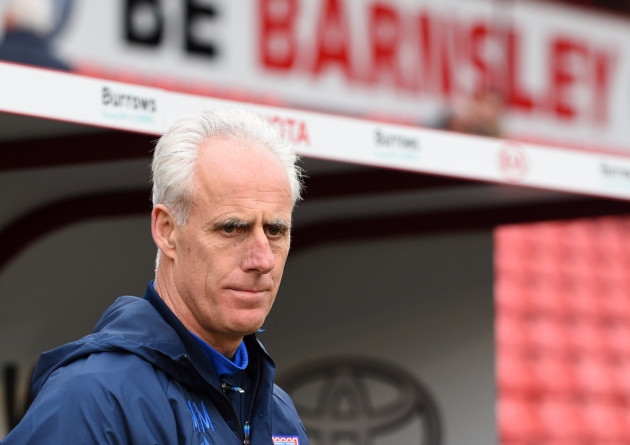 Barnsley have confirmed that Mick McCarthy will take the hot seat at Oakwell for the 2016/2017 season. The south Yorkshire club are delighted to welcome the ex player and local hero in to the club.

"This club has a great history and tradition and I am proud to follow in the footsteps of legendary Barnsley managers,"

"I have always wanted to end my managerial career at Oakwell, my home. I'm glad the club have offered me this chance days after leaving Ipswich." Said McCarthy.

Barnsley's chairman Maurice Watkins said: "We are delighted to welcome Mick to Barnsley. As i am and many at the club are close friend with Mick from his time here as a player, we knew he was the man for the job."

"He is a man of great experience and authority and the board has no doubt he will help us achieve our long-term goals. I would like to thank the Barnsley supporters for making Mick feel welcome back at this wonderful family club"
Login to Quote

The young Welshman Davies will be the number one for the start for the season, a well-rounded goalkeeper, however this maybe an area which will be strengthened during January which may see Townsend go out on loan for some vital experience.

Both talented youngsters with bags of potential however both players come in on loan from Celtic and Everton and signing these in the future looks unlikely.

A strong core at the back however not much experience at high level championship among these players, which may be a downfall to our season.

One area of the squad which I am happy with, some good players occupying these positions. However, the young Australian Callum elder may not see as much game time as the others.

3 strong players for this division, Mowatt is a star in the making for this team. The highly rated Matty James on loan from Leicester will be pivotal to this side for the upcoming season.

Many options up the right-hand side of the field, and lots of potential in this area of the pitch. However, a lack of experience is in a abundance.

One area which will be looked to improve during preseason. However, George is a capable player and has bags of ability.

Hammill will be first choice with plenty of experience around this level and he will hopefully help the younger guys progress and improve as players.

A wonderful young player who is already rated highly, however he came with a hefty price tag. John Will not be able for selection for up to 4 month due to blood clot.

A much-needed experienced head to slot in with the array of youngsters on display at Barnsley.

A loan transfer to bolster the defence out and add more competition for places. A very able player in this position and definitely one for the future in England.

Another big transfer payed out for a team like Barnsley even though Kwesi record doesn’t look all the best I know he can fire for Barnsley and he will slot nicely in to that attacking midfield role.


On the outs, young full back Callum Evans has joined Torquay on a 6 month loan deal

A good chance to assess the players, some wonderful goals to report. But it’s time to look forward to Derby on the opening game of the season.
Login to Quote

1’ Derby get the game under way
24’ Strong possession based football gets Barnsley into Derby’s final third, a low through ball from Janko sees Watkins one on one with the keeper but a brilliant save from Carson keeps the hosts at bay
45’ Final seconds of the first half sees Derby holding the ball in the middle of the park

HT Barnsley will be disappointed with that first half, the better side on the day being held

46’ Armstrong gets this second half underway
47’ A hanging corner from Derby test the Barnsley defence but Sheaf is able to clear the ball
57’ GOAL! Wonderful hold up play from Appiah on the edge of the Derby box gives Watkins the chance to make a storming run up the field and latch on to a through ball and place the ball in the near corner
58’ Double substitution for Derby as Nugent and Forsyth leave the field being replaced by Vydra and Ince
61’ GOAL! Appiah hits it from 20 yards into the top corner and leave Carson rooted to the spot
62’ Substitution for Derby as Blackman enters the field for Olsson
64’ James loses possession on half way which sees a quick counter attack come to nothing with Hughes hitting it well wide
71’ Double substitution from Barnsley as Mowatt and Hammill leave the field and Scowen and Lee join the action
75’ GOAL! A quick freekick down the right-hand edge sees a low cross from full back Janko into the feet of Armstrong who has the easiest tap in of his career to put the host 3-0 up
78’ GOAL! Fast play sees a well worked goal by Russell who slotted the ball past the Barnsley keeper
92’ A late barrage of chances from derby comes to nothing and sees Barnsley clear the ball and the final whistle sounds.

FT’ 3-1 Barnsley. What an opening day for newly promoted Barnsley. Kwesi Appiah being the pick of the bunch adding a goal and assist to his 16/17 tally

sure was, got the right tactic straight away i think
Login to Quote 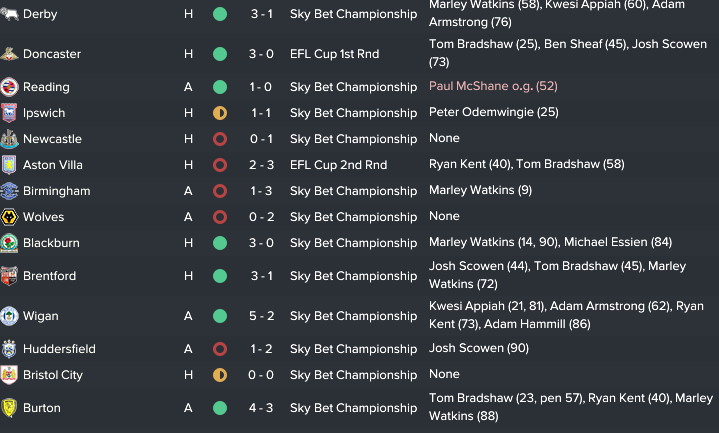 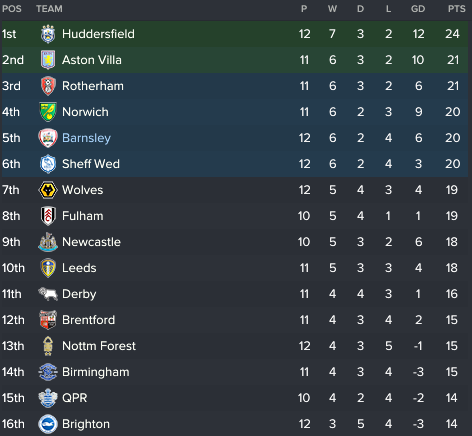 This was defiantly the start that i needed and what the boys needed to get us kick, with early predictions that we would be relegated, I am a pleased with how we kicked on from that opening say win. We have proved that we can score for fun however we also can concede several soft goals giving us some questionable defeats. Losing in the EFL cup hasn't affected the boys as we know avoiding relegation is the main objective.

Next up is a big South Yorkshire derby against Sheffield Wednesday. A win could send the morale of the lads sky high.
Login to Quote

MJK46
5 years
That losing streak sucks but you look to have the team set for the season in the promotion zone!!
Login to Quote

Them games, we dominated but couldn't defend if our lives depended on it
Login to Quote

1’ Bradshaw gets the game underway
12’ A lofted through ball from Scowen sees Bradshaw one on one with the keeper however he wastes the attack by hitting it straight at Westwood
21’ GOAL! A swinging free kick from the right-hand edge of the box sees MacDonald rise above the rest and a bullet header finds the top corner of the goal
27’ RED CARD! A rash sliding tackle by Essien alerts the referee and he gets his second yellow of the game. Barnsley make a tactical change as Williams leaves the field and is replaced by Mowatt
29’ GOAL! Jones whips a corner to the near post leaving an easy tap in for Duarte to level the game
40’ GOAL! Wonderful passing play from Sheffield as Abdi plays a simple ball through for Adelaide to latch onto and he slides the ball under a diving Davies
45’ Sheffield substitution. Rodrigues limps from the field and he is replaced by Hooper
46’ GOAL! Final seconds of the first half and a wonder goal from Scowen as he strikes the ball perfectly from the edge of the box

46’ Fletcher gets this back underway. A quick attack sees the Owls get a corner which comes to nothing
58’ Substitution for Barnsley as Watkins makes way for Hammill
66’ Lees leaves the field for Sheffield and he is replaced by Loovens
67’ Fletcher is dispossessed in the Barnsley box and a fast counter attack from Hammill ends in a Sheffield goal kick
68’ Sheffield waste the best opportunity of this second half as Mcmanaman hits the ball directly at the Barnsley keeper
70’ GOAL! The ten men of Barnsley play simple football to get the ball to winger Kent who plays a low cross onto the foot of Hammill and he slots the ball home
71’ Sheffield use their final substitution as Lee is replaced by Hutchinson
93’ Barnsley hold the ball successfully and the referee blows to signal full time

I didn't know Michael Essien was available to Championship teams, some fantastic results in there mate - really pushing Barnsley above their weight!
Login to Quote

I didn't know Michael Essien was available to Championship teams, some fantastic results in there mate - really pushing Barnsley above their weight!

TBH essien hasnt been the best and im shocked with the results!
Login to Quote