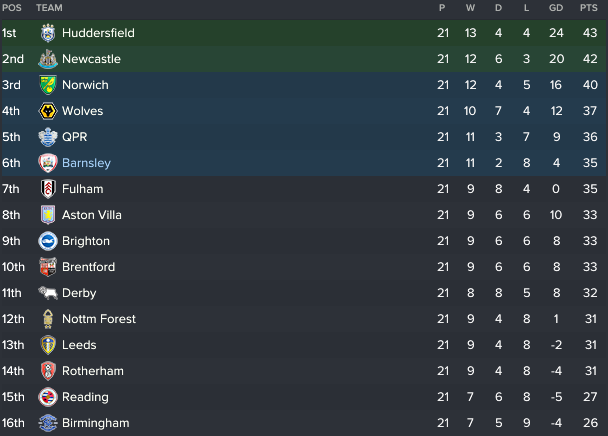 This run of games, the lads have shown me what they can do. I feel we will be staying up this season. However i'm still weary about our defence at times. But in many games the defensive blunders have been covered by our fast couter attacking football.
Next up we welcome our rivals Leeds to Oakwell

MJK46
4 years
Sucks seeing you get shutout. Hopefully in the next update there are greens and yellows only
Login to Quote

1’ Leeds get the game underway
2’ Early chance for Leeds as Roofe rattles the post from close range
42’ Watkins is dispossessed in the middle of the park by Antonsson who makes a storming run through the standing Barnsley defence, however the attack comes to nothing
45’ A clearance from Davies sees the man in the middle blow the whistle and signal for half time

FT An evenly matched game is fairly represented by the 0-0 score line, both teams had chances to take the lead however poor finishing meant the teams will share the spoils

MJK46
4 years
So many chances there but with all those losses you had early on this draw doesn't seem so bad.
Login to Quote

Michael
4 years
Come on, get that promotion

Id love for that to happen
Login to Quote 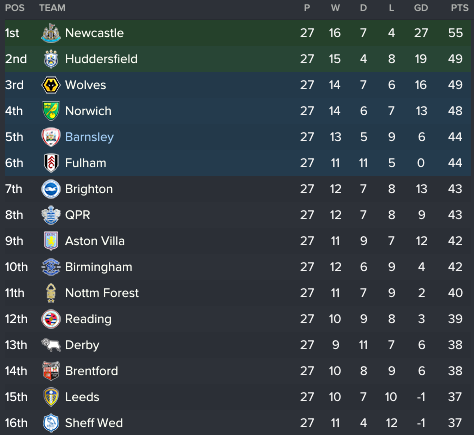 It has been another run of amazing games, with only one loss i think were improving as a team after every game. Were still up top with the big boys but anything is possible and the championship is always a well open league.
Next up we welcome Chelsea to Oakwell in a FA cup 3rd round match. This is our chance to show everyone what we can do and cause a giant killing!
Login to Quote

Michael
4 years
Well, I hope you win over CH€£$€A
Login to Quote

MJK46
4 years
Much better results there man
Login to Quote

ScottT
4 years
Great month, very much overachieving with Barnsley. You're staying up, so there's the aim done already so perhaps the next aim is to keep on doing what you're doing and remain in the playoffs.
Login to Quote