Antwerp is the oldest club in Belgium, as stated above.
They were founded in 1880.

Antwerp plays in the 2nd division in Belgium (irl they promoted this season).
They haven’t been able to promote for 12+1 years, and this has always been the target.

2 years ago, Antwerp got a new owner. Paul Gheysens from “Ghelamco” (hey? Isn’t that the stadium name of AA gent? Yes. Yes, it is. The builder of the Gent stadium, is now the Antwerp owner.

The main rivals are Club Brugge and most importantly: Beersch*t-Wilrijk.
As you may have noticed I wrote “12+1” instead of the actual number, the person who finds out why, will get a standing ovation.

Antwerp play at the Bosuil stadium in Deurne-Noord, the people who have been there will confirm that, although it is very old, it’s still a charming stadium. The atmosphere in this stadium is almost legendary. I recommend you visit if you are in Belgium.

Now you have met Antwerp, it’s time to play some FM, the first season will be up tomorrow.
Wish me Luck.
Login to Quote

mgriffin2012
3 years
Best of luck mate, hopefully Antwerp will be back at the top before too long!
Login to Quote


From the moment the first training kicked off, we all knew. THIS would be our year, the board knew, the players knew, I knew.

But most importantly, the fans knew. They welcomed the players to “The hell of Deurne-Noord”.


We had a pretty good squad, mainly in defense I had some problems because Maxime Biset and Steve Colpaert were old already. I personally always preferred a young squad.

Edson and Allasane Diaby are 2 new centrebacks. They will be the main duo this season.
Patrick Asmah is a new left-back
Matheus Batista is the new Defensive Midfielder
Those are the most important tranfers IN

The most notable transfer out is Bjorn Vleminckx, as he had a very expensive contract I had to get rid of him. The same goes for Fabien Camus.
The other transfers out were just Deadweight and unnecessary contracts I had to get rid of 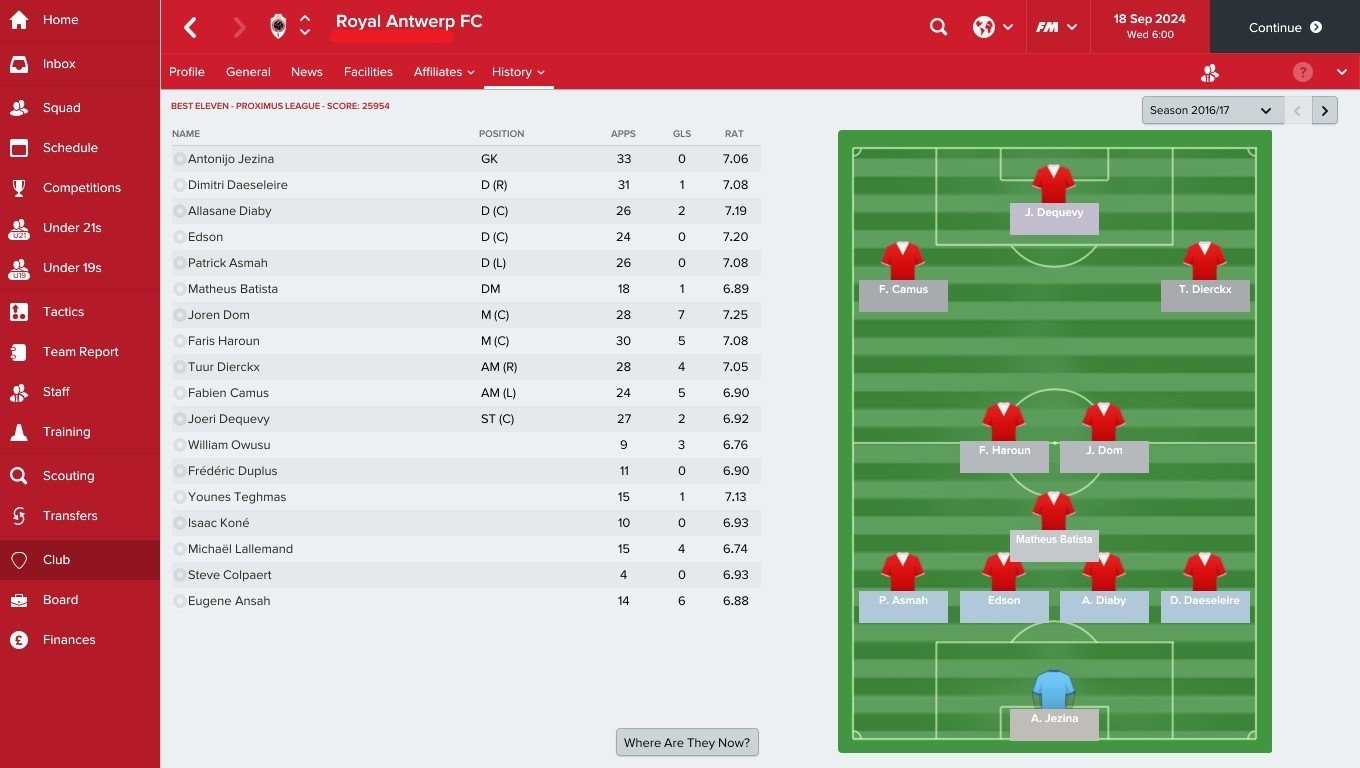 [/url]
As you can see I played a 4-5-1 with a DM and wingers. I thought this would work best as it is a competition where everyone can beat everyone.
Normally my preferred tactic is a 4-2-3-1, but not for this season.
Tuur Dierckx would be the main winger along with Dequevy (not Camus as on the screenshot).

in front of them there would be a rotation between Michael Lallemand, Eugene Ansah and William Owusu. We did not have 1 star striker that season.

In centre Joren Dom and Haroun would almost start every game, Haroun as Ball winner and Dom as Central Midfielder.
Matheus Batista would be the main DM.
Edson, Diaby and Daeselaire will be the other defenders.
And Jezina number 1 Keeper.


Enough with all the technical stuff, the season begins. We had an amazing season, destroying any resistance we had. The Great old would promote. We didn’t even need the final games (which would have come in handy, because now our season ended at the end of February. 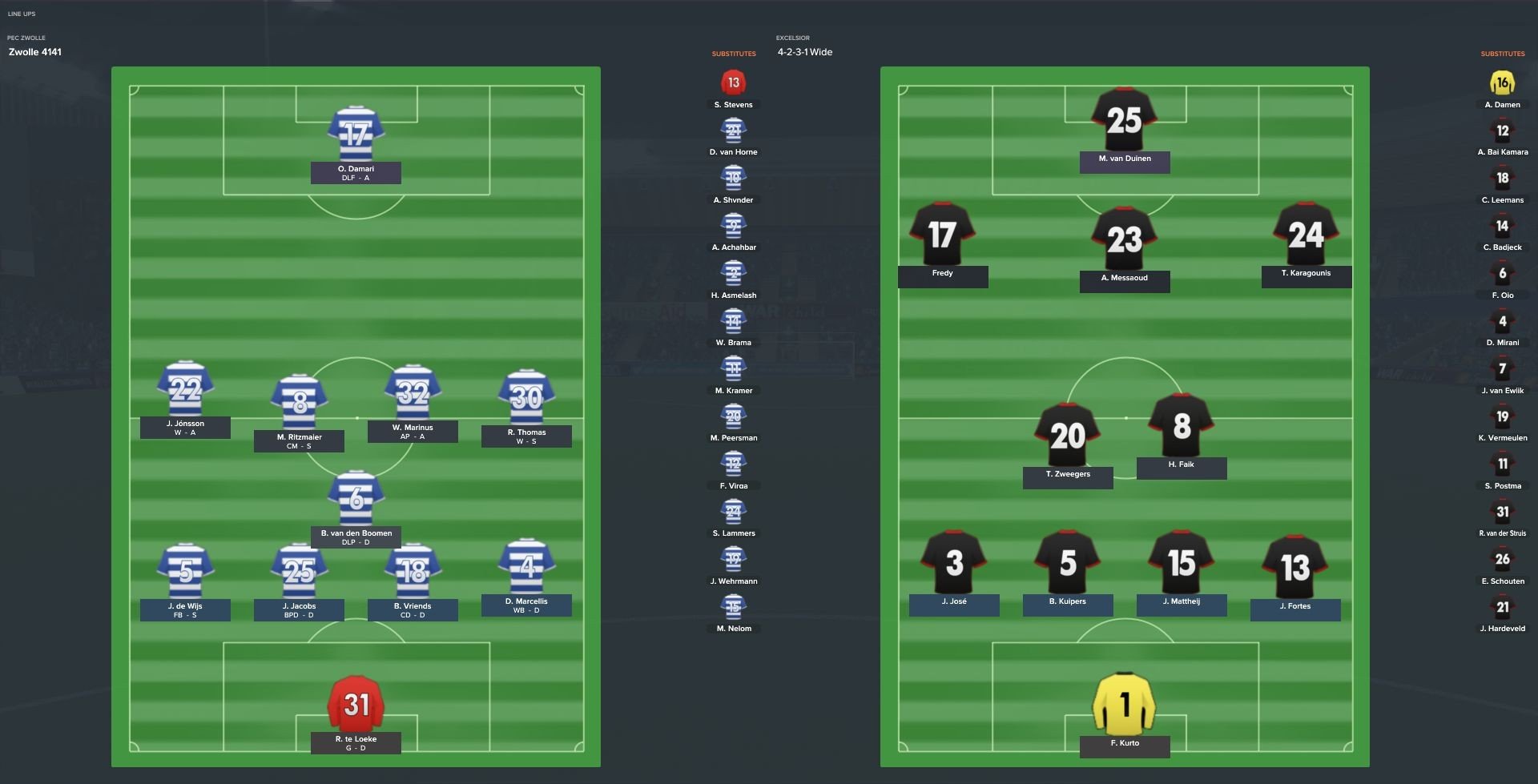 
Man I remember this cup, it had me beat my keyboard multiple times. With a 2-1 win against 1st division team SV Zulte-Waregem we managed to get in the quarter finals.

in the Quarters.
we got.
Kicked.
out.
By.
R Union SG
Yes. Yes this is the team that ended 6th in both periods. Man, I was angry

As the fans kicked off the season, they would also end it, in style!

I know these updates aren’t perfect.but from the moment I get you guys up to speed, I promise it will be a lot better 
Login to Quote

mgriffin2012
3 years
I wont pretend to know a lot about your transfers but it seems you've had a great season!
Login to Quote

Yhea i have an idea to do the next seasons a litlle better. 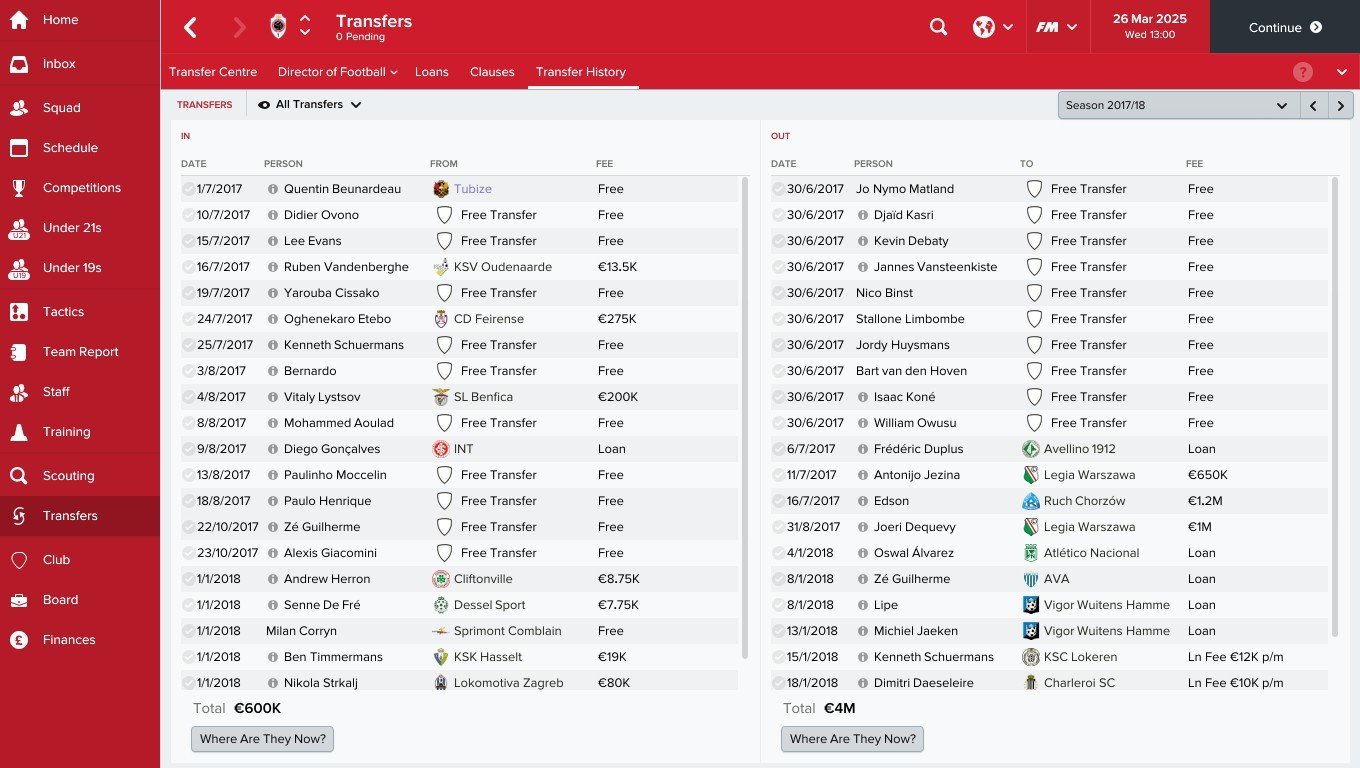 The first main transfer in is Quentin Beunardeau. As I sold my 2 goalkeepers Kevin Debaty on a free and Antonijo Jezina for 850k (at that point an offer I couldn’t refuse).
Didier Ovono was also signed but he is the back-up keeper.
In januari Beunardeau was sold for 1Million to Legia so Ovono became the main keeper.

Lee Evans was an absolute steal, the young central midfielder joins on a free.

The best transfer is undoubtedly the one of Etebo, he is an absolute beast. ( well at least for that price.

Vitaly Lystsov is the last big signing, he is a central defender,

Go to “Squad” and there will be screenshots of these players. 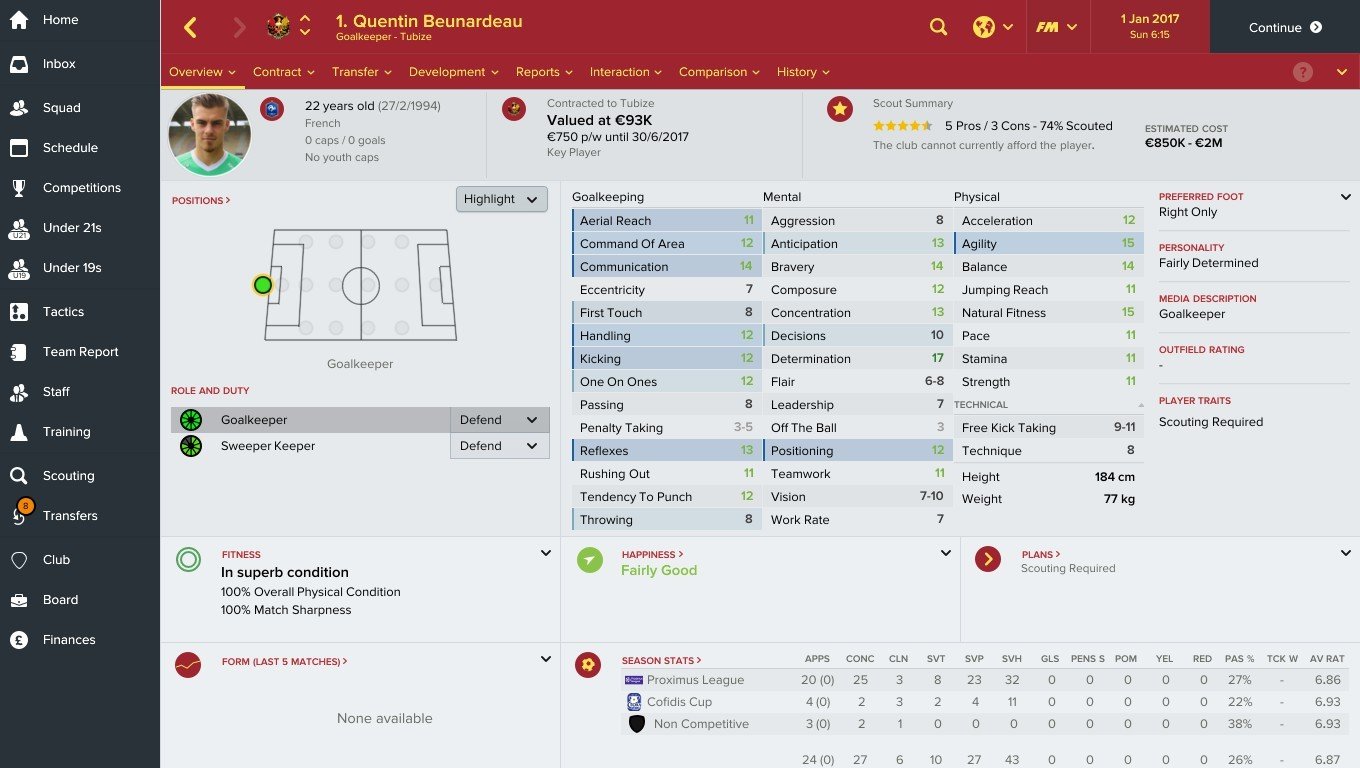 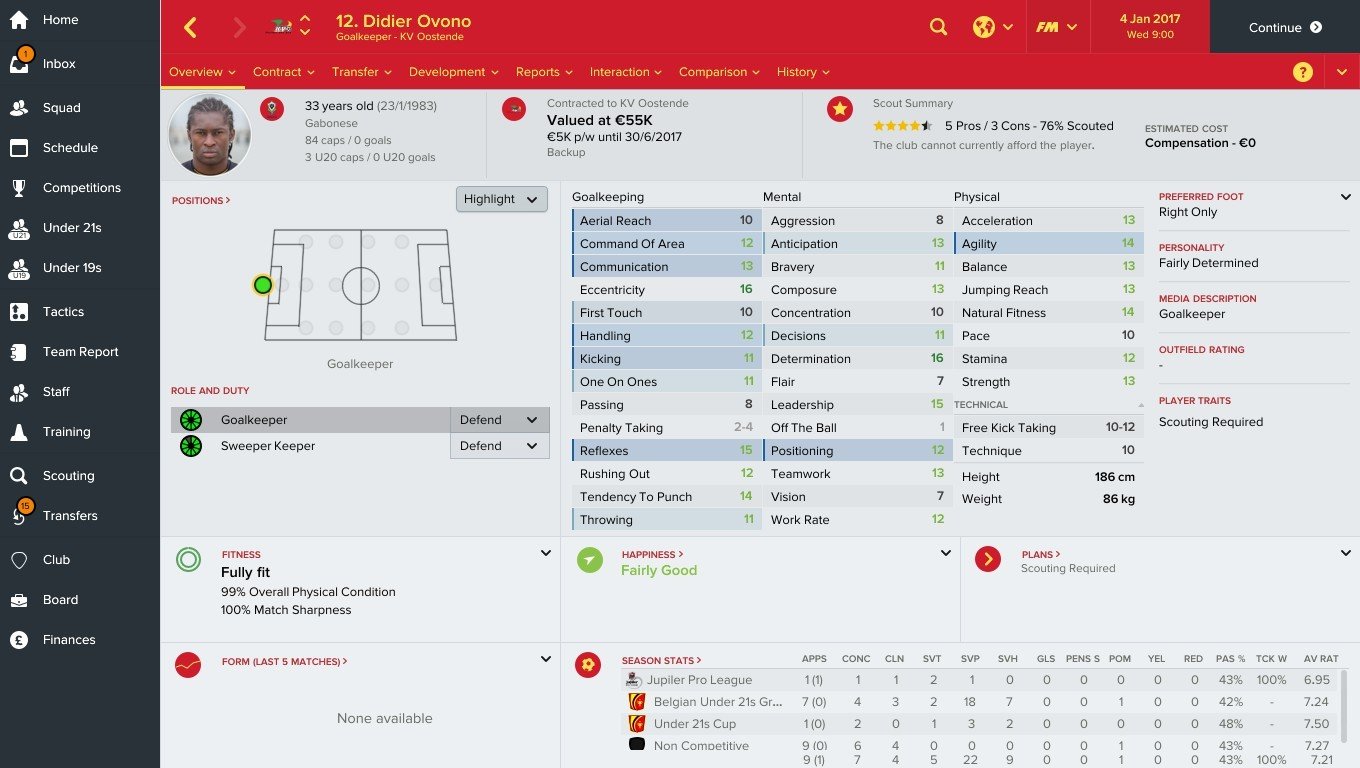 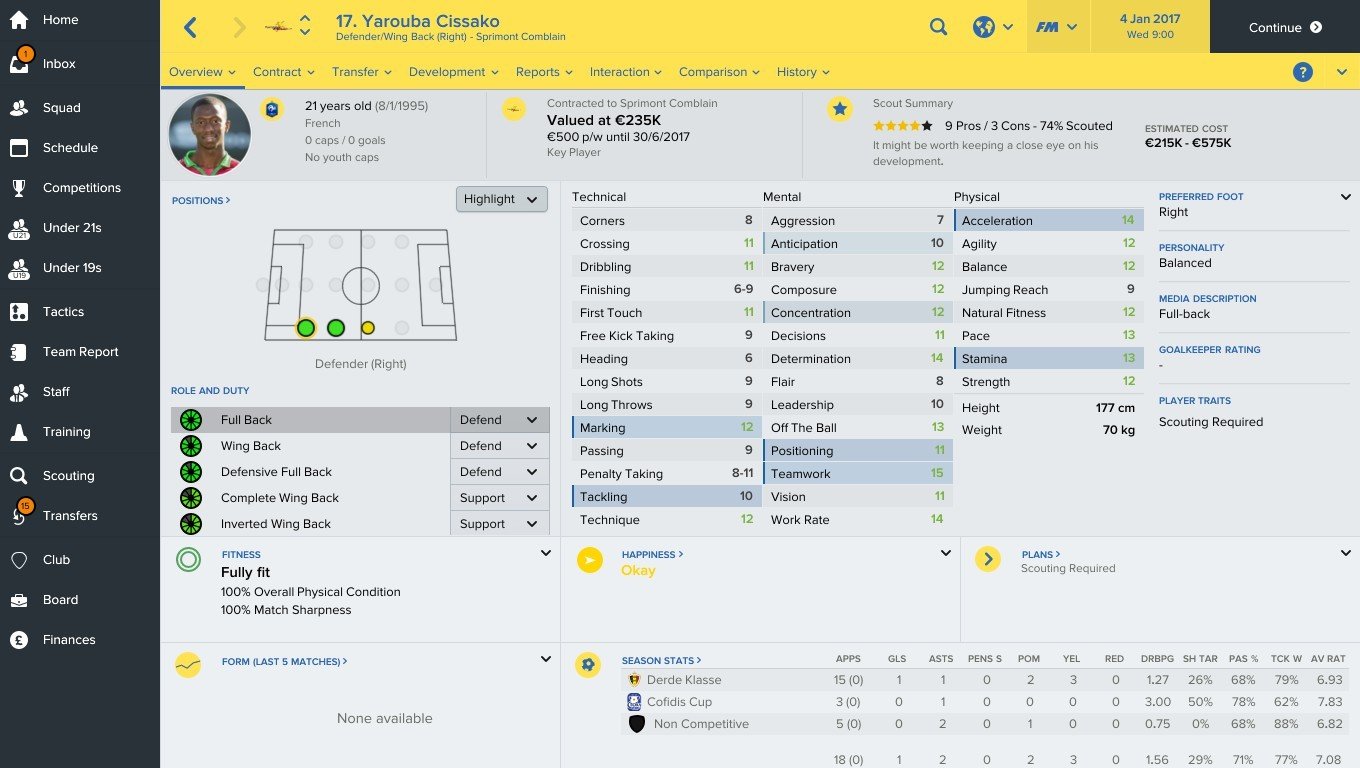 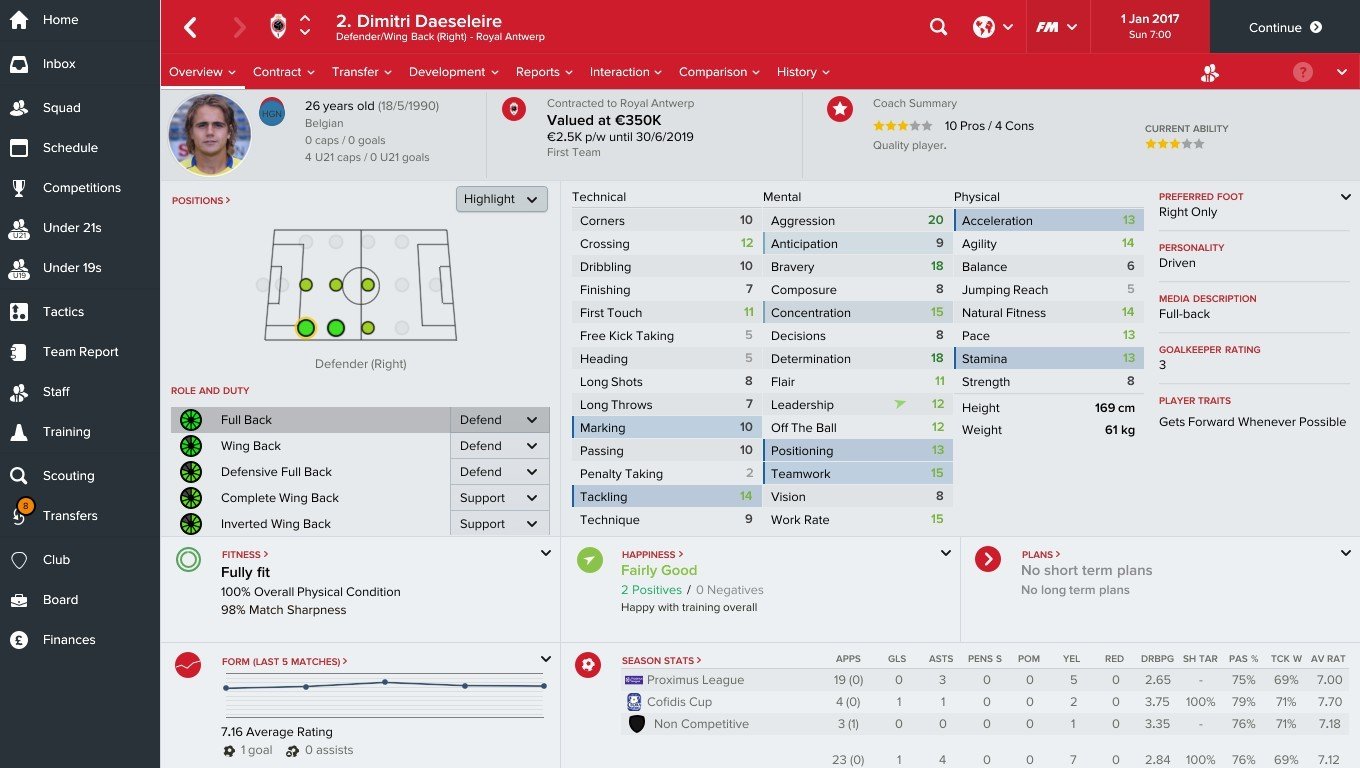 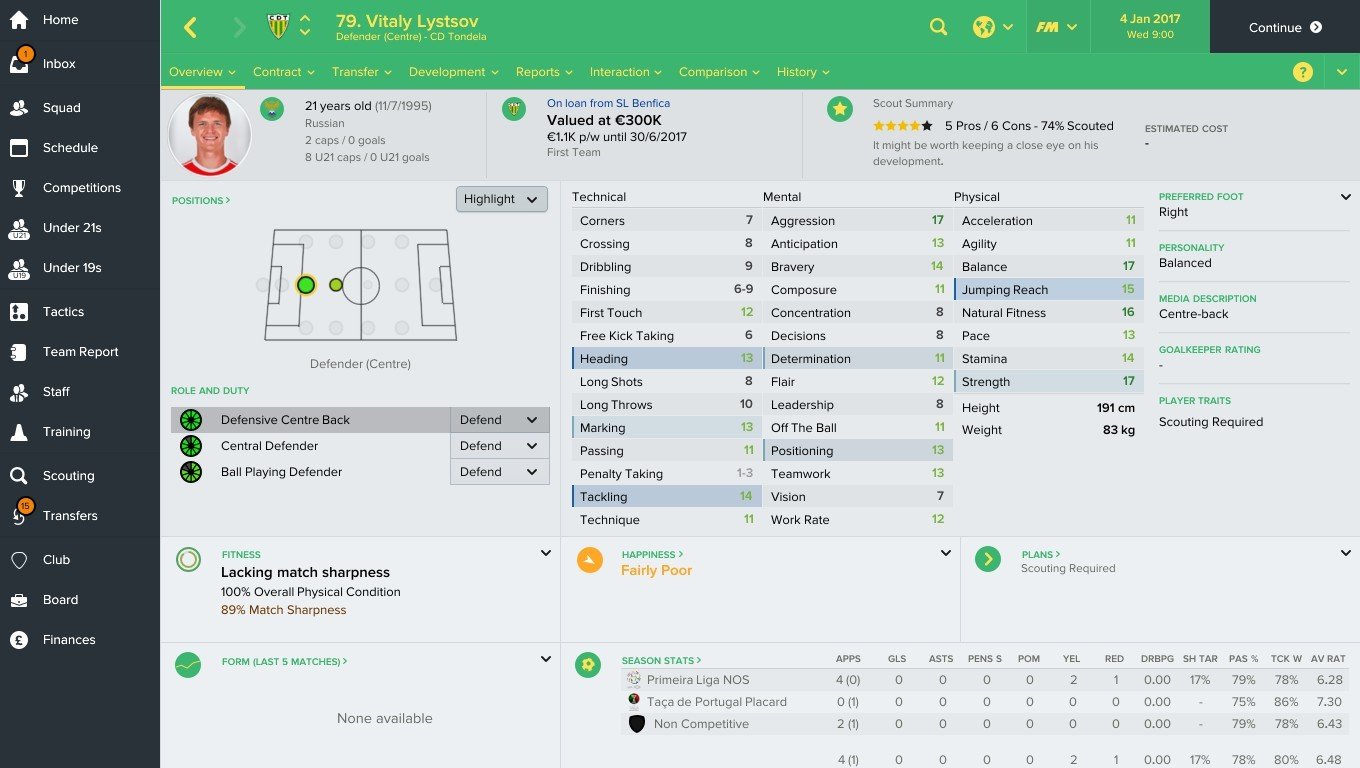 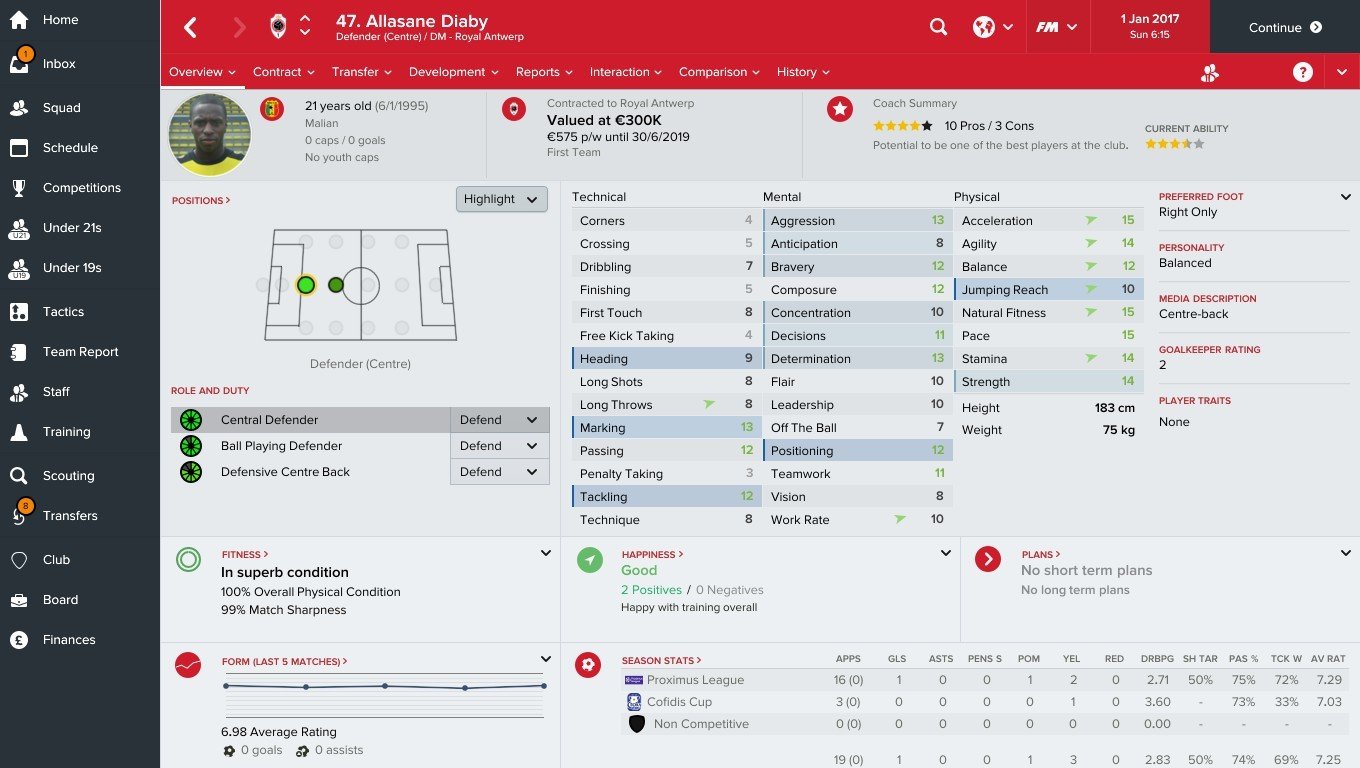 Ruben Vandenberghe and Kenneth Schuermans were also in the squad but they barely played so no screen. They were in the squad to get past the “6 players homegrown”-rule 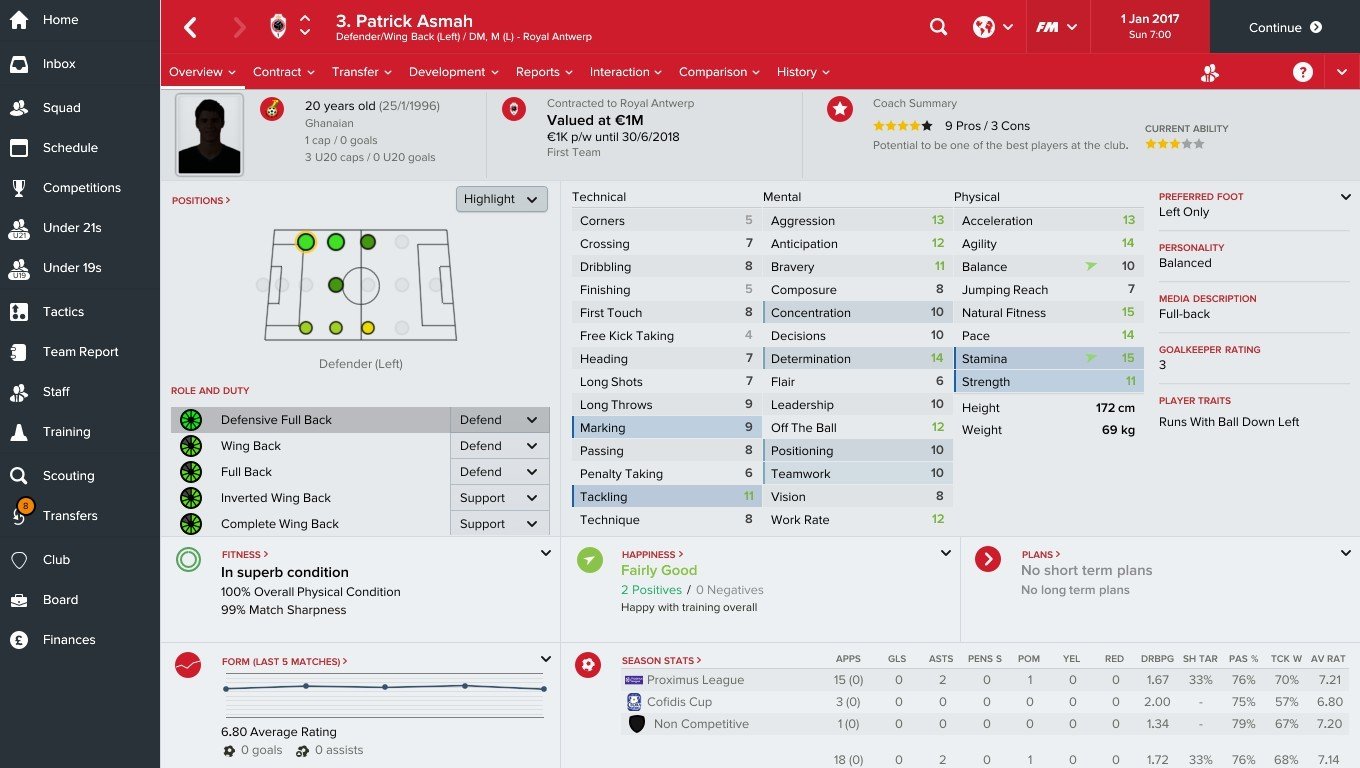 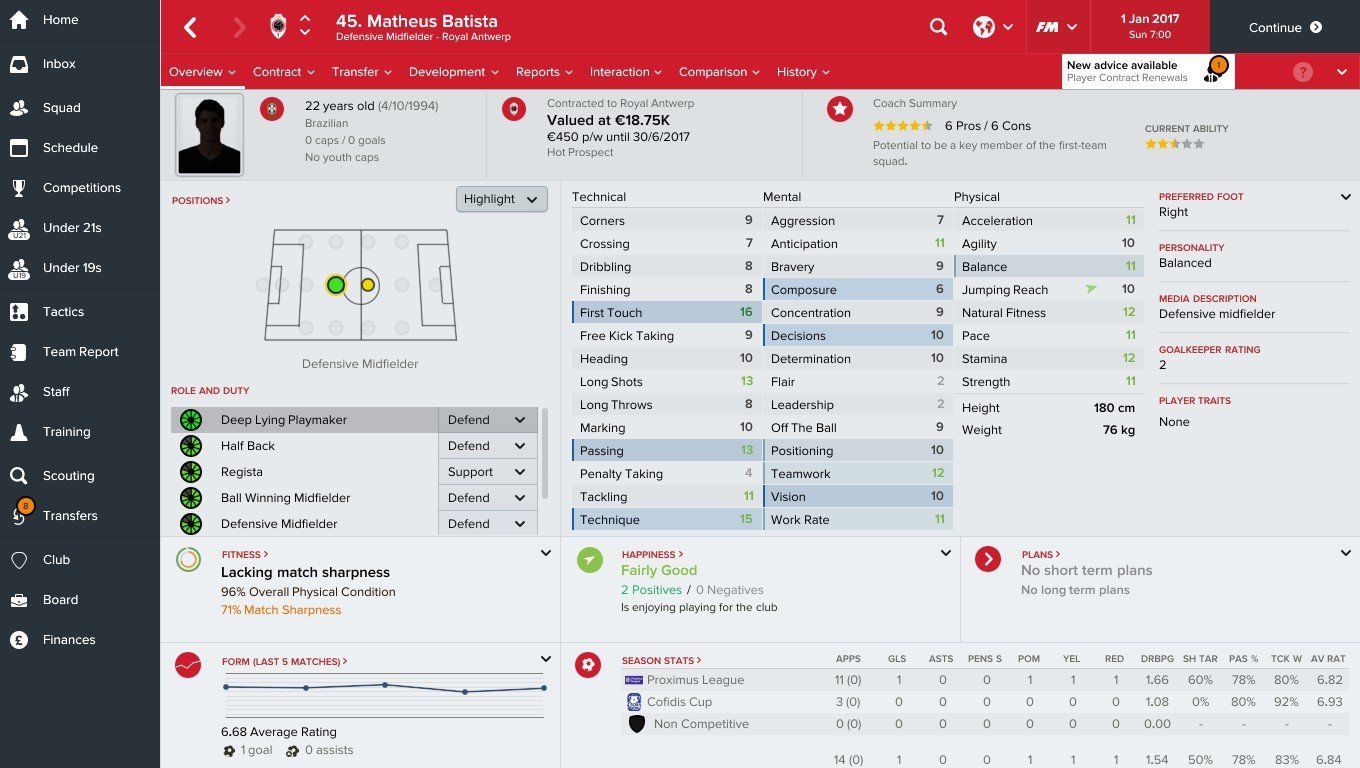 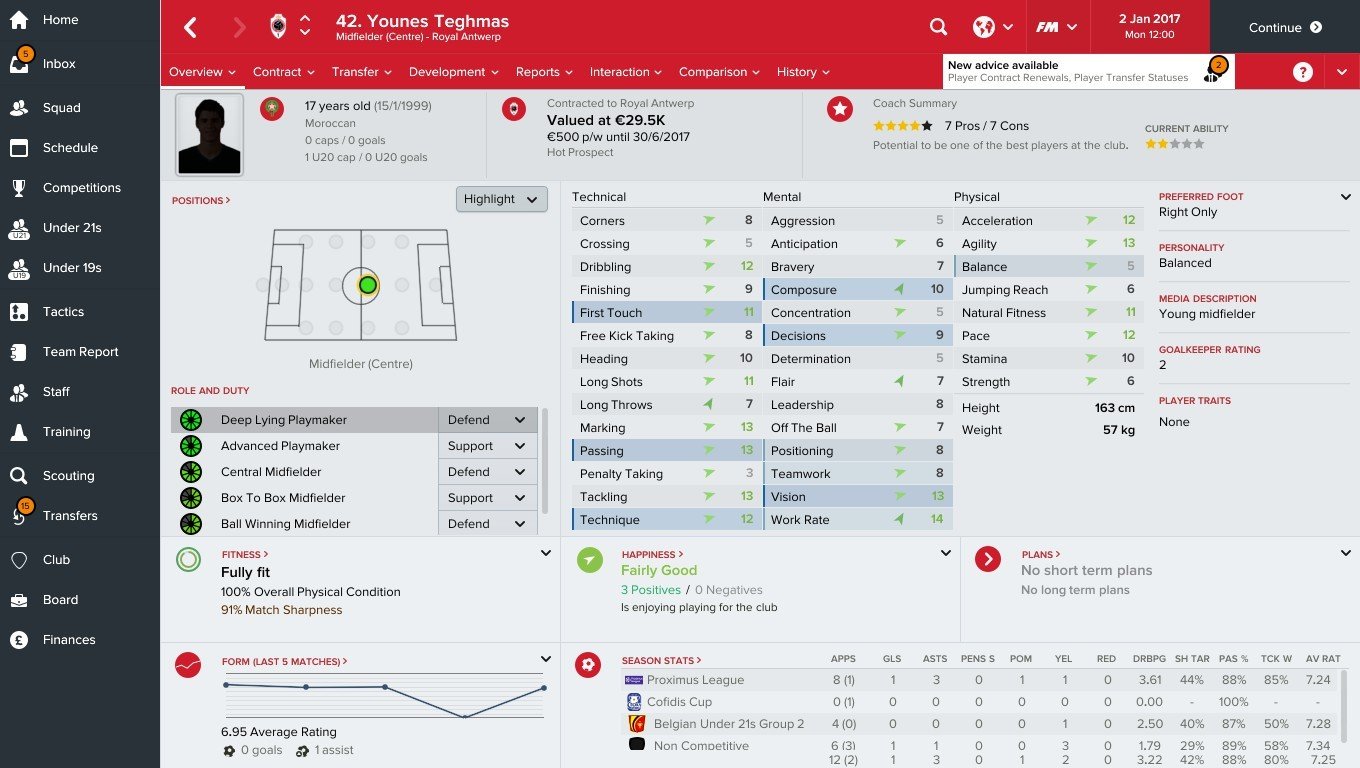 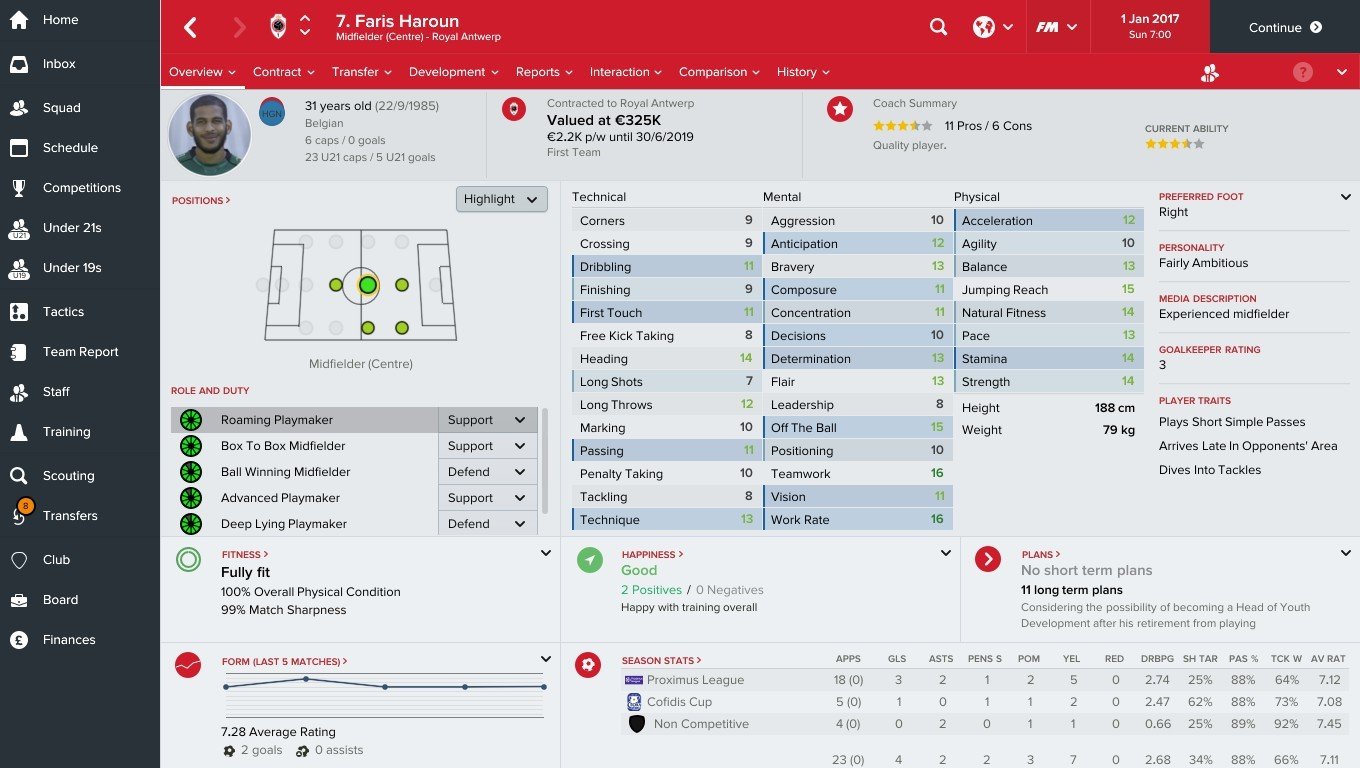 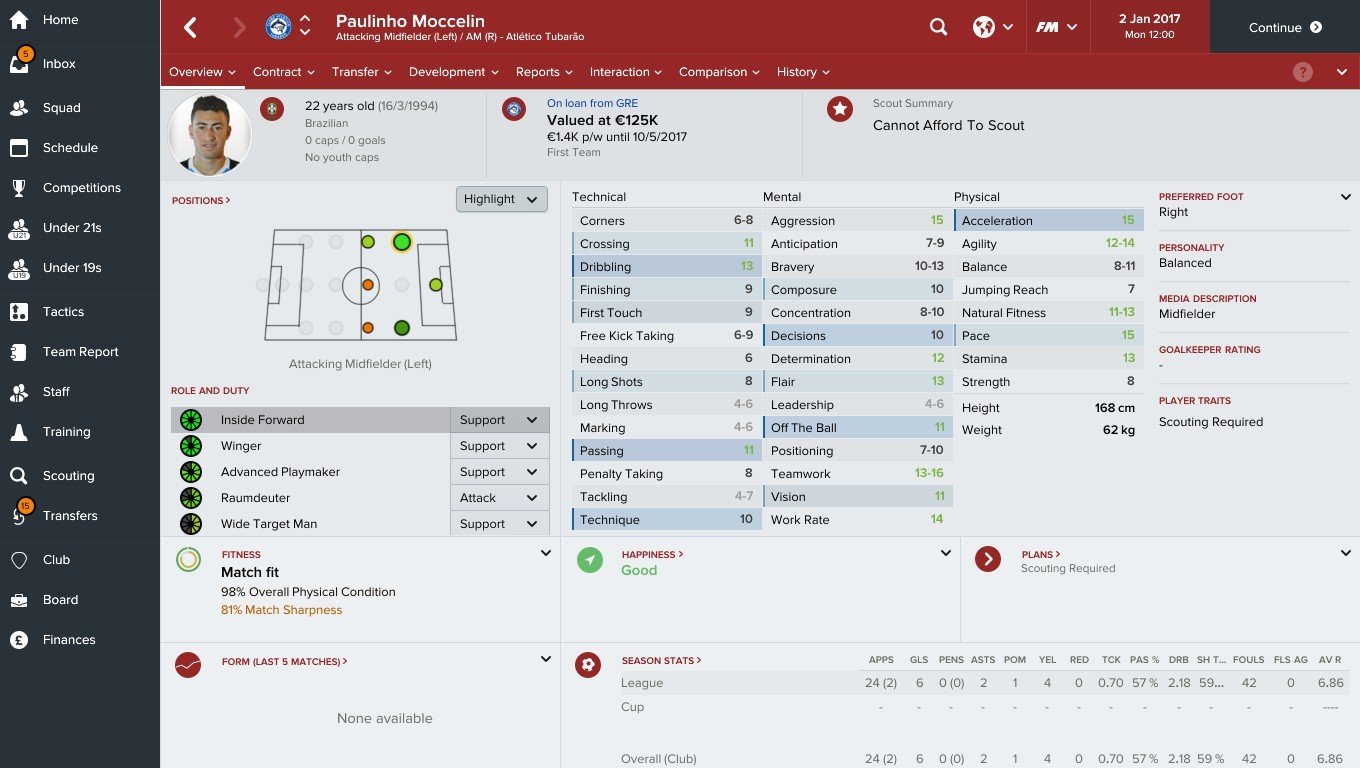 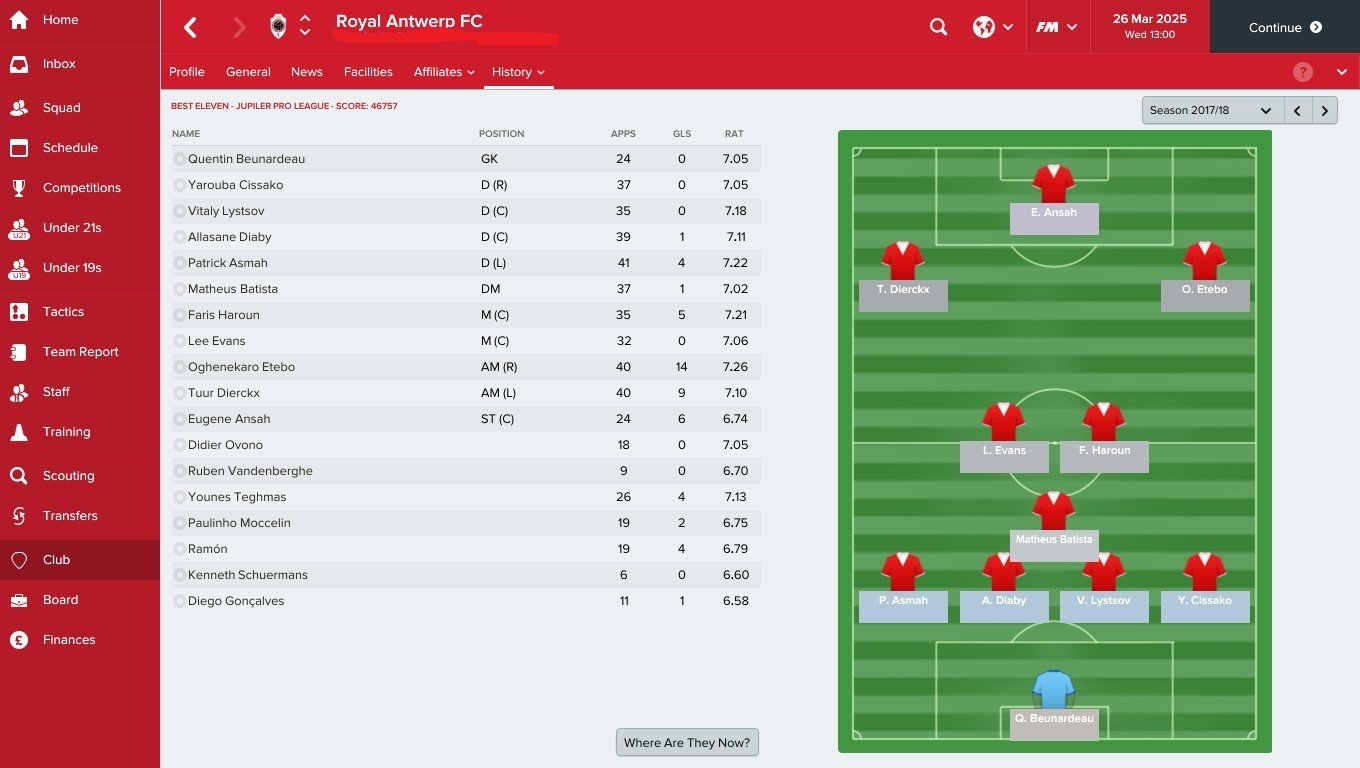 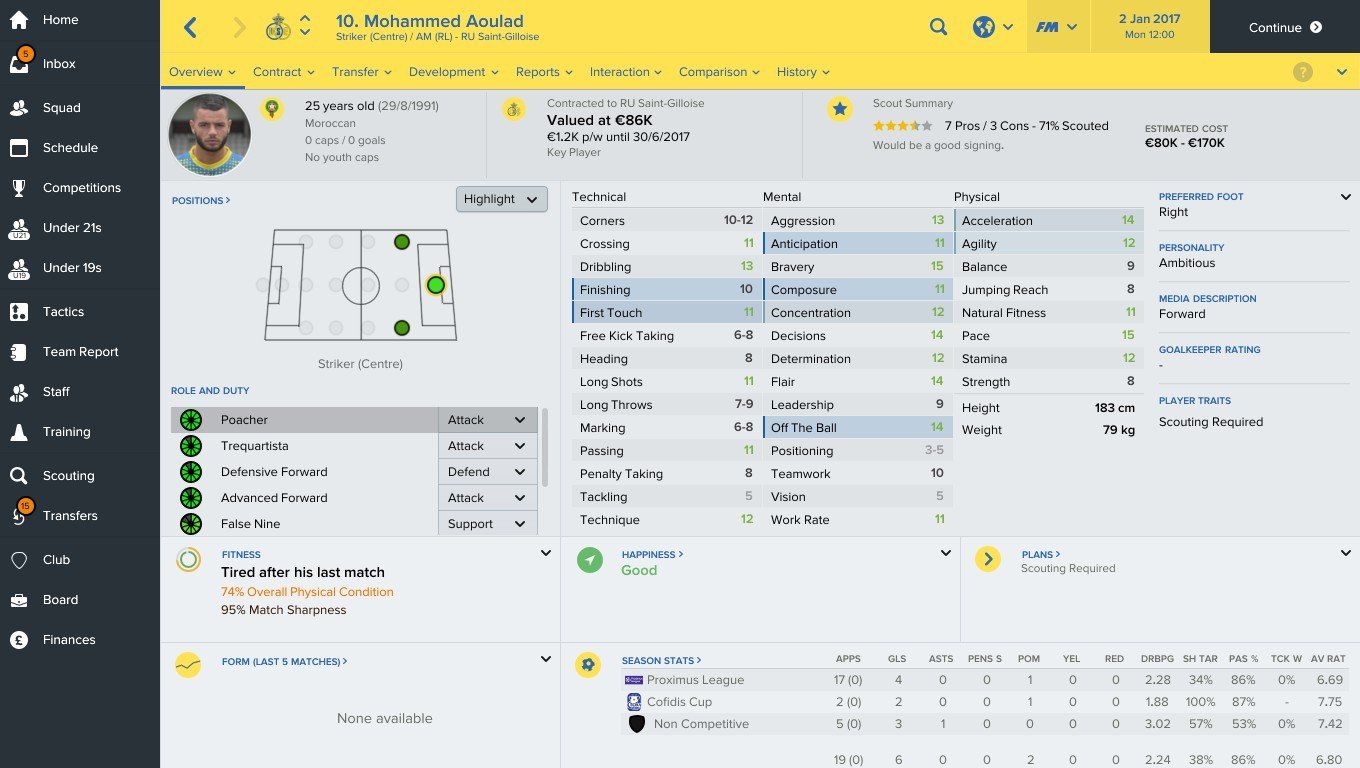 As Matheus Batista is really aging like a good wine, we will still play with the same tactic and thus a DM, although I don’t like that style of play.
But, it works, so… 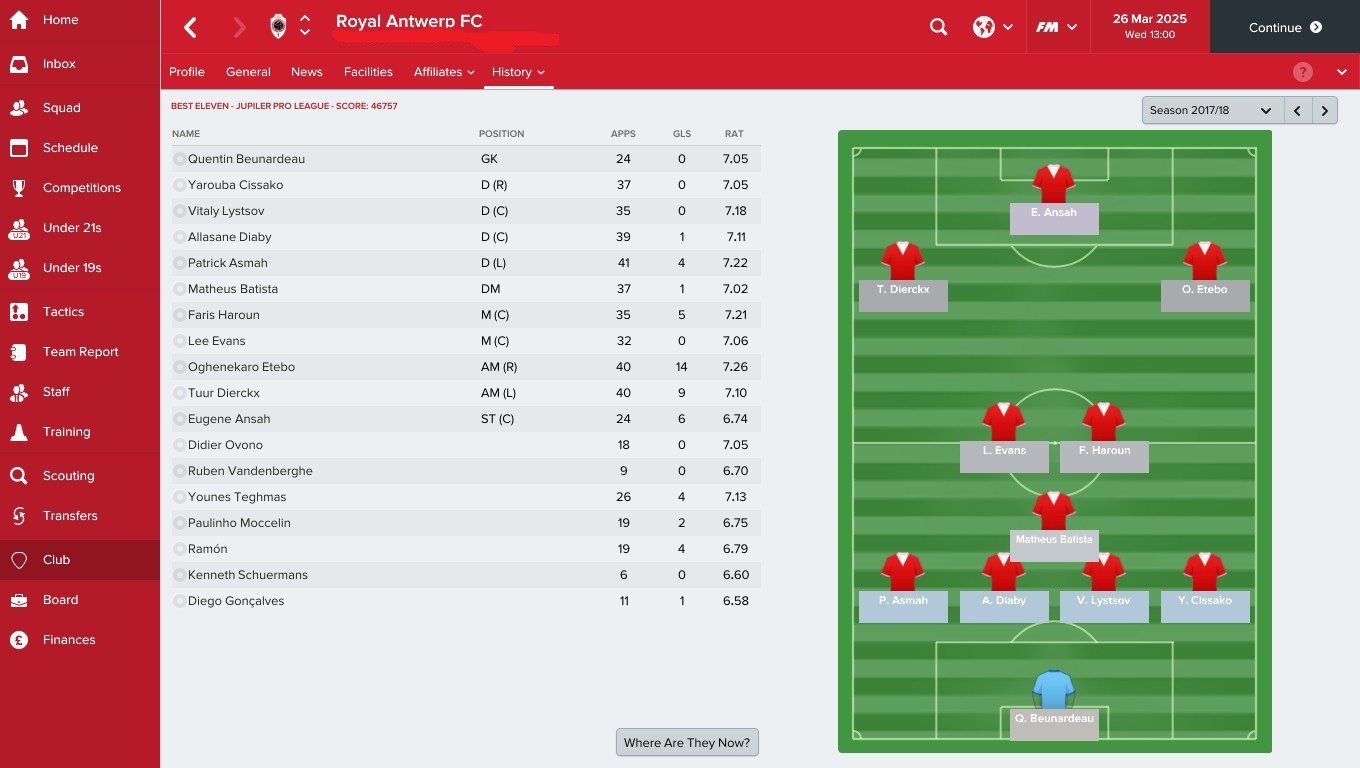 the moment the news said last year “ Antwerp returns to 1st division”, you felt the country holding their breath. Really? Those hooligans again? Can’t they stay where they are. No we can’t we will start marching on, to take over Belgium again, breaking the dominance of Anderlecht and Club Brugge. This first season, we will immediately show em who we are.

We had an amazing season, like, unbelievable we brought good football, we won a lot of matches and we immediately managed to end 4th!! I was ecstactic. In the championship we (obiously) dropped away a bit.

As we ended 5th we had to play a final against Lokeren to determine who would go into Europe. We won, in front of our own fans with 1-0. Antwerp is in Europe. 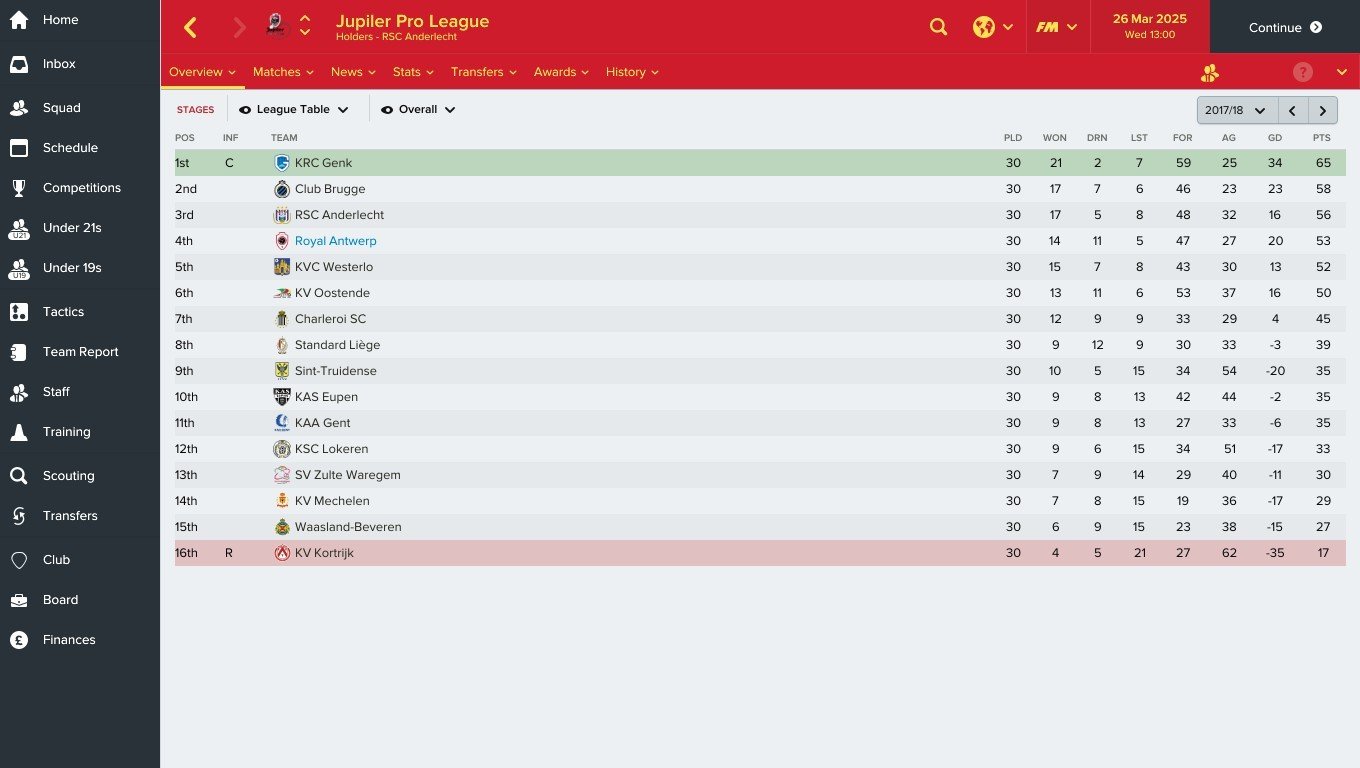 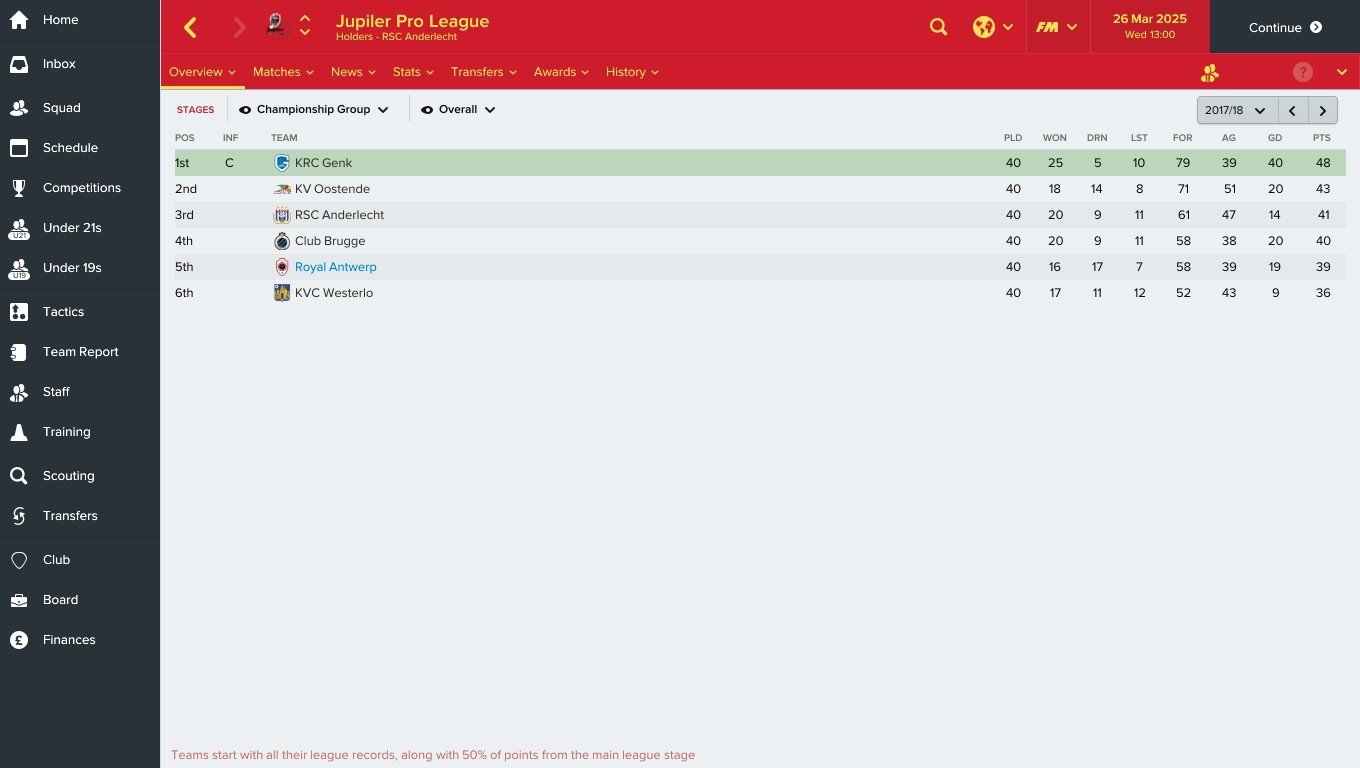 Well uhm.
we got in in the 6thj round and Lommel (2nd division) kicked us 4-2 in extra time haha. So yhea.
Login to Quote

Dylan
3 years
For the readers, is it okay to you if i skip certain seasons until i get you up to date? as some seasons aren't really worth talking about and i still have 7 seasons till you're up to date? let me know

You are reading "Royal Antwerp Football Club - The Great Old".