mgriffin2012
4 years
A good month and a good standing in the table atm! Still a long way to go though!
Login to Quote

Yeah looks like it could be tougher than I first expected. But we're looking pretty solid just a bit inconsistent. Hopefully this will improve in the coming weeks.
Login to Quote


Thanks. And don't I know it. Fingers crossed we'll kick on from the last match this time round. Will hopefully have another update soon providing my daughter goes down for a nap lol.
Login to Quote

http://i740.photobucket.com/albums/xx49/GlenGoddy/FM17%20-%20Vallecano%201st%20Season/octoberresults.png
Overview
Starting the month as we had finished September felt imperative and thankfully we made easy work of Almeria in the league, much in thanks to a 35 year old Roberto Trashorras, who was absolutely superb leaving us in great spirits as we headed into the International break.
Coming back from the break we had a cup game three days before we went back to league football, and in all honesty the cup was very low on my list of priorities and my lack of real quality in depth. So I opted for a weakened side, again at home to Almeria and I think they may have had a similar attitude as they just didn't turn up for the game and just rolled over for us. One of my B team players, Fran Beltrán made his debut for the club and picked up the man of the match award pulling the strings from the midfield. I decided to put a coach on him to watch his next couple of games at B level.
Three days later I named a fully fit and completely refreshed first XI at home to AD Alcorcón and that rest proved seemingly vital as we smashed them 4-1 and began to climb the table.
Cordoba, our first away game of the month and I named an unchanged starting line up from the team that destroyed Alcorcón. We went down a goal early in the game and really struggled to overcome their park the bus tactics. With five minutes to go I encouraged every player to shoot on sight as we chased the victory, Ebert being the hero as he tapped in a rebound from a Trashorras piledriver.
Another game in quick succession away to Valladolid and I had to make a few changes due to tiredness after the matches in quick succession. It's beginning to look like the age in the squad could become a factor as the season progresses. Trashorras scored a free kick in the first half and at half time I decided it was park the bus time as fatigue looked like it was already kicking in. Time wasting and clear the ball to the flanks with only Guerra as the outlet we managed to hang on for the win.
Finally we had a home match against a struggling Sevilla Atlético side. Again Trashorras proved that age is just a number, but as the game went on the youth of the Sevilla side shone through with their stamina beating us to every ball as they managed to get a deserved equaliser.

So close to getting a clean sweep of victories but I will take an unbeaten month this early in the season happily. I still don't have a preferred tactic that I am leaning towards as my scouts keep suggesting one or the other depending on opposition and having the choice between narrow with 2 up top and wide with 1 up top seems to keep the opposition on the back foot. Hopefully, age doesn't become too much of a factor and we see out the whole season in this kind of style.

I'd also like to give a special mention to Fran Beltrán who has been promoted from our B side to the first team. Adding to the youth with Alena and Guridi in the centre of the park.

mgriffin2012
4 years
Your players have taken to your managerial methods very quickly and that can only be a positive thing moving forward for your regime!
Login to Quote


Thanks mrgriffin2012. I certainly hope we have reached that understanding this quickly. will soon find out, new update coming tonight, daughter sleeping allowing lol.
Login to Quote

http://i740.photobucket.com/albums/xx49/GlenGoddy/FM17%20-%20Vallecano%201st%20Season/novemberresults.png
Overview
Well Bangoura certainly decided to show up at the right time at the start of November. I'll admit I was weary going into this match given their La Liga history, but we really came out the blocks firing and got a beautiful result after the 90 minutes.
Gimnástic after the International break seemed like it should have been the easier of my ties this month after their lacklustre start to the Season but they parked a tank, not a bus and we just couldn't find a way through.
Elche a few days later proved another tough task as we tried to keep pace with the leading pack. A simple defensive error was enough to break us and we just couldn't get into the game.
Another four days on, and a few changes to our depleted and tired line up saw us square off against Murcia. They hadn't been performing too well and it seemed like this was a chance to captialise. Especially after the Gimnástic and Elche results. With a chance of formation we scooped up the 2-0 win with ease.
A short time later we faced Valencia from the league above in the cup. I'll be completely honest and didn't fancy my chances at all. But I decided that despite it being a cup match, we were against a team in the division above us and we owed it to them to put out a strong side. And it sure paid off. 2-0 in the first leg! An unbelievable victory and well worth celebrating.

What a way to finish an already solid month. With already not too long to the winter break we have performed well in both the league and cup. Trashorras has proven he is a captain to lead by example, and despite being 35, he is definitely a huge asset to the club and definitely worth keeping in the long run.

mgriffin2012
4 years
Still a long way to go but it certainly looks like promotion could well be on the cards!
Login to Quote

Justice
4 years
In a position where you can now focus on battling it out for top spot! If you can hold some sort of good form together now, you should see a lot of other teams around you dropping points!
Login to Quote

GleNelG
4 years
Thanks for all the feedback and responses so far. Work has got the better of me but I will be back with this soon hopefully... also having to try and find a new image host as they want £399.99 at photobucket for me to show my images in forums.. slight rip off lol. Any sites you lovely lot can recommend?
Login to Quote

Justice
4 years
www.fmshots.com would be the best place. Its actually founded, and owned, by the creator of fmscout.com (Stam)
Login to Quote

Overview
We started the month well with a superb victory over Numancia to put us top of the league if only for a few hours. Absolute domination for the full 90 minutes, it was like watching an exhibition.
Unfortunately a week later we couldn't overcome a feisty Mirandés side who seemed more intent on disrupting play than playing football. But fair play to them, it worked in their favour as they ground out a point.
A week later we had Zaragoza and I had to make a decision three days before our second leg trip to Valencia. As the league is my priority, I opted to field a strong side and it proved correct as we picked up the comfortable victory.
We weren't however so fortunate in the cup where Valencia came out guns blazing against a tired first team and we ultimately went out of the competition. We still shown our grit however the opposition were just too strong.

Another solid month keeping us right up there with the frontrunner Getafe. This could be shaping up to be a great Title fight. One unfortunate thing is that over 50% of my starting eleven have teams in better divisions sniffing around them and six of which have made me promise to sell them if the right offer comes in... January could prove troublesome. 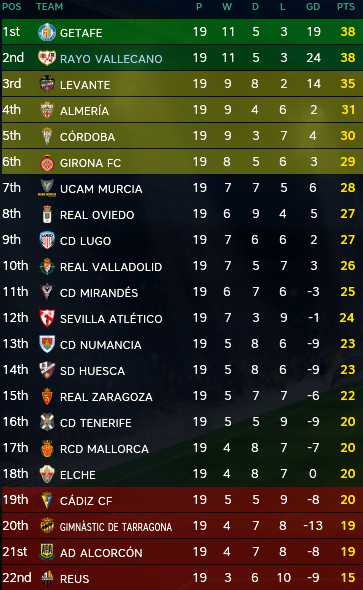 mgriffin2012
4 years
The defeat to Valencia will be tough to take but your league form is still exceptional and you're still looking more than on course for promotion to La Liga!
Login to Quote