I’ve not played FM for a few years, but on a whim decided to get back into it. I attempted a few challenges (British Steel etc) back in the day, and usually failed miserably which leads me to believe that I was never much good at the game

This time, rather than the pressure of a challenge, I’ve decided to go on a journeyman erm..journey, starting at the closest bottom tier club to where I currently live, and see where the game takes me. To add plenty of diversity, I’ve loaded a ton of leagues all over Europe.

I will try to play semi-realistically with the following self-imposed rules:

1. Any club move must be for a viable reason (higher wages etc)
2.The commute from where I am living at the time to the ground must be less than an hour by car or train. If not, I have to move house. (For example, if I am manager of Exeter, I cannot accept a job in Dunfermline unless I move there)
3. Moving clubs must be economically viable. I must be able to rent accommodation for 25% of my weekly wage. In other words I could not move to a club in Monaco on a wage of £150 per week.
4. The usual 'no coaching badges', 'Sunday league footballer' stuff applies

So, as I currently live in Bristol, my starting club is: 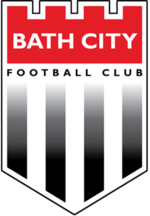 SeanTheGreatDyche
4 years
Looking forward to what this has to offer

A quick look at the squad suggests we have some rather mediocre players occupying a sizable chunk of our wage budget with little to no chance of offloading them. The board expects us to make the playoffs this season. 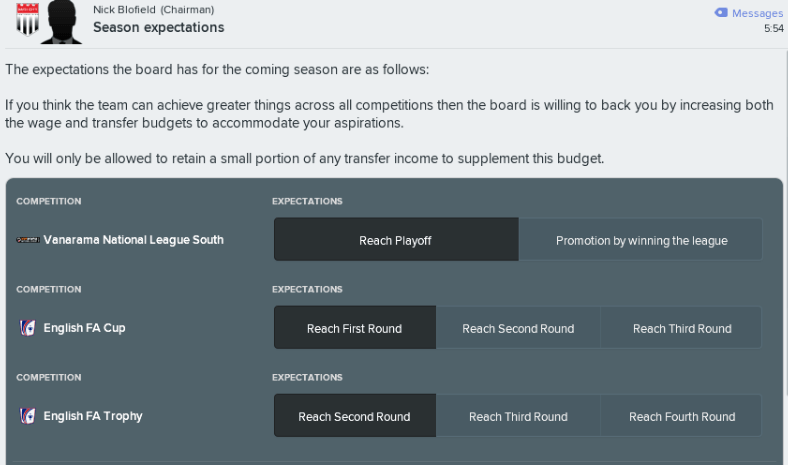 Either the standard in this league is bloody awful, or the board expectations are like "turn this local café into a Michelin standard restaurant, oh but don't hire any staff or buy any food to cook with"

Deciding that I need to strengthen the squad somehow I used up the transfer budget by sacking all of the youth players on £5/week; figuring that a £20 payoff is going to work out a lot cheaper than £5 per week over a season.

So I brought in a couple of defenders, a couple of strikers and an aging winger on free transfers (took us a few hundred over our wage budget), and 4 loan players to add to the 2 that we already have. 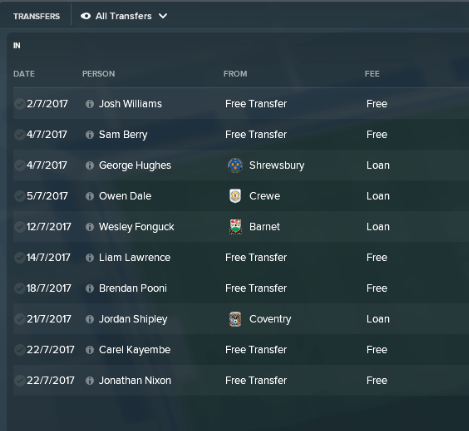 Whilst we actually have a few quid in the bank, I also started working towards my first coaching badge

We have 4 friendlies coming up, to try to decide on a starting lineup for the season proper.
Login to Quote

Well our pre-season matches didn't go too badly, with 2 wins, 1 draw and a loss to Birmingham Under 23's which is by no means a disgrace. 5 goals from our loan signing Owen Dale including a hat-trick, bodes well for the season ahead..hopefully. 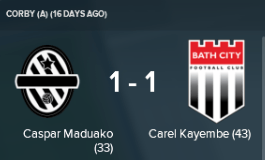 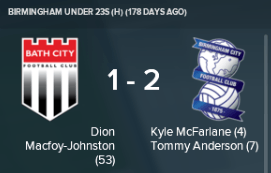 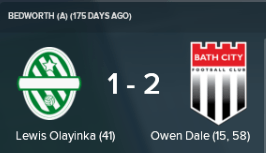 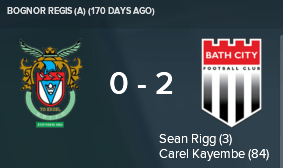 Although we didnt exactly dominate possession in our first game, between our early goal and late goal we had another 16 shots. 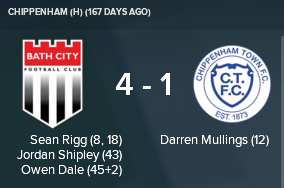 We had this game wrapped up by half-time, and if it wasn't for the opposing goalkeeper, we could have run up a silly score. 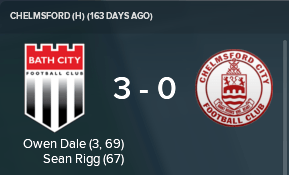 Another dominating performance with Sean Rigg and Owen Dale scoring again. Pity that Rigg is going to retire at the end of the season. 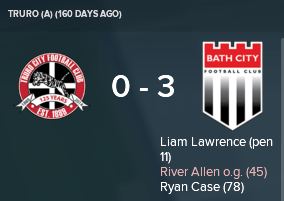 More of the same but with different goal scorers. Ryan Case our right back chipping in with a goal. 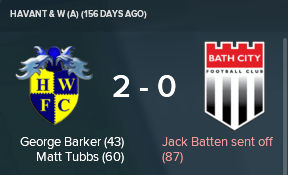 Our first loss of the season. A fairly evenly matched game, but we couldn't find the net. 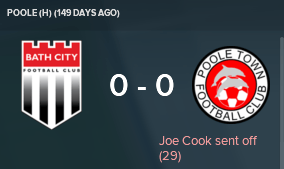 We followed up our loss with a dull 0-0. We may have done enough to edge it, but a point was fair. 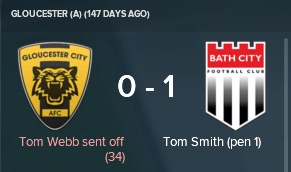 Back to winning ways, albeit with a 1st min penalty.


So, overall August gave us a good start to the season, which finds us top of the table. 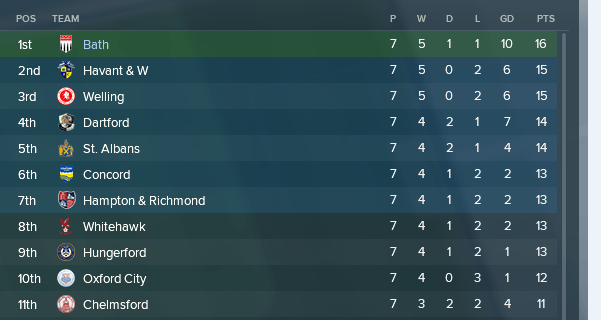 I also picked up Manager of the Month 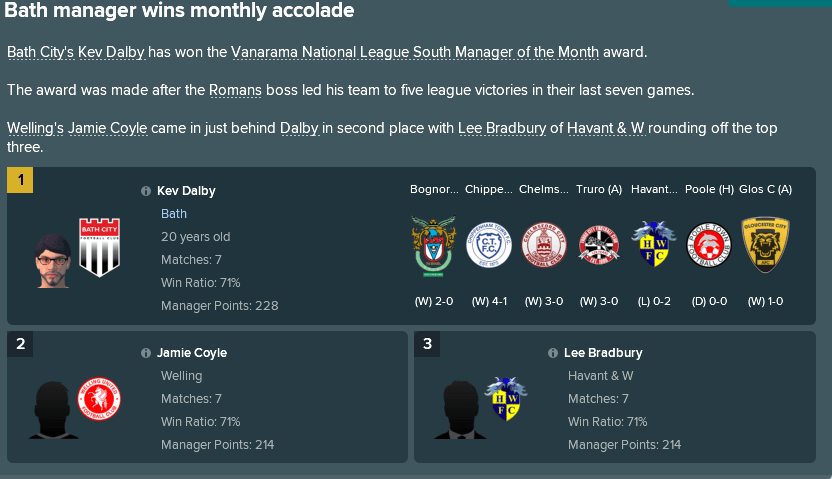 Our Player of the month was our loanee winger Shipley with an average rating of 7.5.

Rigg andf Dale chipped in with 4 and 3 Goals respectively, and had 3 Assists apiece.
Login to Quote

ScottT
4 years
Great start mate and a good start to the story too. Keep the updates up mate, I'll be reading along.
Login to Quote

Justice
4 years
Jeez, that's a strong start! You're Bath-ing in success at the minute!
1
Login to Quote


Another good month with 4 wins and a loss in the league, and coasted through the first 2 qualifying rounds of the FA Cup. 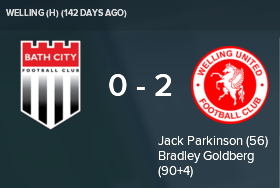 Not the best start to the month, losing a fairly evenly matched game against Welling. 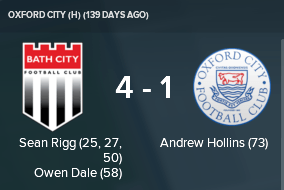 Back to winning ways, with a dominating performance. A Sean Rigg hat-trick wrapping things up in the first hour. 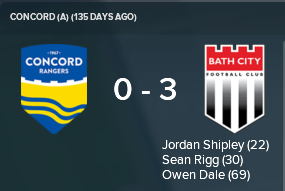 Another 3 points in the bag, with quality of finishing from the usual suspects proving the difference. 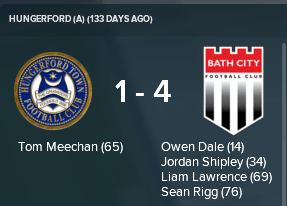 Almost a carbon copy of the previous game. (Wondering when the bubble will burst) 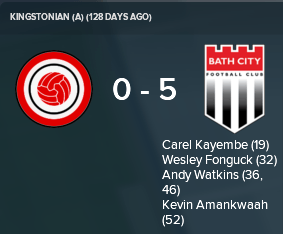 I rested some of our key players for the FA Cup game, not that it seemed to make a difference. 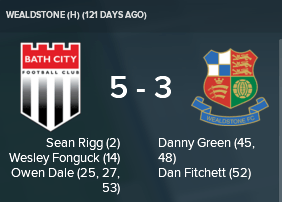 This one was a goalfest where we had a shot at goal every four minutes.

Bad news, one of our best players injured and out for 6 weeks or so. 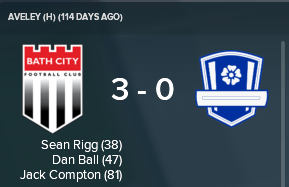 Another good performance. Compton (Shipley's replacement) chipping in with a goal. 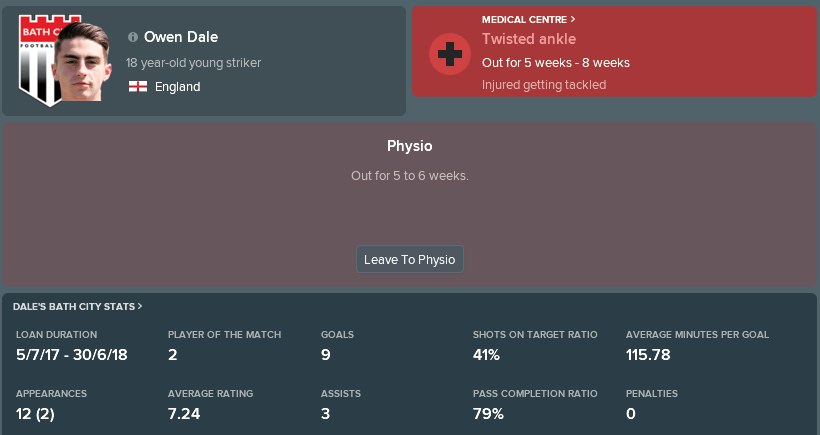 Another key player injured. Owen Dale, who has been scoring for fun so far, out for 5-8 weeks. I hope this trend stops as we don't exactly have much squad depth.

Our recent run of form set a new club record.


Another good month in both the league and cup, we are still sat on top of the pile. 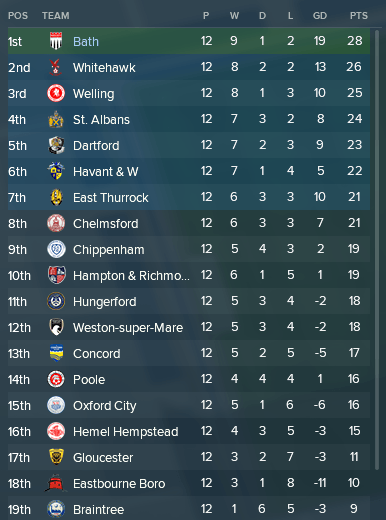 Our Player of the month was Jack Compton with an average rating of 8.0 and notching up 5 assists. He was only playing due to Shipleys injury which will give me a selection dilemma when he returns.

Rigg and Dale were our top scorers again this month with 7 and 6 Goals respectively.
Login to Quote

You are reading "Return to FM - A Journeyman Journey".