Indeed those updates are a bit lengthy for the average reader. Maybe consider spreading them out in more posts, and add some pictures to spice things up a notch.

I think that should make the story easier to read, bump it to the top more often (increased exposure), and possibly give you some flexibility to get into some more detail with the individual posts.

Quick note to start - I will be attempting to insert pictures into my story now. Want to get into the habit of using them instead of the obscene number of words in my previous updates. I don't want anyone to feel like they're writing a thesis as much as I don't want to feel like I'm writing one. Will be using my next few updates to finish off the season as a way to see how I can use fewer words whilst still giving a thorough update. This update will cover the games after the September international break to the games before the November international break.

As you can see (hopefully it works) the league form has started very well. 7 points from 3 games before the international break, and a further 16 from 7 in this update. We only dropped points away at Benfica and Maritimo, who were both occupying positions high up the table when we played them - games we probably expected to struggle in, so we cannot be too disappointed. Victory against Boavista was very impressive due to our efficiency - out of the 5 victories, we had our fewest shot total against Boavista and it ended up as our biggest win. Magalhaes and Ackermann impressing early on in their debut seasons, and Joshua Zirkzee continuing his impressive form.

Overall, good performances all around, as we finished this period with the best goal difference in the league, despite Porto and Benfica already taking the lead in the table by a few points due to having played more games. Unfortunately as I had already continued to play this season past the November international break, I won't be able to add a table, though using the past positions table, I can see that I finished this period in 4th, behind the main 2 teams and Maritimo. Won't be making the same mistake in updates to come.

Cup update is a slightly weirder one due to the nature of the League Cup being a group stage event rather than a knockout stage. Due to our focus being on the Primeira Liga and Champions League, our cup games featured mostly rotated sides, with varying degrees of success, evident from a comfortable win at Viseu and then a very undeserved defeat at home to Aves - 22 shots to their 7 for a very disappointing result. But we still lead the table after 2 games due our strong goal difference, with all 4 teams having both won and lost a game each. As only 1 team makes it through the group, we must win our final game at home to Moreirense on Boxing Day to make the final 4.

With our comfortable win vs Mondinense in the Taca de Portugal, thanks to a masterclass from Leo Chu and veteran Fabio Coentrao, we will face Arouca in our first game back from after the November internationals - a team we were beaten by in the 3rd round in our first season. Hopefully we won't have a similar result.

Unfortunately our Champions League form was unable to go as well as our league and cup form, but we put in a strong showing across our first 3 games. Having hit the woodwork twice early against Arsenal, and taking a first half lead away in Leverkusen, it was very disappointing to finish with 0 points from the 2 games, and also having 46 shots across both games. It was very good to see us regularly create chances but we were punished for not putting them away enough. 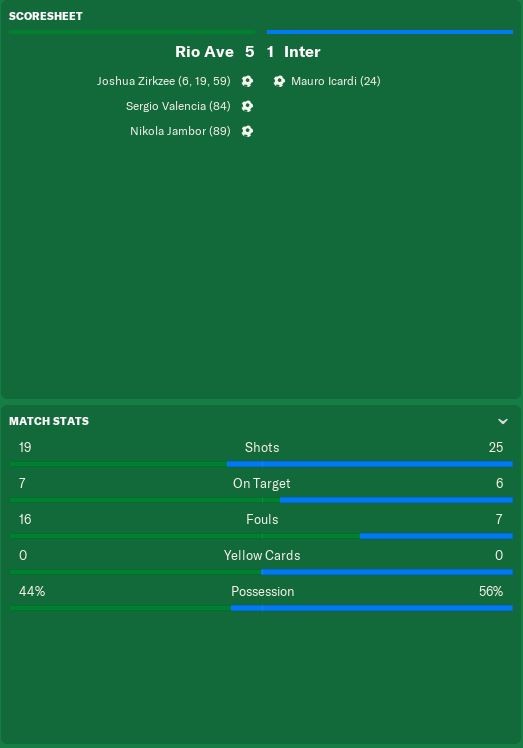 And then that happened. Much like against Boavista in the league, we found our shooting boots without necessarily having loads of chances, and it paid off in a major way. Zirkzee with his 2nd hat trick in the Champions League campaign, but against massively improved opponents - possibly the greatest performance of my campaign here. Unfortunately this was followed by a defeat in the return game a fortnight later, leaving our chances of making it through the group close to impossible. But a 3rd place finish would give us a Europa League campaign, and this will be our target for the remaining 2 games in the group - at least we wouldn't get knocked out by Inter Milan this season.

Overall, a good set of results, but struggling against the trickier opponents, with the freak Inter result the exception. Zirkzee continuing his good form, with the youngsters proving they can go up against more experienced opponents. Also worth mentioning is Gabrielzinho, who spent much of last season and this pre-season injured, but coming back with 4 goals in 5 league games.

Next update will take us to the end of 2020, with us finishing the group stages of both the Champions League and League Cup, and playing the Taca de Portugal 4th round in November, and hopefully the 5th round in December should we make it through. Thanks for reading.
Login to Quote

DesmondTheCat
1 year
Evening all. Should be my shortest update so far as there are only 10 matches across all competitions to get through, to round off 2020.

Unfortunately a fairly poor set of results here. Defeated at home to Vit. Guimaraes, whilst we were both challenging for 3rd spot, was disappointing, leading Arouca 3-1 on 85 mins and coming away with a draw is very disappointing, and those 2 results being followed by Portimonense scoring a 91st minute equaliser the following week is a bit of a shambles. Losing at Porto can't be something to get too annoyed by as they are still unbeaten, but we finished on a high as a dominant performance gave us a win at home to Vit. Setubal, even if it was by a narrow margin. Hopefully the new year will bring results similar to that one rather than the few that proceeded it.

Not a terrible position to be in, but our pre-season target of catching up with Benfica and Porto looks unlikely to be met. Luckily our poor form coincided with Maritimo, Braga and Vit. Guimaraes not being able to capitalise, but it seems that Sporting may well have figured out how to play football after 2 fairly unimpressive seasons, but I am confident that we will rise to the challenge.

A good run here in the Taca de Portugal, with Diego Lopes having a great month managing to add a wonderful goal in the 4th round and then a superb hat trick in the 5th round against Vit. Setubal, who we have enjoyed a good December against. Unfortunately our reward for the 5th round win was a 6th round tie away at Benfica, who are in near perfect form themselves - topping a Champions League group containing Barcelona. So we have hope, but not expecting to progress to the final 4.

Less impressive was the League Cup. With all 4 teams sat on 3 points, and us in 1st due to the best goal difference, we needed a win to top the group as the only team to get into the final 4. But poor performances in midfield and in defence could only force a draw at home to 2nd division Moreirense, as we fail to qualify for the final 4 of the league cup for the first time.

We went into the Arsenal game needing a miracle to be able to finish 2nd, and it unsurprisingly did not arrive. All that was left was a playoff against Leverkusen for 3rd spot and a chance to play in the Europa League in the new year, and we delivered. Dominant away in Leverkusen but losing was sad, but we got our revenge by being more dominant, taking 35 shots for a 4-1 win.

With the Europa League spot confirmed, we went into the draw hopeful of a good draw, but we were not in luck, facing Chelsea again for the 2nd time in 3 seasons at the last 32 stage. We are much improved from that season so we must remain confident, and with Zirkzee in good goal scoring form, we had still have a chance.

Speaking of Joshua Zirkzee - with the last day of December came award season, as he was named the European Golden Boy and the U21 Footballer of the Year for 2020. 27 goals and 7 assists is an outstanding achievement for a striker who only turned 19 in the summer. Hopefully he can continue this for the rest of the season and perhaps even improve on it in 2021.

Overall, a mixed bag. League performances have kept us from attacking the top 2, whilst good cup performances were rewarded with very difficult draws (and we'll ignore the League Cup). Just the 2 updates left to finish off this season, and hopefully our performances in the next update will leave us with something to play for in the last one. Thanks for reading.
Login to Quote

You are reading "Rio Ave - Road to Primeira Liga Champions".