The crowd roared. Juninho Pernambucano bends a free kick right into the top right corner of the net. Me, and several other players, sprint to celebrate with the Brazilian free kick master. It was my debut in the starting line-up that evening. I started because Mahamadou Diarra caught a case of food poisoning the night before. I was called to meet Paul Le Guen before the game. "Fethi," he said. "I know you're young, and you probably expected to sit this game out as well. Well – Mahamadou's sick, and you get to start instead of him. Good luck, kid." I was shocked. I rose through the academy ranks of Lyon rather quickly. I was a central midfielder, and my playing style was similar to Iniesta's. I dictated the tempo and held down the middle of the pitch. I was the first one out of many footballers that came out of Lyon's academy, with Karim Benzema and Hatem Ben Arfa breaking in the first team squad some years later. I scored the second in that game against Auxerre. I remember it. A daring flat shot right from outside the box. To the near corner. Fabien Cool wasn't ready for it. In a split second, the crowd was screaming again. I couldn't hear a thing. To this day, it still somewhat of a blur to me.

Two months later, I was placed on the transfer list. Le Guen didn't think I'm good enough for the Lyon squad and showed me the door. I wasn't waiting for too long, and I signed for Seria A side Brescia, who signed me for £1,200,000. My career in Lyon ended with 21 appearances and 5 goals to my name in just 18 months. The move to Brescia wasn't a bad move for me – I got to rub shoulders with Pep Guardiola right before he left to Al-Ahli. He taught me a lot about the game and I owe him for that. We both were an efficient combination. Two years went by, and by August 2006 I was a topic of interest for many clubs around Europe. I went on and signed for Real Betis that summer, for a whooping £4,000,000. Life in Spain was good. I clicked on with the rest of the team rather quickly and while we finished in the 16th place, we improved over the next two years and managed to stick to the 13th place. A year later, we were hit with relegation, and it was unexpected. I was out for the majority of the season following a broken foot injury that occurred in the first game of the season, and while I tried to help as much as I could, the shame of relegation lays on me as much as it lays on other, more involved players.

This was the time to move on, and Betis was looking to cash in on me. Olimpique De Marseille was willing to give me a chance, and I accepted their offer, moving in for £12,000,000. Partnering with Lucho Gonzalez and Mathieu Valbuena was a wonderful experience. We were a dominating trio, and we turned the midfield into a nightmare. My return to France was not really accepted by the Lyon supporters. I was mostly booed whenever we met, but still, I ended my first season at Marseille with a double. The Ligue 1 title and the Copa De La Ligue were in my pocket, and I was ecstatic. I stayed at Marseille for another four seasons, before retiring in 2014. 429 appearances, 41 goals, and 93 assists over the course of fourteen years. I wasn't a world class midfielder, but my name was known.
Now, it is time to take on the coaching course and find myself a team...
Login to Quote

Eoin97
1 year
Very good writing mate! Great to have another good writer on board! Good luck!
Login to Quote

ScottT
1 year
An interesting playing career! Looking forward to seeing who is willing to give Fethi his first shot in management.
Login to Quote

Justice
1 year
Good luck, I will be following with interest!
Login to Quote

BREAKING: RAPID WIEN SIGNS CHATELAIN ON A ONE YEAR DEAL.

Austrian outfit Rapid Wien, record winners of the Austrian Bundesliga, have signed former French international, Fethi Chatelain on a one-year deal to manage at the Allianz Stadion. The 34-year-old Chatelain replaces Dietmar Kuhbauer, who failed to bring success to Rapid in his one-year tenure. Chatelain is seen as a 'desperate move' by many, although he comes with proven experience and a lot of theoretical knowledge. Chatelain, a former OM midfielder, reportedly spent the four years since his retirement readying himself for a manager's position. He reportedly spent a year at Bayern, learning from his close friend Pep Guardiola, who played alongside the French at Brescia. He also took several courses at Burnley, where Sean Dyche makes wonders with an overachieving squad. He took several other courses around the world, learning from Thomas Tuchel, Marcelo Bielsa and Jorge Sampaoli as well. 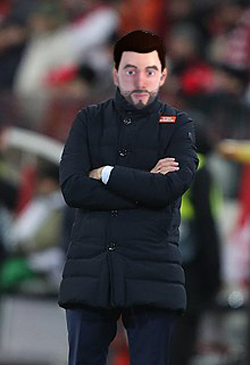 Chatelain at the Allianz Arena. Learned from Guardiola.

Overall, the French had a mediocre playing career, with only two titles to his name, but it is widely agreed that he was an intelligent individual with great vision and understanding of the game. It was just rotten luck that prevented him an entry ticket to the top clubs of Europe. He has no proven track record as a manager, but Rapid Wien is desperate for new blood, someone that would change the system of the club, and lead it towards a better future - Having not won a title since 2007. Chatelain won't have many resources to shape the squad to his liking, contrary to other teams such as Red Bull Salzburg that basically have endless resources. This will definitely be a challenge for the former OM midfielder.

We'll be here to follow.
Comments:
Scott: Well, I guess now you know

Justice
1 year
Everybody loves a Wiener, ain't that right Scoot?
1
Login to Quote

Eoin97
1 year
Fantastic start mate. Graphics are impeccable. Looking forward to seeing where you take this!
Login to Quote

Looking forward to seeing how Fethi fairs with Rapid, a club who have a rich history but are in the midst of a bit of a drought recently trophy-wise. Tackling the dominance of Salzburg will be the first problem to solve!
Login to Quote

Nerazzurri
1 year
Nice start to the story. And goodluck with Rapid, i'm sure Fethi will be a success.
Login to Quote

Fethi Chatelain just finished his sixth league game, and the transfer window is now closed. It's time to look at the French's way so far. How was his journey?

OVERALL SPEND: £5,250,000 | NO DEPARTURES.
Seems like Chatelain put in a lot of thought in his transfers this summer. Here are some of his major transfer market moves.

Robert Zulj - £1,500,000 - Hoffenheim
Superb transfer for Rapid. The out-of-favor Austrian returns to his homeland after a four-year Bundesliga tour. Considering there are not many goalscoring options at the club, Zulj is expected to blend in the routine and provide from his experience when needed.

He's back to Austria. Robert Zulj.

Patrick Erras - £1,400,000 - FC Nürnberg
Same as Zulj, Erras arrived to Rapid after a stint in Germany, although far less successful than Zulj. The central midfielder is "critical" to Chatelain's plans, and is expected to provide the most out of the playmaker role in Fethi's 4-4-2 low back.

Francisco Trincão - £1,000,000 - Braga
The Portuguese youngster arrived to provide depth and creativity to a lacking left flank. Chatelain sees him as the future of Rapid and was willing to splash a big amount on the Braga U21s player.

Luiz Phellype - LOAN - Sporting CP
The Brazilian striker arrived as the top target for Chatelain, and is supposed to provide Rapid a decent goalscoring option.

All in all, pretty mediocre for Chatelain and Rapid. While unbeaten, they still have to step up and provide better football and more goals if they wish to challenge for the title. The low block 4-4-2 is still being tweaked by the French but it is providing solid results so far. All in all, with Rapid sitting 2nd in the table, there's not much to worry about but improving further.

That's all for now! We'll keep following closely, Rapid has something for us, that's for sure.
Login to Quote

ScottT
1 year
It's about turning draws into wins, now. A strong start nonetheless and some real bargains brought in, especially Trincao for such a minimal fee!
Login to Quote

TheLFCFan
1 year
An ok start, in my opinion. Unbeaten and second in the table, but not enough goals are being scored. Already nine behind Austria Vienna, hopefully as the season progresses the scoring will improve.
Login to Quote

Justice
1 year
Trincao is a marvelous signing, especially for such a low fee. The results haven't been too bad, unbeaten in that run of games. Your defensive record has been strong, the goals will come with time.
Login to Quote

You are reading "Fethi Chatelain - A bit shy off the top.".