After an intense game at Rapid's stadium, the Weststadion, it's Fethi Chatelain and Rapid Vienna that hold the bragging rights regarding who's the better football team in Vienna, after beating Austria Vienna 1-0. Supporters from both sides pulled off great shows before and during the match, contributing to the great atmosphere around the game.

Both teams showed various versions of the 4-4-2 formation, with Chatelain sticking to his low-block 4-4-2 against a 4-2-2-2 DM formation. With Rapid being unbeaten at this point, they were the obvious favorites, and they had a reason behind it - Their team is the best defensive team in the league, by a mile. They conceded only six goals in nine league games while scoring nine. They kept a clean sheet in three various occasions, five if cup games are included. Austria Vienna enjoyed a strong start as well but conceded two losses in the same number of games.

Rapid started the game with great pressure over Patrick Pentz' goal and the well-deserved goal came in just nine minutes after the match began. Stefan Schwab passed the ball to Robert Zulj, allowing the ex-Hoffenheim striker to curl a flat ball into the far corner of the goal. The crowd roared and Rapid were on the lead - It's 1-0 against their bitter rivals. From that moment onwards, Austria Vienna tried attacking back but failed to find the net during the following eighty minutes. This should be credited to Rapid's organized defensive play, disallowing their rivals from any easy chance at goal. 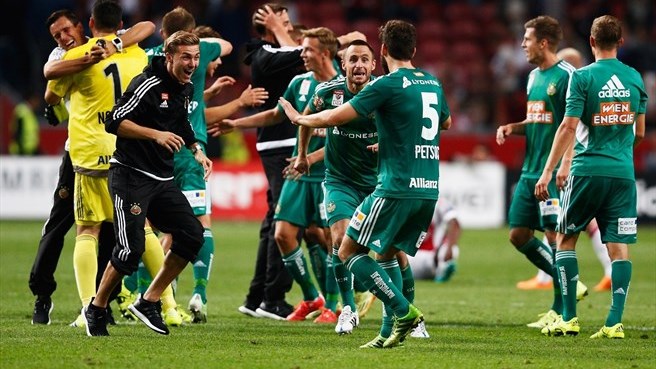 Rapid Vienna's manager, Fethi Chatelain, was happy with the result, saying:
"Austria Vienna are a very talented side but we managed to exploit their weaknesses and get an early lead which we held onto throughout the match. I think we showed dedication and great motivation during the game, and I would like to thank the fans for pushing us through the whole ninety minutes."


Replies:
Scott: Yeah, I definitely agree about the bargains, and I can safely say, the team is looking much, much better now.

Justice: I agree, it's just that most of the draws came from a 90+3 minute goal or something around these lines and it pissed me off. Luckily, I can say we're way more stable now so all good.
Login to Quote

Jack
1 year
An absolutely fantastic result that will get Fethi on the side of the fans even further. Also a huge result in terms of league position!
Login to Quote

ScottT
1 year
Great result against your bitter rivals! Rapid will now hold the bragging rights of the city until the next fixture.
1
Login to Quote

Solid game all in all. We scored first, they scored twice, before we equalized. Could've been a win, but we were unlucky in front of goal.
Goalscorers: Phellype (19), Erras (53)

All was told in the previous update. A single goal by Zulj gave us bragging rights! Great feeling.
Goalscorers: Zulj (9)

What seemed to be a draw ended with an amazing 2-0 victory. Christoph Knasmüllner scored a braced at money-time.
Goalscorers: Knasmüllner (89, 90+1)

Red Bull's money? Forget about it! We proved everyone wrong and won with an inspiring defensive display.
Goalscorers: Zulj (17, 45+2), Phellype (83)

First draw after several wins. Not too bad. We keep getting better and better. That was just unlucky.
Goalscorers: N/A

Back to winning. Schwab with an early goal that made sure we come out as winners in a harsh away game.
Goalscorers: Schwab (6)

Overall, it's been a great phase to be a Rapid fan. The team is only getting stronger, and Chatelain have lead the team to the cup QF as well. I think the low-block 4-4-2 proves itself rather efficiently, and I might adopt this tactic in the future as well. Great results, especially in the Wiener derby and the RB Salzburg game. All I can say is we're doing great and we should keep doing great.

Looking good! Starting to get comfy at the top. Impressive defensive record, too. I'm happy.

Scott: No doubt! That was a wonderful moment for Fethi.
Jack: Yeah, no doubt. The derby win was a major achievement that helped the team get better, both chemistry wise and morale wise. Couldn't ask for better timing.
Login to Quote

Justice
1 year
Incredible set of results. Time to make it incredibly comfortable at the top!
Login to Quote

ScottT
1 year
The form has been excellent and Rapid are well on their way to ending the Salzburg dominance if they can maintain it!
Login to Quote

TheLFCFan
1 year
Continuous improvement is always great to see! Hopefully that lead at the top will only be made bigger.
Login to Quote

RAPID HEADS ON TO WINTER BREAK AS TABLE LEADERS

A brace from Phellype giving us the edge over a highly motivated Wolfsberger side.
The low-block 4-4-2 keeps getting results and I'm very happy about it.
Scorers: Phellype (48, 75)

Another minimal victory, but a win is a win. We kept a clean sheet for the ninth time so far. Hopefully, we can keep that form going. Leonardo Castro gives us the edge with his second goal this season.
Scorers: Castro (42)

Another away game, another victory, another clean sheet. Stefan Schwab scores an easy penalty and we manage to keep the score that way until the final whistle.
Scorers: Schwab (12, pen)

Absolutely destroying Altach in our first home game in a while. Phellype, Murg, and Schwab score four before the second half even started. Amazing victory and another clean sheet! Our 11th this season. Definitely fun to see.
Scorers: Phellype (9), Murg (13, 29), Schwab (39)


It's time for Rapid head on to the winter break as table leaders, and still unbeaten. Fethi Chatelain and Rapid Vienna look like a match made in heaven. The French himself signed a contract extension until 2021, waving off interest from Southampton and Watford, both struggling in the Premier League at the moment. Chatelain was also linked with the Eibar manager job but politely declined to answer, stating that "He's too busy preparing for the second half of the season to answer questions based on rumors." 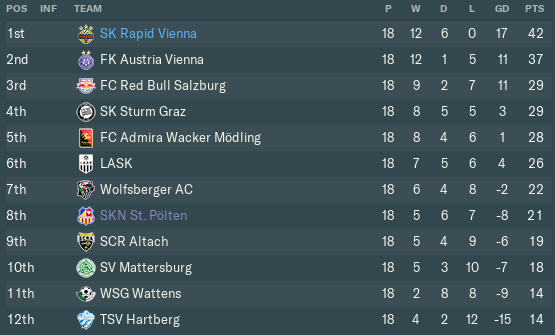 Replies:
Scott: With how Salzburg looked so far, I think they'll struggle to catch up, but we'll see about that!

Justice: We are getting comfy at the top, definitely! Great start.

TheLFCFan: It was made bigger! Now we have to keep it that way.
Login to Quote

ScottT
1 year
A flawless month and that can't be sniffed at. Excellent work from Fethi and hopefully there is more to come. The five point gap can easily be clawed back, so it's important that results continue to come.
Login to Quote

Justice
1 year
Some more great results, still unbeaten in the league! The big win over Altach to end the month will be a massive confidence booster, the league is in your hands now!
Login to Quote

TheLFCFan
1 year
The defense has been incredible so far this year. It is clearly the most important part for the team, 11 clean sheets and 12 wins

Great to stay unbeaten, long may it continue
Login to Quote

You are reading "Fethi Chatelain - A bit shy off the top.".