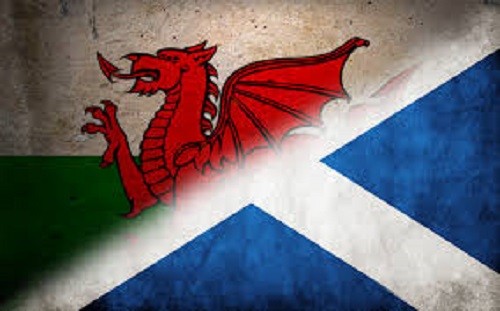 I had an update written up for this game like the last couple of updates but as I went to post it I got a 'request parameters' message. Been getting that a lot but when I have I usually go back one and my text is still there but this time I got a double request parameters message or whatever it says and it wasn't anymore. Worst of it is I had copied the text at some point but then overwrote that with a link I was adding

Time for bed so I have just updated this match in pictures.
Login to Quote

Scotland is an interesting nation and league, something I have always wanted to play in so I am following along to see how it all goes for you.
Login to Quote

TheLFCFan
1 year
What incredible results! Winning every game in that group must give you real confidence going into the knockout rounds!

(Think you may have accidentally updated the Croatia game twice!)
Login to Quote Scotland go into this match as the favourites having won all three of their group games whereas Greece won, drew and lost one in theirs. Scotland will miss Ryan Christie and Ryan Fredericks who miss out through suspension. Greece have two out through suspension too as Kostas Stafylidis and Michalis Bakakis also miss out. On the back of their 2-0 defeat to Germany Greece will be hoping to bounce back and reach the quarter finals. After impressing in the last match against Wales Tom Cairney has been handed a start over Matt Ritchie, Craig MacGillivray regains his place ahead of Robby McRorie and Callum McGregor is preferred on the left wing ahead of Ryan Fraser.

9: Panagiotis Retsos goes in hard on Callum McGregor and will receive a booking here. He will miss the next game if Greece make it through this game.

10: Andreas Bouchalakis plays a nice ball out wide to Tasos Donis who's running down the wing here, he cuts in, dummies it and shoots.... Ohh it hits the post and McKenna clears the ball from the danger.

15: Donis has the ball on the counter here and he's going straight for goal and he hits it.... SAVED by Craig MacGillivray!

18: Scott McTominay has the ball here, plays it long to Callum McGregor who shoots... Straight at the goalkeeper, that was easy.

37: Taxiarchis Fountas is attempting to go by Andrew Robertson here and he does, he whips in the cross for Efthymis Koulouris who hits it on the half volley.. It's over the bar!

Half Time: The referee blows the whistle for half time in this disappointing game.

50: Robertson has the ball on the left here and he's on a run, plays a 1-2 with McGregor and crosses it to Cairney who lays it off for James Forrest who shoots... It's just past the post!

56: Andreas Bouchalakis will pick up a booking here after a poor tackle on John Mcinn and he will miss the next match should his team qualify.

57: Greece will make all three of their subs here as Fountas, Koulouris and Bouchalakis will make way for Panagiotis Tachtsidis, Kostas Fortounis and Vangelis Pavlidis.

60: Donis is taking everyone on here as he dribbles by three players and he's bearing down on goal now, shoots.... Just past the post!

62: It's Robertson with the ball on the left here, he cuts it back to McGregor who shoots... Ohh that wasn't a great shot and his effort has sailed over the bar.

65: Scotland are looking to make a couple of changes here and it'll be Robertson and Cairney who will make way for Kieran Tierney and Matt Ritchie.

70: Alex Mowatt will make his first appearance of the tournament as he comes on for the disappointing McGinn.

83: Tierney is bombing down the left here and he's switched it to Fredericks who's setting up for the shot... It hits the side netting. Neither team look like scoring here.

Full time: That is the end of 90 minutes here and we now have to endure another thirty minutes of this.

91: Ryan Fraser will come on for the tiring James Forrest as Scotland make their final change as they push for a winner here. Kostas Mitroglu comes on for Donis for Greece too and the striker could make a real impact.

92: Kostas Tsimikas will pick up a booking here after a foul on Fraser.

93: McGregor will join the list of players booked today after a foul on Fortounis.

98: Scotland manager Christopher Burns is having a real go at his players on the touchline as he demands more from them in this match.

103: Devastation for John Souttar here as he picks up a silly booking that will see him miss the quarter final should his team go through.

105: Greece are having a real go at Scotland here as they have shot after shot blocked and intercepted by the Scotland defence.

Half time in extra time: There still doesn't appear to be much between these sides however, Greece seem to be on the front foot after the first half of extra time.

111: Fortounis is looking to take advantage of a misplaced pass here as he bears down on goal, sets up the shot AND IT'S SAVED BY MACGILLIVRAY! THAT WAS CLOSE!! Corner.

112: Tsimikas with the corner here, straight at Souttar who heads it clear.

114: Pavlidis looks to cross the ball here and Fortounis awaits... HE'S SCORE, FORTOUNIS HAS GIVEN GREECE THE LEAD!!!!

115: Scotland have thrown everyone forward and are playing with just two centre backs with McTominay sitting in front of them. Tierney joins the midfield, Paterson goes up top and McGregor goes inside to join the attacking midfielders.

117: Tsimikas has the ball on the right here and he crosses the ball to Pavlidis... AND IT IS OVER FOR SCOTLAND AS GREECE HAVE SCORED A SECOND!!!

120: Tsimikas is looking to score another here as he bears down on goal but he's passed it to Fortounis WHO MAKES IT THREE!!! Scotland have been ripped apart after pushing everyone forward.

Full time: That was an entertaining final fifteen minutes there as Greece finally took control of the game. That should not have been a three nil loss to Scotland who will be devastated to go down and out in such a manner. With how close this game was it seemed inevitable that penalties would be needed to separate the sides. That wasn't to be the case though and Greece will go through and Scotland are OUT! 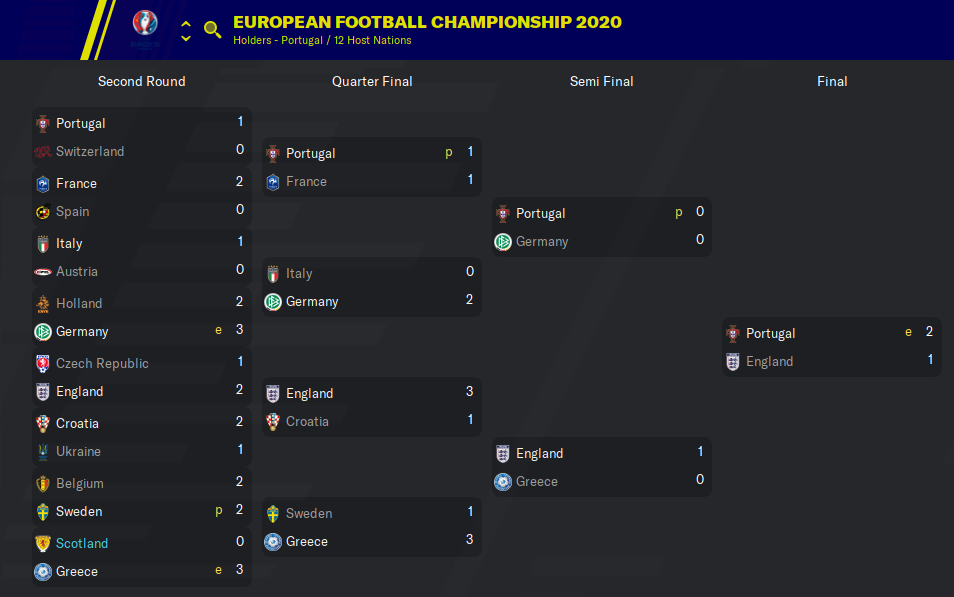 @Griffo;
Aye I have been updating as I play which is quite easy with a national team as you don't play much so there's a limited amount of games which increases the amount of time I have to update. Thank you.

@TheLFCFan
Thank you! It definitely did but as you can see it all came crashing down. Thank you I have fixed that now.

I definitely think that the update to the game has caused this defeat as that tactic was doing really well and beat far better sides than the Greece one I just played. That's the game though so what can you do.
Login to Quote

ScottT
1 year
After an incredible group campaign, to lose out to Greece so comfortably albeit over extra-time must have been a disappointment. As was England losing in the final...

TheLFCFan
1 year
Heartbreaking result that mate. Having done so well throughout the groups to fall off like that in the knockout round. However, it is still the best that Scotland have done in years so it is a great place to build on!
Login to Quote

Imagine
1 year
@ScottT;
The game could have went either way right up until they scored, it was my first match since the update from Beta which I am totally blaming

When, and because of the time they scored, I had to go for it and got thumped as a result! Yeah that was the only good part....

@Murray_C11;
YES! Exactly what I was hoping to put an end to

@TheLFCFan;
It was mate, teams I beat in the group were much better as well! Cheers :)
Will be updating in the next few days, back at work and also started a Rangers save but will get back to it!
1
Login to Quote


After a fantastic run in Euro 2020, where they reached the 2nd round, Scotland will be hoping they can build on their upturn in fortunes. It is Russia and Bulgaria who Scotland will face off with in the first round of fixtures in the tournament and they will be hoping to capitilise on their recent good fortune against the Russians. The Scotland squad has been announced and featured a few surprises; Liam Cooper, Alex Mowatt and Joe Chalmers have been dropped whilst Oliver McBurnie misses out through injury. Youngster Billy Gilmour is in line to make his debut after impressing on loan at Bristol Rovers last season, Jason Cummings returns to the fold after a blistering start to the season with Shrewsbury after netting 18 goals in the previous season too and finally Greg Taylor comes in for Cooper meaning that Kieran Tierney could well be used in a central position.

Ahead of the game against Slovakia Jason Cummings pulled out of the squad through injury and was replaced by St. Johnstone's Stevie May. Quite surprisingly May actually got the nod to start against Slovakia. Scott Bain was tipped to start in goal but Craig MacGillivray retained his place after back to back clean sheets. After a blistering start to the match, with shots flying in at the Slovakian goalkeeper, Scotland eventually got their goal after half an hour as that man May got on the scoresheet to justify his start. Andrew Robertson's cross was side footed in by May who got his first Scotland goal in his second appearance, six years after his first. Despite going on to entirely dominate the match with over 60% possession and 26 shots it was just the solitary goal to speak of in this game as Scotland pulled off another narrow win.

Having made it three wins on the trot it was up to the Russians to end Scotland's winning streak and they had every chance with the game being played on their soil. There was three changes to the Scotland line up as Kieran Tierney, David Bates and Callum McGreggor were handed starts ahead of John Souttar, Scott McKenna and Matt Ritchie. As it was, Scotland were very lucky to go into the break with the scores level as Russia bombarded Craig MacGillivray's goal but he stood tall and came out the best player of the half. The second half was a lot better from Scotland but alas, they couldn't find the net but luckily, neither could Russia.
Login to Quote

ScottT
1 year
A pleasing start to proceedings. Glad to see you back.
Login to Quote

Cheers mate, as good a start as I could've hoped for.


With their Nations League getting off to a fantastic start with back to back wins over Russia and Bulgaria Scotland manager Christopher Burns stuck with mostly the same squad this time around too. The changes that were made were the inclusions of Scott Bain and Callum McGreggor. McGreggor returns from injury after pulling out last time and he takes the place of young Billy Gilmour who didn't manage to make his debut last time, unlike Lewis Ferguson who wasn't even in the original squad. Bain returns to the fold after making the number one jersey his own again at Celtic after Fraser Forster returned to the Southampton bench and Craig Gordon was dropped. The continued absence of Oliver McBurnie due to injury means that the misfiring trio of Jason Cummings, Lawrence Shankland and Leigh Griffiths remain the best striking options available.

You are reading "O Flower of Scotland".