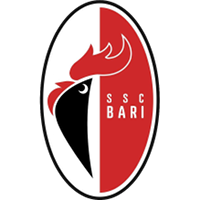 Società Sportiva Calcio Bari, commonly referred to as Bari, is an Italian football club founded in 1908 and based in Bari, Apulia. It currently plays in Serie C.

The club spent many seasons bouncing between the top two divisions in Italian football, Serie A and Serie B. The club was formerly known as A.S. Bari or F.C. Bari 1908 as well as other names, due to re-foundations.

During 1927, the original football club representing the city was merged with a team named Liberty Bari, a year following this the new club was merged too, this time with US Ideale; hence the sometimes given foundation date of 1928.

Statistically Bari are the most successful club from the Apulia region, in terms of the all-time Serie A records. They are amongst the elite in Southern Italian football and are ranked 17th in the all-time Serie A records for all of Italy. Notably they won the Mitropa Cup in 1990. Bari also held the British football transfer record, when it paid £5,500,000 for David Platt in 1991. It was the most expensive fee paid by a foreign club for a British player for four years.

One of the most notable achievements in the club's history was in the 1996 season, when their forward Igor Protti became the top scorer in the Serie A with 24 goals. The club are known in the wider footballing world for producing Antonio Cassano who was born in Bari, he shone at the club as a youngster.

On 16 July 2018, Bari were excluded by Co.Vi.Soc. from participating in 2018–19 Serie B due to financial reasons. The shareholders also tried to recapitalise the club and appeal the exclusion to Collegio di Garanzia of Italian National Olympic Committee (CONI), however, it was rejected.

Thanks to the Article 52 of N.O.I.F., it was reported that Aurelio De Laurentiis, the owner of football club Napoli and film company Filmauro, had won the rights to establish a phoenix club of Bari and restart in 2018–19 Serie D. He also re-established the current Napoli in 2004. The new club will be named S.S.C. Bari, with De Laurentiis stating his intention to bring it back to Serie A as fast as possible. The club was subsequently assigned to Group I of 2018–19 Serie D, traditionally destined to teams from Sicily and Calabria. 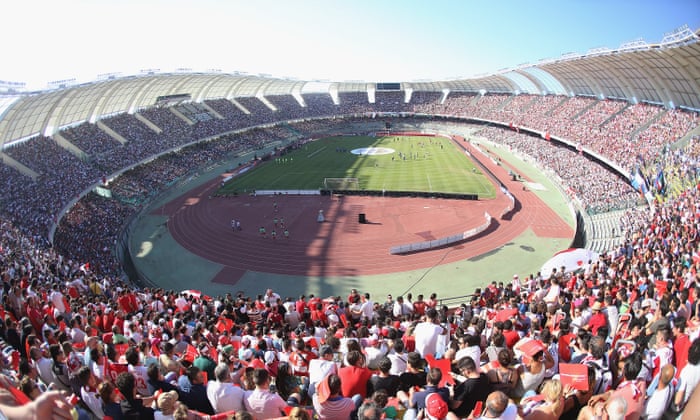 The Stadio San Nicola (English: Saint Nicholas Stadium) is a multi-use all-seater stadium designed by Renzo Piano in Bari, Italy. It is currently used mostly for football matches and is the home stadium of F.C. Bari 1908. The stadium itself resembles a 'flower'. To create this particular design, the stadium consists of 26 'petals' and upper tiers of the higher ring which are separated by 8-metre empty spaces, sufficient to guarantee satisfactory security conditions.

With this stadium we can use it to bcome a real force in Italian football if we can get close to selling it out every week.

ScottT
1 year
Hopefully you can recreate your success at Bolton with Bari, but perhaps to a more realistic extent.

leckuno
1 year
The Manager
With no manager at the club they were in real peril going into the season. Who are they going to get all the fans were asking.

The chairman had a large number of applications come through his door with not a lot of good managers being amongst them but there was one standout application and he couldn't believe it when his eyes fell upon it.

The prodigal son of Bari has applied for the role. It will be his first job in management since retiring from football in 2017. More importantly he is returning to his home town club where he started on his illustrious career. 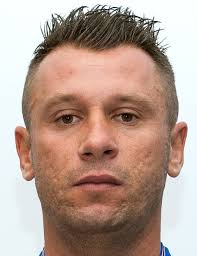 Cassano initially joins the club on a 2 year contract earning £3,700 a week.

He brings with him a wealth of experience having previously played for some of the best clubs in the world including both teams from Milan and Real Madrid. He also managed 10 goals in 39 appearances for the national team. His biggest regret though is that he missed out on the squad that lifted the world cup in 2010.


His main aim will be to get Bari promoted at the first time of asking as the champions before stabilising the club in the Serie BKT.

Griffo
1 year
Best of luck with the mighty Bari!
Login to Quote

ScottT
1 year
What an appointment. Very much a love-hate character as a player!
1
Login to Quote

Not the best of preseason's as we won 2 and drew 2 but I guess we didn't lose any which was positive. Preseason was also cut short by our participation in the Coppa Italia Di Serie C

I've shipped out the players I'm not interested in keeping to free up the wages and bring in a wee bit of money for transfers. 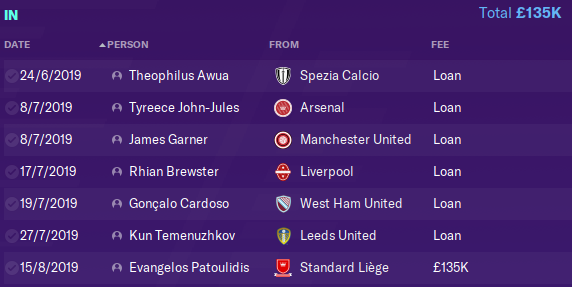 Coming in we've hit the loan market like a large number of Italian clubs do since you can play as many loan players as you like so I feel we've done well with some of the young players we've been able to attract with paying very little of their wages. We bring in one player though from Standard Liege and I believe we can get the best out of him and sell him for a big profit if all things go right.

Well it looks like the stadium is going to be pretty empty this season but it gives us hope for building a fan base and getting them back in to make us some serious money.

Hoping with the players that we've brought in then this shoudl be pretty straight forward and our real challenge will start from next season.

ScottT
1 year
Raiding the English leagues for young talent on loan. Looking forward to seeing how they all fair in Bari colours.
1
Login to Quote

Not the start we really wanted in our first competitive game but the players are still gelling together and learning the tactics. We are treating the cup games like friendlies but we scrape to a win here thanks to an own goal.

Again we really struggle here against a team we should be beating but we get a late goal which see's us progress to the 1st round where we have been lucky enough to receive a bye so we automatically go into the 2nd round.

Finally things are starting to come together here as we finally manage to score 2 goals in a game thanks to Brewster with a great goal in the final minute of the game.

We finally find our coring boots properly here in the first half but as they say this really was a game of two halves. 3-0 up at half time it looked like we would run away against one of our fierce rival but our defence decided it wasn't going to come back out for the 2nd half as they nearly cost us the 3 points.

cheers mate, fully expect the first season to be a canter with the players I've brought in on loan. Real challenge will be next season with trying to stay up
Login to Quote

Brewster and John-Jules finally showing what he can do in this league and cause the defence a whole number of problems as they bag 3 goals in the first half. 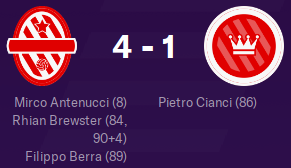 The board decided to throw a fan day here to try and get as many fans through the door as possible to see Cassano back at the club and the boys delivered as they run out big winners. The crowd was just under 15,000 leaving just under 40,000 seats still empty in the stadium but the board saw it as a success.

Brewster just can't stop scoring at the moment as he gets his 6th goal in 3 games. He is far too good for this level but won't find me complaining. 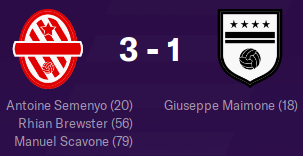 We fall behind for the first time this month and are drawing going in at half time. The unpredictable nature of Cassano saw him go in at the break and start throwing stuff off the walls behind the players. This gave them the kick they needed to put in much better performance in the second half.

After the showing in the first half of the last game Cassano decides some the of the players weren't worthy of a stat so rotates a chunk of the first team. Luckily it works and they take their chance as Terrani backs a quick fire double.

Who needs strikers when you've got a left back that can bomb down the wing and cut inside to score two cracking goals to put the rest of the team to shame.

We concede early but with Cassano shouting obscenities from the touchline the players get the fear and put in a great performance. 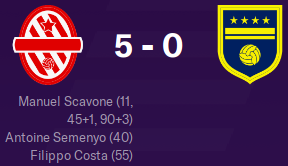 The only disappointing part of this game was the fact we concede a goal in the final minute to stop another clean sheet.

A much better performance from Brewster in this game as he was starting to worry us with his lack of goals across the previous games.

Another complete performance here as we manage to limit Rieti to 0 shots on target which is a first for this season so long may it continue.

ScottT
1 year
Flying. I don't think I'd want to mess about with Cassano as my manager, in all honesty!
1
Login to Quote

Jack
1 year
Pitch perfect start to the season, I think the rest of the division might as well succumb to the impending domination of this season's Serie C winners!
1
Login to Quote

Another late goal conceded here sends Cassano into a mad rage as the players are starting to shut off at the end of games when they are comfortably ahead. Maybe the players will think twice now 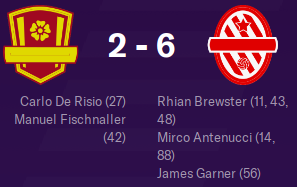 We get a big win in the cup and its good to see both our strikers getting on the score sheet with 5 goals between them.

Yet another goal right at the death, clearly the bollocking wasn't enough last time. Cassano now threatens that a player will get the sack if it happens again.

The clean sheets keep coming now as the players just don't know how Cassano will react if they even concede a goal. 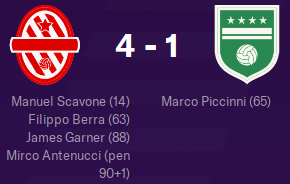 You are reading "SSC Bari - I Galletti".