ScottT
9 months
When are you going to drop points?

JuddeaLCFC
9 months
Really good save so far! Cassano doing bits at Bari!
This has made me want to start a lower league save in Spain with my grandparents hometown, Algeciras! Think i’ll be starting that tonight!
Keep up the good work!
1
Login to Quote

2019-12-17 12:17#264024 JuddeaLCFC : Really good save so far! Cassano doing bits at Bari!
This has made me want to start a lower league save in Spain with my grandparents hometown, Algeciras! Think i’ll be starting that tonight!
Keep up the good work!

Cheers mate. Always good to inspire people to start their own saves
Login to Quote

We keep our clean sheet record going in the league here as the defence is still terrified of what might happen.

Back to conceding a late goal again here so the day after the game Cassano is sitting in his office wondering how to get his point across so he waits for the first player to walk past his office and calls in 17 year old Alessio Donato Pesce and sacks him on the spot not caring about his future in the game. 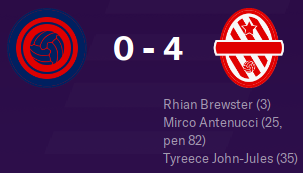 I'd love to say it was a close fOught match but we put in a complete performance as we limit Vibonese to 0 shots on target. 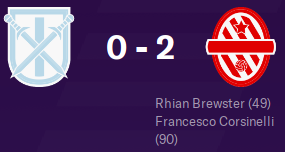 The defence has upped it's game again now the fear is back as we get another clean sheet in the league.

I'll reserve judgement on the Golden Generation until it arrives in March and see what its really like. 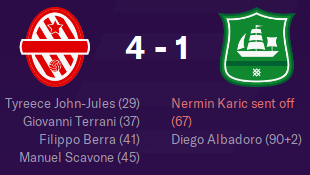 We come up against our fierce rivals again and hammer them but we concede another late goal so another youth player loses out with a future with the club. Cassano has assured the first team next time its one of them thats leaving. 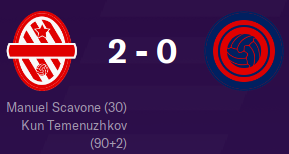 A much better performance from the team as the fear of job loses now hanging over them means they keep a clean sheet.

For a change even though we conceded a goal our defence actually kept us in the game s it could have been even more as they had a the majority of the possession and we just took our chances.

The squad really did't need anybody brought in but the two permanent signings were bargains for their potential and the deals were just too good to turn down.

The two loans were just to see what would happen with more depth at RB and more fire power upfront.

The team shows its true character here as after going 1-0 down after 11 minutes it really looked like we were going to fall to our first defeat but John-Jules comes to the rescue and gets a brace to keep our winning run going. 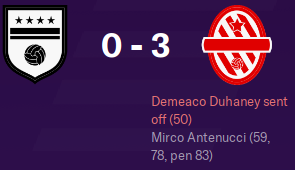 Even when we only have 10 men we're far too powerful for this league as our veteran striker get an excellent hat-trick. 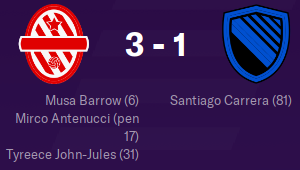 With the play-offs in the bag now then Cassano has now mellowed out as there were no sackings for the late goal conceded here. 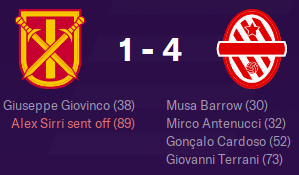 The cup final spot is as good as ours now after a commanding victory in the first leg here.

We were extremely lucky here to take this game as we were out played for large parts of the game, we were just able to take our chances when given them.

A much better performance here as ou defence are much better and the veteran striker is our hero again.

We really struggled to overcome them here but with Cassano giving the players the hairdryer treatment at half time that was enough for them to get the breakthrough and leave us needing 3 points to secure the title.

ScottT
9 months
Never mind an unbeaten season, will you drop a single point?!
1
Login to Quote

With the final already in the bag from the 1st leg we rotate the squad here and we scrape a win to send us through to the final with a 5-1 aggregate win.

Most people come back into the team here and we do enough in the opening 30 minutes to give us the title which is always nice to win it while in front of your own fans.

The budgets are in for next season so it will be interesting to see what we can do with it as we will need a lot of new players.

First leg of the final and before kick off Cassano put the boot in threatening the team with Job losses again if they didn't get the job done in the first leg and it worked as the veteran Antenucci produced superb performance to get a brace.

Our toughest game so far of the last couple of month as it was a true challenge but we scrape through to keep our 100% win rate.

Brewster was called into Cassano's office the night before the game as his goal drought is just growing. He is given the challeng to brak it or find himself out the team for the remainder of the season. The fear clearly works as he gets an excellent brace and was unlucky not to get his hat-trick.

Antenucci is certainly trying to win himself a new contract as his £12,000 pw deal runs out at the end of the season but at 35 his future is done under my rule. 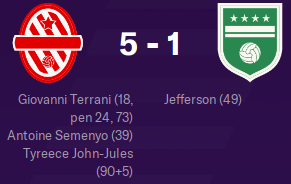 A great win to end the month as Terrani scored the perfect hat-trick with him cutting in nicely off the left wing either side of a penalty.

So it looks like the golden generation might have paid off with 2 players looking like they may make the cut. Peri is the stand out candidate though and can hopefully be at the centre of defence for years to come.

A nice easy win to set us up nicely for the rest of the month where we were able to give some part time players a chance to impress.

A game of two halves here as the first was a cracker which the fans deserved but the second was awful with not much happening which meant Cassano wasn't too happy but luckily his wrath was kept under control thanks to the win. 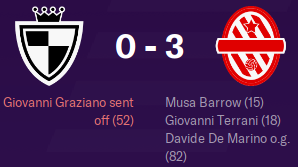 With us carrying a 3-0 lead I gave Peri his debut to make him the clubs and competitions youngest ever player and he sows how good he can be by being a rock at the heart of our defence which gave us a 6-0 aggregate win.

On a high from the cup win we keep our starting lineup meaning Peri is now the youngest player to ever play in the league. We fall behind half way through the first half. Cassano is running up and down the wing threatening players if they don't get their act together and it actually works as we come back to get the 3 points. 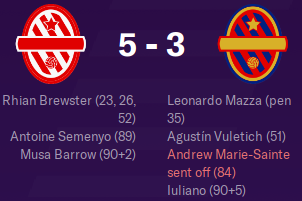 What a game to finish off the season as it has a bit of everything and we take it to the final few minutes to give them the most exciting 5 minutes of football all season. We walk away with a 100% record in the league which is once in a lifetime opportunity.

A nice easy victory after falling behind to take the super cup to the final game.

A fitting way to finish off the season see's Antenucci score from the penalty spot in his final appearance as a professional footballer to hand us the treble in our first season.

You are reading "SSC Bari - I Galletti".