.Matthew
2 years • Edited
Okay, so there goes my first post and the reason why I actually came here.
I noticed buy surfing on the web, that a lot of FM's players use spreadhseet, and I always thougt I was the only one.
Through the year I have improved mines and it became a vital tool for all my saves.

My question is, what kind of spreadsheet do you use ?
Below is the main spreadsheet that I use, I think that would be usefull for some of you.

The idea is to have a quick view of my players abilities and what roles suits them best. You can tell the flaws, the best attributes and the profiles of every player with a quick look.

In red are the ratings below 10, and the cells in pale blue are the top 3 attributes/roles.
In dark blue is the role that I personally use in my tactic.
Obviously it's in french but the order of the statistics is the same as in english.

The "profils" section is something I actually made up. For instance, the "vitesse" is actually the Pace of the player, and it's a product of two statistics : speed and acceleration.
Second exemple : the "qualité de passe" is the player's ability to make the right pass, at the right time, at the right aim and power. It's a combinaison between the "passing", "decision" and "creativity".

There are sheets for every positions on the pitch : goalkeeper, central defenders, right/left back, central midfield, left/right wing and forward.
I update this sheet every season as stats change everytime.

Team Stats
Inside the same file, I managed to do a global team sheet, it shows you an average rating of every player composing your team. Again you can see what's wrong or not with your team. Could be usefull if you want take a new team and don't know what tactic you can use.

For instance, here above is the 2019/2020 Barcelona squad. The three top "profils" are : "passes quality", "player intelligence" and "composure". Pretty obvious for one of the main possession team on the game.
In the other hand, the "aerial threat" rating is 10.48 which is pretty terrible considering a team that includes Piqué, Umtiti, Lenglet or even Todibo.

Eleven Stats
Still inside the same file, the last sheet. By entering the names of the player composing your current eleven, Excell will calculate everything : the average rating, the speed of your defenders, the creativity of the midfielders you use, eveything.
In this case, it shows a 4-3-3 with the roles of everybody on the left.

How can I read that ? Let's take Barcelona again. The "défenseur central" means central defenders, here Umtiti and Piqué.
At first, I wanted to know if I could defend with an high lign. So I take everything needed in consideration : the pace of my two central defenders, the anticipation, the composure.
I also want them to be good with the ball, so I also put the passing ability and the smartness of the players.
You can see an average above 15/20, which is pretty fantastic. You would obviously need to take the statistics of your wing back and your defensive midfielder into consideration to make a decision, but again, this is a statistic tool.

Then I have made a spreadsheet for every player.
You can see the potential and the evolution by filling the sheet every season.
At the far right are the potential ability from Genie Scout, still blank cause I don't have FM20 yet, and the potential from FMDataba.com

There are sheets for every position as well on this file, it allows me to see if a player is versatile and can develop in another position. For exemple, the Lionel Messi file contain a central midfield sheet, you can see through the years that his physical abilities will go down, and that he can actually became a beast with a lower position on the pitch.

Obviously all the sheets contains formulas and are automatics. The only thing you need to do is : completing the stats of the player.
I have blanked templates for every sheets you can see above, so don't be afraid to ask.

Don't hesitate about giving me advices or any ways to improve them.
1

unitedmanager
2 years
Hi. Really found this interesting. Any chance I could get a copy of this template. Would like to give it a go in my save
Login to Quote

.Matthew
1 year
Hey, thank you for the feedback.
I've updated those spreadsheets for the 21 version.

Here are your templates.

Looking forward for your feedback !
Login to Quote

.Matthew
1 year
If you want to know what the 21 version looks like here we go.

Here is the spreadsheet that I'm using with my Stabæk save on FM21, here set on the forward players. Keep in mind that you have one sheet per position: 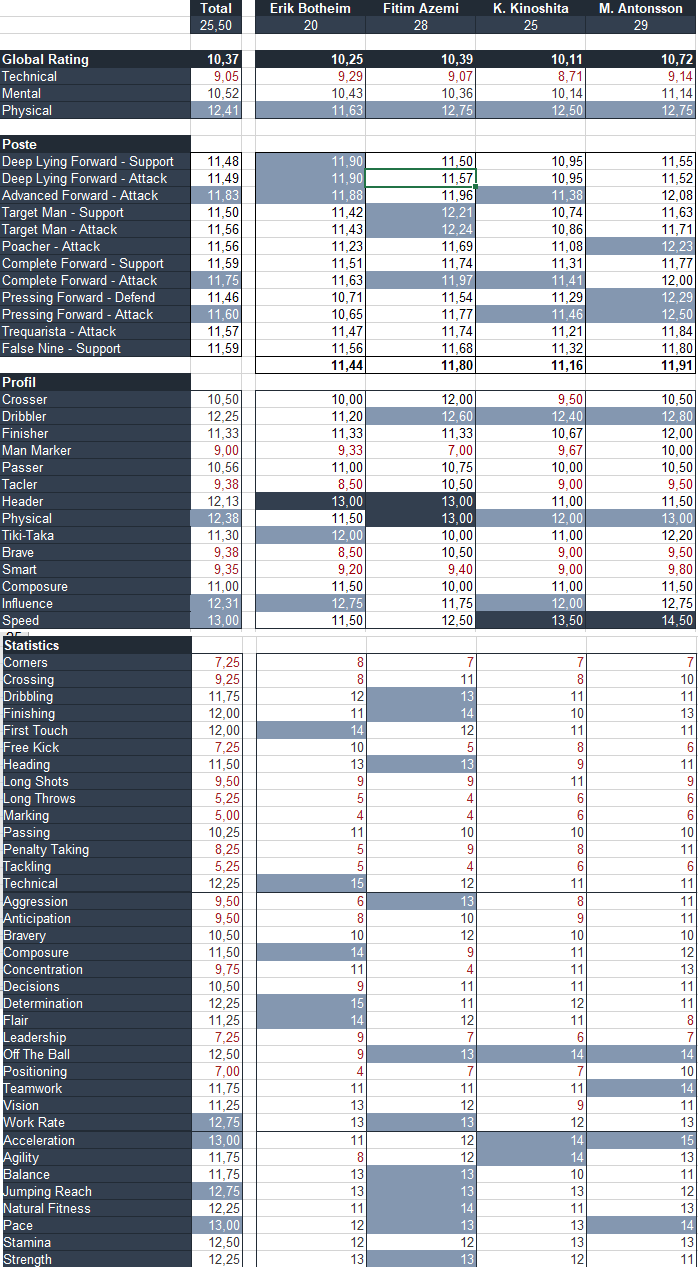 And the individual stat sheet of one of my player (in french but the template above is in english) : 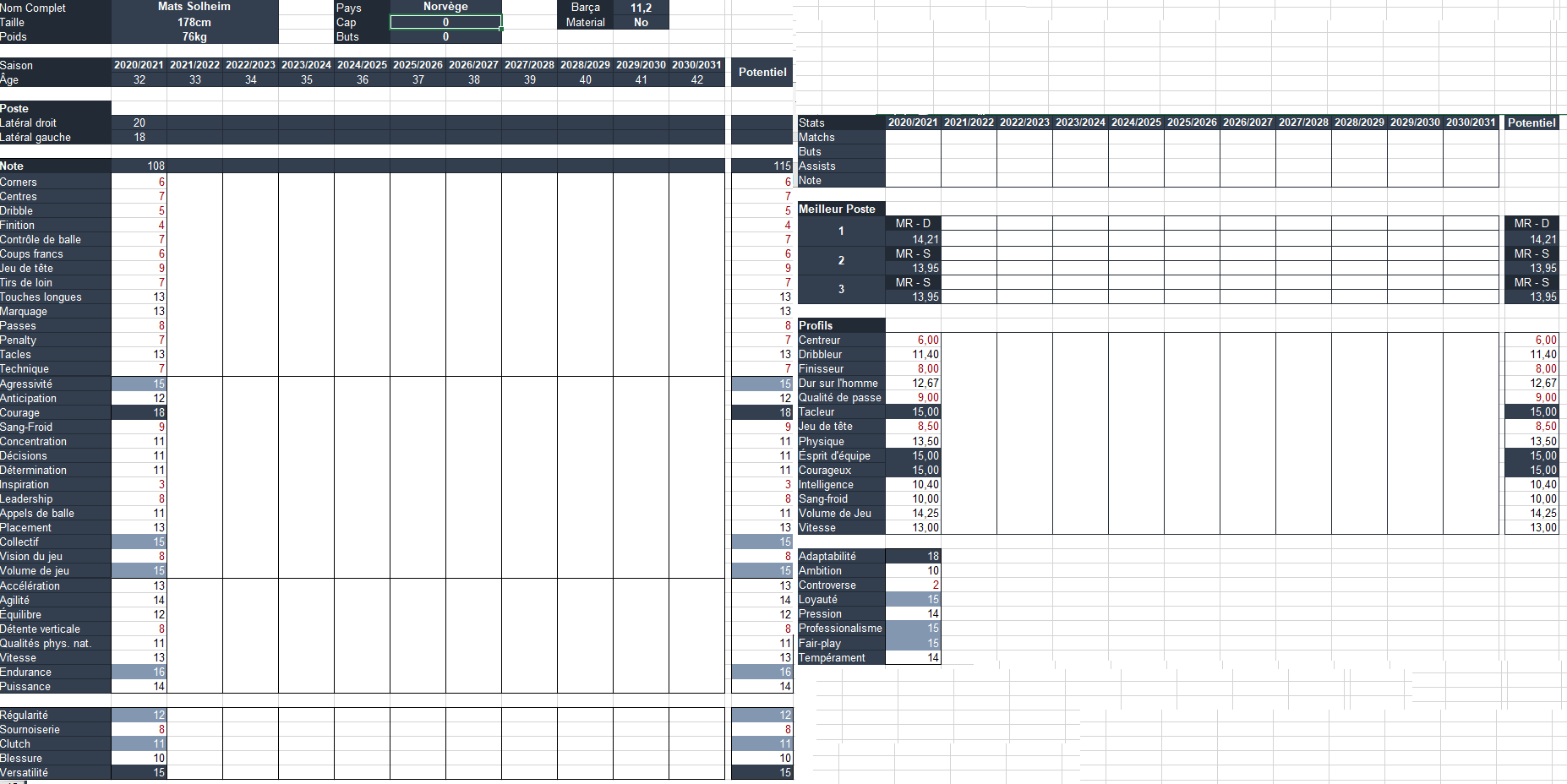 Here is the spreadsheet that I'm using with my Stabæk save on FM21, here set on the forward players. Keep in mind that you have one sheet per position:

And the individual stat sheet of one of my player (in french but the template above is in english) :

You are doing a great job man...I'm writing down a number of my youngsters' attributes and where they need to work on and I will note down the increase in their attributes!
Login to Quote

koafri
1 month
Probably not see this now, but just wanted to say a big thanks for sharing these spreadsheets, they're great!
Login to Quote

You are reading "Spreadsheets ?".