FmGade
6 months
Hello!
Welcome to my (mini) blog about Fiorentina, where i will try to tell you about my save. It's my second save this year, so lets how it goes. I have downloaded a name fix, so Juventus is back and so on. English is not my first language, so i hope you can live with some fails.
Login to Quote

Griffo
6 months
I honestly had forgotten AVB existed... haha good luck with this
Login to Quote

FmGade
6 months • Edited
Here are some history of the club from Firenze, i hope to get some trophies to one of the most beautiful cities in the world. 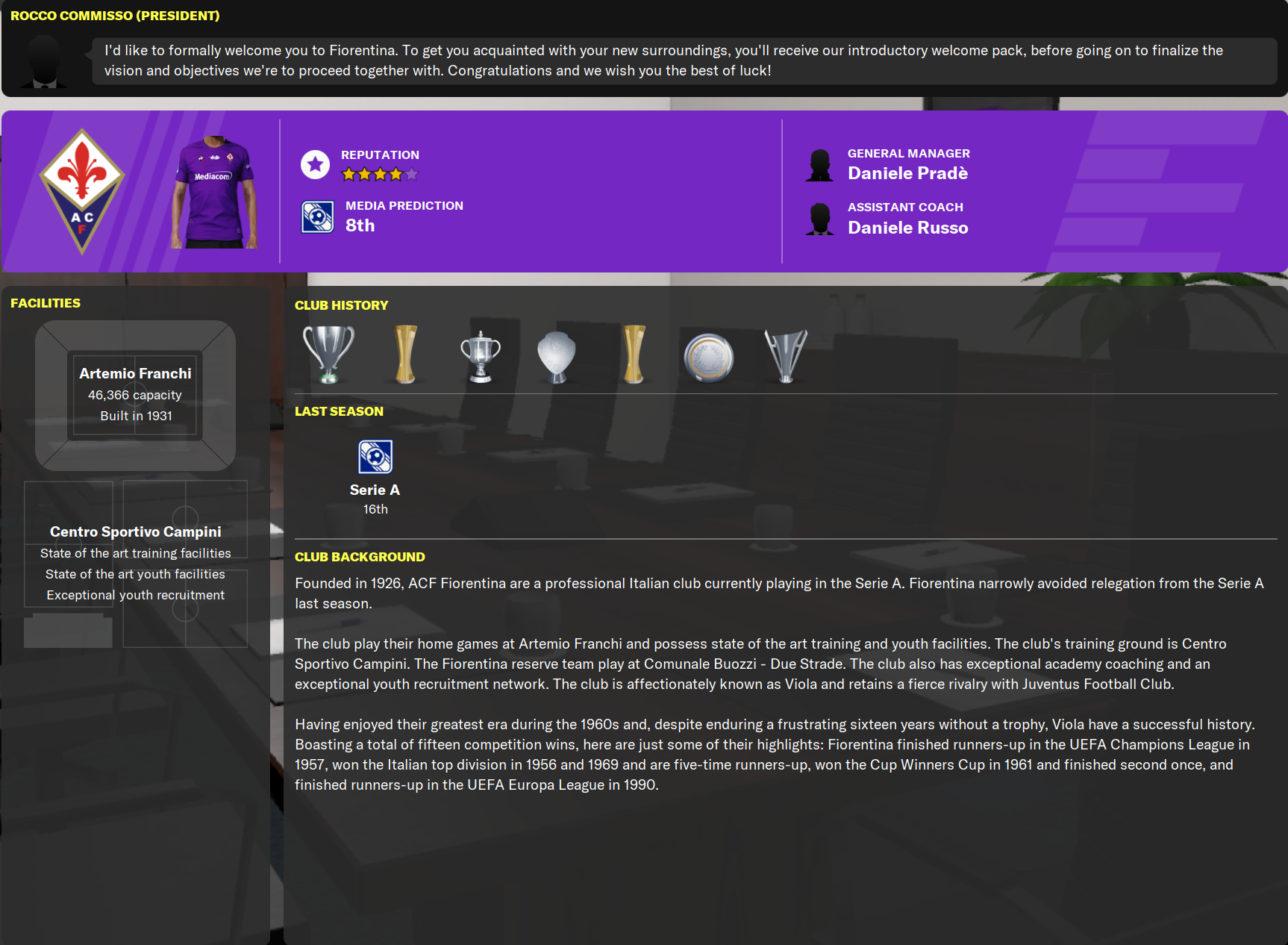 The club have some things they want me to focus on, most of them fits great, so lets see if i can live up to it. I will try to get a lot of young, talented players through the club and maybe some great italien players.

In my first transfer wind, i tried to focus on the Club Vision. I bought 14 young players, some off them from Italy. I did't have so much money, so i will try to get the best out of my squad that i started with. 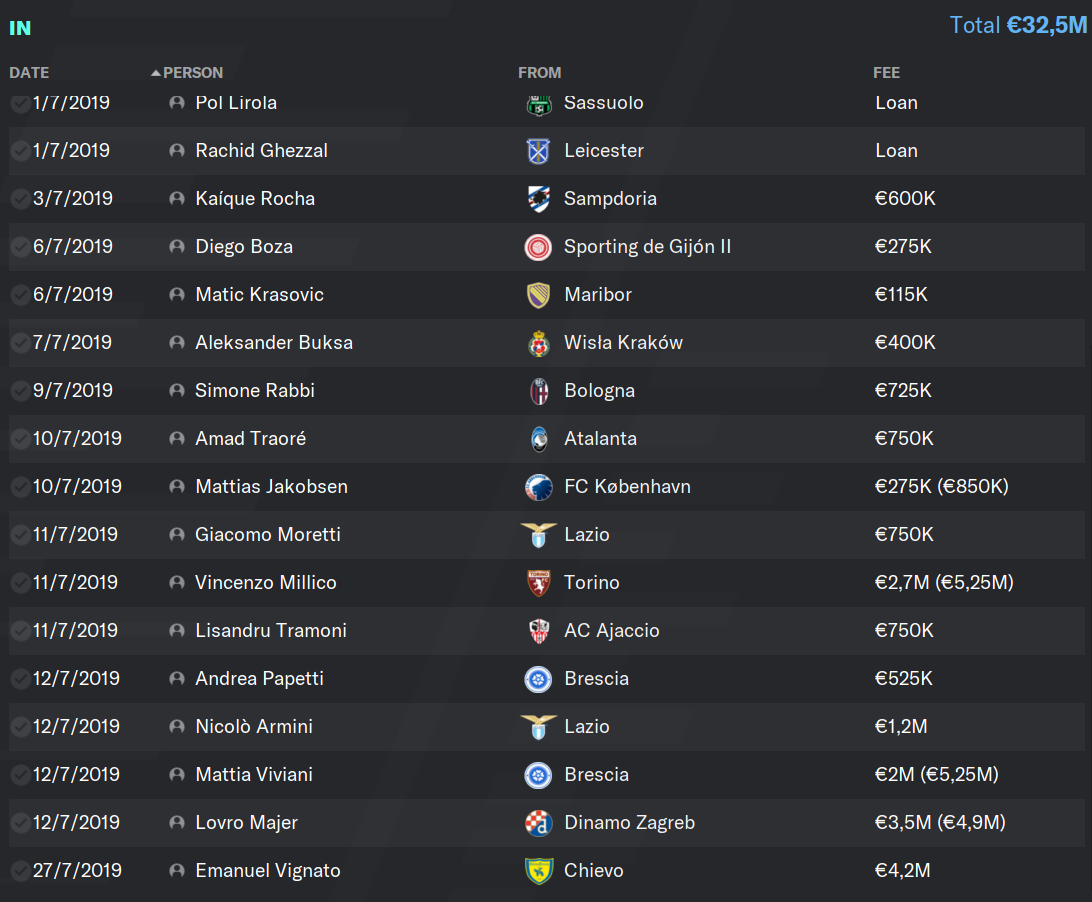 RumDrunkRacoon
6 months
Best of luck! You have some bargains there I believe, I'm sure the majority will turn out to be great signings.
Login to Quote


Thanks, Majer is the only one i will use straight away. Vignato, Viviani, Armini & Millico are going on loan to serie B clubs to get some playing time. The rest of the young guys is gonna play for the youth team.


Thank you mate, hope you will read along.


Thank you Scott, hope you will stay with me!
Login to Quote

Griffo
6 months
Some great signings here, big fan of Viviani from my Brescia save, I am using Tramoni currently he has been steady with flashes of brilliance, interested to see how all this talent performs.
Login to Quote

Griffo
6 months
Some great signings here, big fan of Viviani from my Brescia save, I am using Tramoni currently he has been steady with flashes of brilliance, interested to see how all this talent performs.
Login to Quote

2020-01-18 22:13#265518 Griffo : Some great signings here, big fan of Viviani from my Brescia save, I am using Tramoni currently he has been steady with flashes of brilliance, interested to see how all this talent performs.


He is doing well on loan, so i think im will use him in the second season!
Login to Quote

FmGade
6 months
If you guys have some suggestions to players i should keep an aye out for, just let me know! Could be fun if you guys help me as my scout! 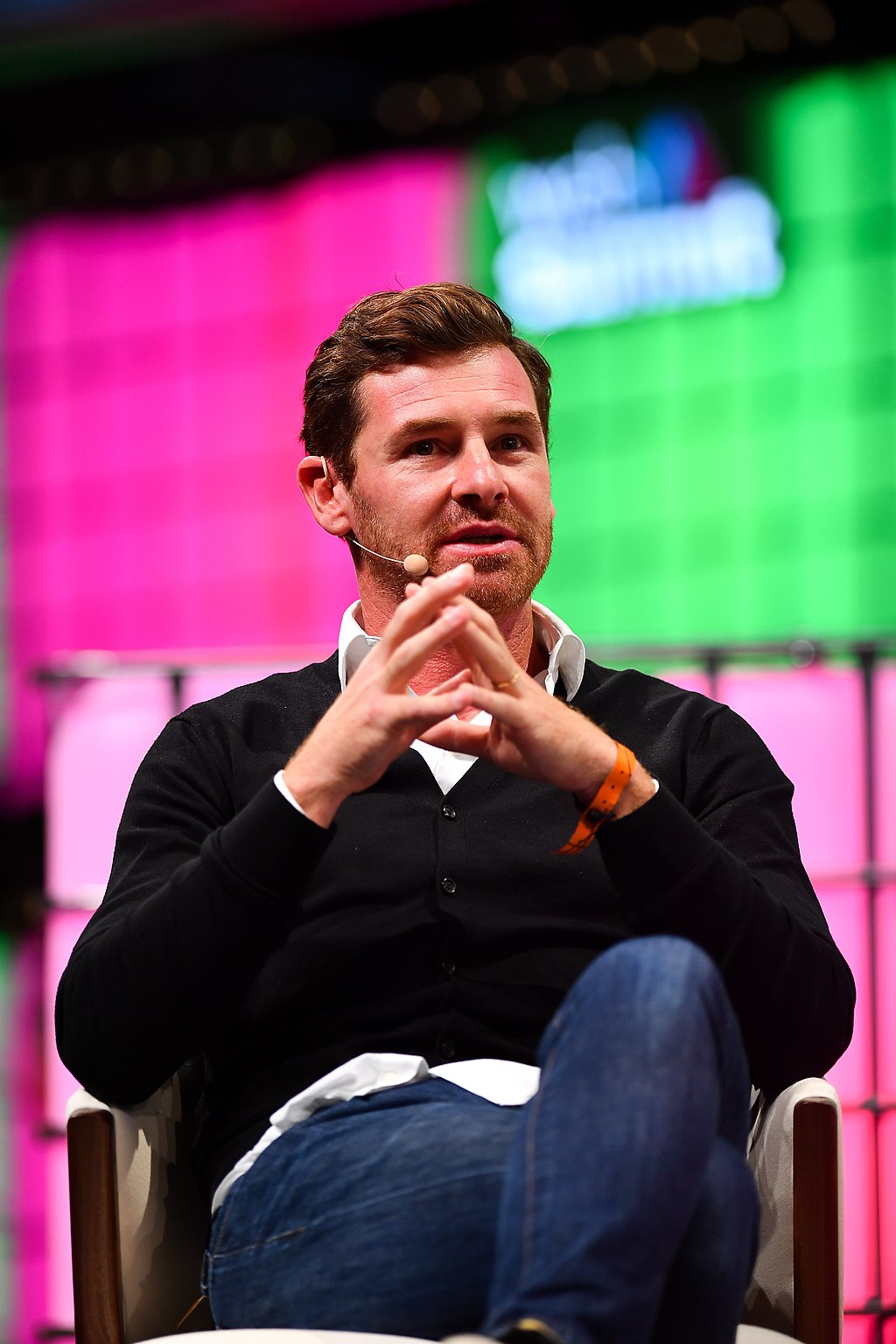 A interview with the new Viola coach, AVB by Gabriele Marcotti
GM: Welcome Andre and congratulation with your new job. It's your first job in Italy, do you think it will be a challenge for you?

AVB: Thank you. Yes, i hope so. Thats why i took this job, i like a good challenge, so when i talked to Rocco (Commisso, the owner) the first time, he really sold my the italian dream.

GM: So how do you see Serie A compared to the Premier League?

GM: So what will the goal be for the first season with Viola?

AVB: The board and i agree that we should try establish the club in the top again. Such a big club deserves to be at the top every season. I will be happy if we end in top 7.
Of course in the long run, the goals is to end in top 3 and get medals and get the chance to play Champions League.

GM: What are your thoughts about the squad?

AVB: I think we have a good squad, that could win over any time if anything just clicks. We have many young, talented players, Chiesa is a star player, one of the best in the league. But also old players like Ribery & Boateng that still are great players. I hope lot of the young players will grow under me and take the step up to be stars in the future.

GM: What about tactic? in Chelsea and Tottenham you played 4-3-3 if i remember correct.

AVB: I think it's time to try something new. I have some time to see a lot of football in the last year, here in Italy there is a great tradition for playing 3-5-2.
When i look at the players i have available, i think we should play with 3 at the back. Rasmussen to the left and Milenković to the right and then the place between is open for the others players to fight for at this moment. We have some strong players that shall play like wingbacks and run up and down the line for us. 3 players on the midfield, so we can dominate the game. Pedro will be one of the two strikers, where i will try to get the best out of Chiesa. But some times we can and will chance the tactic. You can't play the same tactic every time against every team. I have some fast wings that deserves to play also.

GM: Thank you the the time and good luck!
Login to Quote

FmGade
6 months
First game of the season was in Coppa Italia, where we beat Livorno. 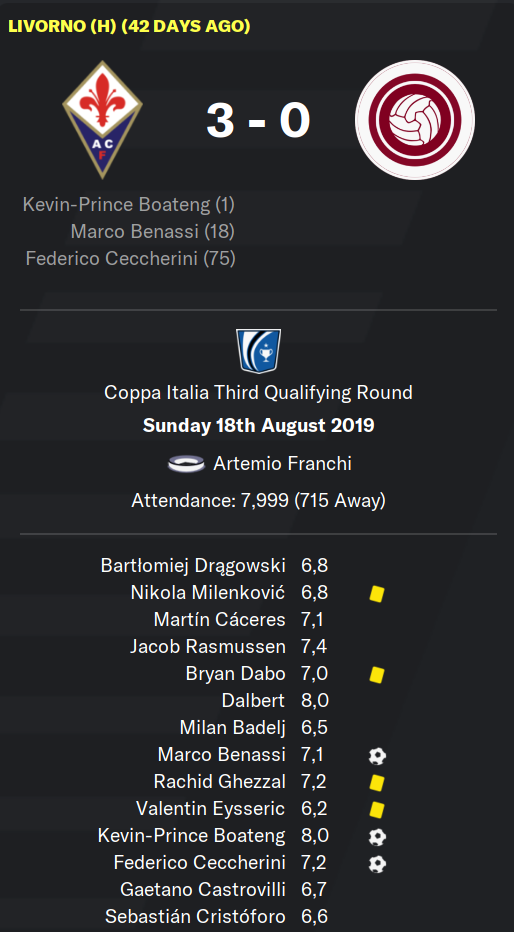 First League game of the season was a draw 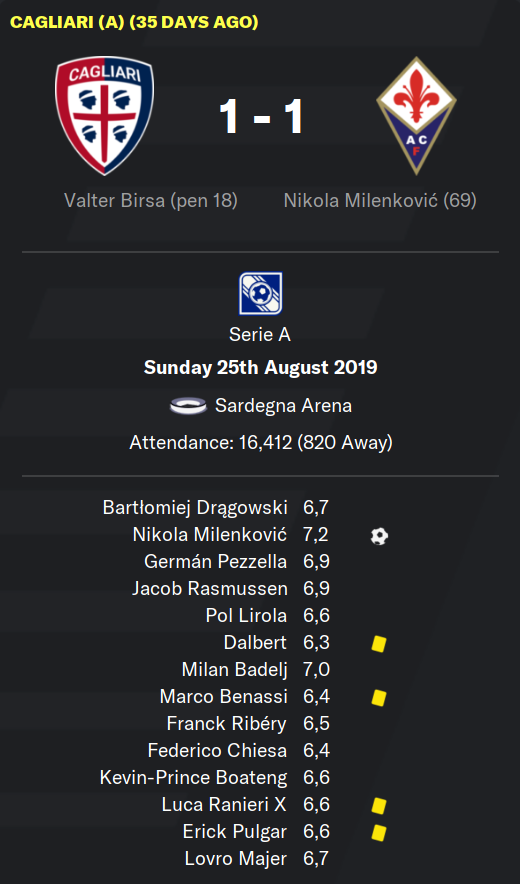 First home game of the season was a win, where the wingback Dalbert played a great game. 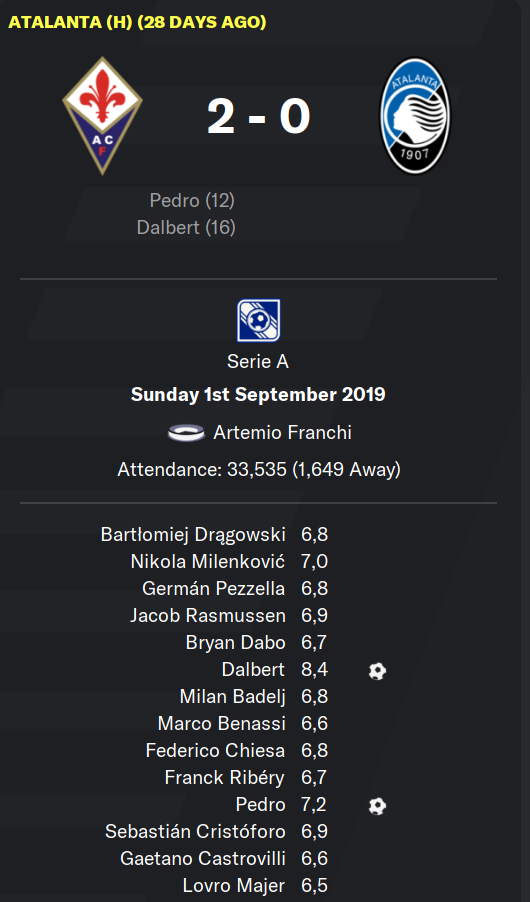 Pedro, the brazil striker really got his season started with a 7 minute hattrick. 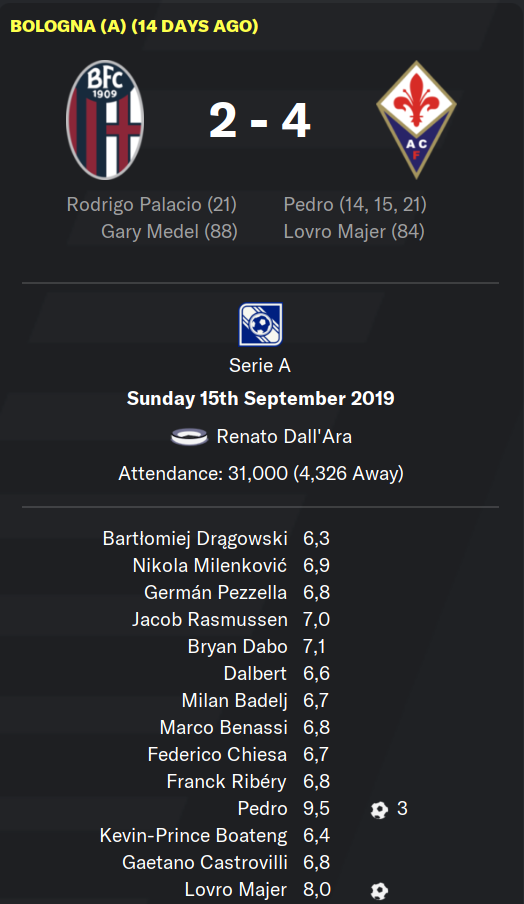 Then another win at home. 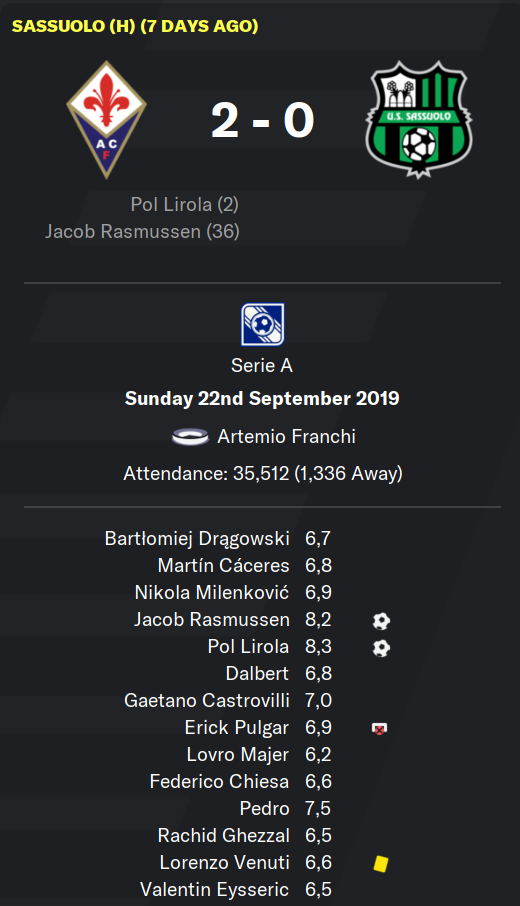 Montiel, Sottil, Vlahovic got their first game, and what debuts for the 3 young guns. 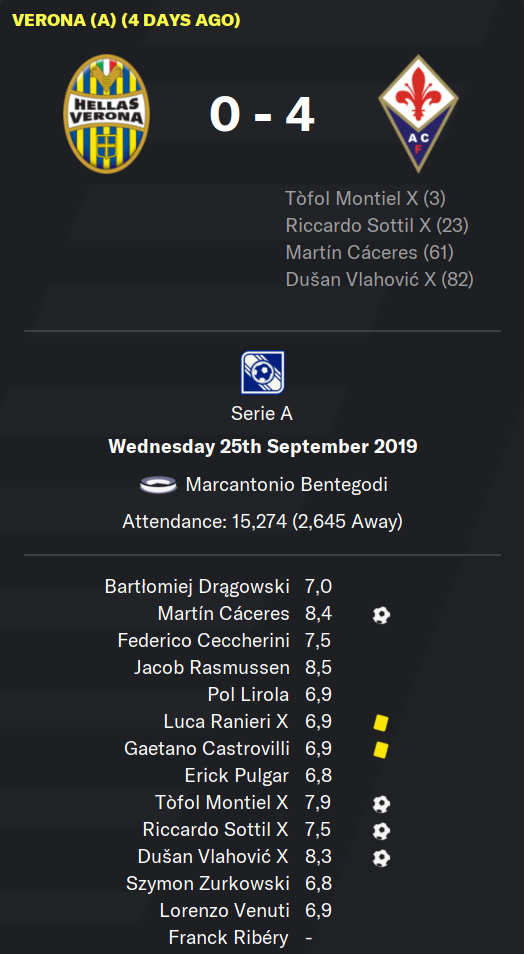 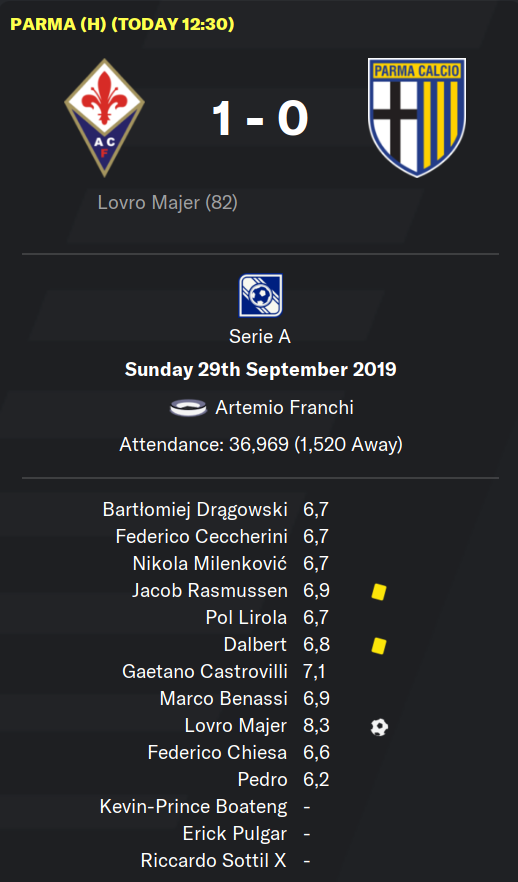 So far, so good. 6 games in the first season, we are on top in Serie A and still unbeaten. 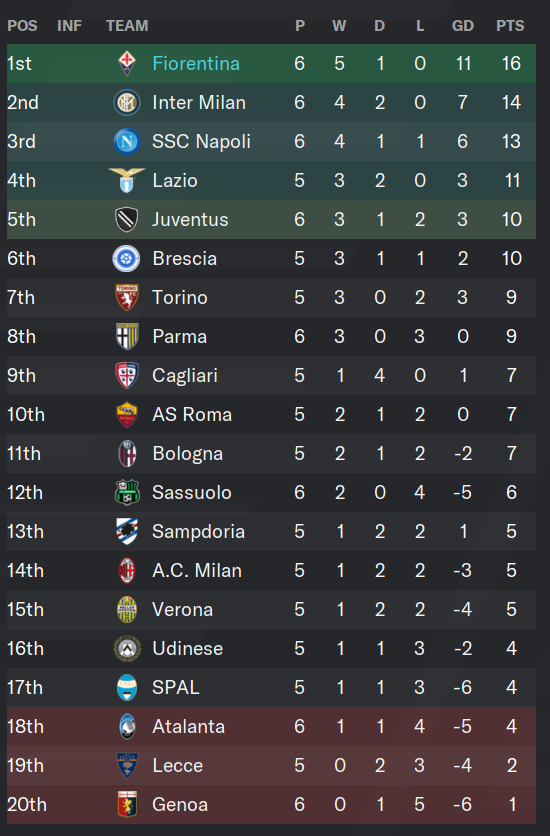 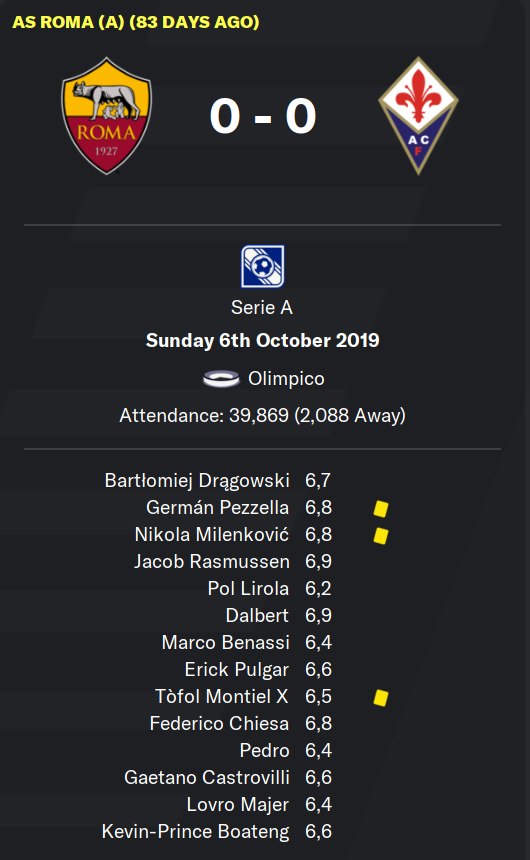 The first defeat in the season, one man up and still loss it all in 90+3 minut. 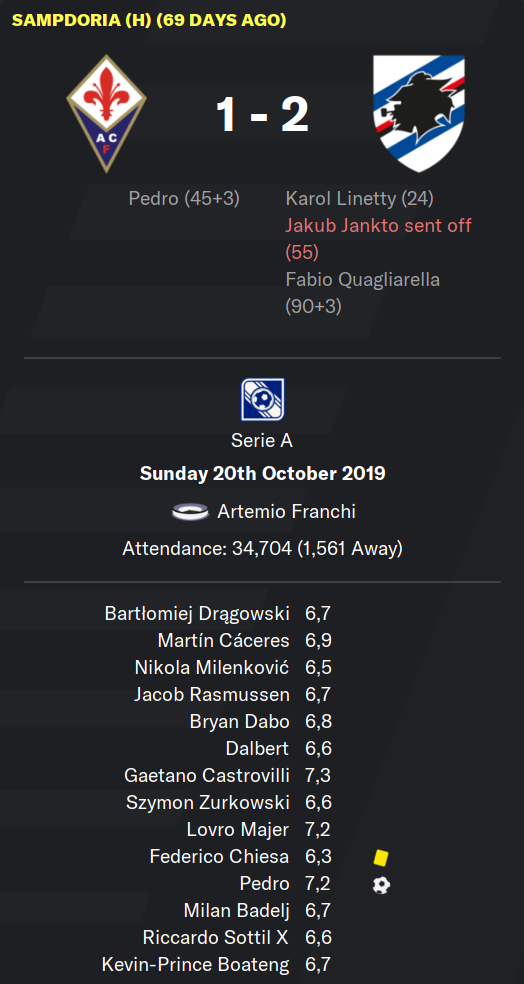 Another draw against Inter away, where we got 2 goals cancelled of VAR 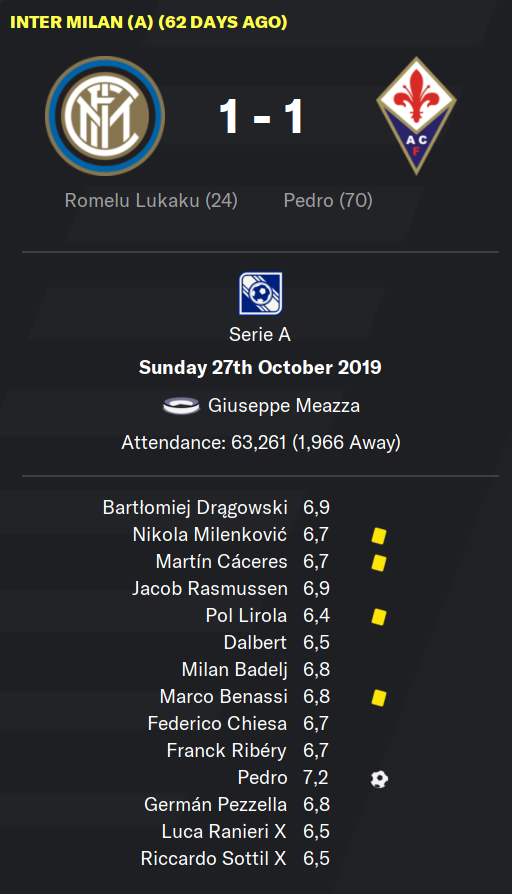 Pedro scored for 3 game in a row with lead to big win against the champions. 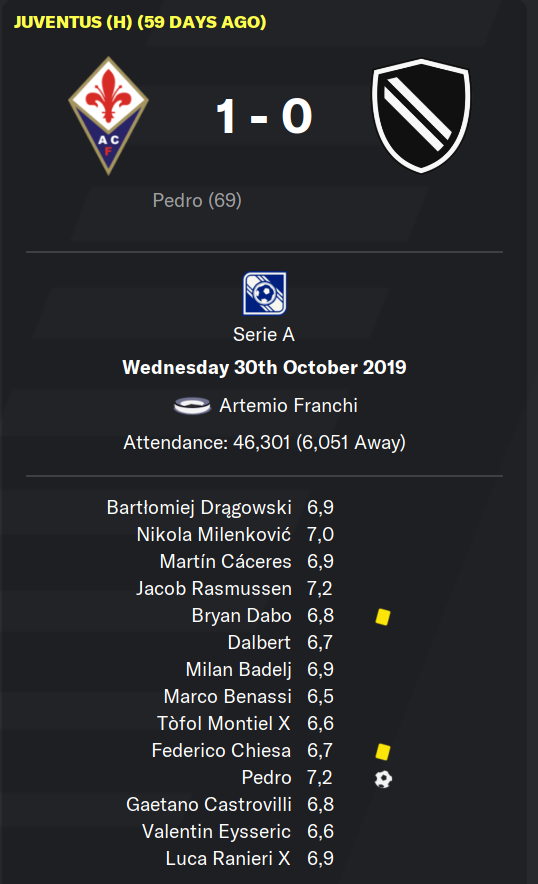 Lot of players where tired, so many key players was not in this game. 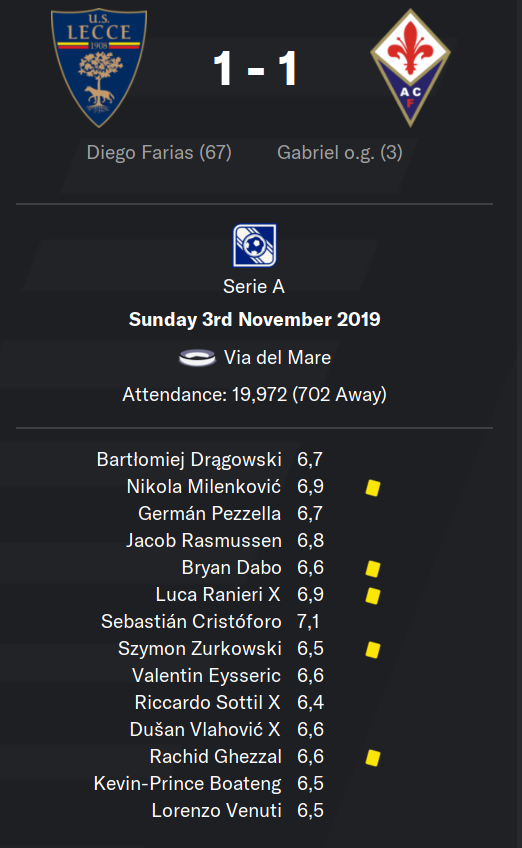 Back on the winning steak with a clean sheet 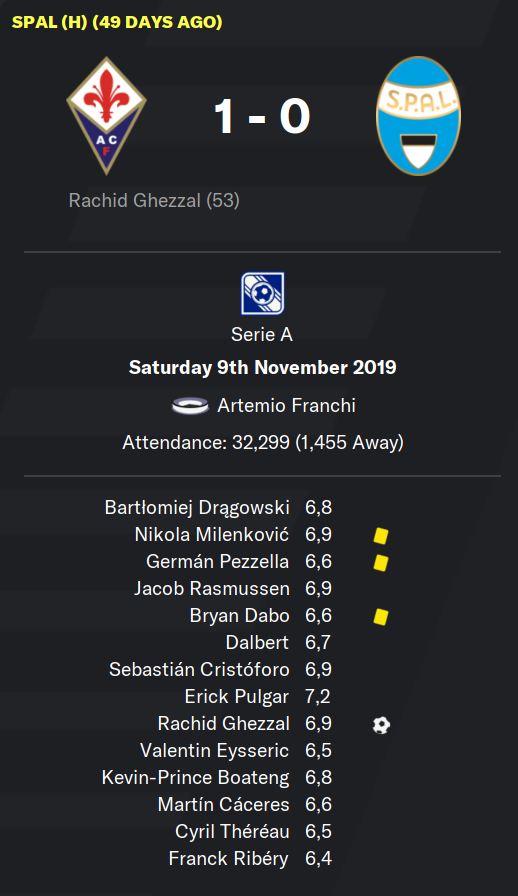 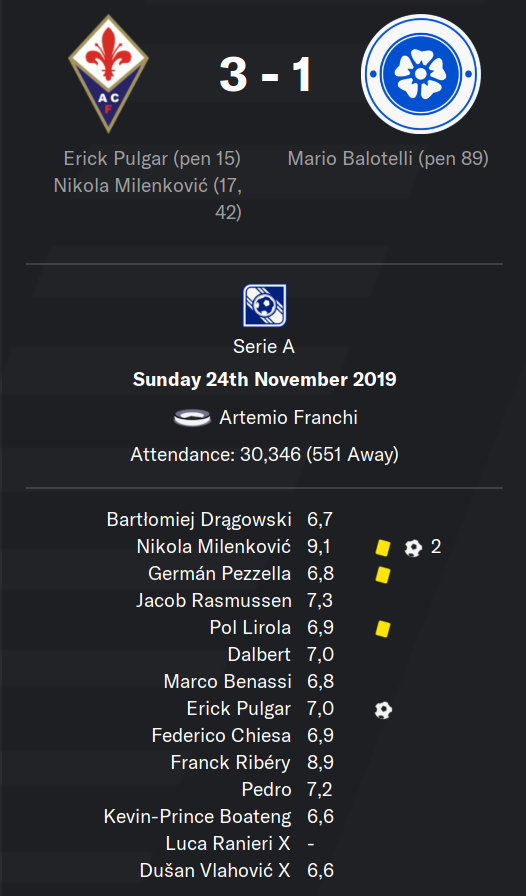 Finally Chiesa & Ribery got some goals in. 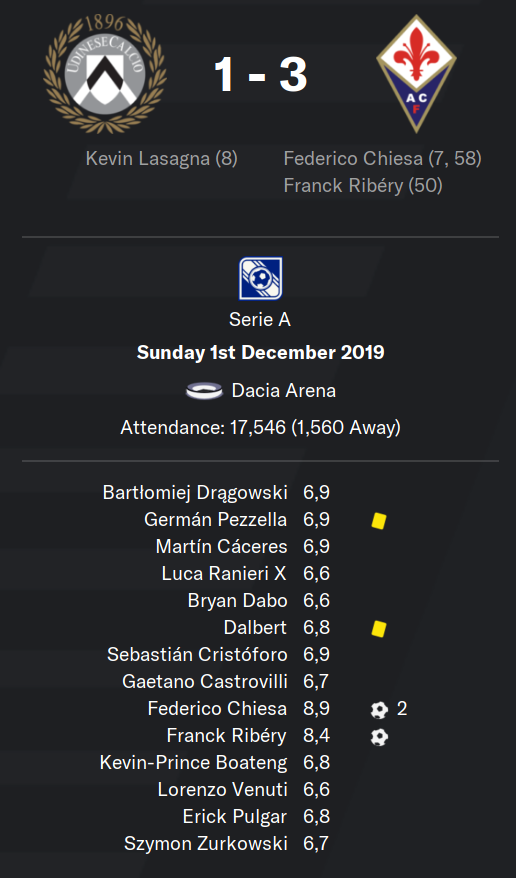 Second round of Coppa Italia away at Pisa. 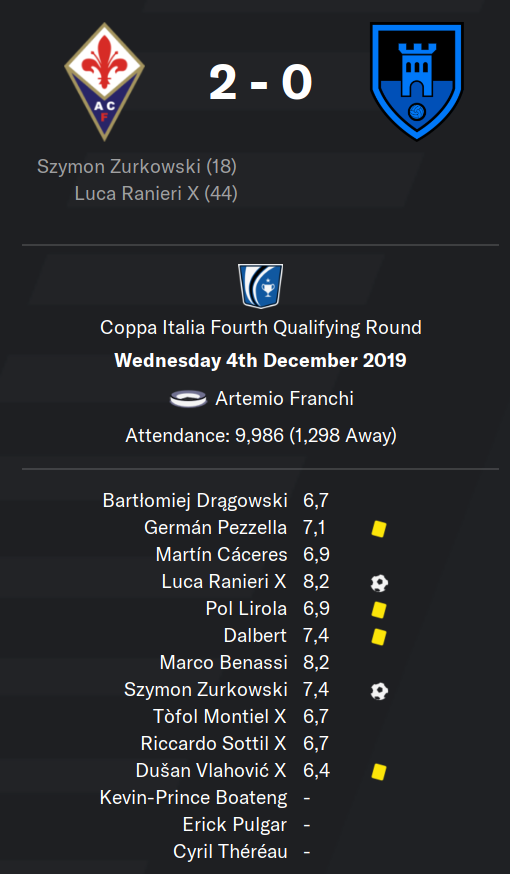 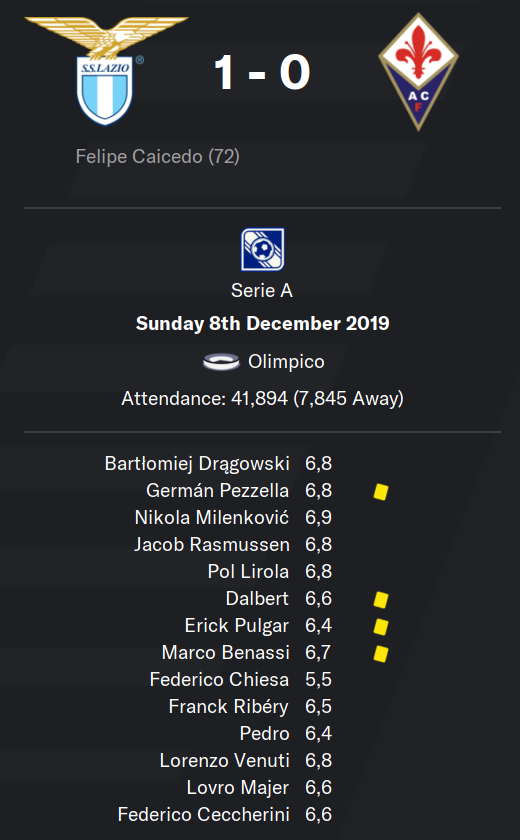 And then we lost two games in a row for the first time. 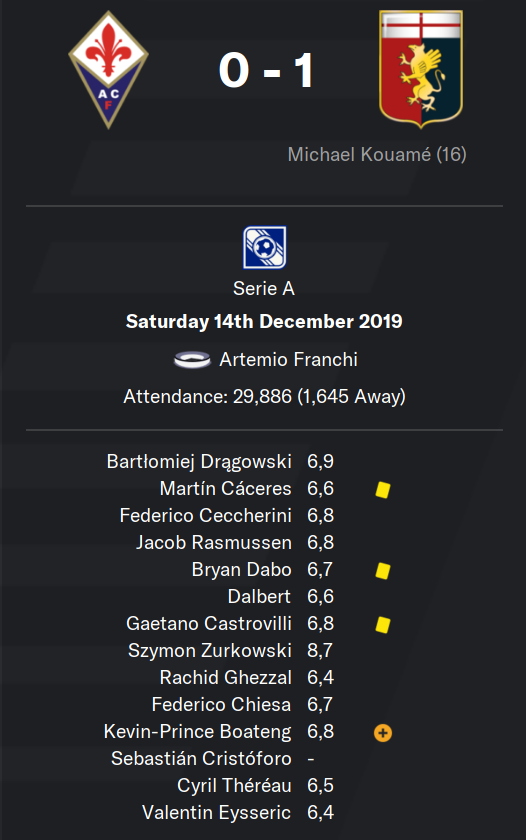 Last game before the year, down 1-0 until 82 minutes where we turned it around. 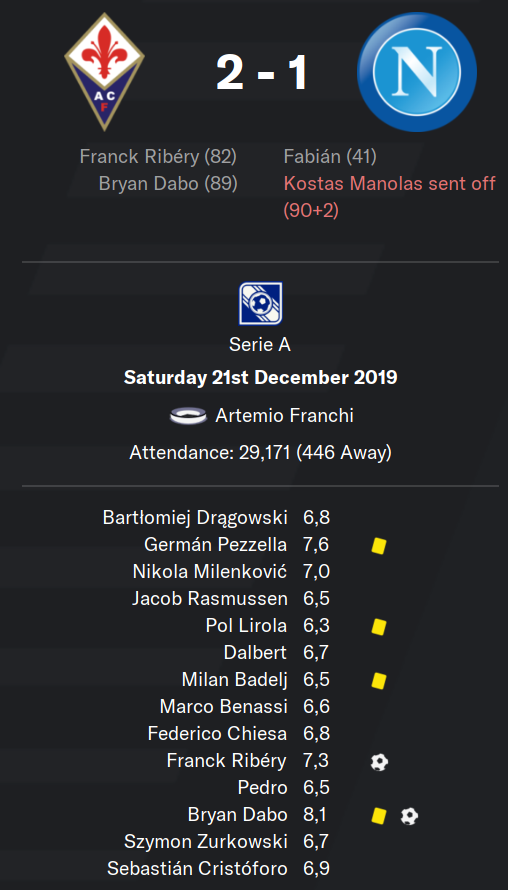 Before heading into the new year, we dumbed down the 3 place in Serie A. 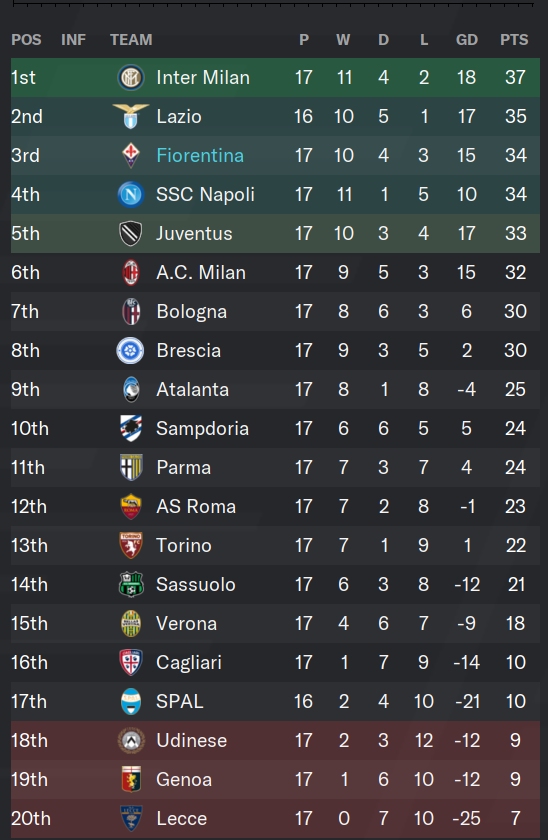 You are reading "Fiorentina - Halfway in first season #5".