Some very good signings in there... one thing I will say, Matt Dolan has an eye for the spectacular.
Login to Quote

TheLFCFan
3 years
A highly impressive window there, Simons and Stewart in particular. Going to be a massive season I think and one where you may cause a few surprises!
Login to Quote

OMGItsToddzy
3 years
I have been thrilled catching up on this, what an absolut effort winning the league and im sure you can russle some feathers in League 2, the board look willing to back you and I think great things can be achieved here

The competitive season seems to come around a lot faster than usual these days and it's already well underway for us at Torquay having played our first full month of English league football and my what a start we've had.

We were predicted by the media to finish 9th at the start of the season and so far it seems we're living up to expectations. Eagle eyed viewers will have noticed that in the last post the screenshot of fixtures included our 2-1 win over Accrington Stanley which was a fine start however me being the blind bat I am, it was meant to be included in this update but I failed to see which month it was in at the time of taking the screenshot.

So Accrington, despite your loss there's your honourable mention.

We headed to Carlisle in our second game of the season and were left feeling blue at FT. I thought we played really well in this one, dominating most of possession and registering more shots on goal but when it came down to it Carlisle were really good at finishing off the rare chances they did have.

We were no match for Oxford in the Carabao Cup. This is the first time we've played in the competition so it's a shame to crash out so early on but we played a decent game against higher opposition and I can't fault the boys.

Salford at home, much better. 2-1 the final score. It came from Kalala, an absolute screamer from the edge of the box just at a point when it was looking like the game was going to end all equal. The character we showed to pull through this one with all three was really pleasing to see given that Salford are no easy team to beat.

Potential relegation fodder Newport met the same fate as our last two victims. 2-1 on the night and it was that man again Kevin Kalala who won it all for the Gulls. 9 points from 4 games in the league is certainly something to shout about from a recently non league side.

Chesterfield are a team we played twice in our first season at Torquay and all though we beat them both times scoring 6 in 2, but this time was a completely different story. Although we out played them in every department we somehow managed to leak a whopping 4 goals at the back. It was 0-0 at half time and im not quite sure how we managed to let this one slip so badly, we dominated.

The next match was more of the same. To a point we were fantastic but somewhere a long the lines everything just fell apart. 7 goals conceded in the last two games is really not a strong structure for survival. Much to be improved again.

Third time lucky right? This was a walkover although the scoreline may not suggest it. Southend registered two shots on goal which only goes on to reiterate our defensive issues. Luckily, Whitfield was on top form and got us a much needed win in the Leasing.com trophy. 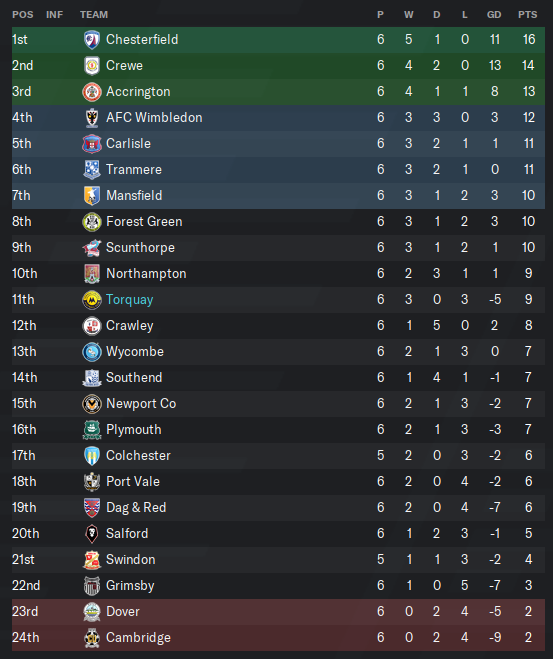 11th is a strong point to be at to begin with. We've had a lot of defensive issues which I'm not happy about but what I think is more important is that we've had bigger issues putting the ball in the back of the net before things can develop against our favour.

Stewart has made an immediate impact scoring 4 goals but his month long injury has forced Borja into the first team, as Jamie Reid is out for 4 months already.

With Borja our only striker left, it makes perfect sense for him to just jet off on u21s international duty.

So with a grand total of zero strikers available at the club, Whitfield has been filling in up top and to the best of his ability too.
Login to Quote

Jack
3 years
Certainly not good to not have kept one clean sheet this month. If you can stop the leak at the back, you can look for higher than 11th, that's for sure.
Login to Quote

Aaron
3 years
Jack: We've got no trouble scoring goals against these teams, it's that we've lost all three of our strikers for a time.

As we learn the issue at the back, I think we'll be very competitive in this league.
Login to Quote

ScottT
3 years
A decent start all things considered. Losing all of your strikers at one time though is a massive concern, especially when you're leaking goals like you have.
Login to Quote

TheLFCFan
3 years
Ouch to lose all of the strikers so early in the season isn't the greatest. But a good start to the season considering you are a newly promoted side. Need to get that defense settled and hope that your strikers can come back and turn on the performances.
Login to Quote

Aaron
3 years
Scott & LFC: The situations we're having to deal with atm have not been kind but Broja returns soon and thankfully Stewarts injury isn't that bad so fingers crossed the goals start coming soon
Login to Quote

What. A. Month. We began September in much the same fashion as we ended the last but the poor results were to end there. 3-1 to Port Vale was tough to take and it made me feel like a couple more bad results and things could spiral but as you can see we really picked ourselves up.

Crewe were already flying high and looked nailed on to beat us by the media but a fantastic defensive performance which are few and far between ensured a narrow 1-0 victory would swing in our favour taking home 3 points adding to our tally of 9.

Dover was a really bitter pill to swallow. we absolutely dominated them and being dead last in the table that much was expected. We were 2-1 up for most of the game and it was looking like a play off spot was available to us but a 92nd minute equaliser left me absolutely livid, and we'd take just the one point from a game I felt was a must win.

We finished off with two games against Crawley and Mansfield. The way we were performing there was no reason to believe we couldn't get results in both matches and I was thoroughly pleased to see we followed through on that.

Another narrow 1-0 win against Crawley was won by summer newbie Yan Dhanda but it was the Mansfield game in which the flood gates finally opened. Upon his return, Layton Stewart scored his 6th goal of the campaign having played only 8 games.

Yan Dhanda found himself back on the score sheet as two goals from wonderkid Brahimi and left back bailey Clements ensured a comforting two goal gap at the end of the game. 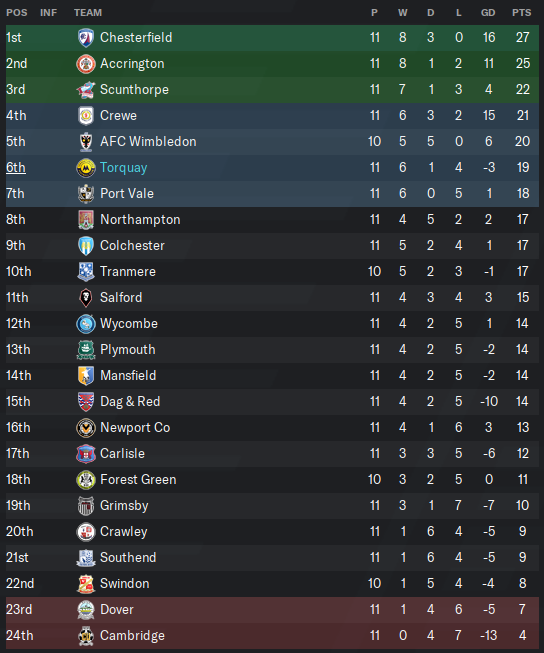 Higher than I ever expected to be at this stage in the season. We're in fantastic form but it's still very early on in the year so it won't be for at least another 2-3 months that we get a good idea of whether we'll stay up or not. I think we've got what it takes and then some.
Login to Quote

An unbelievable month!! So so much better than the last. The goals have been coming thick and fast at both ends of the pitch but Layton Stewart is a man on fire at the moment and he just will not take no for an answer coming back from a month long injury.

Half way through the game against bottom of the league Camebridge, I was trying to think of ways on how to explain a huge 4-0 battering. As the half time whistle was about to go off, Stewart nearly ripped open the back of the net with a fantastic strike at the near post. 4-1. A consolation.

But wait...Another one on 60 minutes, 4-2. Then Brahimi scores a third. 4-3. Surely it's not going to happen? It did. Captain Martin Smith to the rescue with a thunderous effort from outside the box brings it back level to a staggering 4-4. It wasn't over there though, Layton Stewart on a hattrick could smell blood and in the 86th minute...WOW

We managed to come away with three points in a game we were down 4-0. A rollercoaster of emotions I can assure you.

The results to follow in the league were something out of a dream. Only once did we drop points to Grimbsy in another game we could have easily won if the defence wasn't lacking just that little something.

Swindon, Southend, Northampton, Wimbledon. 4 scalps from 4. Another 12 points. I said it would be a few more months before we have an idea of where we'd finish but it's looking like we'll definitely survive the drop.

We were knocked off course in the leasings.com trophy by southamptons u23's. Suffice to say we played a really good game which finished 0-0 and in the end it was the lottery of penalties we fell short on. We've got one more game against Luton before we know if we'll qualify but this trophy isn't much of an importance to me so the side will probably be rotated heavily. 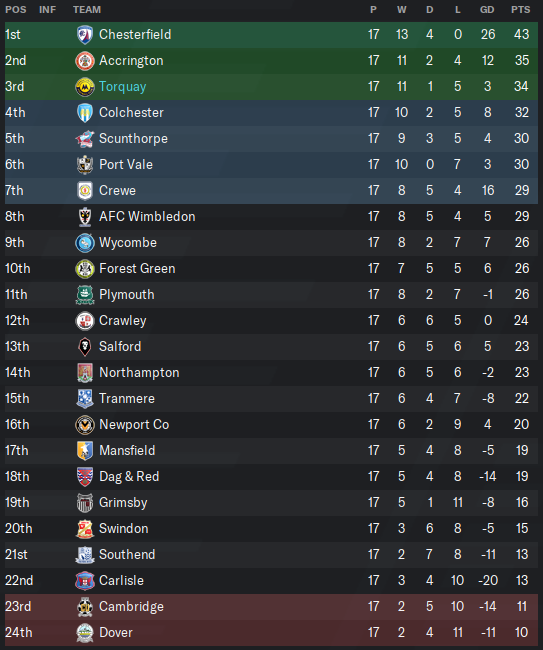 Third in the league. At the moment the only question is how high can we go this year? I think relegation is safely out of the window at this point and depending on where we are come Christmas I hope to excite myself for a promotion push.

News on the stadium expansion, it's now complete! It took 5 months to complete temporarily knocking down our total capacity but I'm happy to say we are back to normal with an extra 1600 seats.

Plainmoor is only available to be expanded to 8K so any success above the Championship will require an entirely new stadium to be built. Lots of financial investment may be needed in the coming years.
Login to Quote

Jack
3 years
That extra automatic promotion spot could really come in handy later in the season! Great news on the new seating in the ground, although I prefer safe standing myself

TheLFCFan
3 years
Stewart has been incredible so far this season, despite his month long injury. That comeback against Cambridge is remarkable and shows the character of the squad you currently have. Those playoffs, and potentially even automatic spots are looking more and more likely every month!
Login to Quote

ScottT
3 years
It's been a fantastic start to the season thus far, yet you could still make an argument that you've been unfortunate in some instances.

Imagine
3 years
Some fantastic signings in pre-season there. Stewart looks particularly impressive and Yan Dhanda is a good signing too.
Login to Quote