royman22
2 years
We didn't make too many signings, or haven't so far at least, but the ones we have made, I believe are quality additions and will bolster our squad. We haven't lost anyone so far, Celtic have been interested in Josh Gray, even offering £14 million for him, but despite me rejecting their advances, it hasn't unsettled him which shows he must want to be here.

Anyway onto our signings. 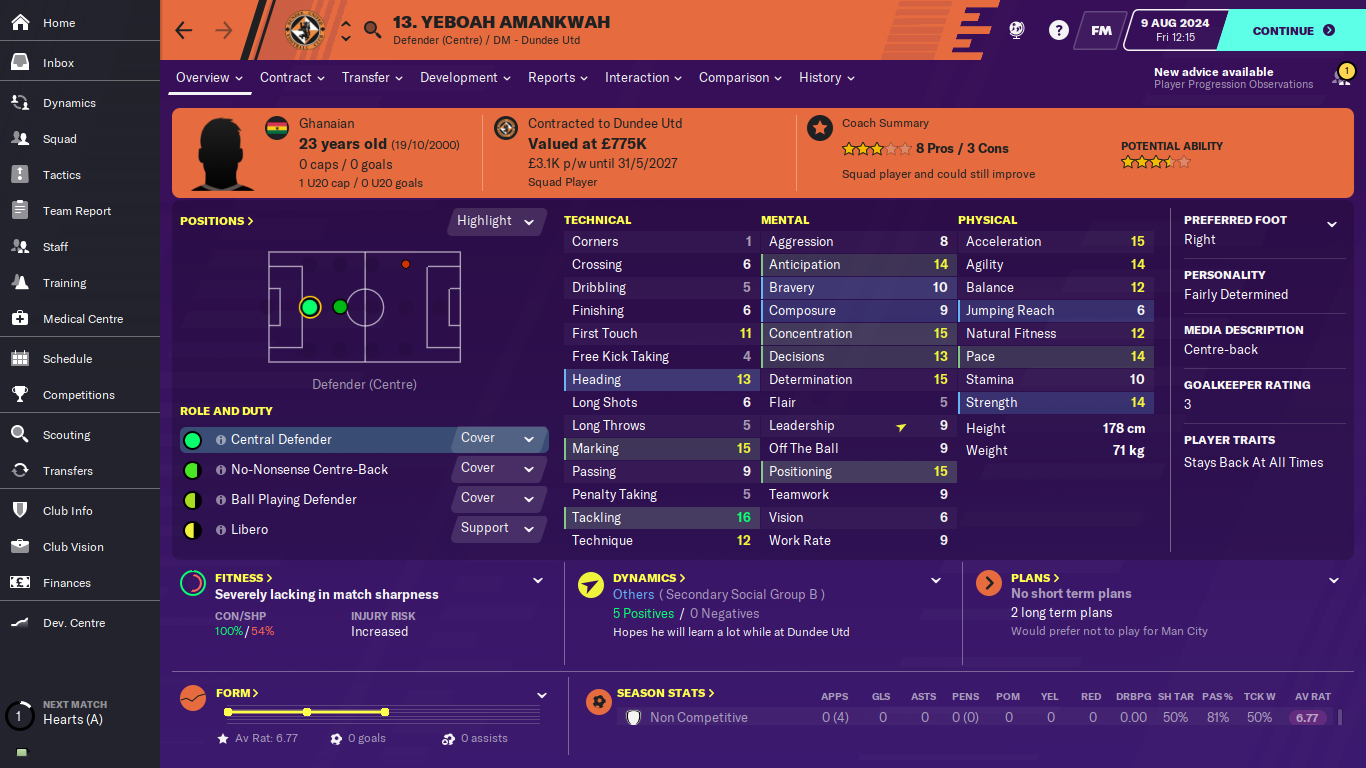 Amankwah was released from Ross County, who finished 5th. He will be a good back up option for our backline. 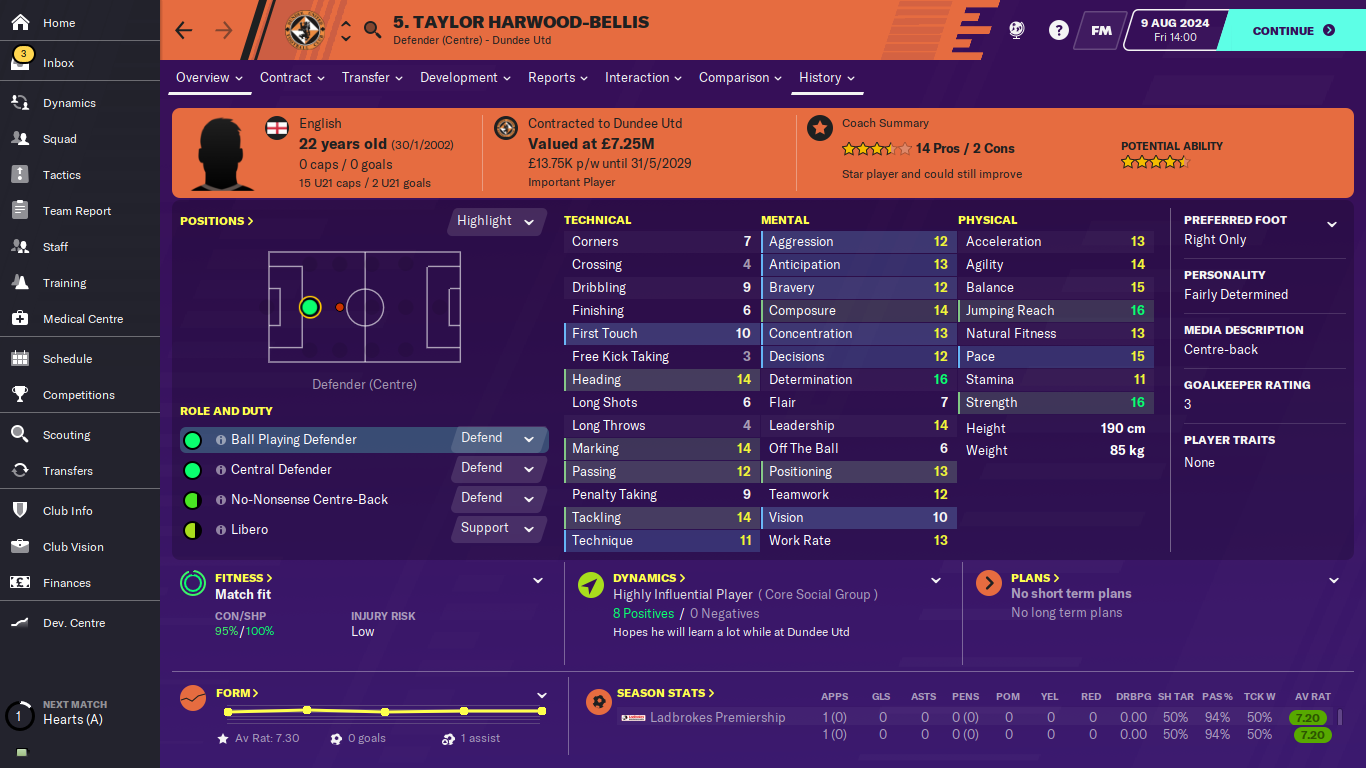 Harwood-Bellis has spent the last 4 seasons on loan with us, and with his contract at City expiring, I opted to sign him on a free transfer. Thankfully he agreed, despite interest from Rangers. 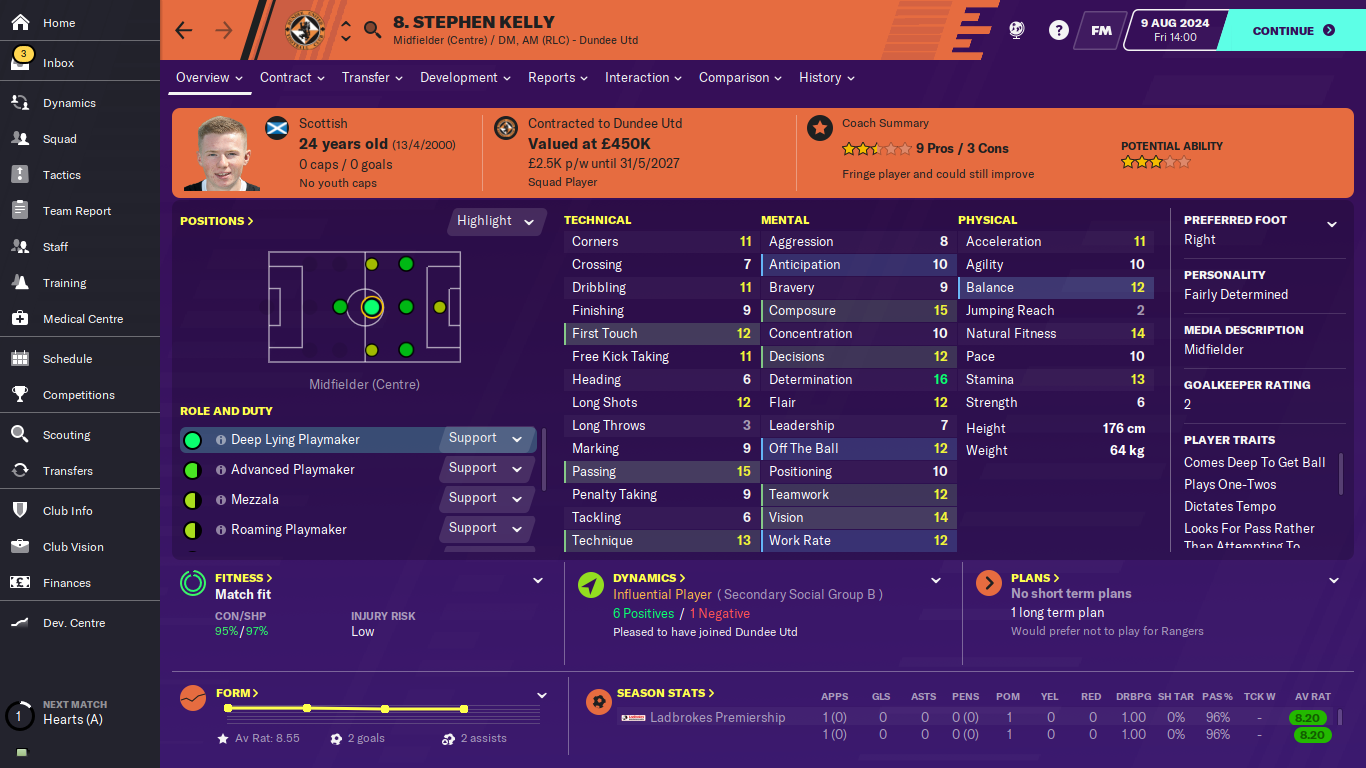 Kelly was one of the top stars for a Ross County side that shocked everyone and finished 5th. I put in a cheeky bid of £325,000 for him, expecting Ross County to tell me to pay in the region for £1 million for him. Surprisingly they accepted my initial offer for him and I was thrilled to be getting such a bargain. He will be my long term replacement for Manu Molina who is now 32 and picking up one or two more injuries 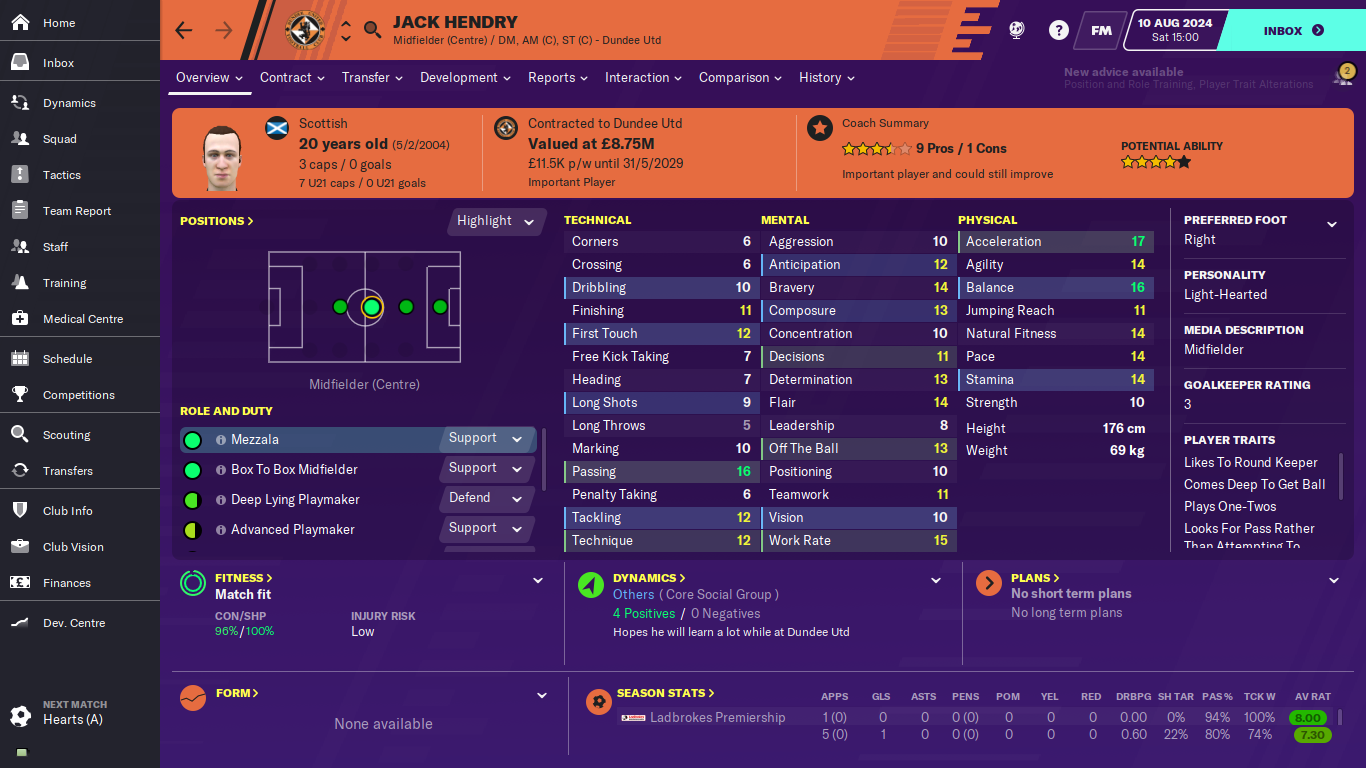 Hendry is someone who I've been after for a very long time. He's now the club's record signing, cost £9.5 million, but I think that is more than worth, as Hearts are now without one of their star midfielders, and we've bolstered ours with a quality midfielder, who will definitely be one of our first choice players.

Thank you for reading, I will be back shortly with my first month update.
Login to Quote

jahendricksi
2 years
Nice additions, Royman! At first when I saw Jack Hendry I thought "another DC and one with low quality?" But it is a regen and he looks like he could be a good addition to your midfield.
Login to Quote

Haha I know, I was a bit wary, thankfully, this Jack Hendry is a little bit better.
1
Login to Quote

royman22
2 years
Okay time to see how we did in our first month. 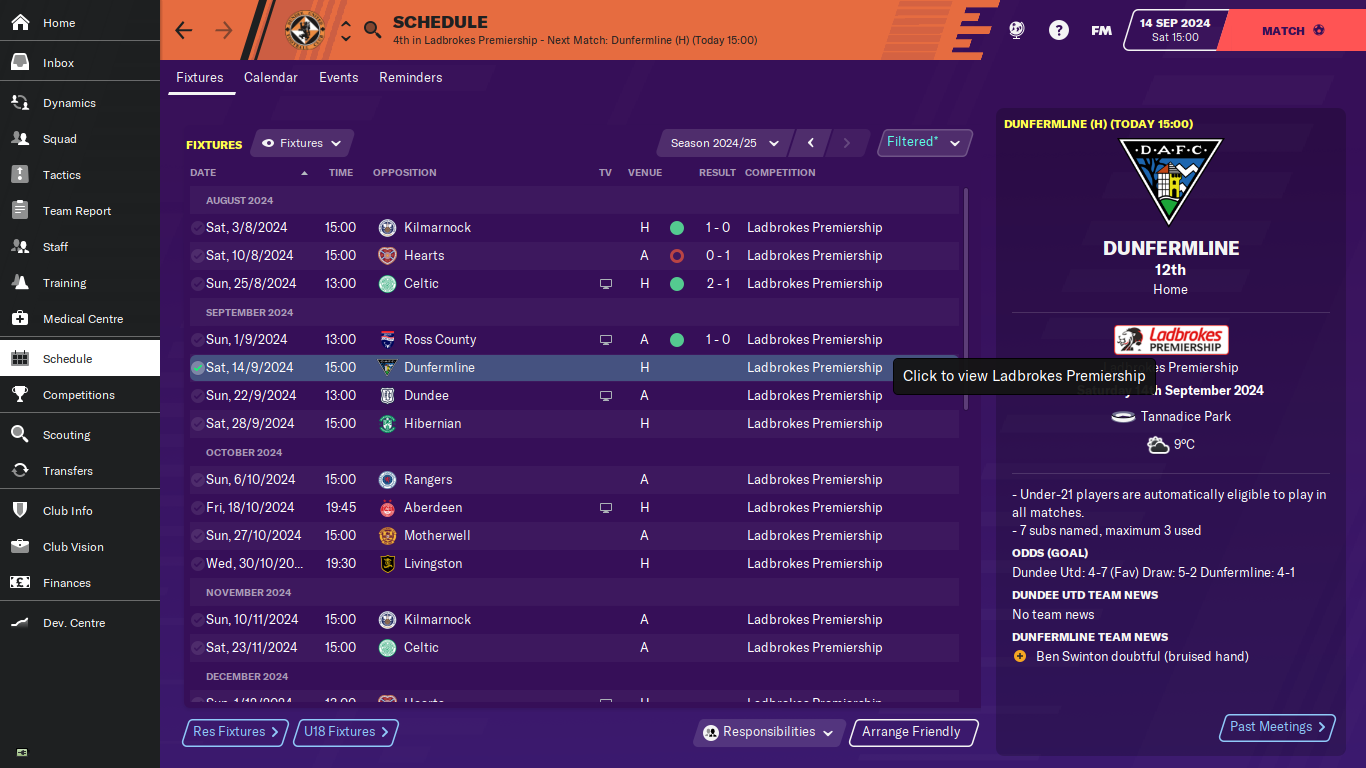 A pretty good start, we haven't set the world alight, but 3 wins out of 4, including a win over Celtic is not to be sniffed at. Typically, we're a team that gets better as the season goes on, fingers crossed it will be the same here. The win against Celtic was due to a 94th minute winner. I could not have been more pleased. 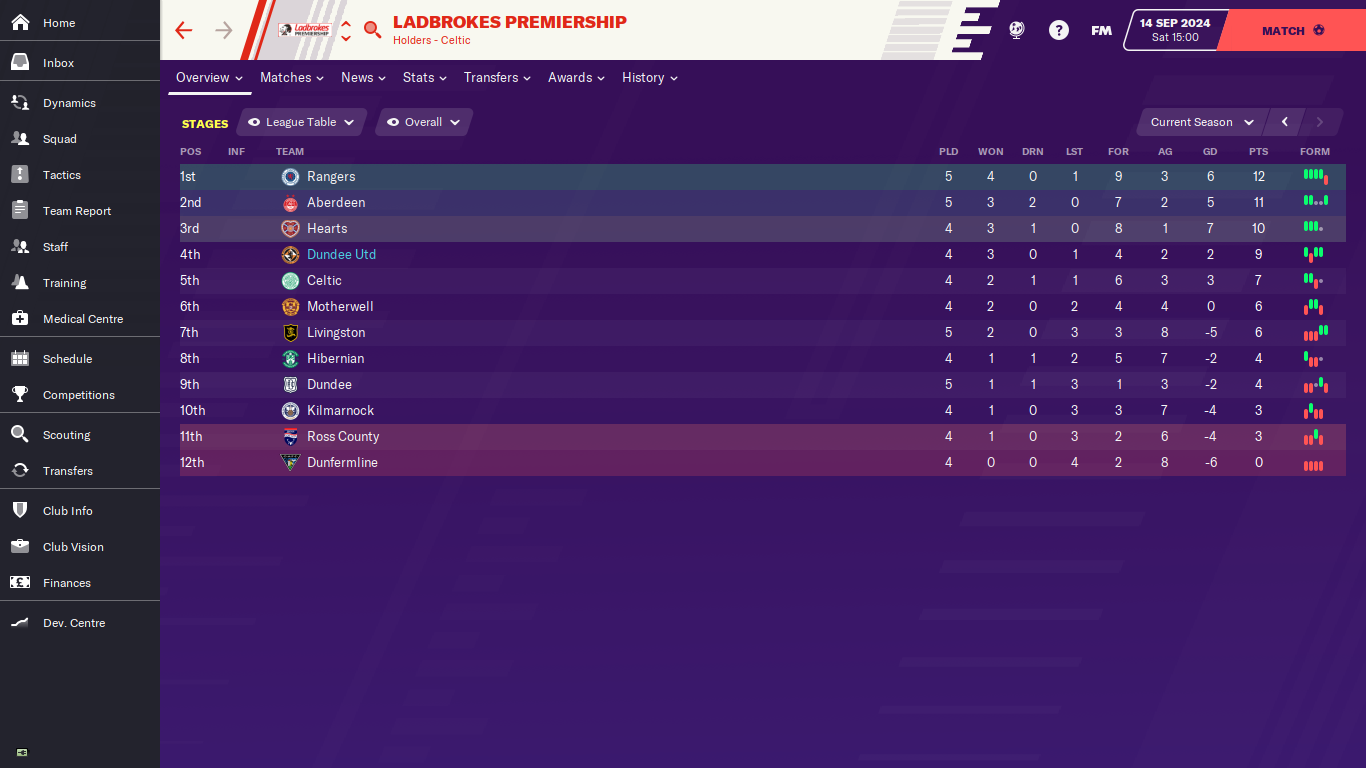 Our form sees us 4th with a game in hand over some of the teams above us. Fingers crossed we can pull off a title challenge, but I would be happy with a top 4 finish with a good run in the cups again.

We played Hearts in the 2nd round of the Betfred Cup. It came shortly after our defeat to them, so it would be brilliant to get revenge against them. 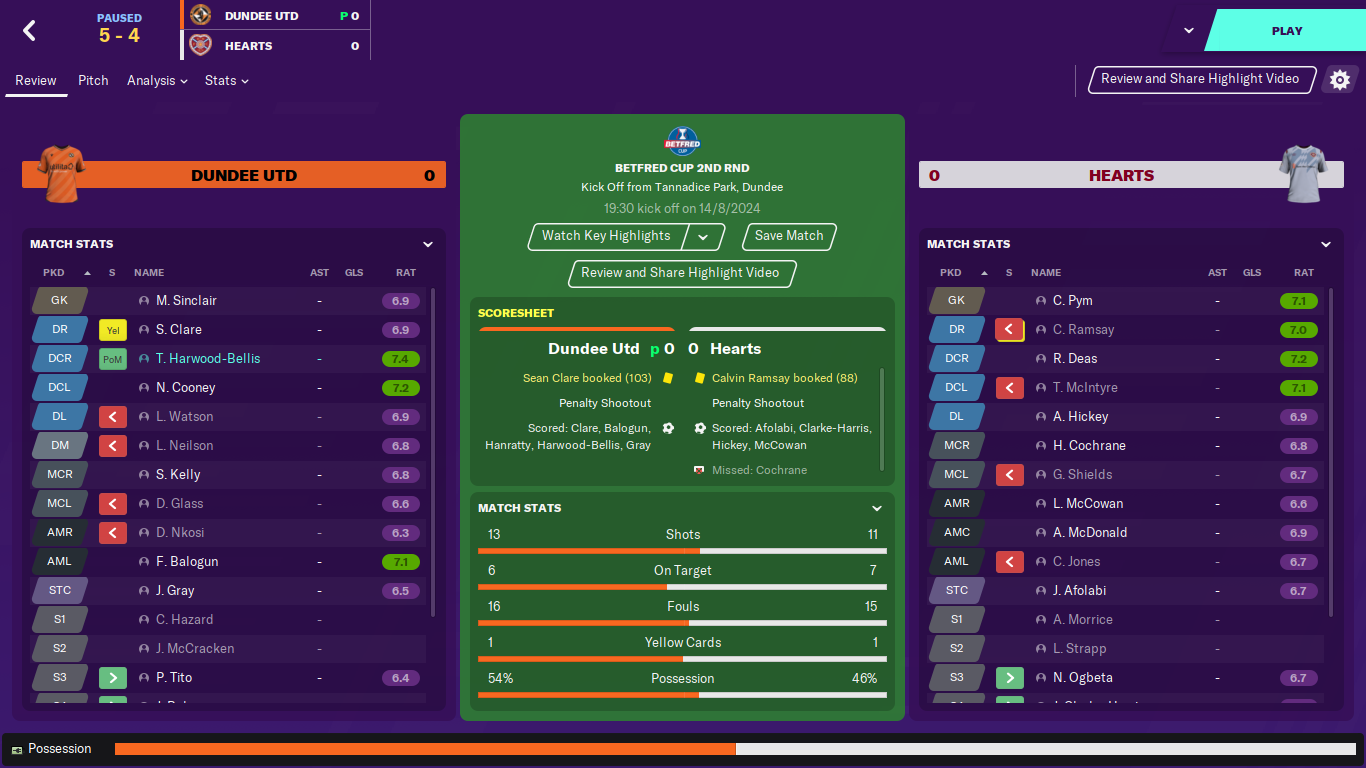 Another tough win, it was good to get a clean sheet, even better to win on penalties. Our reward is a home tie against Dunfermline, which should hopefully see another victory.

In the Europa League (proper) we had to face a qualifier against AEK Athens, who are an awkward side, not necessarily difficult, but a little bit awkward, however we pretty much finished the tie in the home leg, where we won 4-1. I played some senior players in the away leg, to ensure that were no hiccups, but we got through without any issues.

A group with Leipzig, Vitesse and Astana. A group where we could finish second, we just need to be wary of Vitesse really, obviously Leipzig are Leipzig and will probably finish top, but we faced Vitesse last season, and it'll be interesting to see if they have improved. 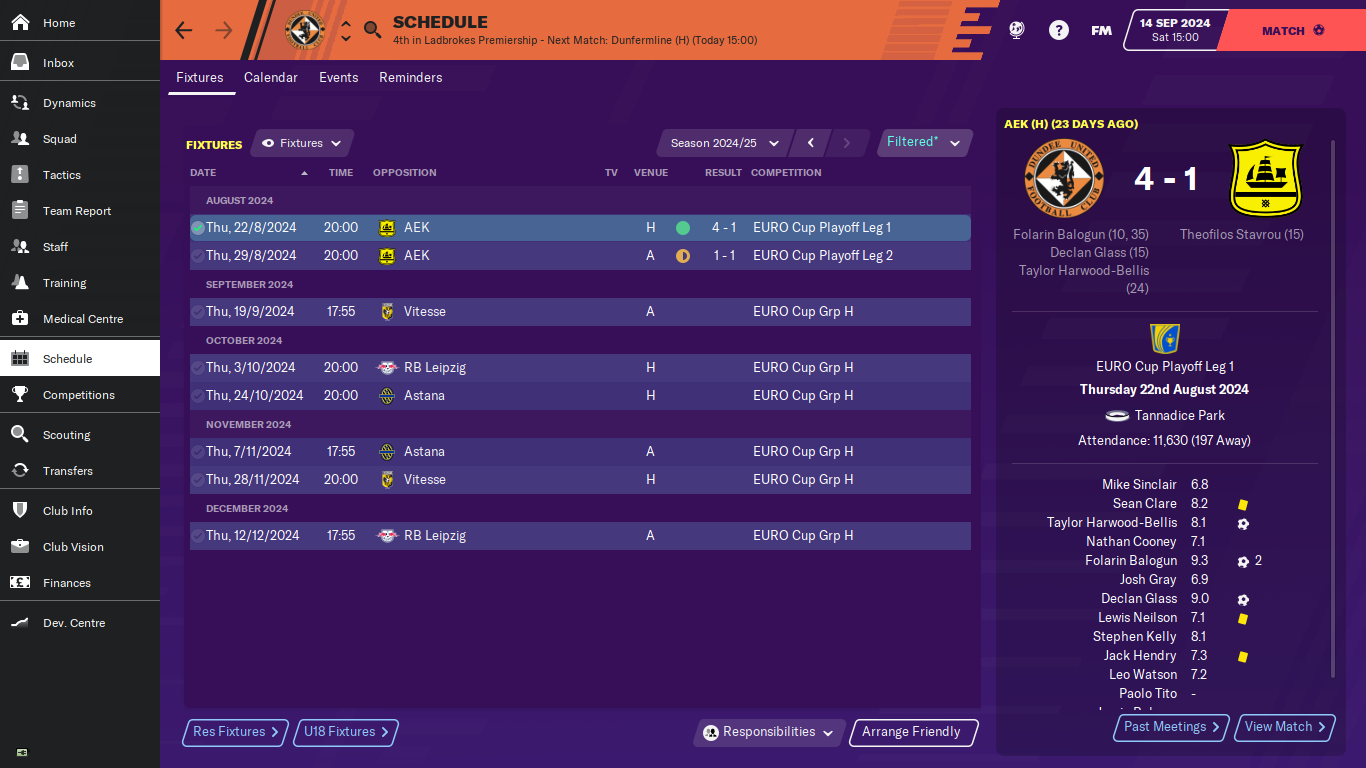 My player of the month has got to go to Sean Clare, who I have a bit of a soft spot for. I signed him to be a right winger, on a free transfer from Hearts a couple of seasons ago, but he's grown to be my first choice right back. 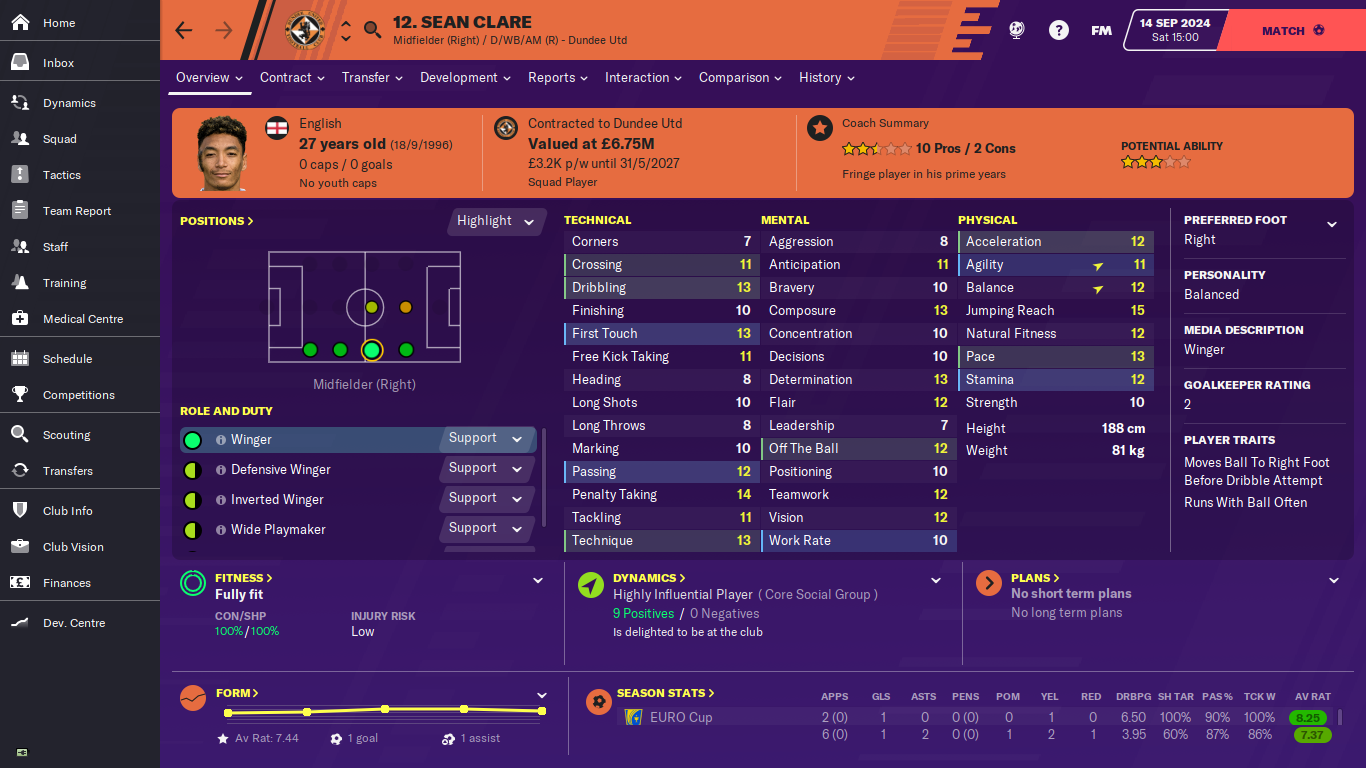 Thank you all for reading.
Login to Quote

royman22
2 years
We had a good first month, qualifying for the group stage of the Europa League, the quarter-finals of the Betfred Cup, and winning 3 of our first 4 matches in the league. Let's see if we can continue that form into September. 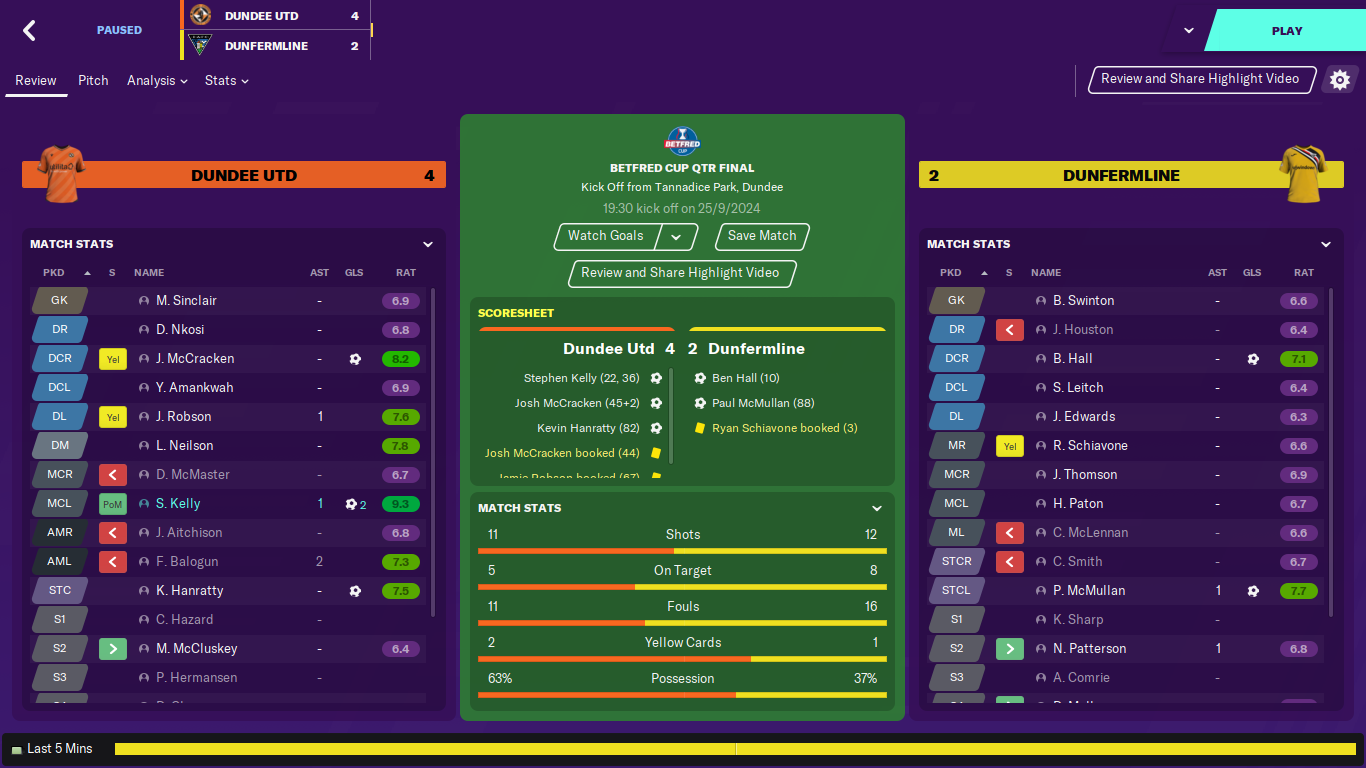 I played a few fringe players in our Betfred Cup game, but we still came through it rather comfortably, and it was good seeing us get a lot of goals, something we did quite a few times this month. Our reward is an away tie against Hibs in the semi-final.

An excellent start in the Europa League, a comfortable victory against Vitesse and a hard fought victory against Leipzig. In truth, we should have been more comfortable against Leipzig, but I made 3 substitutes after our 2nd goal, which got them into it a bit more. The reason why I made 3 substitutes? Because we had what could be a very crucial league game coming up.

As you might expect we are top of our group and look set to go through, particularly with back to back games against Astana coming up. 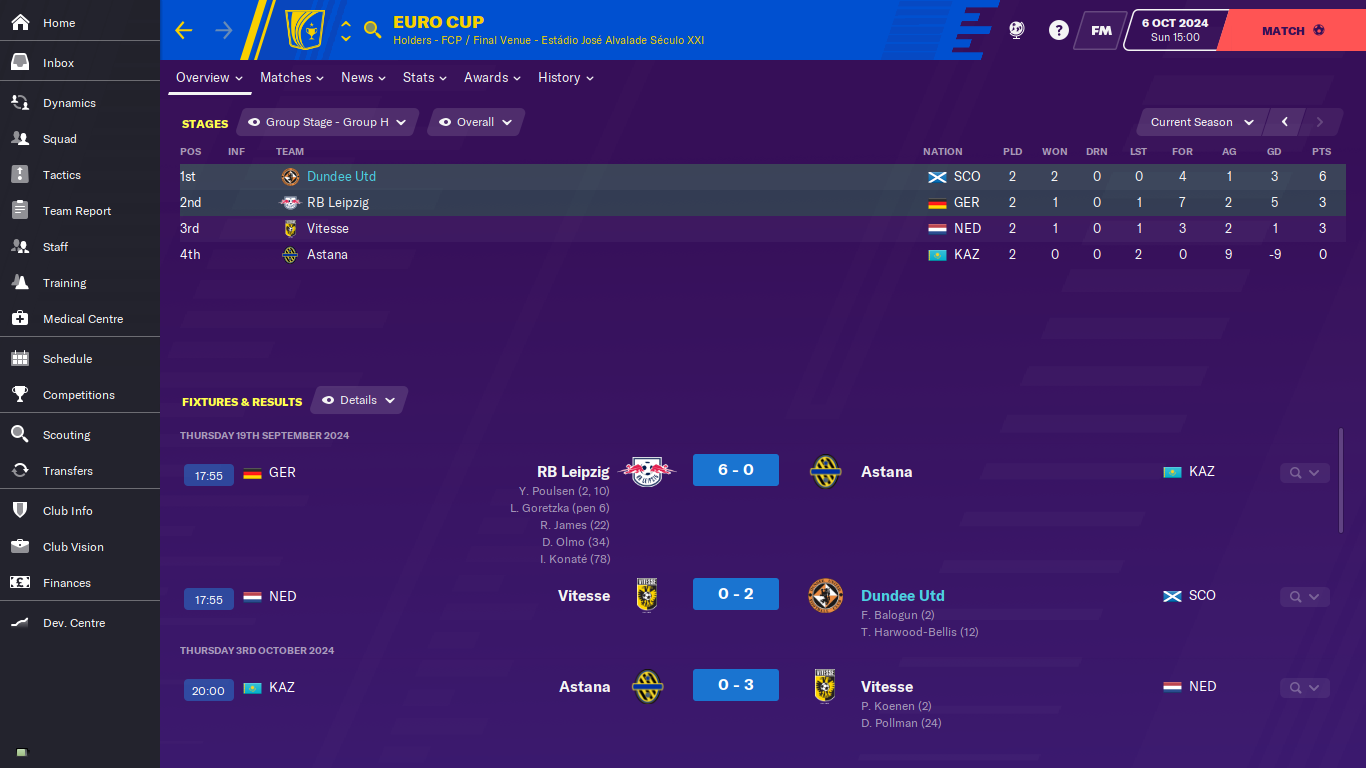 A perfect month so far. let's see if we kept up our perfect form in the league. 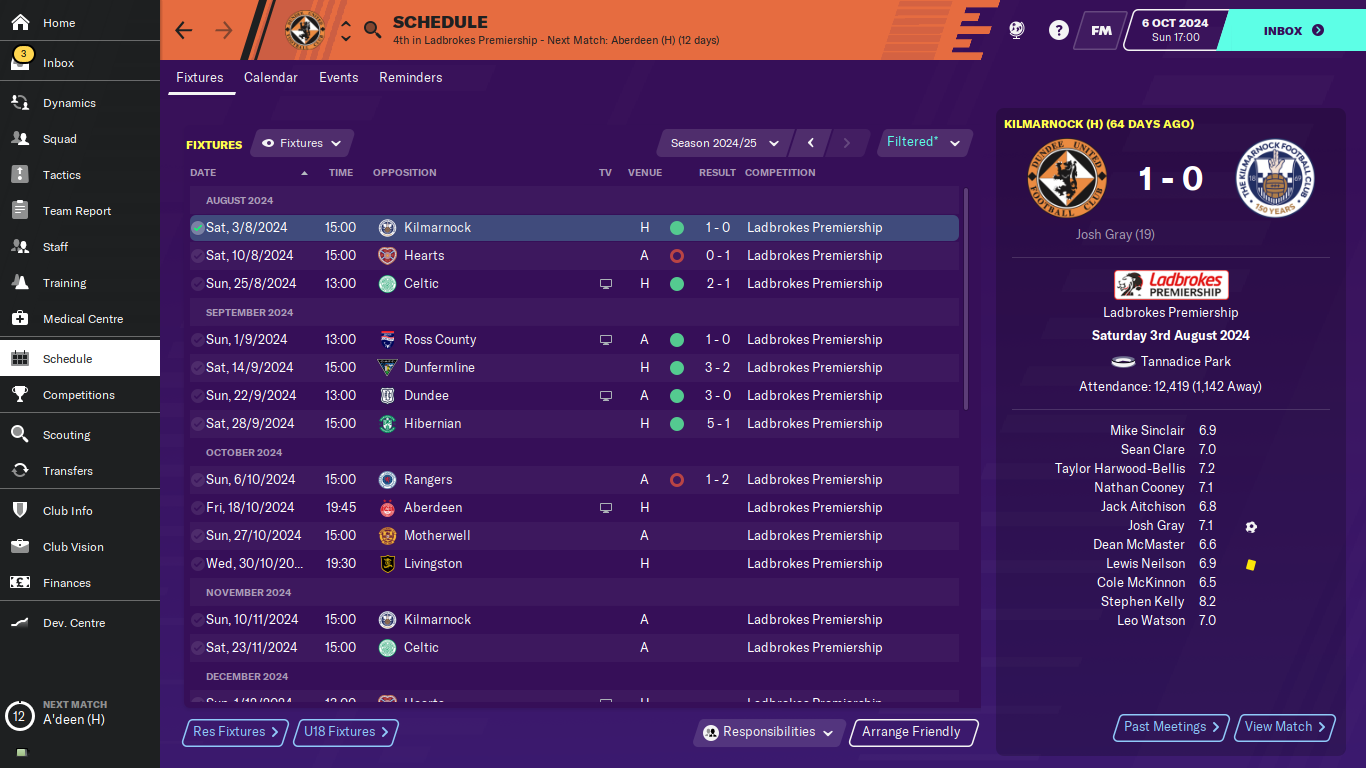 Almost, we did brilliantly on the whole. The only bad point was a tight defeat to Rangers, but coming off the big victory against Leipzig, it was understandable. A high-point as to be a sensational 5-1 victory against Hibernians, where we utterly dominant.

So let's see where that puts us in the league. 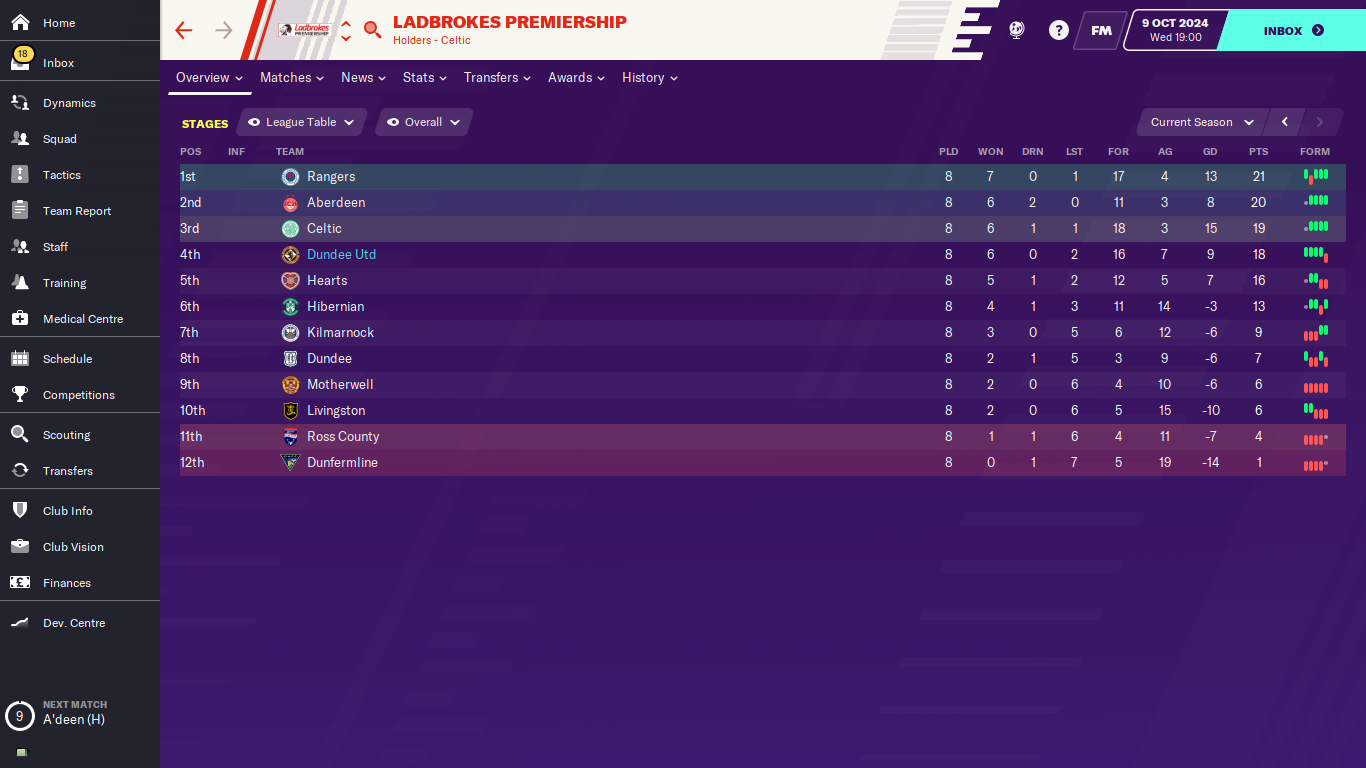 Still 4th, but it is very tight at the top, and you never know, there may be a surprise title challenge in the offing yet.

Player of the month has to go to Harwood-Bellis who has not only been ace at the back, but also going forward, scoring 4 goals. 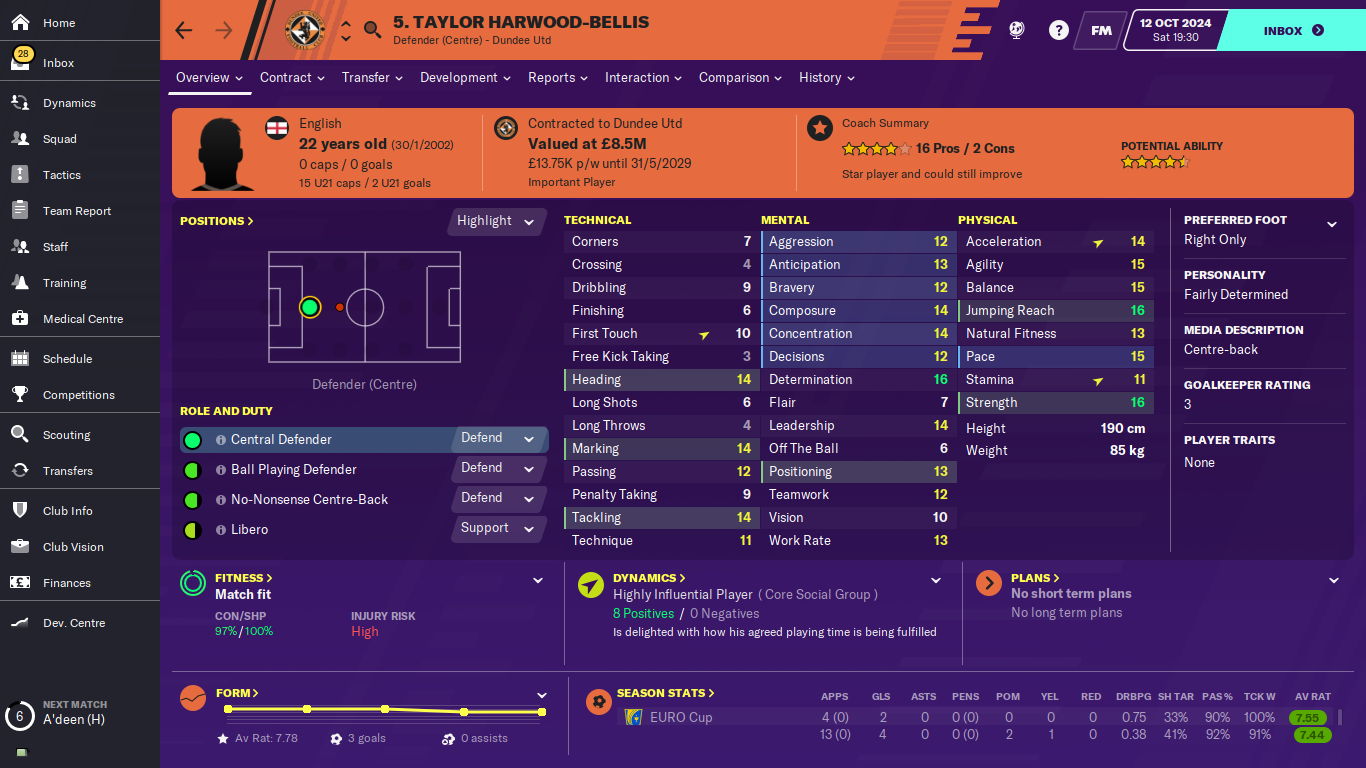 Thank you all for reading.
1
Login to Quote

ScottT
2 years
Great results across the board in particular against Leipzig. Hopefully you can clinch a victory against Hibs and look to claim yet more silverware in cup competitions.
Login to Quote

You are reading "Dundee United".