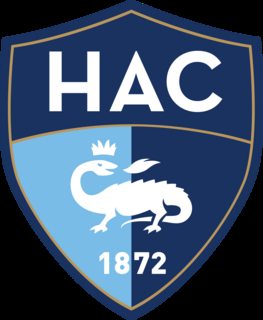 Le Havre AC are the oldest team in France but have never established themselves in Ligue 1 in over 100 years. They have produced some amount of talent over the years though through their academy in the north of France. Notable players are Benjamin Mendy, Jean-Alain Boumsong, Lassana Diarra, Riyad Mahrez, Steve Mandanda, Paul Pogba and Dimitri Payet. The club has been letting its top youths get poached by bigger clubs for too long which has cost them in their hunt for promotion. Now is the time for that to stop. Can we nurture the talent coming through and use them to get the club onto the bigger stage in France never mind Europe.

As usual with any new start we needed to evaluate the current staff at the club and some of them just didn't cut it so I went out and had a lot of conversations with perspective new members off staff and offered a few of them contracts. 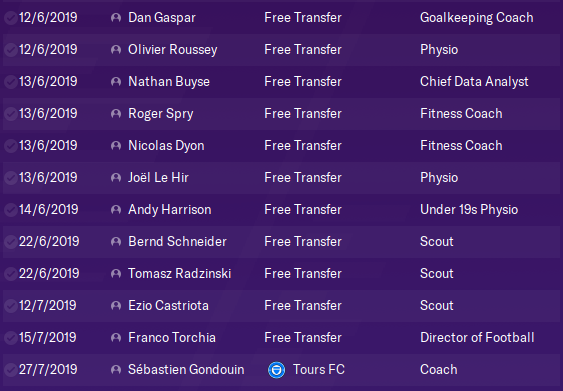 Only two players have left the club and this was so we could free up some funds for bringing players in.

WE bring in 3 players on permanent deals here with Ismael Diaz being the first in the door. The Panama international joins the club to be the starting LW

Next in is a promising young Italian winger from Atlanta and Amad Tarore who at 17 has a great future ahead of him and we managed to sign him as he was only on a youth contract at Atalanta so we were able to poach him.

Finally we managed to snatch another promising Italian on a youth contract and this tie it was Inter. Degnand Wilfried Gnonto could go onto great things and will be out back up striker this season.

We have a big preseason and I'm not sure how we managed it but we managed a big win over PSG. I don't care if it was a friendly but I'll take it.

Eoin97
2 years
A solid pre-season with some nice deals going through. Good luck for the start of the competitive season

We have a bit of a ropy month in the league as we only win 2 out of 5 games in the league this month but at least we have had a productive month in the cup with negotiating past 2 of our league counterparts to make it to the 3rd round which beats our expectations set out by the board.

The loss away to FC Lorient wasn't unexpected as they are expected to finish 2nd in the league so happy to lose to a team expected to finish a lot higher. It was even better though to bounce back with a very big win against Valenciennes where Kadewere got an excellent hat-trick with 2 of the goals coming in injury time at the end of the 2nd half.

A nice short month for us thanks to the International games and we got 2 big wins before we had our first taste of the Normad Derby against SM Caen who were relegated at the end of last season.

In the match against US Orleans Gnonto came on as a sub with 10 minutes to go and he scored in the 2nd minute of injury time to become the youngest ever scorer in Le Havre and Ligue 2 history.

In the Derby though we knew it was going to be a tough game as Caen still had Ligue 1 capable players in their squad. It was our young Italian though who managed to make the breakthrough though with a startling run off the right wing and firing home from just inside the box to get us the 3 points.

The win against Caen sent us to the top of the table. The question is though how long will we last there? 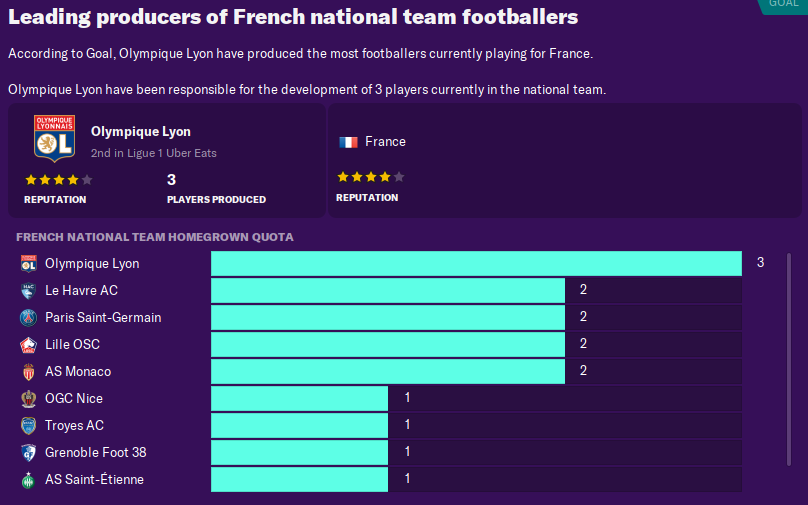 This shows just how important our academy is to French football and the future of it.

Eoin97
2 years
A terrific start to the league and already defying expectations in the cup. Great to see the influence youth has in the Le Havre philosophy, with you being joined second in the production of French internationals, with them being Paul Pogba and Ngolo Kante I presume. Great to see you already break the record of youngest ever Ligue 2 player in Gnonto! That's very exciting to see and clearly shows what direction you want to pull the club, down the youth route, as Le Havre have been doing for decades now at this stage! Keep it up

Another nice short month for us thanks to the international break. We get off to a great start with a win against Le Mans with Traore and Kadewere on the score sheet. Next we had to come from behind twice to snatch a draw all thanks to a brace from Kadewere who is far too good to be playing in Ligue 2. We then bounce back against Nancy with Kadewere with another brace and Traore netting the third.

The big game this month though was the game against Clermont Foot in the cup.

We were really made to made to work here after our defence decided to sleep through the opening 9 minutes which caused us to be 2-0 down. Luckily Kadewere got us back in the game briefly before we conceded again to be 3-1 down at half time. I went off on one at half time in the hope of inspiring the team and it worked as Ismael Diaz has the best 45 minutes of his life as he single handily won us the game from the LW. His goal in the final minute sums it all up with a thumper of a shot from 30 yards out finding the top corner

It's certainly not the best start to the month with a defeat to Ea Guingamp as we just never got going followed by a draw against Clermont Foot which we came back against them again to snatch a point.

We finally bounced back with a great win against AJ Auxerre. We had 4 separate scorers in this match which is always good and the fact we were 4-0 up at half time shows what we can do. The second half wasn't great though as we conceded twice. The next match was a lot tougher as we had to rely on extra time and penalties to see us through to the next round of the cup. We finish the month with a draw so we finish the month with 5 points out of 12 so we need to get better if we want to get promoted.

Eoin97 cheers, long may it continue.
1
Login to Quote

Eoin97
2 years
A mediocre November, but at least you were still picking up valuable points. The race at the top is tight as it can get, with only 5 points between 1st and 9th place. But if you consistently win games and come away from challenging opposition with a point, you will be in contention for sure, whether that is automatic promotion or through the play-offs. Best of luck

Another drab start to a month as well drop points away from home in a boring 0-0 draw but at lest we get a commanding win in the Coupe de France to see us progress to help meeting club expectations. We then face both teams from Paris in a week. First up is Paris FC where we grind out another dull 0-0 draw which was probably a fair result. Next up was our first real test coming up against PSG who put out a bit of a weaker team against us and they still played us off the park and were very generous at only leaving it at 3-0.

Luckily we finish the month off strongly with a big win away to Chamois Niortais and if we can play like this every week there is no reason why we can't continue to challenge for promotion at the end of this season.

Its a mixed month with 5 points picked up in the league and win in the Coupe de France to see us meet us Sable Football club which should be an easy win and see us meet expectations for the cup. 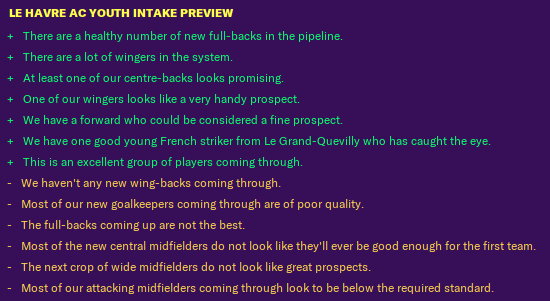 A respectble youth intake as it looks like we might have a couple of promising players coming through that might make it to the first team one day.

I was having a look around to see who was still without a club and came across Aleksandar Pantic and with us only having two permanent CB's then we snapped him up and if all else fails we'll cash in on him in the summer.

Eoin97
2 years
A very respectable January. No shame in losing out to Qatari owned powerhouses PSG in the cup. You seem to have the players playing consistently, and still sitting pretty in 2nd place. And what a brilliant youth intake!
Login to Quote

Justice
2 years
Oh Pantic, the memories of him conquering Europe in a Dynamo Dresden side for me years ago (~FM15) live forever! He shall prove to be quite the recruit for you, I hope, with his versatility invaluable.

Mixed bag of results recently but the improvement made with regards to goals conceded cannot go unnoticed. If you can keep goals out from your end and pepper the opposition end, you’ll have no problem achieving your goals.
Login to Quote

Its yet another up and down month as we have a nice confidence builder in the Coupe De France as we run out 6-1 winners with a rotated squad which see's us face PSG again in the next round. What were the odds of being drawn against them in both cups. In the league we get a very hard fought three points as we fell behind in the 9th minute and had to wait until the 81st minute before Kadwewre got the equaliser and we finally got the breakthrough in in the 90th though Abdelli.

Against PSG we pretty much lay down in the 1st half as the walked right over us with taking the lead after 3 minutes. We were 3-0 down at half time so at least the second half was a positive. With our heads down after the PSG result Ajaccio were the far better team and deserved their 2-0 victory. Finally with the finally game we got a bit more of a positive result as we managed a tough draw against FC Lorient which we were probably lucky to get a point out of it.

We let people go who were unhappy with game time as they were never going to get near the starting XI so thought we may as well cash in.

Justice yeah he's pretty solid in defence so far so long may it continue. Lets hope we stay up at the top over the next couple of months now.

Eoin97 Fingers crossed the youth intake lives up to expectations. Shame we got drawn against PSG again and lost again. I do expect this result for a while
Login to Quote

You are reading "A French Journey - Le Havre AC".