ScottT
7 months
Fantastic that. Conor has obviously installed a fearless approach into his players. They're playing against some of Europe's best and not just matching them, but outdoing them. Class.
Login to Quote

TheLFCFan
7 months
Inconsistent start to the season, smashing Lyon 6-0 but also losing to Angers for example. But it seems as though the form has really picked up, much of that due to Wright's incredible goal scoring form. To qualify from that very tough group proves Conor's ability as well as the team he has built here. Congrats to Conor for his first succesful group campaign and now let's see how far he can take this team!
Login to Quote 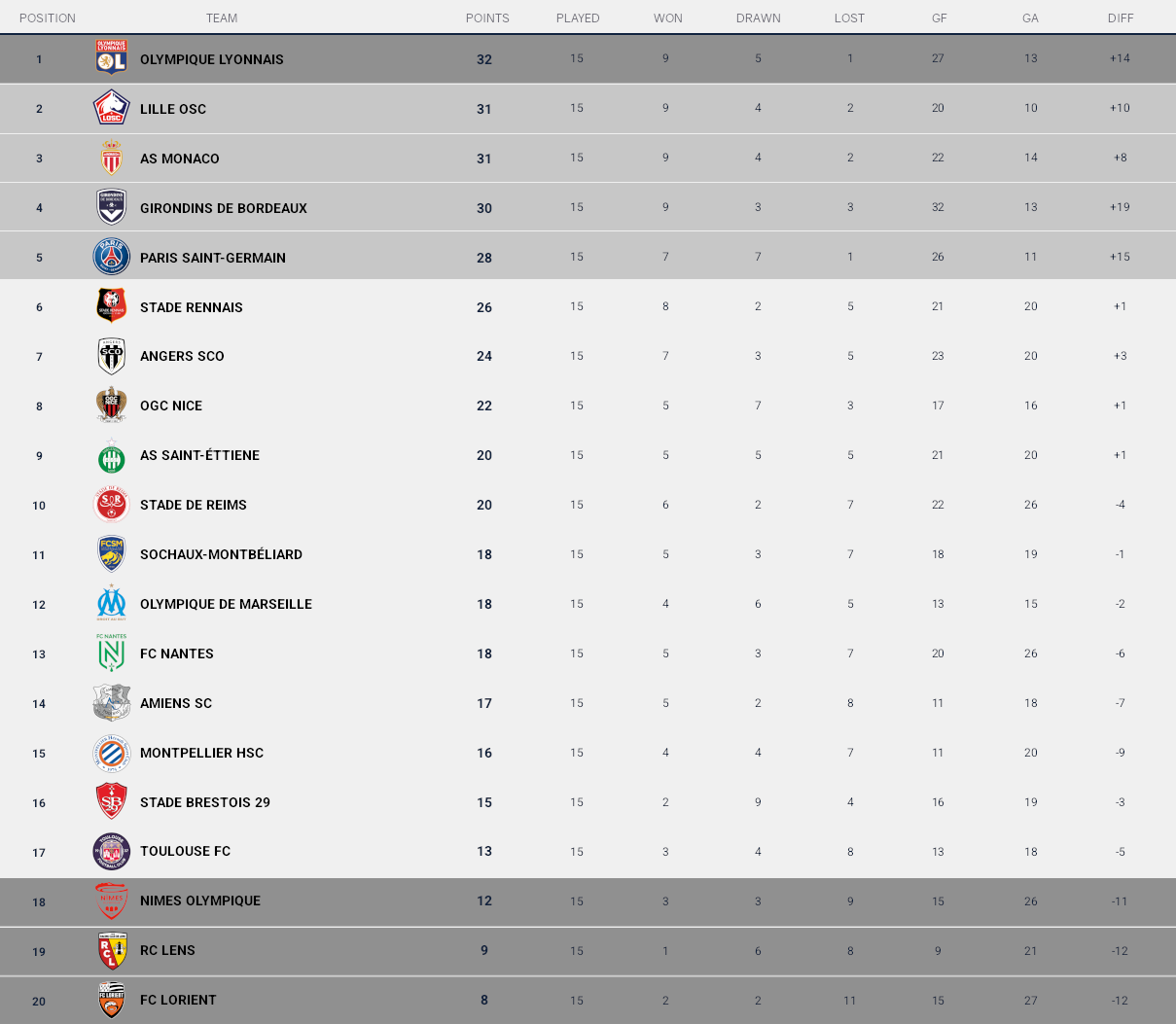 I would say that these two months were perhaps the best two months of my managerial career with nine wins out of a possible ten.

In Ligue 1 we did not face a lot of very tough teams but we had the Garonnes Derby as well as facing the reigning champions in the oil-rich Paris Saint-Germain in the capital city. We played absolutely marvellously throughout.

What I have been most impressed with more than anything is our defensive efforts. Out of the ten games we played in all competitions in October and November, Ricardo Moric kept eight clean sheets, a firm justification for the sale of former number one Axel Werner and moving the Argentinian between the sticks more permanently.

In the league, the top five are incredibly close together which suggests to me that it will not be a replica of last season where the top two stormed ahead of the rest. All of the teams are playing well with every single member of the top five also in the top seven of the form table.

Paris Saint-Germain are certainly an obvious team to keep an eye on under the new management of Rudi Garcia despite being the lowest of the top five. They have the best team in the league that will make a comeback later in the season, whether under Garcia or not.
Tango: Indeed, hopefully not for long!
Scott: As much as the inconsistency affects the league standing slightly, it's really not impacting our European performance so much. These lot know how to perform when the pressure's on.
Seb: Wright is really dragging us through the mud at the moment which is testament to his ability to perform when heavily relied upon.
Login to Quote

Tango
7 months
Finally, you managed to beat the smaller clubs. About the dominating football against the giants, no news in McDonald's saga
Login to Quote

TheLFCFan
7 months
Well PSG haven't had the brightest starts have they. Would have imagined the moment you were above them you'd be top of the league. A great two months for you and the team seem to be scoring a lot more as we go on.
Login to Quote

Bordeaux to Face the Yellow Wall 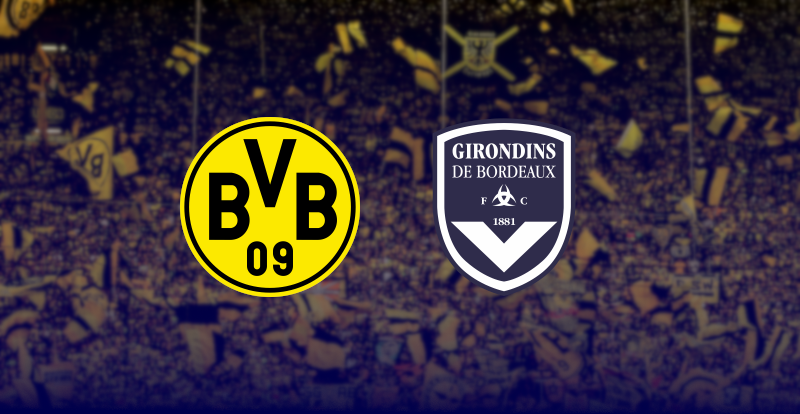 Following Bordeaux’s 2nd place finish in the Champions League Group G, they have been drawn together with Borussia Dortmund in the Round of Sixteen.

Bordeaux’s return to the European competition began in the Third Qualifying Round, beating Fenerbahce and Ajax to reach a Group Stage including Bayern Munich, Manchester City and Ajax.

With victories over the group favourites Bayern and Man City, they slipped into the next round ahead of Bayern Munich by two points despite a 4-0 collapse in their final group game to Man City at the Etihad.

Borussia Dortmund were placed in Group B alongside one of Bordeaux’s divisional rivals Paris Saint-Germain as well as Sporting Clube de Portugal and Basel.

Dortmund topped their group with 13 points on the board alongside Paris Saint-Germain who finished 2nd. A lot of thanks went to their starting striker Myron Boadu who scored 3 goals in his 6 appearances in the competition.

Domestically, Bordeaux are involved in this season’s very tight Ligue 1 title race with the likes of Paris Saint-Germain, Monaco, Lyon and Lille all staking their claim for the top spot midway through this campaign.

Similarly, Dortmund are chasing the Bundesliga league leaders RB Leipzig along with Bayer Leverkusen and Bayern Munich as they lay five points behind 1st place.

With the January transfer window splitting the next round up, fans of either side are wondering if they will see any new faces in the build-up to their clash in February.
Tango: The wins against the lower teams in the table are the most important ones after all

Seb: Indeed, a very sloppy start under new management from PSG but there is no doubt in my mind that they have enough quality to be at the top of the table for a long period.
Login to Quote

ScottT
7 months
A much improved set of results have propelled Bordeaux back to where they ought to be.

Dortmund will be tough opposition but Bordeaux have demonstrated their ability to beat the very best already.
Login to Quote

J_ames
7 months
Now that's more like it! But... bloody Nantes! Wish they'd just piss off. Just the 2 points off 1st, and progress secured in the Champions League: you're well on track. It looks like the squad has bought into what you're doing, and when that happens... it's a beautiful sight to behold! Keep up the good work man

After spending eighteen consecutive months on loan at Bordeaux, left-back Khalid Abboubi has finally put pen to paper on a permanent contract with the club.

The transfer is Bordeaux’s largest-ever single fee paid for a player since the €13,000,000 arrival of Yoann Gourcuff back in June 2009, shortly after the clubs’ title-winning season.

Abboubi only ever made two first-team appearances for his parent club while being loaned out to Lecce and Bordeaux since signing from Ligue 1 team Nimes Olympique in 2024.

Under Conor McDonald, Abboubi has been a constant starter in the team that finished 3rd last season.

He was loaned back to Bordeaux for the 2026/27 campaign and so far, he has impressed with 25 starts in all competitions, this time with 1 goal and 3 assists so far.

Conor McDonald:
“I am delighted that we have been able to make Khalid’s loan move a permanent one. He has been a great professional throughout the past eighteen months with us and a superb performer.

“With his contract signed here for the foreseeable future, it shows that both parties are very happy with the process here. I look forward to working with Khalid for the next four years.”


Khalid Abboubi wears the number 3 shirt for Bordeaux and he has signed a €100,000 per week contract until June 2031.
Tango: I'd say that there are 5/6 good teams in there, as you say though - they're rare finds.
Scott: Indeed, one of the most consistent periods coming just after possibly the most inconsistent months!
James: You've hit the nail on the head there, Nantes are absolutely our bogey team, they're never going to finish above us yet always manage to get past us. In the CL though, we're well on track

Wolf: I'm glad it's easier to follow than previously!

TheLFCFan
7 months
Excellent news on that signing! Abboubi has been a wonderful performer under Conor and I wonder if that will get even better now his long term future is confirmed. Dortmund will be tough in the next round of the Champions League, but with Conor's European record I wouldn't be surprised to see a big win!
Login to Quote

ScottT
7 months
Fantastic news. A player that has developed under the management of McDonald brilliantly. It seems only natural that Bordeaux would be keen on bringing him in permanently and breaking the club-record suggests they believe in his ability.
Login to Quote

Tango
7 months
Eighteen months on loan in a top-level club?

You're a cheap
Login to Quote