I Have not been here long but some might have seen me in chat.

Iam doing something crazy becasue well i like to do something i dont think you see much of, a proper non league to legend.

Yes i plan to take a team from the lowest league in English football and take them as far as possible without getting sacked lo.
p.s if you any good at doing images pm me. like new player arrival etc Justice
2 years
Hi mate, I notice you're struggling with coding the images to show on the forum. Click on the spoiler below for a tip on how to get it working.

You have the bbcode correct but you need to show the image's direct link rather than the link to the page the image is being hosted on (which is what you are currently showing). The direct link is distinguishable by an extension on the end of it (typically .jpg or .png) and is easily gotten by right-clicking the image and clicking on 'copy image address'. The direct link for the image you are trying to show is:


So, when you want to show the image on the forum, you enter the following:


which will result in:

Eoin97
2 years
Good luck with this mate! Be very interesting to see.
1
Login to Quote

PAFCjohn
2 years
Well pre season was ok will only draw 2 1 loss and 2 wins, but it was time to get into the season,

time is now who are am I going to pick as my first team who will be my main starting XI, My only change here is Ingram is playing in place of Fleary who is injured. 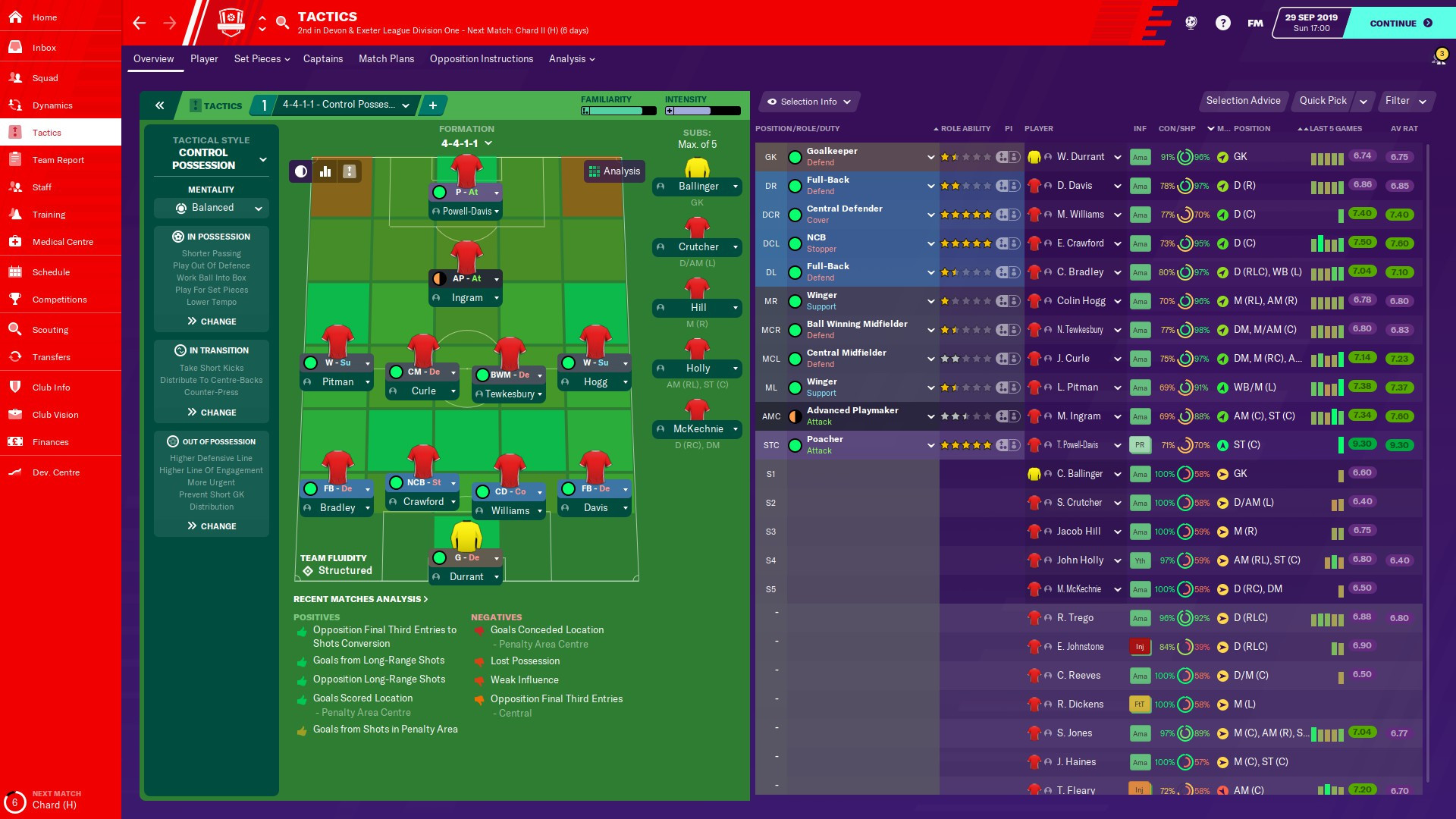 PAFCjohn
2 years
Well its here and the 1st game of the season. Away to Dawlish, a lovely seaside town on the south devon coast. its about 36 miles.

but no time to bathe in the sunshine and have a ice cream we are here to do a job. and boy did the team deliver and nice 0-2 away win for us.

weridly enough both goals scored by and assits by the same 2 players,

Jacob Curle a 19 midfielder and my corner taker whipped in 2 great corner and both where met by the captain and 19 CB Elliot Crawford, the first was a deafly touched header just going inside the far post, and the second he hammered home a volley from 7yrds. PAFCjohn
2 years
it was pretty even really. we just took our chances better.

which brings me to our 2nd game of the season our first home game at burston meadow. we welcomed tipton st john. in what was a fairly even contest maybe just edging it abit.

I tried afew different things like switching wingers for afew mins to try and throw off their defence but it was not to be has the got a 79th min goal which they held onto., but thats just football and i told my team its was ok they played welled and its was just unlucky which they seems to like and agreed which me on that. 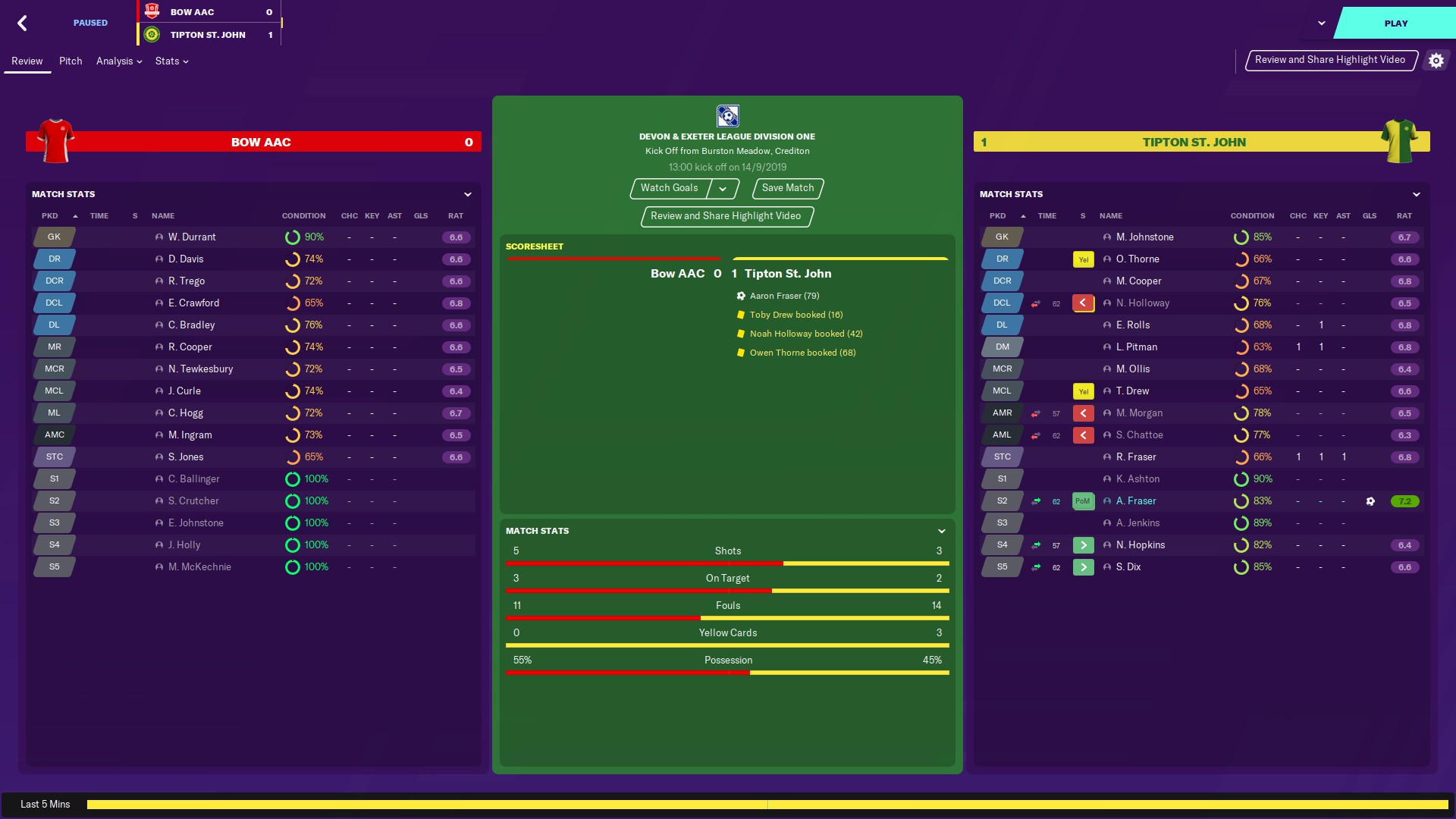 ScottT
2 years
Unlucky. Pick yourselves up and move on to the next one.
Login to Quote

PAFCjohn
2 years
3rd game of the month and another home game at Burston meadow. and just 1 chance from the last game sees Pitman come in for Hogg on the left with Hogg moving to the right to replace Cooper.

20 Mins in sees our first goal as Jones heads in from 5yrd from a Bradley cross.

ingrams first came on the 48th as bradley finds a cutting ball down the channel a couple of touches from ingram sets himself up on the edge of the box and curls 1 into the bottom corner.

we where holding on well and was thinking of making a change to sure up the back lines when we gave away a pen.

and into the final minute and all hell breaks loose first off we gave away a stupid goal a ball over the top of the left back who fouled thier player sees the ball go through to their striker, the ref allows play to go on as an advantage and they level the game 2-2, but before you can even do anything we kick off the ball played back from Jones to Crawford who plays a 1 touch pass to Trego, who just humps the ball up field, Well brought down by Ingram a touch to get the ball out from his feet and smash, 30yrds out and the ball flies into the top corner. 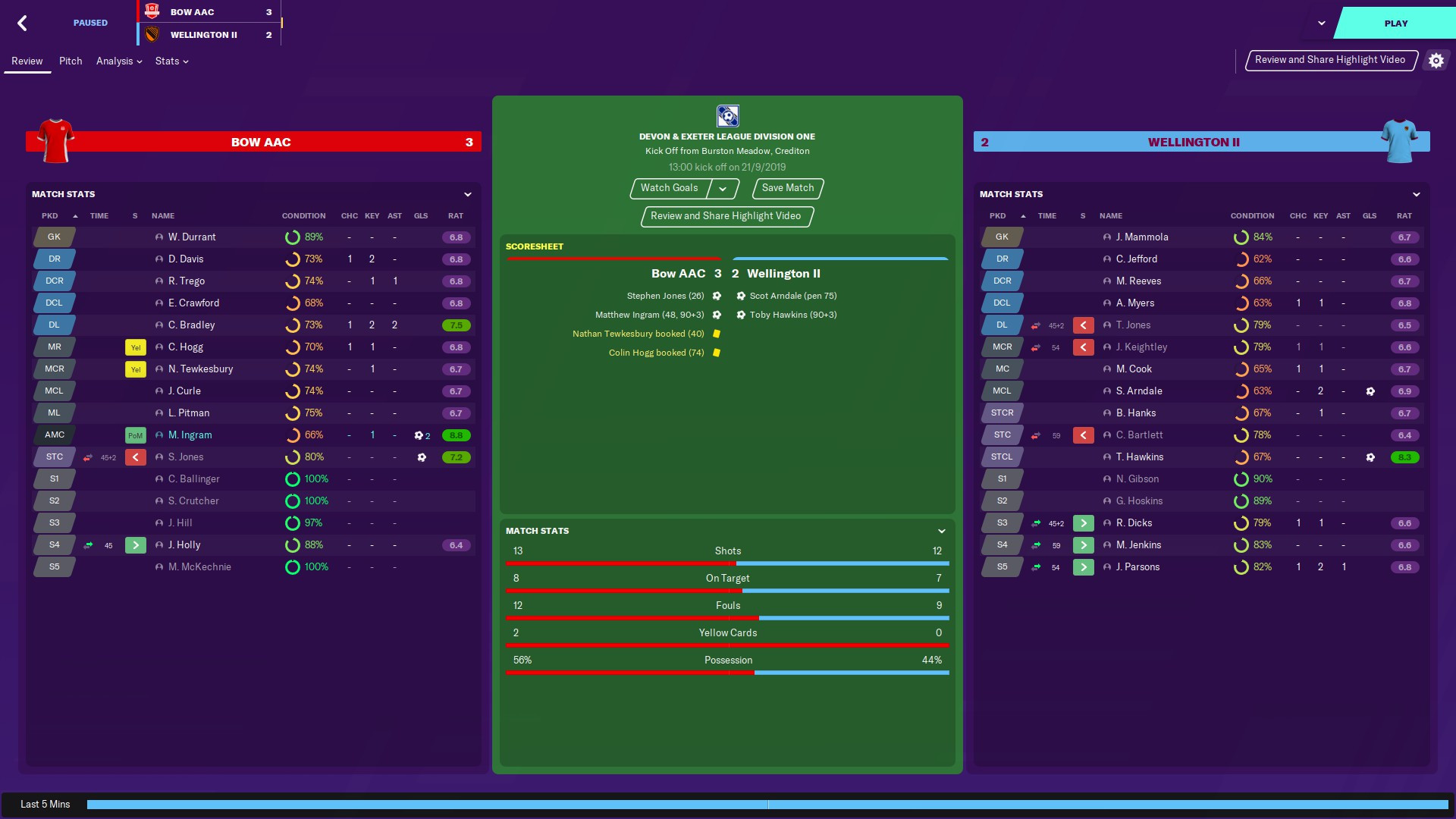 ScottT
2 years
It sounds like a typical game in the depths of Non-League football. Wouldn't have it any other way!
Login to Quote

PAFCjohn
2 years
So final game of the first month sees us play University of Exeter III. And what a way to end of the month with a 5-1 trashing. although be to fair they did have a guy sent off. but still its 3 points. 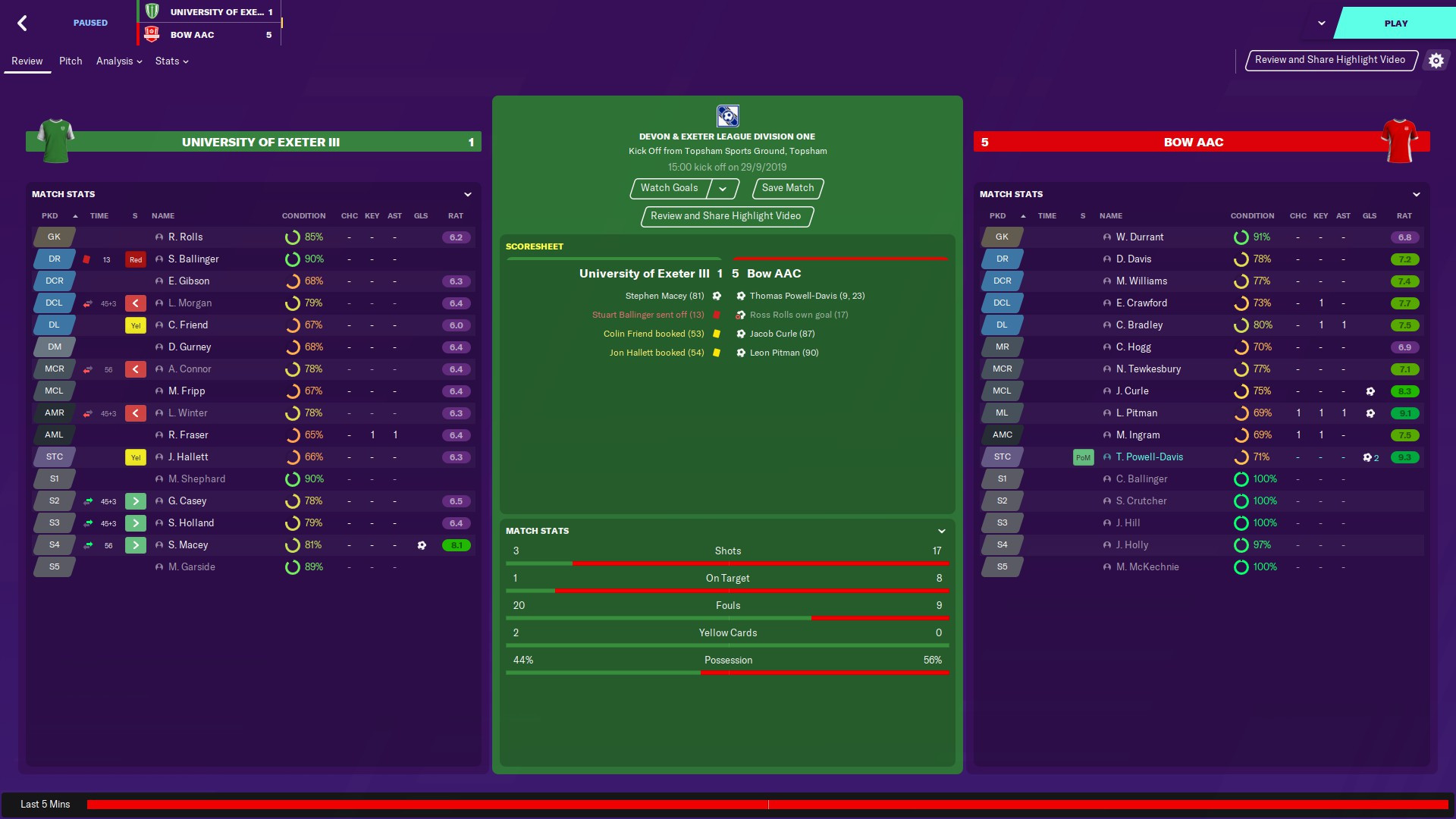 PAFCjohn
2 years
so here is the table after the first month of games. a very good start, the team are showing me that they are adapting to my style of play and are doing well in training.

but as they say anything can happen in football and there is alot of football to be played. their is still time to get some staff in and maybe afew more players to add to the depth of the sqaud but all in all a good start. 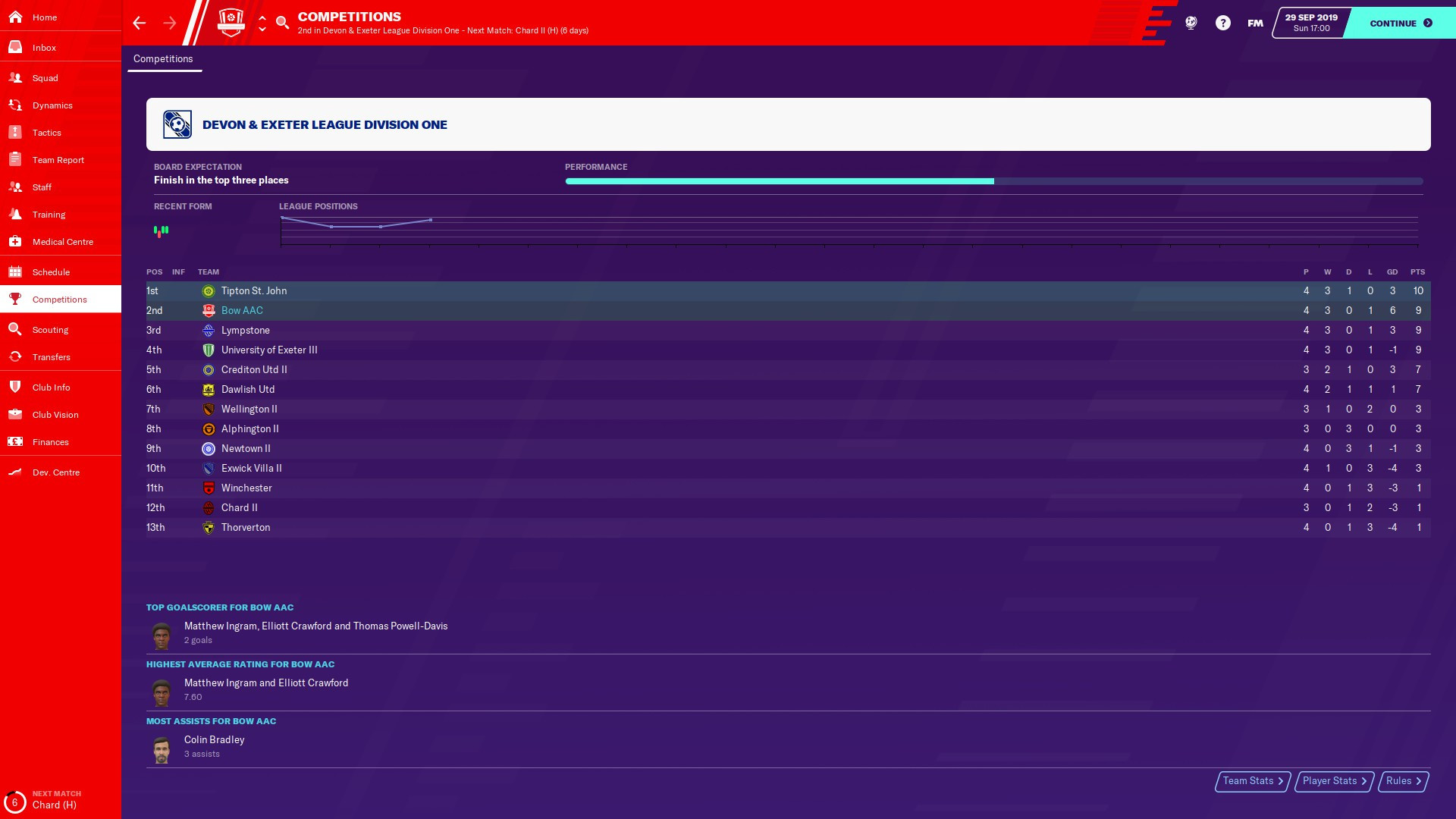 You are reading "Bow: the little village that could".