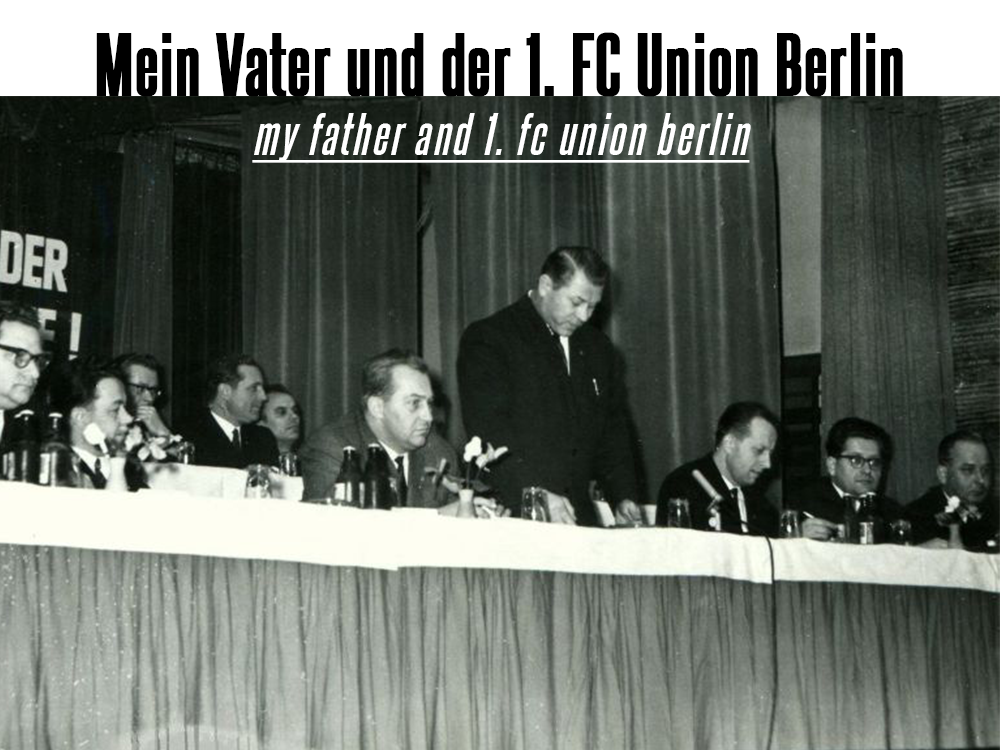 The aim of Plan Köpenick was to set up a football club in the south-eastern part of Berlin that carried the same name as the project: Köpenick. His ties to this town made him an ideal candidate to lead this project. Instead of forming a completely new club, my dad and his team decided that the football club should be a continuation of the rich footballing tradition within Köpenick. In line with these criteria, they sought out TSC Berlin.

TSC Berlin was the newest name of a club that originated in 1906: FC Olympia 06 Oberschöneweide. By 1910, this club had become SC Union 06 Oberschöneweide – a club by and for metalworkers from Berlin’s south-east. The club – which played in blue and white colours resembling the workers’ outfits – became a working-class team. During this time, the chant Eisern Union! (Iron Union) was often chanted from the terraces (remember that for later). 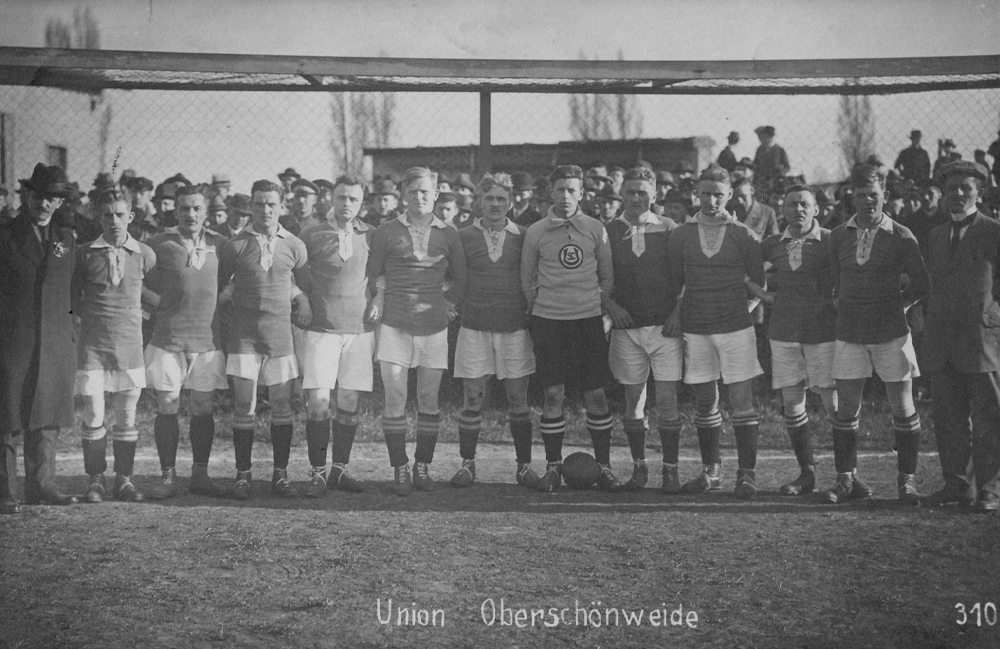 The first club from Berlin that carried the name “Union”: SC Union 06 Oberschöneweide

Union became a national force in the period between World War I and World War II, with its biggest achievement being a national final against Hamburger SV. During and after World War II, Union went through a number of reorganisations. Some forced (by the Nazi’s), some self-inflicted (by infighting and splits). To make a story that covers both East- and West Berlin, about four splits and ten club names short, in 1963 the club that once started as SC Olympia 06 Oberschöneweide had become TSC Berlin. A second-tier team just promoted from the third tier.

The project team approached TSC Berlin, telling them the club would be reorganised and sponsored by the state-controlled Free German Trade Union Federation. Fans had the opportunity to submit new names and logo’s for the club. The name 1. FC Union Berlin was eventually chosen, harkening back to the successful working-class outfit SC Union 06 Oberschöneweide. The club’s colours did however change, to red, white and yellow – the colours of the Trade Union Federation. It was official: Union were refounded as 1. FC Union Berlin, and were to participate in the 66/67 season of the second tier of East-German football.

My father – who knew that jobs were scarce in Köpenick – suggested this new team be sponsored by the association of state-owned high-voltage devices and cables. Not the most exciting sponsor, but it meant factories and jobs were coming to Köpenick after a difficult recovery from World War II. He is still proud of his work to re-establish Union, and visits every match – home or away – together with me. He also gave me the picture I added to the top of this post. “That’s me!” he exclaimed when pointing at the man third from right.

To be fair, he has every right to be proud of “his” Union: it's a unique, beautiful club. I’ll tell you more about the club he also made me fall in love with next time.

ScottT
5 months
A well-researched and produced piece of writing. I'm really enjoying the story-building in this story thus far.
Login to Quote

Jack
5 months
Great writing is becoming the norm here, fantastic introduction to the history of the team and where the club has its roots among the working class of the capital.
Login to Quote

Wolf
5 months
Really wished I could write like you mate, very nice story about the rich history of the REAL club of Berlin!
Login to Quote

Zed
5 months
ScottT: thanks! I've spent more time on research than for I do for an average essay

Tango: Stefan sure loves the club!
Jack: thanks a lot mate!
Wolf: thanks! And indeed, Union have remained way more authentic than Hertha imo!
TheLFCFan: let's see! I hope we can stay up this season, that's priority number one!
Login to Quote 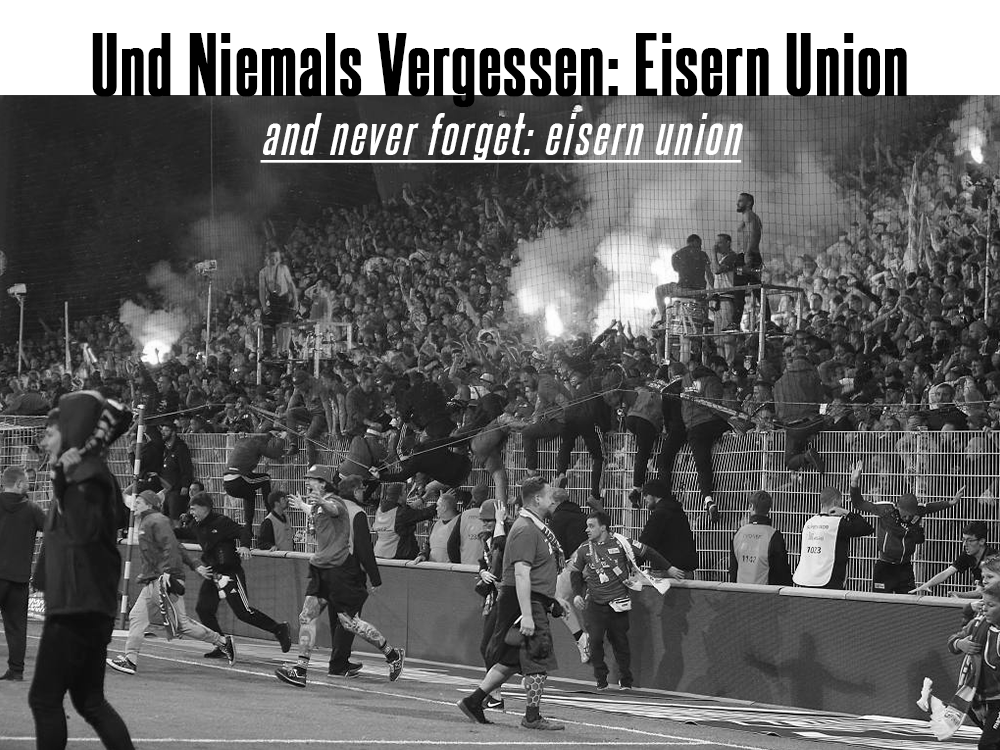 1. FC Union Berlin, founded in 1966, still exist to this day. That makes the club the longest-lived “iteration” in a series of clubs – some more successful than others – that started in 1906. Arguably, FCU is not the most successful of this series of clubs. Behind the Iron Curtain, Union were a so-called “elevator team” that seemingly promoted or relegated every season. And after German reunification, the team at one point even dropped into the regional football system of Germany.

However, thirteen years later, about two months before writing this, Union were – for the first time ever – promoted to the 1. Bundesliga after a slow but steady revival following the years of regional football. Me and my dad were there for all of it. He took me to the stadium from a very young age, and I’ve just kept going with him each time. The club is our second family, and I couldn’t imagine living without it.

As I said, Union were promoted last may, after a thrilling match against VfB Stuttgart. When the referee ended the game, people burst into tears while others embraced complete strangers. My dad and I did both. For him, Union is his life’s work, for us and many others Union is our lifeblood that helps us through difficult times. FCU is a club that has a complicated and difficult past, like many of its fans that were scarred by the World War or the Cold War. Maybe that’s what binds us; common suffering that can be forgotten for 90 minutes in a stadium full of 22.000 people who come to do the same.

The bond this club and its fans have is as strong as the iron forged by the metalworkers that founded SC Union 06 Oberschöneweide. This makes their chant of Eisern Union (Iron Union) ever-relevant. That’s why the slogan of Union is “And Never Forget: Iron Union.” These famous five words are chanted after every goal, and written at the bottom of every club e-mail or letter.

Without its fans, FCU would likely have never have experienced its revival, as Unioner saved the club from bankruptcy in 2004 and 2008 in very creative ways. In 2004, freshly-relegated Union had no money to renew its license. Fans then decided to help Union out by donating blood and giving their compensation for this to the club, literally “bleeding for Union.” A tifo in reference to this can be seen below. 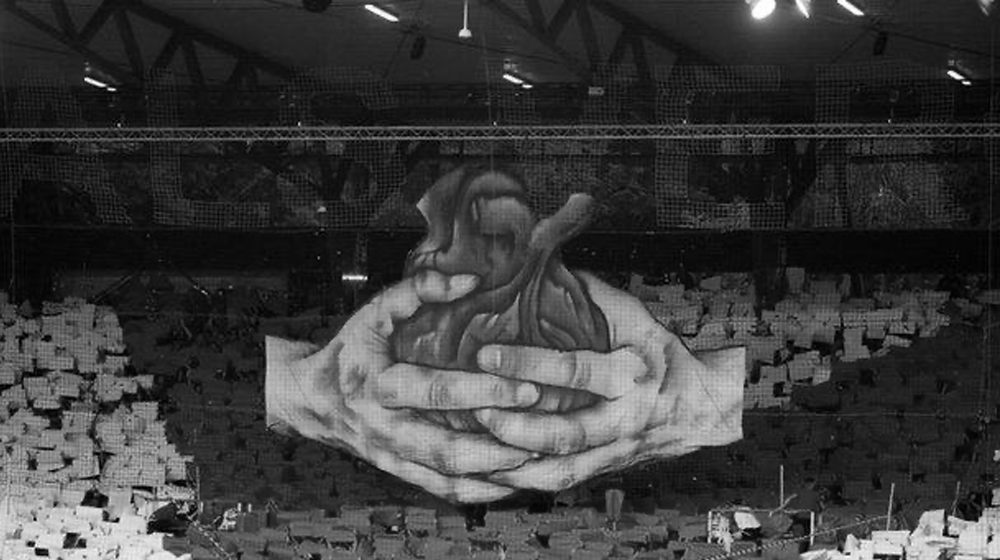 Union fans displaying a heart-shaped tifo, in reference to the “Bleeding for Union” campaign

Four years later, in 2008, the German Football League ordered Union to modernise its stadium, but money had again run dry. We feared the club would be forcibly relegated. However, 2000 fans decided to invest an estimated 140.000 working hours into renovating the stadium themselves, saving the club again. My dad and I participated in both events. We could not let our lifeblood just disappear without trying to save it. On both occasions - in 2004 and in 2008 - administration was narrowly avoided.

Union’s history, these two events, the stadium which consists almost solely of old-school terracing, and the fans who show their passion on these stands, make FCU into a very special football club that I’m very lucky and proud to be a part of. But I’m sure my dad is even prouder of the team he helped build in his very own Köpenick.

Well, that was an oversimplified history lesson about me, my family and 1. FC Union Berlin. Now, let’s look at the future. It’s July 2019 and we have about a month left until we play our first-ever Bundesliga match. No-one knows what will happen this season; our team isn’t great, but the bond between players and fans is strong. I hope that will give us an edge and we can stay up. Anyways, let’s see what happens, And Never Forget: Iron Union!

Tango
5 months
I love those clubs built by their fans, you can clearly see that there is a community around Union
Login to Quote

Jack
5 months
Beautifully encapsulates the support the club has unconditionally at all times. I think whatever Stefan manages to do in his time in charge, the fans will appreciate him just for his family background alone. If he does well, Union will be dragged back up by the Grunwald's yet again.
Login to Quote

ScottT
5 months
I can imagine it has been an emotional ride for the two of them. Their lives revolve around the football club. To them it isn't simply a hobby, it seems to be a lifestyle and an escape from everything else. It is beautiful to read the supporters pulling together in times of adversity and for them to be rewarded with a ticket to the Bundesliga is an almost fairytale ending. I hope their stay can be continued for longer than a single season.
Login to Quote

Wolf
5 months
Very nice how you make that pictures and very nice how these fans support their club, hopefully they stay out of relegation zone this year
Login to Quote

tedbro20
5 months
another amazing update. Really looking forward to see how you get on once the season kicks off
Login to Quote

OneMoreGame
5 months
Club with great history and ever greater fans!
Login to Quote

Griffo
5 months
What a lovely ... re-union
Login to Quote