TheLFCFan
7 months
A big season ahead for Union Berlin, looking forward to seeing how it goes for them in their first season at the top.
Login to Quote

Zed
7 months
Tango: there definitely is! You can really feel it when you're on the terraces there.
Jack: he's not going to be in charge, as I said in the opening. But who knows what role he'll play in the club in the future!

ScottT: I imagine it must've been like that for many people in the stadium against Stuttgart that day!
Wolf: with the support of the fans, I'm sure Union will stay afloat!
tedbro20: thanks man! We're almost getting there

OneMoreGame: couldn't agree more!
Griffo: oh god, the puns are overtaking this topic too
TheLFCFan: biggest in their history apart from the seasons where they almost went bust I think!
Login to Quote 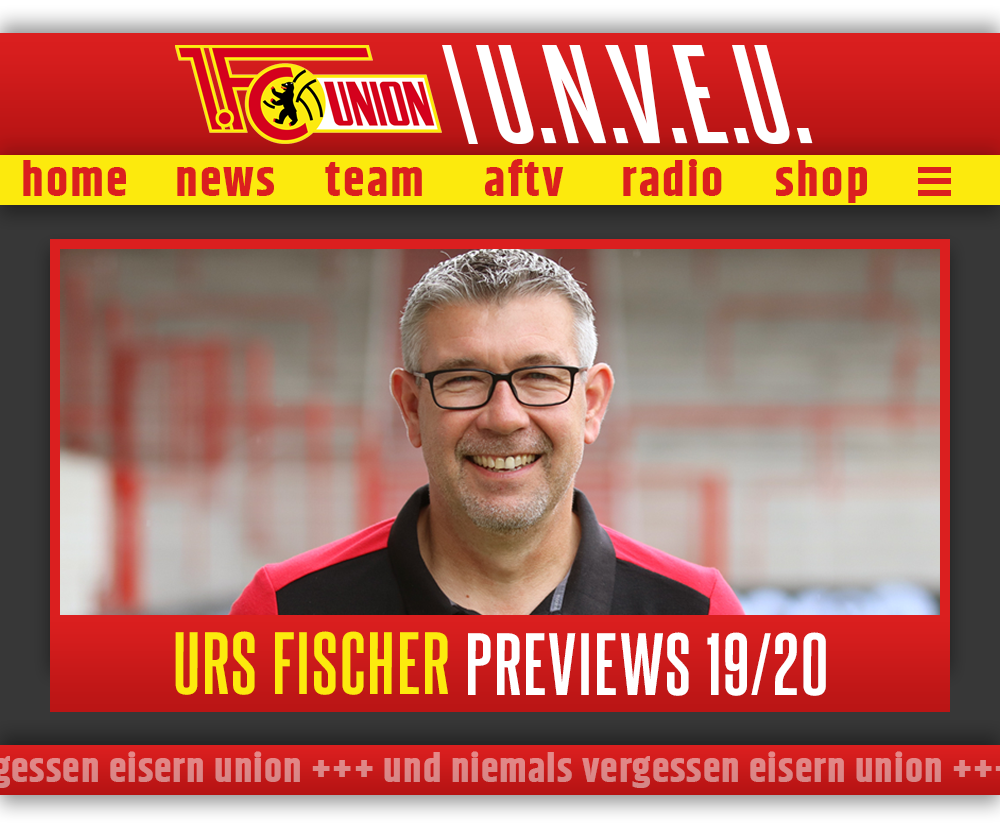 First of all, I’d like to thank you for your amazing support last season. When we were behind, you didn’t stop singing and gave us energy to keep going. When we were ahead, you were just as loud. The many creative banners and flags before matches always made us aware of what we were fighting for: the pride of Köpenick, the pride of Union. I’m sure you will continue to support us like this in perhaps the most special season in this club’s history, starting in only a couple of weeks.

I think Oliver Ruhnert (our Director of Football) and I have assembled a worthy team for this campaign. We’ve managed to keep core players from last year like our top scorer Sebastian Andersson, and added plenty of new talent such as Neven Subotić and Yunus Malli. Both very experienced and weathered Bundesliga players. I hope you will welcome them into the Union family with open arms.

Our promotion to the Bundesliga also means we have had the opportunity to further expand and professionalise our backroom staff. We have attracted a number of new scouts, physio’s and coaches, among which ex-England striker Teddy Sheringham. So you can expect our strikers to score plenty of goals this season! The added staff will help us greatly in adapting to the increased intensity and workload that the Bundesliga brings with it.

Of course, as we’re already in August, pre-season is in full swing. We’ve had a total of 10 friendly matches that gave us an opportunity to gauge new players, and to train in a different system than last season: 4-2-3-1. This formation will provide us with the most to balance between attack and defence, and in my opinion, the team is showing very encouraging signs with this system.

You’ve already been able to see that for yourself in matches against Vitesse Arnhem and CSKA Moscow at our training complex, where we won 4-0 and drew 3-3 respectively. One thing is for sure: we have plenty of goalscoring power up front with Andersson, but also with new signing Anthony Ujah. We will use the last couple of weeks of pre-season to further fine-tune our new system, and hopefully start the campaign well. But with 9 wins and 1 draw in 10 friendlies, I think we’re ready to kick off our campaign.

Also, I hope you made it through the summer well, and didn’t miss football too much. Luckily, we’re very close to the start of our first-ever Bundesliga campaign, so that waiting is almost over. I hope you’ve all extended your season tickets, and bought some new kits to wear when coming to our stadium An Der Alten Försterei. I look forward to seeing all of you in the stadium on the 18th of August!

Tango
7 months
Looking forward to see a pinch of FM being added to the story!

J_ames
7 months
Very interesting way that you're presenting this man

Actually watched the Union game the other night, I liked the raw power of Ujah, and Andersson was impressive too. Expecting to see you score a lot from set-pieces this season, as that's where Union looked most dangerous.

PS. Teddy Sheringham is an awful coach/manager, so hopefully a move to Germany finally helps him become something decent! Saw him coaching ATK in India years ago and boy oh boy was he awful.
Login to Quote

walkinshaw
7 months
great start to the story mate and i like the unique take you've take on the fm story.
Login to Quote

ScottT
7 months
Union have certainly bolstered their squad with talent ahead of what will be a historic campaign for the football club. The momentum from last season will seek to get them off to a good start, I'm sure.
Login to Quote

OneMoreGame
7 months
Really unique way of presenting your story, big fan of it! Keep it up!
Login to Quote

TheLFCFan
7 months
The pre-season seems to be going swimmingly. Great stuff, now we are ready for some league action!
Login to Quote

Zed
7 months
Tango: "a pinch of FM" is a very apt description for the story so far!

J_ames: yes, Union are a very physical team in real life. They've got the highest average length in the Bundesliga as well.
walkinshaw: thanks mate!

ScottT: these were all in real life transfers, and I didn't really feel the need to add any other players to the team. They've indeed bolstered the squad quite a lot though!
OneMoreGame: thanks!

TheLFCFan: truth be told, Urs did leave out the fact that many of the friendlies weren't against the toughest of opposition 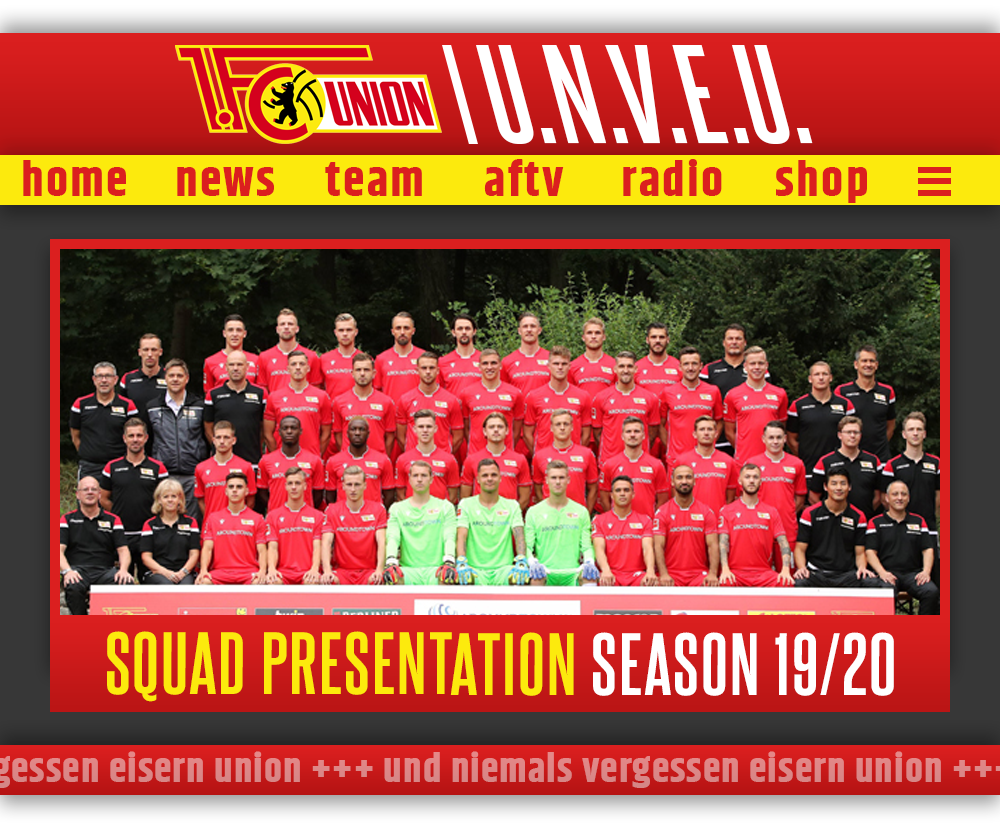 As we get ever closer to the first competitive match of the season – a cup fixture away against the semi-professional VfB Eichstätt – the Union staff have indicated that the squad for this season, barring any late changes, is complete. That gives us a perfect opportunity to formally present our fans the squad that will defend Union’s pride in its first-ever Bundesliga season.

After a strong showing last year, Rafal Gikiewicz has retained kit number 1, and it is likely Urs Fischer will keep the Polish goalkeeper between the sticks this season. However, Gikiewicz has a very strong competitor in the form of 25-year-old Jakob Busk. This former Danish youth international has been with us since 2015, starting almost 75 games for FCU. 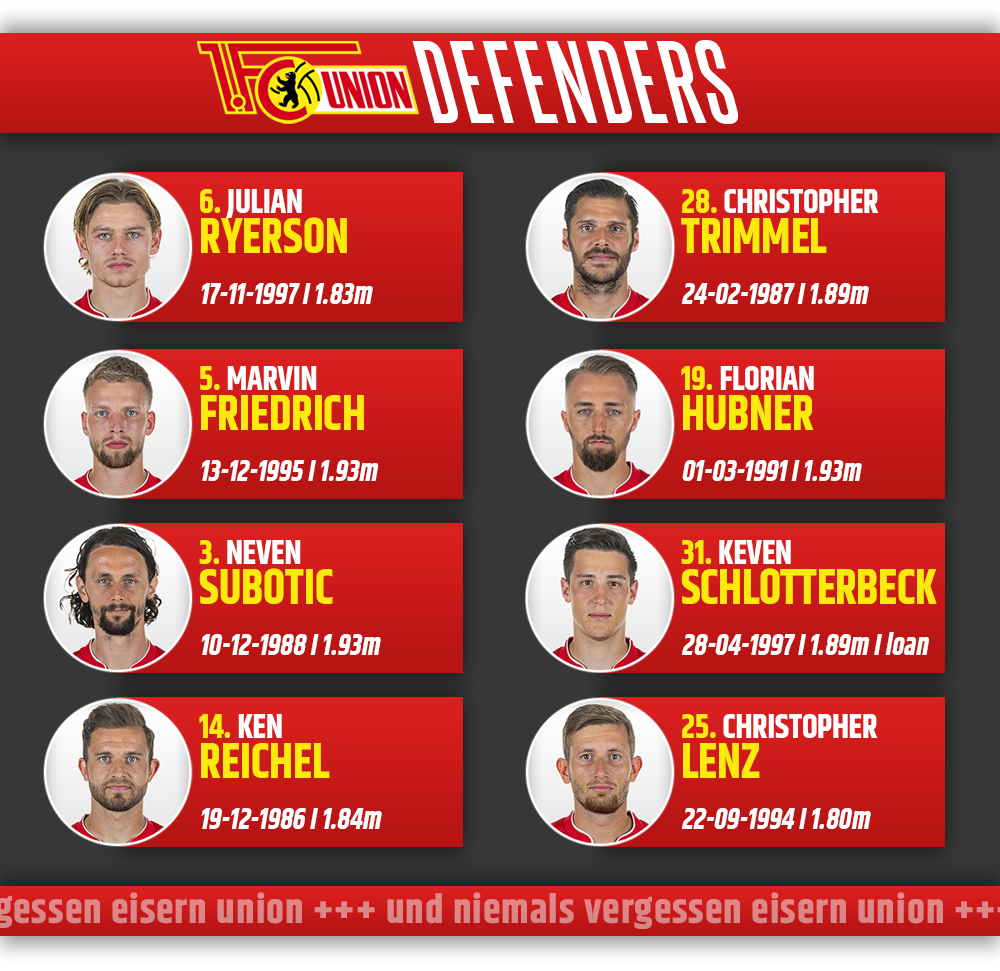 As Urs Fischer has selected the same defence in almost all friendly matches Union have played this pre-season, it is apparent he has a clear vision of who will defend our pride this season. At right-back, a very surprising name has emerged: Julian Ryerson. The Norwegian youngster seems to have surpassed long-time starter Christopher Trimmel – who has been with us since 2014 – in the pecking order.

The central duo will likely consist of two new additions. On the right Marvin Friedrich, who arrived from FC Augsburg. On the left, former Borussia Dortmund and Saint-Etienne veteran Neven Subotić. With both of these players measuring 1.93 meters, it is a commanding pairing. This would mean Florian Hübner and Freiburg-loanee Keven Schlotterbeck will be their stand-ins.

At left-back, a familiar face will likely be first-choice: Ken Reichel. The experienced left-back – who joined Union last year after a decade-long spell at Braunschweig – has so far been given the nod over Berlin-born Christopher Lenz. However, Lenz is a good left-back and will likely force Reichel to work very hard to keep his place. 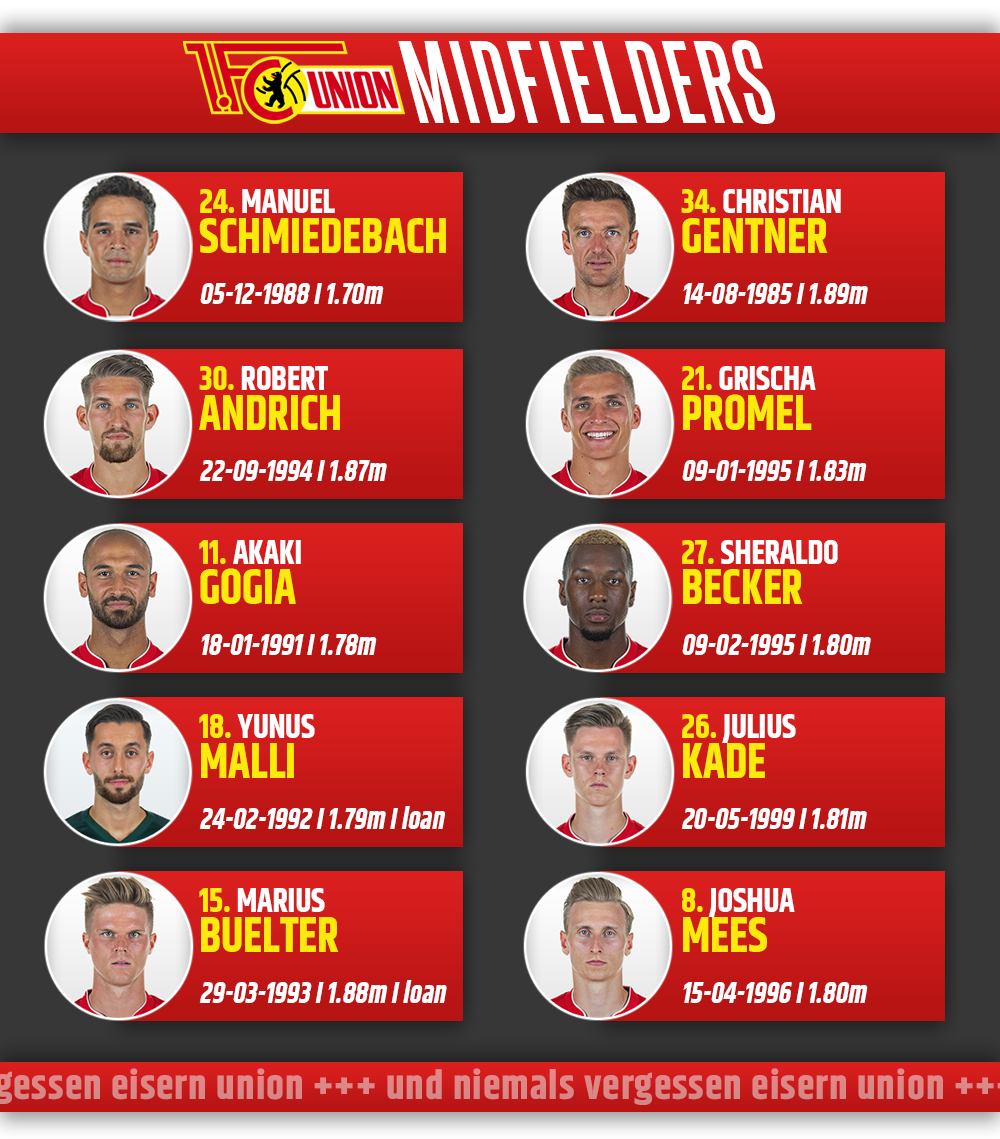 In Fischer’s 4-2-3-1 system, there is room for two physical, defensive midfielders. So far, our trainer has often selected Manuel Schmiedebach – who has joined us permanently after a successful loan spell last year – and Robert Andrich – a new signing from 1. FC Heidenheim – in these roles. Both were born in Berlin and played for the youth academy of Hertha BSC. Grischa Prömel and new signing Christian Gentner complete the options Fischer has for his central midfield.

Higher up the pitch, Fischer has a number of options. In pre-season though, his preference seemed clear: Yunus Malli – who joined us on a season-long loan from VfL Wolfsburg – has started as our number 10 almost every friendly. Talented youngster Julius Kade seems to have cemented his position as a back-up for the Germany-born but Turkish international Malli. 20-year-old Kade joined us this summer from Hertha’s youth academy.

To the left of Malli, Marius Bülter has often started in pre-season. The loanee from 1. FC Magdeburg is a skilled right-footed winger, who is tasked with both crossing and cutting inside from the left. On the right, Akaki Gogia has a similar role to Bülter. Fischer also has Joshua Mees and former Ajax player Sheraldo Becker at his disposal on the wings.

Although Union paid about 2 million for new striker Anthony Ujah, it is unlikely the Nigerian will take over the position of Sebastian Andersson as first striker of FCU. The Swedish international was instrumental in our promotion last year, scoring 12 goals and giving 6 assists in the 2. Bundesliga. However, Andersson knows that a period without goals could see him lose his place to the prolific Ujah.

Tango
7 months
I know some of the players there, the squad is not that bad and you have enough manpower to fight for permanence

That being said, I'd look for a young promising striker to sit on the bench in case one of the two options picks up an injury
Login to Quote

ScottT
7 months
Andersson scored plenty last season to help the club to promotion and alongside recognised Bundesliga talent like Ujah and Malli, there is some decent talent in this side.
Login to Quote

OneMoreGame
7 months
I'm not entirely sure, but if this is the roster - so no new signings in the first transfer window, but I'm not sure if this will be enough for a good position.

Malli will be the man who should makes the magic in this team.
Login to Quote