ScottT
1 year
Braga again! Perhaps they have the number of Sporting?
Login to Quote 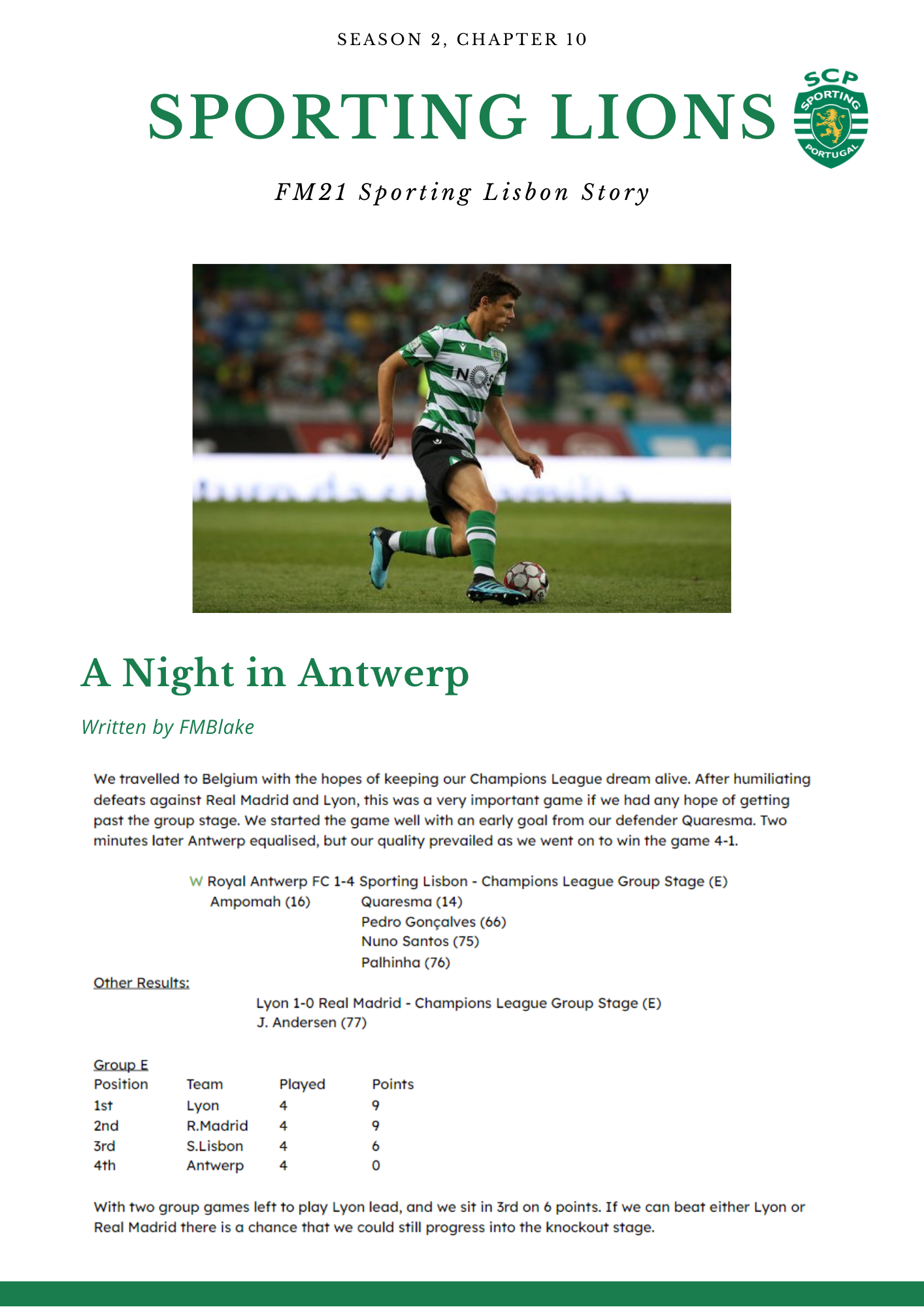 @ScottT - I reckon aye! Braga have certainly got the upper hand at the moment!
Login to Quote

ScottT
1 year
Great win. A very important win at that.
1
Login to Quote 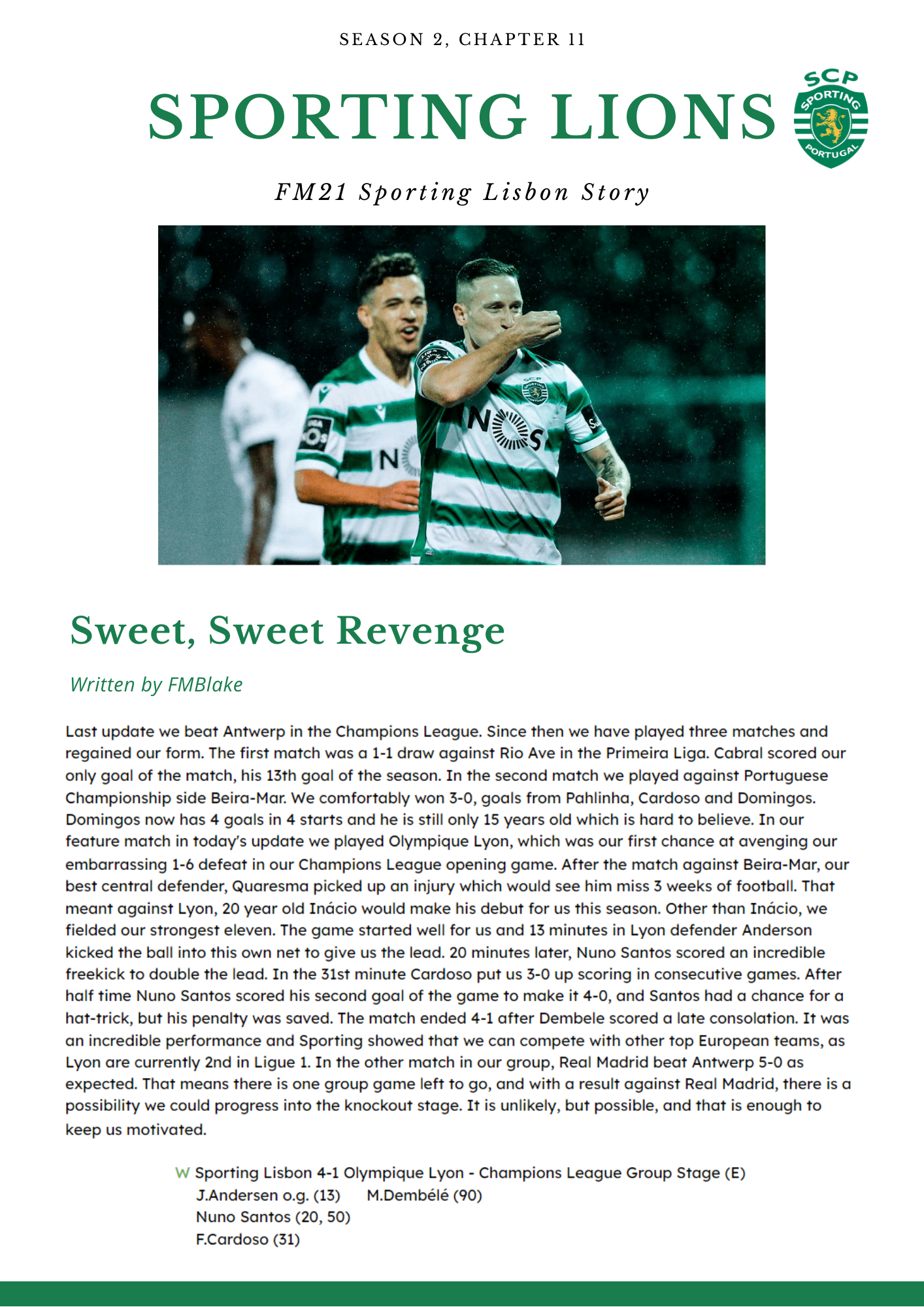 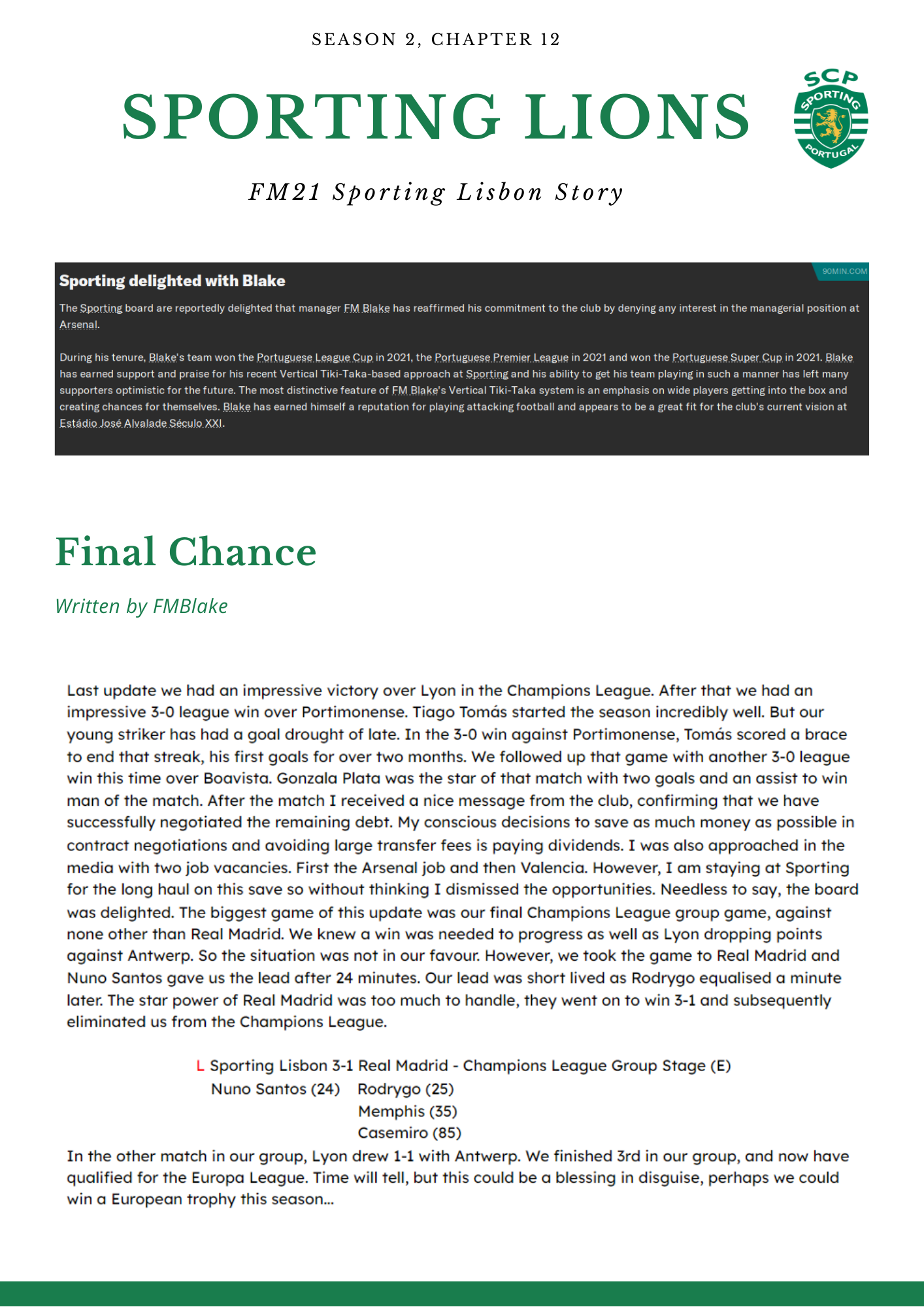 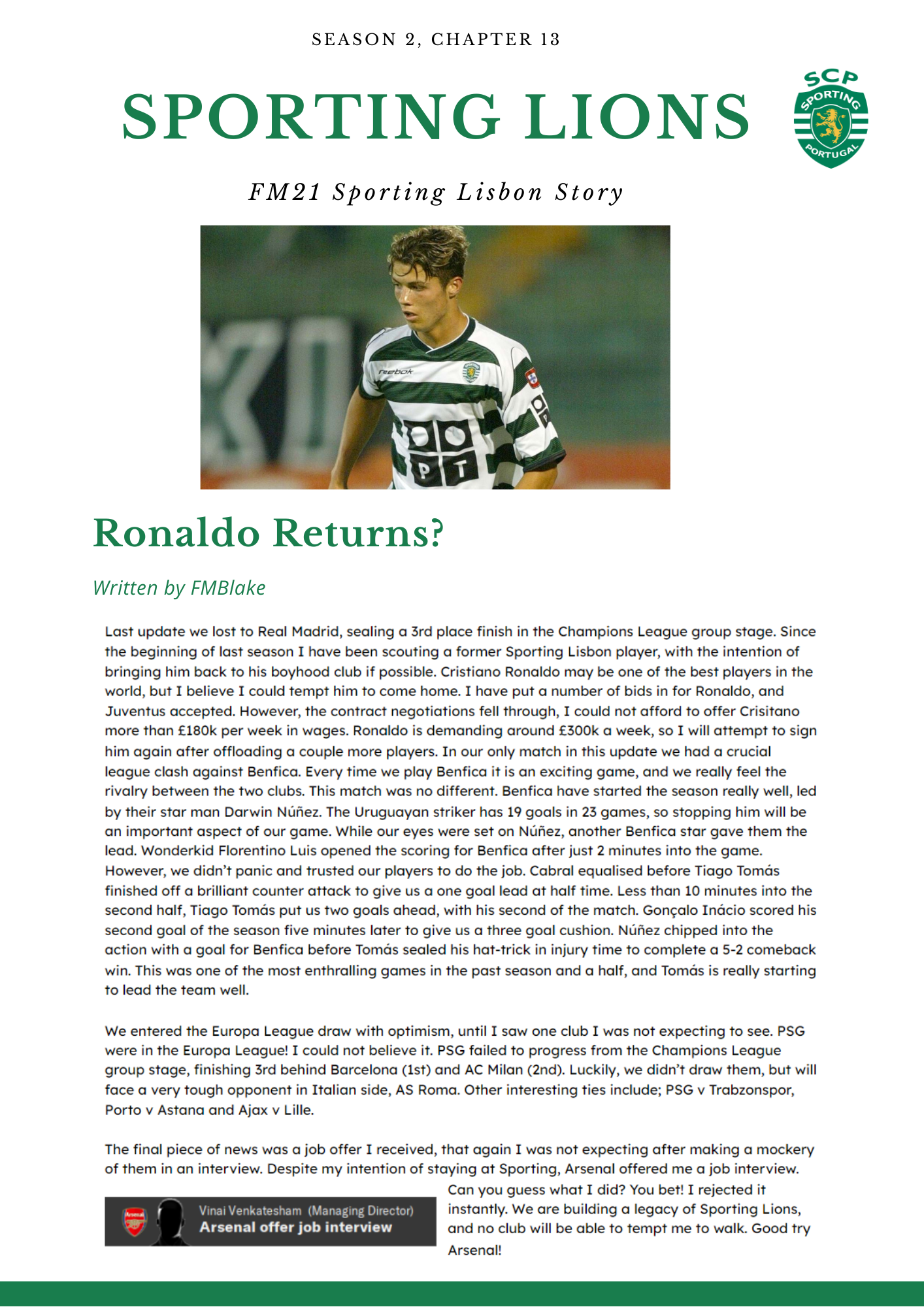 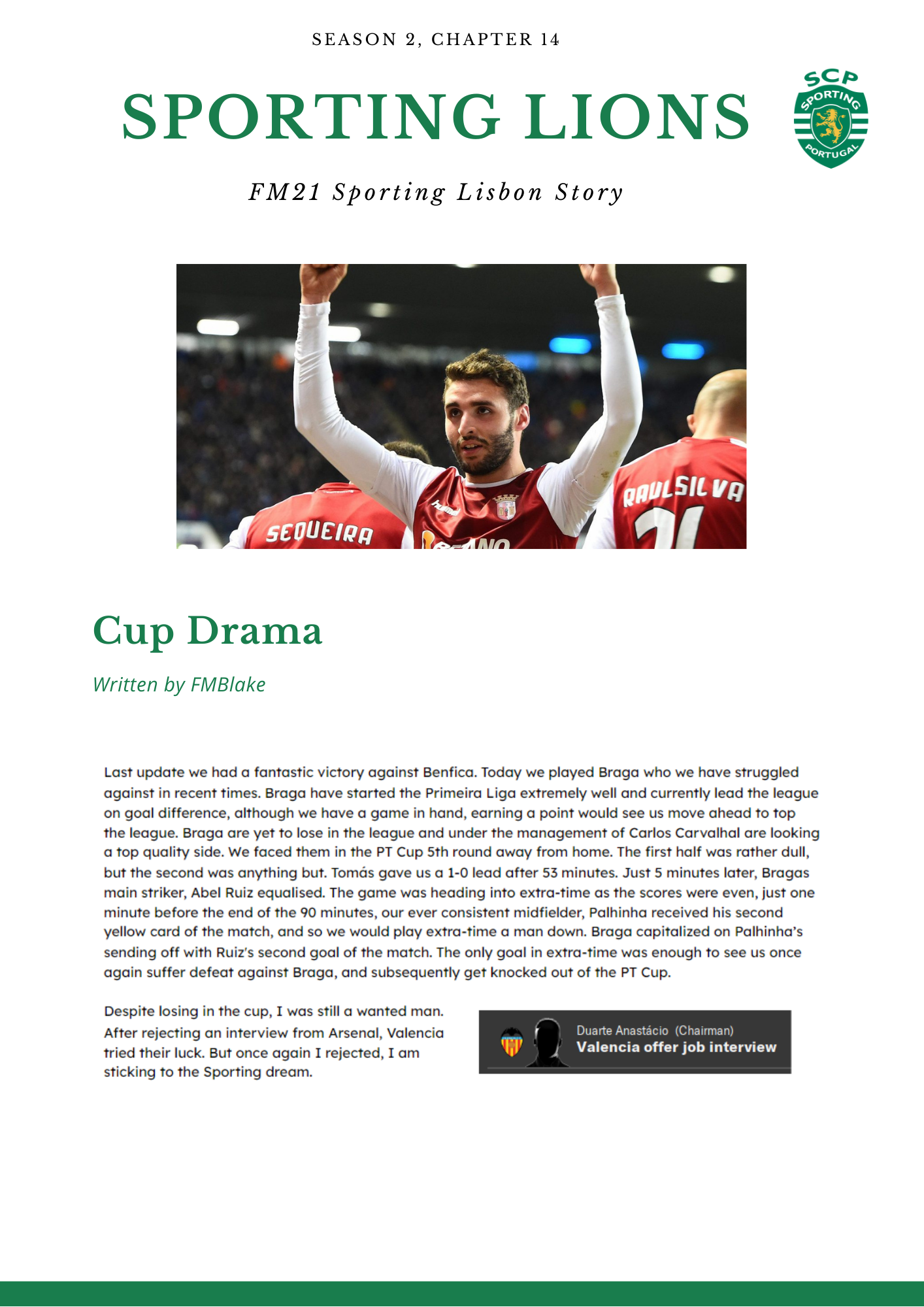 Mauve
1 year
Nice to see you stay loyal and go for the dream!
1
Login to Quote Last update, Tiago Tomás continued his hot scoring streak and was awarded European Golden Boy. A few updates ago, we came extremely close to signing one of the greatest players of all time, Cristiano Ronaldo. Today, I am delighted and somewhat amazed to announce that Ronaldo has agreed to sign a 1 year deal at the end of this current season. He will join his former club on Friday 1st July 2022. Ronaldo will be on £155k per week, but he does have a fair few bonus clauses in his contract. Even after signing Ronaldo on a pre-contract, the board increased the transfer budget to £13 million. Shandong came in from nowhere to meet Quaresma’s £41 million release clause. But, luckily for us, Quaresma rejected the contract. I then promptly offered Quaresma a new 4 year contract, removing his release clause, and he signed without hesitation. We were making some great moves this transfer window.

We began January with a 4-0 win over Santa Clara. But we suffered a poor loss against Nacional da Madeira who moved up to 5th. We lost the match 3-2 in the last minute, so it was a bitter pill to swallow. In more transfer news, we sold Brazilian, Bruno Tabata to Fiorentina for £15 million but 90% of the fee went to Portimonense, therefore only £1.5 million was added to our transfer budget. In the league we returned to winning ways with a win over Moreirense 3-0. Tomás scored a brace, the 19 year old now has 22 goals in 24 games this season and continues to be one of the most lethal upcoming strikers in European football.


Although I am building a fully Portuguese squad, I will still look for transfer deals that we can turn a profit on. Croation, Toma Basic agreed a contract as his expires at the end of the season from Bordeaux. He is a player who I will look to sell in a season or two to make more money for the club. In our next match we beat Arouca (top of second division), 3-1 in the Portuguese League Cup Semi Final. Tomás scored another brace, he now has four in his last two games. We will play FC Porto in the final. A repeat of the league cup final last season in which we won 2-0.

We faced Porto in the Portuguese League Cup final, just three days after the semi-final. With a number of players fatigued, as well as Nuno Mendes and Palhinha out by suspension, we made a few changes to the starting eleven. Tiago Tomás opened the scoring for us after 20 minutes, but our lead was very short lived as Porto’s 21 year old Fábio Vieira equalised just three minutes later. Just three minutes later, Nuno Santos put us ahead again, but Marega cancelled out Santos goal before half time. Going into the second half, the score reflected an even game and it was 2-2. Both sides fought and created chances in the second half, but it was Porto and Viera who would finish the game off in the 89th minute. Porto won the match 3-2 and so we failed to retain the Portuguese League Cup title.

The loss against FC Porto hurt, and we seemed to still be licking our wounds when we played our next league match against 6th placed Tondela. We lost to Tondela 2-1 after taking a lead with only 15 minutes left to play. This was the first time we suffered back to back defeats all season. However, we managed to turn our poor form around with a solid 2-0 win against bottom placed Farense to end January with a win. We currently sit 3rd place in the league, just 3 points behind leaders Benfica, but we also have a game in hand, so could go equal top with a win. Now with just a few months left to play in the season, we only have the Primeira Liga and the Europa League to compete in. Two trophies that if we won would conclude a successful season. This is our goal now. To win at least one of those two major trophies, if not both.
Login to Quote

TheLFCFan
1 year
Wow, that Ronaldo signing is both impressive and surprising and even at his age I am sure he will provide you with some incredible quality. Nice to see you earning some recognition from other sides trying to sign you up but good to see you stick it out at Sporting!
Login to Quote

You are reading "Sporting Lions: FM21 Story of Sporting Lisbon".